Miles to go before I sleep IX – Back to Kasol 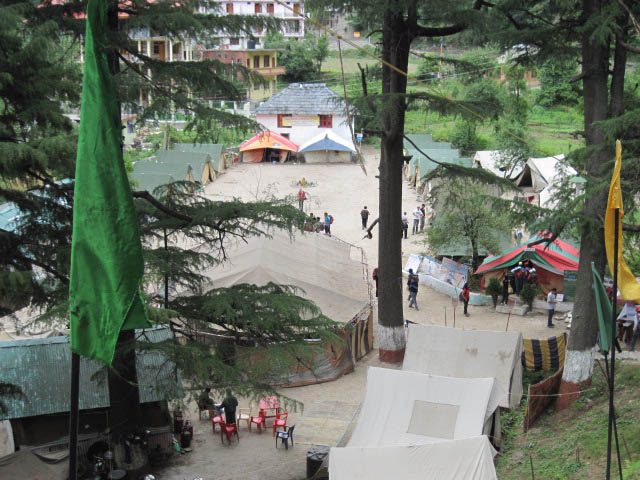 Day 10:
Return to Base Camp


Woke up that day thinking we are returning to base camp today. It was mixed emotions. You don’t want to leave the mountains but you want to return back to civilization too and have a bath (It had been 6-7 days since last bath 🙁 ).
I remember having noodles for breakfast that day. We formed our lines, took the counts(Our number significantly reduced since many people had left the previous day) and we set off again, chatting, laughing, joking, the usual. We met some locals on the way, there was a man who had his baby tied to his back, saw some animals. One moment Naveen would be behind us and next, he would have reached ahead of us due to his superb trekking skills :). And walking along, we finally reached some civilization.

We had to walk through it to reach the Barshani Road head. I found walking on the roads irritating, I preferred the uneven earth. We were too tired by the time we reached the road. The plan was to travel via bus to Manikaren (17km) and then trek to Kasol Base Camp (5km). We decided not to wait for bus and booked a vehicle to take us directly to Kasol (We were too tired!). After we sat in the vehicle, about a 100 meter away was the parked bus and near it we saw the people who had reached earlier, among them Shyam, Yugi and Kalpit. I remember Shyam saying to us, “Saalo main tum logon ke liye bus chod ke yahan khada hu aur tum log mujhe chod ke jarahe ho” :D. We waved to him and left. Riding along we finally reached Kasol. Needless to say the accompanying scenery was good, but now that we had seen the higher Himalayas, this beauty looked quite ordinary :O. Its all about perspective after all.

We soon had lunch and now the temperature of Kasol felt quite hot contrary to the cold we had felt when we had come here. But then again, that journey had been from Delhi up to Kasol, and this journey was from Sar Pass to Kasol (13800Ft to 6500ft). The water now was no more chilling, it appeared normal, it didn’t leave me numb now 😀 😀 :D. Due to some reasons, we decided to check into a hotel that night instead of staying in the tent, and the others decided to do that too. We went out and met the rest of the gang in a café where the food was quite okay. We found a nice hotel and Nikhi and I checked into a room while the guys checked into the others in pairs. Amar decided to leave that day itself to Delhi after collecting her certificate. We went back to base camp for the valedictory function (Fire fire camp fire) and had fun shouting the nicknames as each of us were called. Only our group (nicknamed the tent 14 gang) was left for the function. Culprit gave some thank you speech and my name was spelled wrong in the certificate :(. Mithun Sir corrected it and gave me a new certificate and told us to add him to the Sarpass group that we would create for our batch :).

10 days back we had come here with with expectations and hopes and of not knowing what exactly we would find. Now we had returned back, triumphed, having Sar-Pass-ed successfully (Well that’s not the right word but I like to use it :P). The trek met my expectations more than ever, except for a snow fall :(. But probably, next time I would experience it. Oh yeah I want to return back again to do it  again and again and again:). I have fallen in love with the mighty Himalayas, its pure and unadulterated beauty, the delicious water (though the water taste of Belgaum comes 2nd, which I always loved is now replaced with the taste of the roaring Parvati river), the joy of walking through the mountains and the snow, not a care in the world, the awesome friends I made there in such a short span of time whom I will cherish forever :), and as Calvin says, having made my knees green daily so that I need not re-examine my life 🙂 🙂 :).

That ends my tale of Sar Pass trek but the journey doesn’t end here, I have an epilogue left in which I am going to bore you with my love for Kasol :P, so bear with me a little longer :P.