Miles to go before I sleep II: Up in the Himalayas 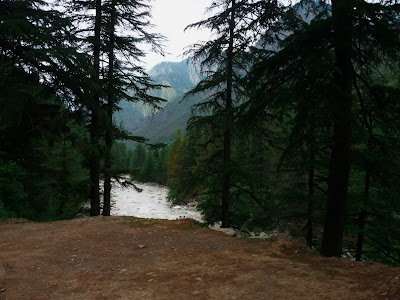 Kasol (Contd…)
All the girls were assigned to tent 11 but we were the 1stto arrive. We were soon joined by next character in this trekking tale: Amardeep. Nikhi and I had planned to go river rafting or para-gliding that day as we had the day off. But since river rafting involved dipping in water and as we were prohibited from doing that that day, it had to be cancelled.
Since we had crossed breakfast time, we had some weird parathas in a small inn next door and Amardeep set off to Manikaren. Nikhi and I were still deciding what to do and finally set off to Manikaren too. We went in a govt tourist bus and the conductor didn’t take any money from us. One thing I regret is missing out sitting on the roof of the buses L. Hopefully will do that on the future. The roads of Kasol are very narrow as it is at a height of 6500feet in Himalayas. Most of the times only one HTV can pass through it. The people driving through there do a superb job with a untold mutual understanding of stopping and letting others pass :). Only once did I see a traffic blockage there but more on that later (Gawrsh… I am sounding like Teb Mosby of How I met your mother narrating stories). Anyways, we reached Manikaran and saw the Gurudwara. It was pretty crowded. We clicked some pictures of the surroundings, of each other and a dog :D!

As we waited to board a bus it started raining. I don’t remember how heavy it was but as we saw on reaching the base camp that the snow on the Pin Parvati mountain peak had considerably increased in the evening (I forgot to mention we could see a snow capped mountain from our Base camp 🙂 whose name we learnt the next day). In the bus we met Amardeep and we got down at Kasol market where we went to a bookstall ‘coz the shop name was in Hebrew. Kasol has a lot of Hebrew written all over for the loads of Isrealis who come there. I think after we reached base camp it rained heavily and in the evening, we saw the increased snow on the Pin Parvati mountain top. The temperature dropped and  I wore a sweater after years( I hate sweaters). That evening we participated in the electronic camp fire of the SP 21 batch by chanting “Fire fire camp fire”. This was the only thing that was a bit lame. After having hot cups of bournvita, we went to bed. Oh I forgot we had earlier collected rugs,inner sheet and a rucksack.Tried to sleep on the bumpy ground covered in socks and gloves(I don’t remember :S) and we were joined at night by some more tent mates from Mumbai. BTW they follow army like timing and the bulb in the tent goes off at 10.  So you can imagine what  a mess it was for everyone to settle sown in torch lights. The other members of the girls’ tent was a [Bengali] aunty (I still don’t know her name ) who always occupied the corner and 3 [Gujrati] Bhabhis who were cute to talk to.
Day 2:
Woke up early, maybe 5.30 with sounds of a trumpet probably(I really don’t remember those details now L). We ran (mostly walked) maybe half a kilometer to the exercise ground. Here we did some exercises with the SP 21 group. Among the guys who taught exercises was Laxman Sir whom we saw directing the blocked traffic once. We learnt that he was in the traffic police there 🙂 . I don’t remember the other Sir’s name L. After that we had breakfast and we bid farewell to the SP 20 batch. I took the video of the group leaving for a uncle who had asked me to do so. He had spoken to me at the mobile charging point. The charging point was where people told stories and rumours they had heard about the trek :D. I heard of a story where 1 guy  of SP14 batch fell in Nagaru after reaching the top due to his stupidity and they wasted 6 hours searching him in the snow. The returning batches gave tips too :D. So back to what we did. We went for the acclimatization walk in a single file with the girls leading the way. Two dogs accompanied us of which 1(whom we later named Pintya- charater 4) was to accompany us throughout the trek. The dogs knew the way and guided the ones at a loss for direction.


Enter two more characters who introduced themselves as Sandeep and Sumit.(I had a hard time recalling these names 😀 as they later became Pradeep and Chatur). 😀 Don’t ask me why. In the end all had nicknames! After we reached the resting point, Amardeep took a nice nap on a stone while Nikhi and I went to the river. Now when I remember it, it makes me laugh. En route we got confused with the way as we saw some mules grazing. So we turned back then were joined by some other people from our batch and taking a long route reached the river. While coming back took the shorter route where the mules were and by then one of the sirs came to see where we were lost. Hehehe.
Reaching back to base camp we had lunch (The food there was so much more delicious than what we get in our cafeteria in office). The water there was ice cold and taking a shower felt like the water was taken out of the freezer. It leaves you numb! Later that day, we had the orientation where the Field director told us all we needed to know. He said we would not be taking a bath now from the time we went to higher camp to the time we came back to Kasol i.e., 6 days :O :O :O!!! Our jaws dropped too to the ground and due to the non-concrete ground went an inch or so deep in the earth! He also told some interesting tales of Manala and the history of Manikaren and about Pin Parvati mountain, its 2 peaks being Paap and Punya. We all introduced ourselves and I remembered very few names in the end. But atleast now the faces of our batchmates were known. We had a Keerthi and Kirti in our batch. Funny thing I remember about that was at the end Nikhi said to me “Both Keerthi’s look so similar” and I said “Which 2 Keerthis? There is only 1 Keerthi”.  Neither did we know then what a superb photographer he is nor did I have any idea how difficult it would be to get photos from him later :S
At tea time, Kalpit(who was obviously gonna become Culprit) the cultural leader along with Ashwyn came along asking if we knew to sing. I told Nikhi was a good singer and these guys asked me to sing as well. I told them if I sing people are gonna jump in the Parvati river next to the base camp, I after all have such superb singing talents :D.
Evening we went out to Kasol village to buy some stuff. I had no idea then how much I was gonna love that place. It’s a beautiful village :). We met some more batch mates then and after dinner it was our turn to perform the cultural event(fire fire camp fire). Along with Nikhi’s solo we sang a group song in which I did lip sync. Keerthi began the event with a nice classical song (will check with him regarding the song and update it) and Chatur told some PJs one of which was on the Field director(Hau) 😀 !
Day 3:
After the exercise with SP23 batch, we had rock climbing at which I was terrible but it gave us time to know our batch mates better who were now our friends. By now we knew Shyam(another awesome photographer) who would later become Sherpa :D, Naveen who we later saw was as good as a mountain goat while climbing :), Nirav who became Ghajini 😀 , Jai Kanth,  Rajnikanth uncle, Pranav, Manju, Sudhakar, Yugi, the Mumbai gang, the group from Gujrat etc. Now we had lunch in groups with the new friends we made and one of us kept watch whenever we got hold of a charging point. In the afternoon we had Rapelling which I loved. Evening again was spent in Kasol buying poncho and stuff after we handed extra luggage. I struggled to reduce my rucksack weight (I had taken too much stuff 🙁 ).
After dinner was camp fire organized by SP 23 batch.
We went to bed that night thinking that tomorrow we are leaving for higher camp :)!
Thats all for now folks 😉