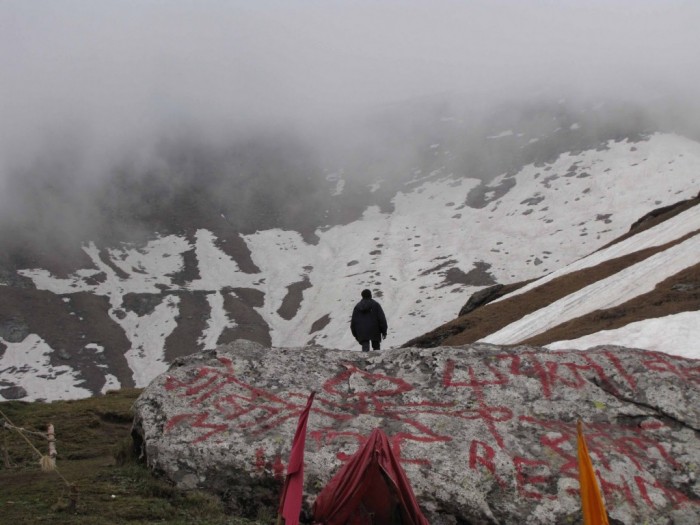 Reaching for the clouds 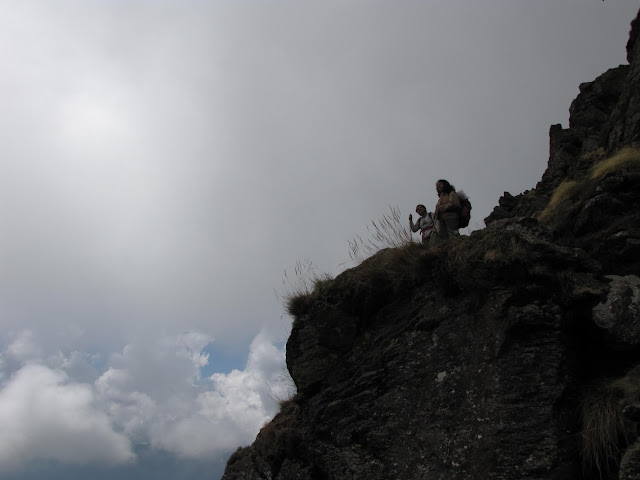 Day 7:
I used to usually wake up early and so I did again. There was a small stone from which I could enjoy the beauty of nature. I sat there mesmerized in the beauty for a while. I turned around and saw some other early risers,
a couple of them sitting and chatting and there was Keerthi photographing with his camera mounted on his tripod. He and Ashwyn did night outs and captured some photographs of the stars.  There was Naveen peeping out of his tent, lying down and capturing photos from his lazy point. Soon some more people came there we talked about for a while and then it was time to go again. We formed the lines, took the counts and started off climbing again. 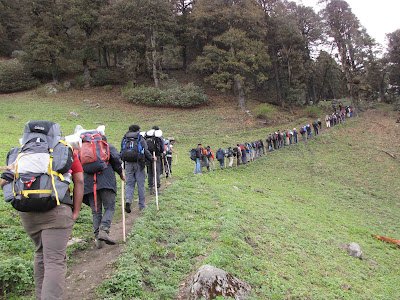 And so it begins
One of the guides carrying the luggage was a very pretty lady and her outfit was very cute :). She carried atleast 4 times the load we carried yet walked faster than us. As I chatted with her, she said it was her 1st time through this route too. I asked her how does she manage to walk so fast with all this load. I asked her “Aap thakte nahi hai kya?”. She gave me a very sweet answer, she said “Aap bhi toh padhai karne se nahi thakte”. But I feel people in these mountains really enjoy life more. Today’s climb though short was steep and the degree of the mountain was 70o to 80o. The climb was mostly zig-zag and we soon reached the lunch point. Here Nikhi caught some signal on her mobile. We had heard that at Nagaru we would get network (after all its at 12500 feet) and so we did. After some maggi (oh yeah those people were there here too 🙂 ), we set off again. 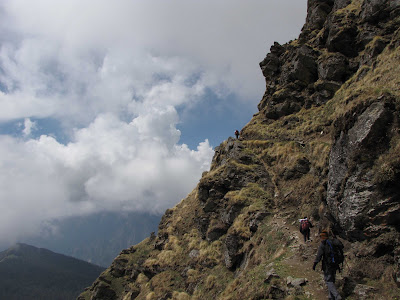 After lunch, we set off again
We climbed and climbed getting small dirty patches of snow here and there. Finally reached the camp site. We reached early by 3 or 4. Sunset is early at Nagaru and the scheduled sleeping time there is 6PM. We had heard some alarming stories about this camp site that due to high winds, sometimes the tents fly away and people are left holding on to tent poles :O. Someone had advised not to sleep near the end of the tent towards the mountain as the wind is more there (There were some other jokes regarding this but let me not mention it :P). You had to be careful when you went to do any activities since there was more chances of slipping and falling on the slopes and the snow. We had our usual roll call and one of the guys came a bit late as he was attending a call (you know which :P). The camp leader here was a little strict(which was necessary in those conditions) and he almost told this late comer to return back to base camp :O 😀 :P. Things got normal after that(i.e., if you call shivering in the cold normal :P) and he gave us the usual instructions. Here the water was available only as long as sunlight was available since it was melted snow(under sunlight). So he told us to stay away from the snow for certain activities. We were now covered in clouds (Oh yeah you can touch the clouds 😛 ) as we had expected ever since seeing this from Padri camp. 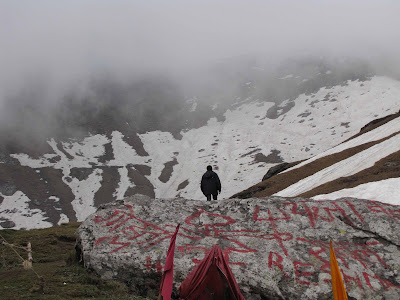 Nagaru camp
We wanted to play in the snow and wanted to make a snowman. So Sandeep, Keerthi, Kalpit and I went to make a snowman while Pranav watched from a side. As I was making it, I remembered all the awesome snowmen Calvin makes :D. We had hardly done anything when the camp leader called us off for something. Then Chatur got stuck in snow because he went in with slippers 😀 😀 😀 and Kalpit and Pranav pulled him out :D.
This is how Pranav describes it: “Are woh gaya tha ghumne (aisa usne bola) aur kahi bich me jaake atak gaya, due to his chappal…and so he called for (little) help… somehow, we managed that.. because we were all working on our snowman.. hum (as obvio.) shooe pehan ke gaye. 😀 extra lakdiyaan lekar.. all was complete in clouds.. and giving him sticks, he finally came out. :D”

At Nagaru camp
We came back and chatted with the camp leader. He told us that when SP1 and SP2 batches came, the Nagaru camp site was covered in snow completely and they had to turn back to base camp without going to Sarpass. Some other batch experienced snowfall (we didn’t 🙁 :’( *Boohoo* ). He also told that the next day a guide and 2 Nepali Sherpas would be accompanying us through Sarpass. The sherpas we learned were a very strong breed of Nepalis who could carry even 2 humans on their shoulders :O :O. Our Sherpa, Shyam was very eager to meet the real sherpas :D. We went to bed early that night(shivering ofcourse) because we were scheduled to wake at 2 the next day, have breakfast at 3a.m(or 3.30am) and set off at 4am on the snow in torchlights!!!
So we got zipped up inside our sleeping bags(the temperature that night was 1o or 0o celsius) awaiting the day we would cross Sarpass(as this trek was called) looking forward to the big adventure. Little did we know that there would be a mis-adventure waiting someone too!!
P.S: Yay I finally managed to write a small post but the post on Sarpass is probably gonna be the longest… 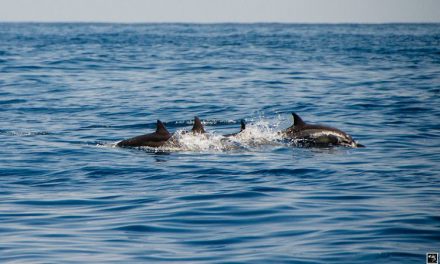 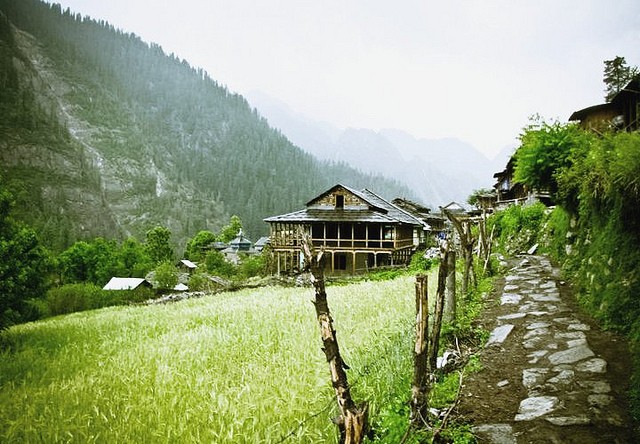 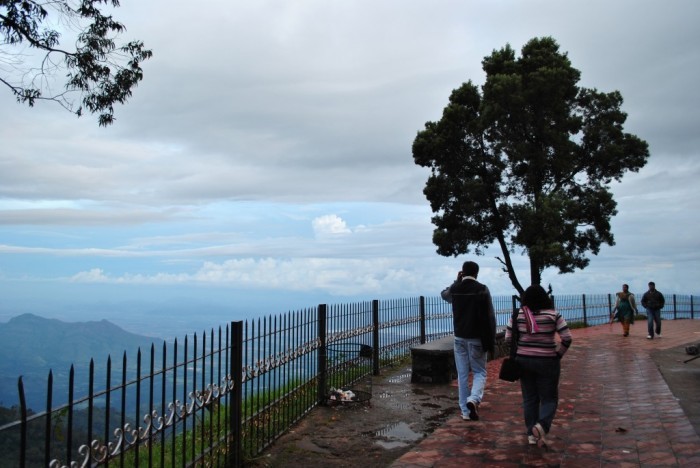