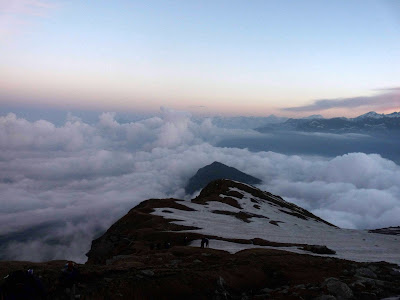 Finally the day(night actually) arrived where we were to set out on the Sar Pass. I woke up all dizzy and unsteady that day. Our tent was on a slope and all the blood had rushed to my head as I slept. As I woke up the world revolved around me. I went out and told the camp leader about it. He told me to have breakfast and then he would decide if I should continue. I was determined that come what may, I am going to continue going further. 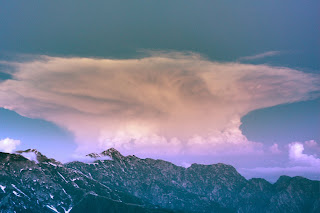 We all got ready and I walked along with Naveen and Keerthi(both of whom were strong trekkers) and they became my guardian angels for the day :). They were both extremely patient and walked slowly with me allowing me to rest as we set off at 4am that day, over-clothed to keep away the cold, with  torch lights in hand, walking on the snow with the Sherpas(Nepali sherpas) leading the way. As we moved along we got our feeling of snow and walked along. Soon we were slipping and sliding (atleast I was). The reason for the early start that day rather than the usual 8am(or 9am in case of the day we set off for Nagaru) was that we had to cover the snow before the sun came out. Because after that, the sun starts melting the snow and the foot slips. 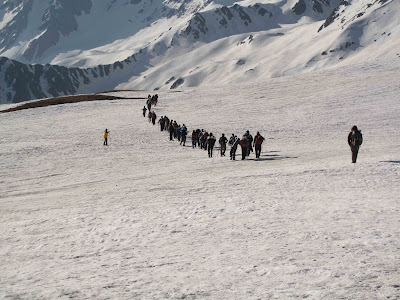 We walked in single lines(Pic by Naveen)
We walked in a single file and we were instructed to put our footsteps in the same places where the guide had put his. They know the way best and it is important to follow this when walking on snow since you cannot predict what was below you. As we walked we were awestruck by the beauty, we saw the sky had some orange clouds (write type of clouds here ) and yeah, now we were above the clouds 🙂 🙂 :). The feeling is awesome, over-whelming :). On and on we walked. Today Sudhakar, Manju and Shyam had volunteered to come last. Soon people were slipping and falling on the snow and so did I. Each time one of the Sherpa guides helped me up and he was a really nice guy. I fell a lot of times that left certain parts of me numb and cold! We finally reached the part where it was all snow (clean snow 🙂 ) and the guides gave us some time to enjoy the beauty, photograph and play in it . 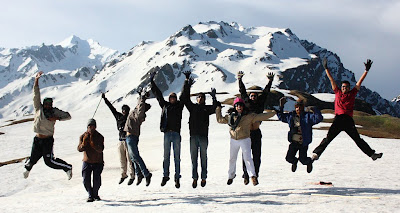 One of my favourite pics of the trek. Clicked in a single shot by Keerthi and planned well by him
Some history before we continue: As per the local accent, Sar means a lake and while trekking, across the route from Nagaru to Biskeri Ridge, we have to cross a small frozen lake known as Sar. Hence this destination named Sar Pass (which also happens to be the name of the trek).
So back to where we were.  We clicked crazy photographs, Naveen did an awesome single hand somersault, I poked my wooden stick in Pranav like a spear and Keerthi directed and clicked an awesome photograph. Off we went again with hopes to cover maximum snow before 8am. As we walked I slipped a lot of times and fell. I remarked to the guide that I was falling many times than others he said “Par barf pe girne mein toh maza aata hai na madam :)”. Now when I look back I am glad I fell so many times, it was a nice and different feeling (but numb too), but that was the only day I could experience that :). And I enjoyed myself tremendously :). How lucky he was that he could play in the snow every year!!!! As the guide helped me cross a particularly slippery bit of snow (I still hadn’t got my footing on snow) I said to him “Aap bhi sochte honge hum kahan se aate hain, hame toh barf pe chalna bhi nahi aata” to which he replied with a smile, “Aap log aate hai toh hame kaam milta hai”. Thus chatting with him, we reached the resting point where we had lunch(which was some of the rock found amidst the snow). Today’s lunch was something different – some biscuits and other high calorie snacks(The daily food was high in calories too. We were advised throughout the trek to have liquids and sweets a lot). C’mon you can’t expect to be given parathas at 4am in the morning. Maybe I haven’t mentioned this before – the camp leaders, sirs who teach rock climbing, cooks etc are volunteers :). Hats off to these people, who stay there in the extreme cold so that we can enjoy the 5-star trek. All you pay for the trek is a mere 3050 Rs!!! 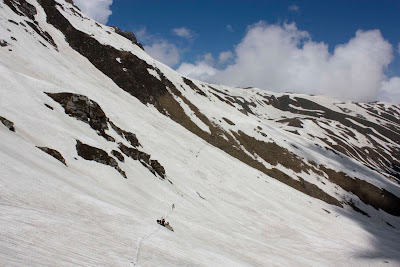 View from lunch point after having walked this part(the faint line that you can see is made by our footsteps)
After everyone reached the lunch point, we set off again eagerly to reach the surpass sliding point from where we would slide down 80feet in the snow!!! Some of the first batches that year who had started in 1st week of may had a longer sliding distance due to the presence of more snow (A lot of snow had melted for our batch which was at the end of may). We heard that they had reached sliding to the lunch point which was probably 500feet :O :O :O (Lucky guys!!!). I forgot to mention, before we had reached the resting point, Shyam the Sherpa had climbed a small hill and slid down the mini slide. He told us it was awesome. As we went up, one of the guides came back to return the way we had come. He walked down the sloping mountain with 2 sticks :O :O :O :O :O. 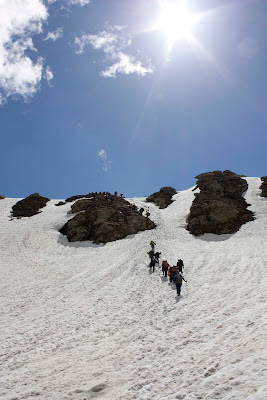 Trotting along we finally reached the sliding point which was a 100 meter away to our right. As we sat and watched the other people, slide off we realized we were on the highest point of the sar pass trek(I guess) ,a freaking 13800Ft :).  One by one our group mates slid down. After a while we set off to the place from where we slid. Soon it was my turn and I positioned myself. As the guide removed his foot, I started sliding down. It was an awesome, out-of-the-world experience (Gosh now as I write about it, I feel like doing it again right now!!!) . I slowed down as I reached where some of them stood to avoid crashing into them.

When I reached there I saw a small crowd. One guy, Aniket had got a dislocated shoulder as he slid down :(. Rajni uncle asked me and everyone else who came down if anyone knew how to fix a dislocated shoulder. Unfortunately, no one knew and as luck would have it, there was no doctor in our group. By now Nikhi had come down and she had hurt her shoulder too(thankfully it wasn’t much in her case). Aniket was in too much pain and Rajni uncle, Keerthi, Naveen, Sudhakar, Manju, Pranav (sorry if I missed out anyone) were doing their best to help him in any way they could. They wrapped his arm in crape and did a sling for the shoulder. Meanwhile Shyam was helping the other people who was behind us and he soon joined us. We still had a large distance to cover before reaching lunch point and even more distance to reach the Biskeri Thatch camp. It would soon start raining and also the snow was melting now. As these guys were helping out Aniket, Rajni uncle told me, Nikhi and Sandeep to start moving along with him. The snow was slippery and soon it started raining. A rain the likes of which we had never experienced before. It was all hailstones hitting us hard (It hurts ouch!). I walked along with Rajni uncle and Sandeep helped Nikhi whose shoulder was hurting. Walking in that hard hitting rain is horrible, especially on snow. The added hailstones make the surface even more slippery while the sun melts the snow. I half walked, where it was sloppy, I chose to slide since I found that easier than walking on the snow (even though I was wet and cold). 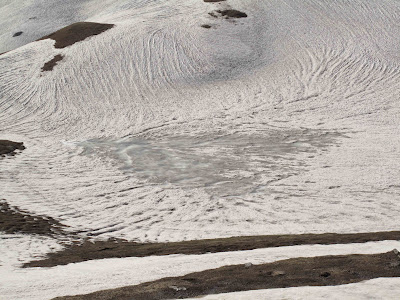 On and on we went, I still hadn’t learnt how to walk on snow and was falling very few steps. At one point I walked along holding someone’s hand so that I could cover the distance fast. We had taken a longer route (due to lack of directions) and reached the place where we could see the frozen lake while Keerthi, Naveen,Shyam, Manju, Pranav, Kalpit and the guides came along the recommended route walking along with Aniket who was walking in pain. They were giving him words of encouragement all the time because the only way out of there was walking. We finally reached the lunch point soaking wet and cold. It was almost 3PM by the time we reached the lunch point because of the misadventure.
During our orientation, the Field Director had told us that our group will be like our family during the trek. Because there will be no one else on the mountains for anything. This is a fine example for this :). Everyone was hungry and cold and tired, but they all focused on getting Aniket safe to the lunch point where they hoped some medical help would be available. These guys had a tough time due to the hailstone filled rain and they had to constantly move slowly since they couldn’t carry him nor could they allow him to rest for fear of hypothermia.  Someone had contacted ahead, and Aniket’s brother and his friends who had come ahead were waiting and they took over from there to the camp site and finally Keerthi, Naveen,Shyam, Manju, Sudhakar, Pranav, Kalpit, Rajni uncle (who was infact diabetic) could rest and we all sat down to eat maggi in the tent. We were all sooooo cold and drenched. I was shivering like anything and Nikhi tried rubbing my hands to stop me from shivering. Keerthi had a headache due to cold and hunger and I don’t remember who else was suffering from what. Finally we set off again, hoping not to hit any more rain. We had had enough of it.
Nikhi’s shoulder was still hurting and she still had the cough as we moved on from lunch point to the camp site. She, Sandeep, Shyam, Pranav, Kalpit were all coming chatting while Keerthi made me run a lot as he, Naveen and I went ahead chatting. Oh yeah, Keerthi was wearing his Poncho which made him look like a ghost :D. We finally reached the campsite. And got into our respective tents all wet and cold and had the delicious pakodas. It was very slippery due to the rain and many of us slipped and skidded on the mud as we went to collect water and stuff. 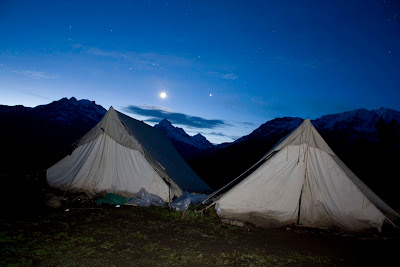 Night view of Biskeri Thatch (Pic by Keerthi)
Off we went thinking tomorrow we would be going to Bandak Thatch which is called the Switzerland of India, because of the beautiful meadows there.