We were on the Kintamani tour in Bali and after tasting an assorted collection of teas and coffee, and an introduction to Luwak Coffee at a Balinese Coffee Estate, we were ready for our next destination – Mount Batur and Pura Ulun Danu Batur.

Mount Batur (Gunung Batur) is an active volcano in Bali, lying to the north-west of Mount Agung. These mountains are considered very sacred and together with the lake Danau Batur make some spectacular scenery.

Mount Batur last erupted in 2000, and other than a few grunts and grumbles once in a while,  has been mostly peaceful. Night hiking trips to the top of the mountain are arranged by authorized operators and not joining one of those remains one of our two regrets during this trip. 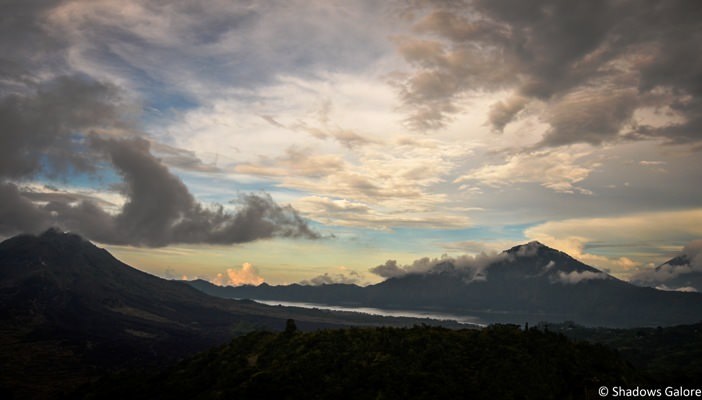 We stopped near a vantage point from where one could get an amazing view of the mountain. Rising lazily like an inverted cone from the earth, it presented a picturesque combination with the clouds flanking its top and the huge lake at the base. Though we attempted to capture the beauty in front of us with our lens, no camera ever made has been so advanced to do justice to this magnificent art work of nature.

There were not many people around except a few school kids who were spraying colours on each others’ school uniforms. On being asked the reason, they informed us with glee that their 12th exams has just got over and since they would join college, this was going to be the last day they had to wear the uniform .. 🙂 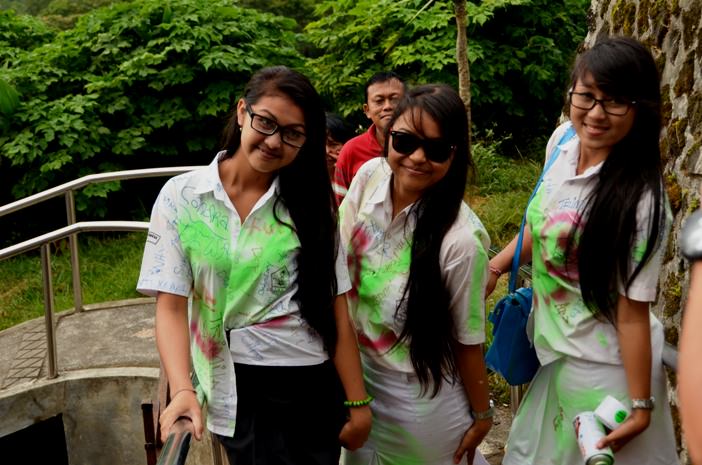 No School Uniform any more 🙂

We spent about half an hour basking in the glory of Mount Batur and then decided to go to the last leg of the trip, before starting the journey back – Pura Ulun Danu Batur (Ulun Danu Temple). As we ascended the mountains, the skies got darker and though it did not rain, clouds dominated the rest of our journey. 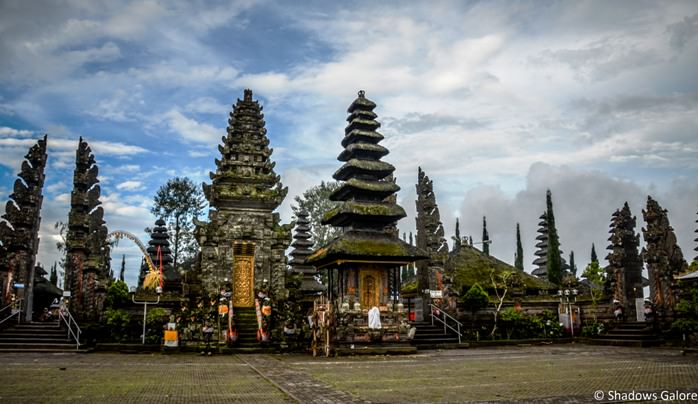 Pura Ulun Danu Batur, though relatively new when it comes to antiquity is a very fine specimen on Balinese architecture and culture. This temple is dedicated to Goddess of the lake and was moved from the original Batur village at the foot of  Mount Batur when the former was destroyed in a volcanic eruption in 1926 AD. The new Batur village was rebuilt around the temple. 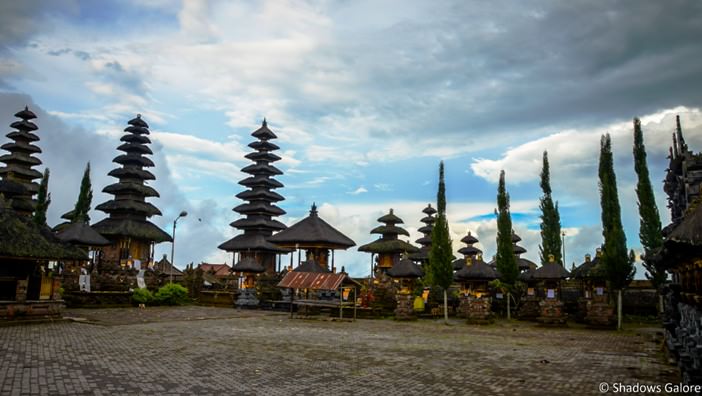 In the Balinese cosmology, Pura Ulun Danu Batur holds the Northern cardinal direction, its color is black and the god is Vishnu, the preserver, whose element is water. Like other major temples in Bali, it is a large complex of many temples, nine in total and a whopping 285 shrines dedicated to various deities.  The front courtyard is an amazing looking garden with brightly coloured idols  and beautiful bell temples. The shrines in the inner courtyard are all shaped like Mount Meru, the principle shrine being 11 tier high, a privilege accorded to only the most revered temples in Bali. There is a Buddhist temple in the complex as well, built on the Taoist philosophy and probably by the 9th century settlers who came from China so the two religions dwell in perfect harmony with each other.

There were not many people inside the temple, just the four of us and a handful of other tourists and worshipper, and this gave us a chance to experience the place in relative peace. The shrines, looked beautiful with the mountains, lake and clouds in the backdrop and it was a very soothing experience walking there. The visit to this temple remains as one of our most memorable moments in Bali.

A word of caution

The entry fee to Ulun Danu Batur is Rp 35,000.00. Wearing a Sarong is required. However once you get the ticket and try to enter, some women hawkers will try to bully you into buying a waist cloth (yes, even if you have the sarong)at ridiculous prices saying it is compulsory. It is not, and is one the many little scams of Bali. All you need is a Sarong and the entry ticket to be able to enter the temple.