Mandu – The City of Joy III 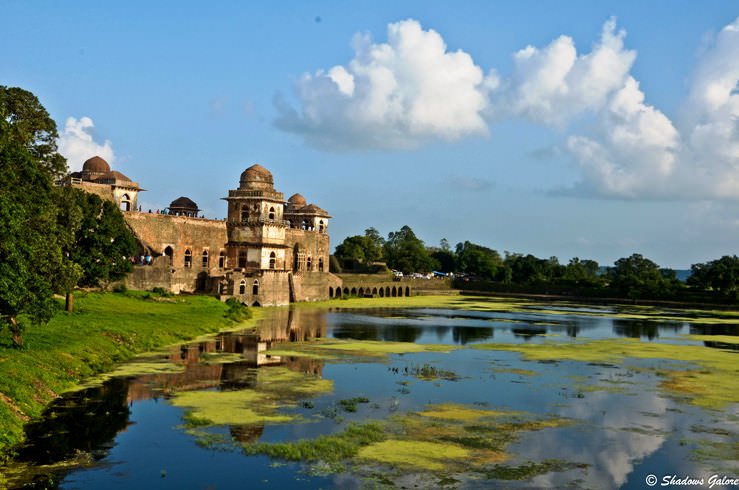 Mandu Royal Enclosure, a beautiful view of the Jahaz Mahal and Munja lake

In the earlier stories, you read our exploration of Mandu, first the Village group and then the Rewa Kund group. The Royal enclave was the last of the three groups of Mandu that we visited. We should have gone there in the morning when there is less crowd, however these group of monuments are best seen in the lights of the setting sun, so we thought of making it on the evening itself.

The place was really crowded as it was a Sunday, Numerous cars, buses and hundreds of people thronging to the place. By now, we had become a familiar face in Mandu and even the security guard recognized us, asking if we were the ones who were going to Rewa Kund in the morning on our bicycles.

The Royal enclave is a group of palaces and monuments fenced together in one complex, the most famous of them being the Jahaz Mahal. Built mostly during the 15th and 16th centuries, these monuments are great specimens of Afghan architecture. Entry to the Royal enclave is from a road adjoining the Jama Masjid. Ticket is INR 5/ 100 (Indian / Foreigner). Still camera is free and video camera are charged INR 25. Taveli Mahal, a former stable inside the complex has been converted into a modest museum displaying the artifacts from the history of Malwa. 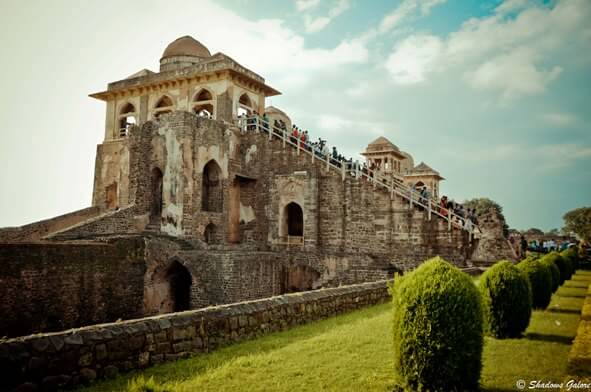 Jahaz Mahal or the Ship Palace was built by Ghiyasuddin to serve as the harem for his 15,000 maidens. The name of the palace is derived from its narrow shape like the bridge of a ship, lying between two water-bodies, the Munja and Kapur lakes. This pleasure palace must have been quite luxurious it its heydays, with big halls, cenotaphs on the upper floors and Turkish baths on the lower floor, equipped with arrangements for hot and cold water. From the terrace of the Jahaz Mahal, the view of the Munja Tank and the sun setting beyond the countryside was amazing. 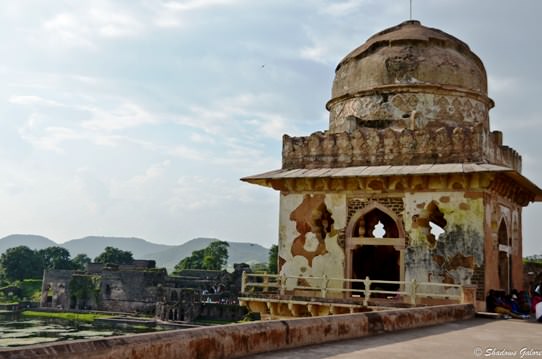 The Terrace of Jahaz Mahal 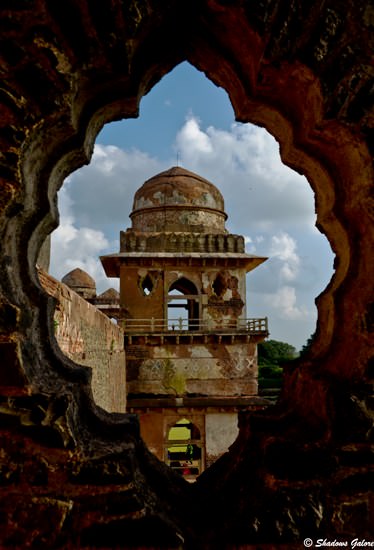 View of the Jahaz Mahal from a Jharokha 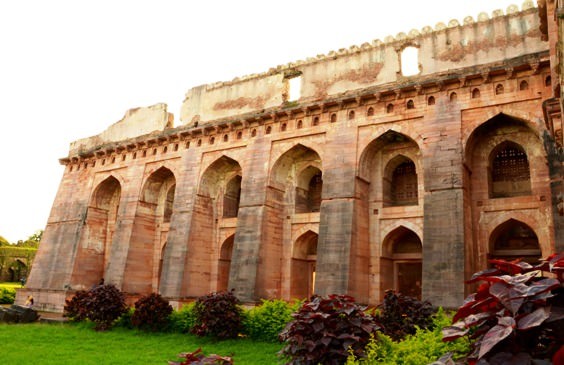 Hindola Mahal is the next big monument a little to the north of the Jahaz Mahal. Hindola means Swing and the palace is so-called because of the curious slopes of its walls. Well, we could not find much special with the walls, but the arches inside were truly impressive. Huge arches like the one we saw in Gada Shah’s shop earlier, but more in number and quite well-preserved. The sunlight coming falling on the floor and then getting reflected to the ceiling was creating a beautiful golden hue. I tried to capture this spectacle, but am not sure that was much successful. Take a look and decide.. 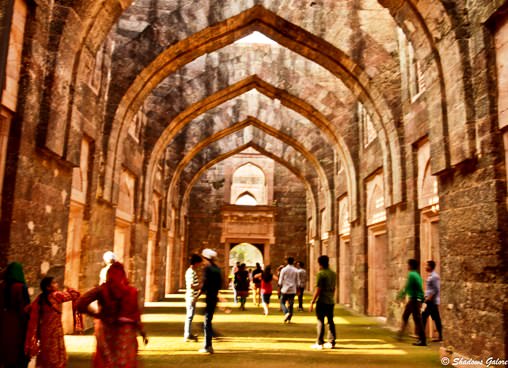 The arches of Hindola Mahal

Behind the Hindola Mahal, there are more ruins and at this place the crowd started thinning. Ancient walls covered with moss, their thickness preventing any sound of the outside from filtering in, just the two of us and not a living soul in the vicinity … it was a little eerie but I cherish that momentary solitude from the 21st century civilization. Mandu is at its most magical when all you are surrounded with is just the sights, sounds and spirits from the past. 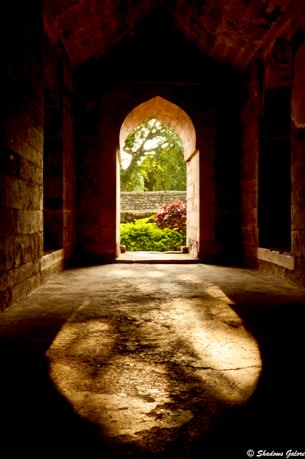 Lights and shadows from the past .. 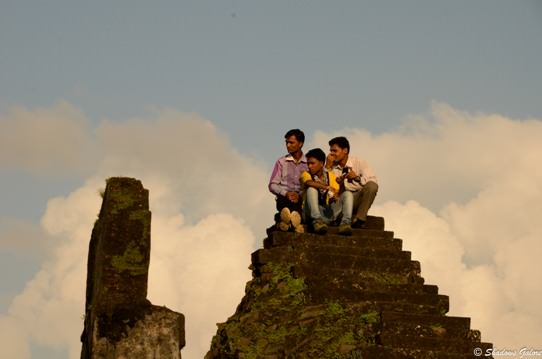 Built by Dilawar Khan in 1405 AD, this mosque is one of the earliest Islamic structures in Mandu. It dates back to an era when the influence of Hindu architecture was still a lot on the buildings the Afghans were building. This expansive mosque although in ruins, shows some remarkable wall paintings which have survived to this date. 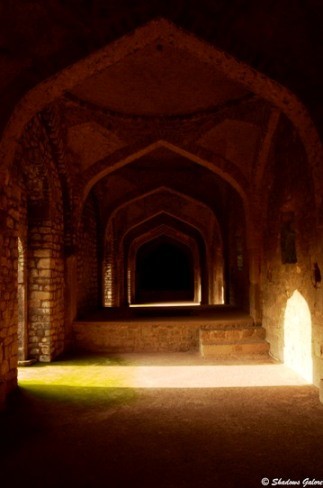 By the time we finished exploring Dilawar Khan’s mosque, the sun had already set and it was getting dark. So we decided to call it a day. We did not come back from the main gate and instead passed through the house of Gada Shah and took the back gate. A short walk through dense bushes made sure we were again standing at the Ujaala Baoli, the place where Ekta had been scared into a flight by some splashing ghost the previous day. The resort was hardly 50 m from here. 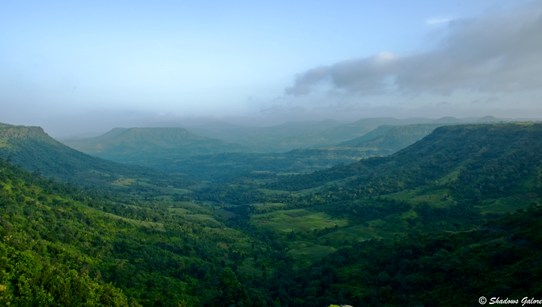 The ravines from the Neelkanth Palace

The next morning we decided to visit the Neelkanth Palace, which is a Shiva Temple which is around 4 km from the village square. We cycled through a few villages in the middle of lush greenery, some lonely ruins and on the edge of a ravine giving a beautiful view of the valley below. This temple stands on the place of an ancient Shiva shrine, which was converted into the pleasure palace of Akbar’s governor and was “reclaimed” later. So what you get is a temple built in an Islamic style, with Shiva Linga in its center and the verses of Quran on the top. Pretty interesting! When we reached there, the morning puja had just started and there were a group of curious school children standing there. A small waterfall lies behind the temple, supplying water to the building from a tank above. Like the Jahaz Mahal, here also were the curious spiral water channels through which water flows in the most interesting way. The kids showed us to put leaves in the channel and see it flow in a  spiral manner. The video below is the last memory of Mandu we have brought back with us… 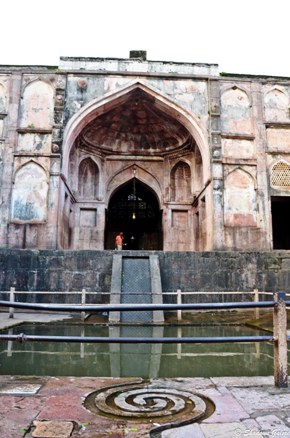 The choices to stay in Mandu are not a lot. There are three decent places to stay:

Food in Madhya Pradesh is generally delicious and Mandu is not an exception. Though there are not many restaurants, the ones available give some great stuff. As mentioned before, the restaurant at Malwa Retreat was quite good and served great veg and non veg stuff.

Shivani is a place where one must have at least one meal while in Mandu. We had amazing Daal Paaniya and Daal Bafne, Malwa dishes dipped in Desi Ghee which tastes heavenly. Strongly recommended.

For snacks and breakfast, one can go to the village square near the Ram Temple where joints like Refresh Point serve decent pohe and other stuff.

Common ways of going around are  autos and taxis which can show one around in 300-500 rupees. However, if the weather is good and you are not too lazy, I would strongly recommend that you hire bicycles and explore the country side on your own. The terrain is not very challenging and the wind in hair while savouring the beauty of Mandu is a beautiful experience. Bicycles can be hired from Sonu Bicycle shop near the village square for Rs 35 a day.