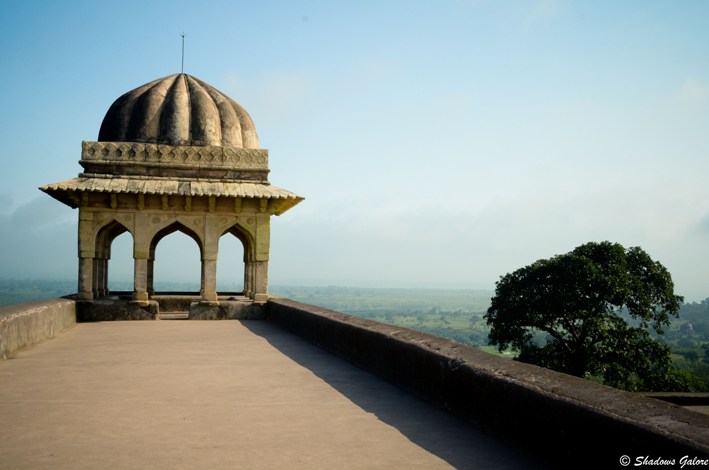 After our little adventures of the previous day, we slept like dead people. The next day we woke up early as 6:00 AM and got ready for today’s sightseeing. After some debate, we had decided against taking a cab and opted for bicycles, and it turned out to be a better experience. When you are riding on a bicycle, you tend to soak in the contours, sights and smells of the country side best. While in a motored vehicle, everything passes you by in a flash, it is on a bicycle that you are truly able to look at and observes things as they exist, of course with the added benefit of breeze in your hair. And so we cycled our way through paths surrounded by greenery, lakes enveloped in morning mist and villages with yet more friendly people, towards our first destinations of the day – the memories of Baz Bahadur and Rani Roopmati cast in stone, the Rewa Kund Group. 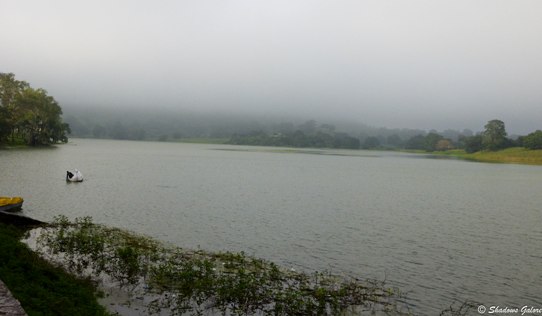 Sagar Talab, looking all misty and beautiful in the morning

The road to Rewa Kund was a pleasant 5 km  way in the middle of beautiful greenery. As we cycled, we passed through many monuments on both sides of the road but since we were determined to reach Baz Bahadur’s palace before the tourist buses arrived, we decided that we would visit those places later. After cycling for around 20 minutes, we were at the gates of the palace.

Tha bards of Mandu still sing about the tragic love story of Baz Bahadur and Rani Rupmati. Baz Bahadur was the last independent Sultan of Malwa was deeply in love with Rupmati, a Rajput singer whose beauty was famous through out the region. In 1561 AD, the Mughal Emperor Akbar sent his armies under Adham Khan to capture Mandu. The armies of Malwa were no match to the Mughal might and the fort fell to the invaders. Rather than choosing to fight till death, Baz Bahadur fled to Mewar, leaving Rupmati behind. To escape the dishonor of falling in the hands of the invaders, Rupmati committed suicide by swallowing powdered diamond…

Baz Bahadur’s Palace is located  on the foothill of the hill on the top of which Rupmati’s Pavillon sits. This residents was especially dear to the Sultan as everyday he could see his beloved going to Rewa Kund to bathe and worship. This palace is notable for its simple and elegant design, spacious courtyards surrounded by halls and high terraces offering a scenic view of the countryside.

The massive arches at the gate of Baz Bahadur’s Palace 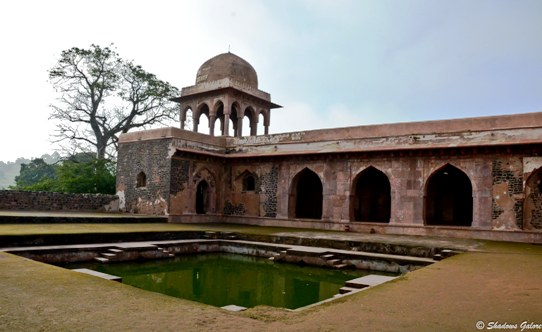 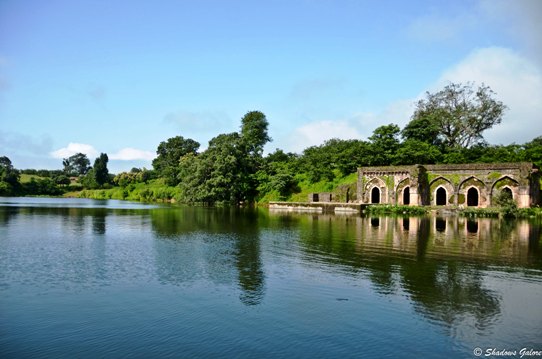 As we climbed up the steps of the palace, it was clear that we were the first visitors to the monument that day. The mighty arches at the gate reminded me of the Persepolis of Iran. Inside it was very quiet, we roamed in the corridors, took a peek at the green fields and the village from the balconies and windows and climbed the terrace. There is a small pool in the middle of the palace and its green water casts wondrous yellowish reflections on the sandstone walls. It was a peaceful and somber experience being there. 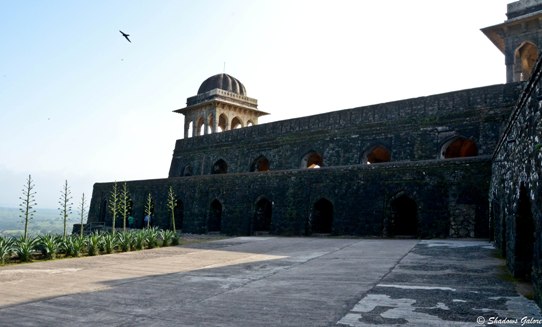 Rupmati’s Pavillon is a small hike from Baz Bahadur’s Palace. Originally built as an army outpost, this monument standing on the edge of the hill with a sheer drop of 350 m gives a picturesque view of the plains below. There were long corridors in the monument with natural lighting from above, and a reservoir of water which collects rainwater. In fact, Rewa Kund was built by Baz Bahadur to supply water to the building through an aqueduct.  Rupmati’s Pavillon has a subtle beauty unmatched by other monuments; from its terrace and domes, Rupmati used to look at the palace of her lover and her deity Narmada flowing through the plains far beyond. We spent a long time on the terrace looking at the beautiful scenery in front of us. Though the place looks beautiful during sunset, I would strongly recommend that you go there early morning. You will find a lot of peace at that time, without the clutter of tourists. 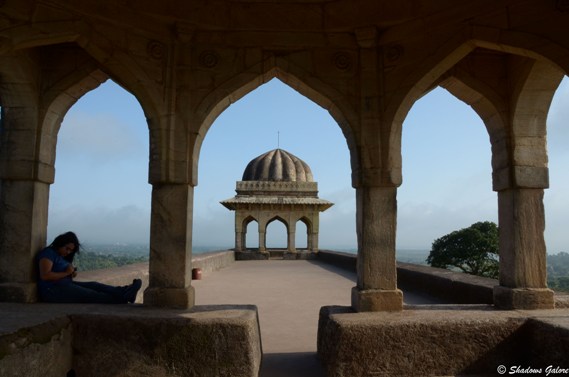 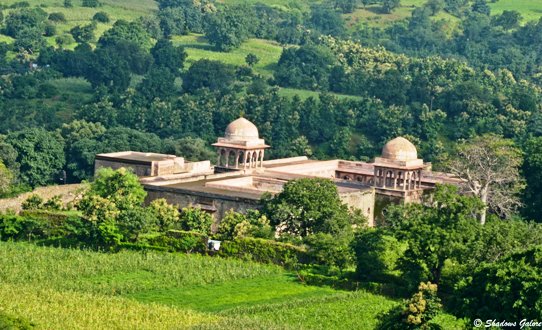 This is what Rupmati would have seen everyday when she looked at the palace of her lover ..

It was around 10:00 AM by the time we left the Rewa Kund group. While coming back we started feeling the strain of cycling and got a little tired, but we went on determined that we will explore as much as possible. We stopped at the Sagar Talab, the picturesque lake which we had seen in the morning. Just in front of the lake, there are a group of monuments, collectively known as the Lal Bagh Group. This place is also the Echo point of Mandu, if you make a shout towards the monuments, the sound will come back echoing from the buildings. 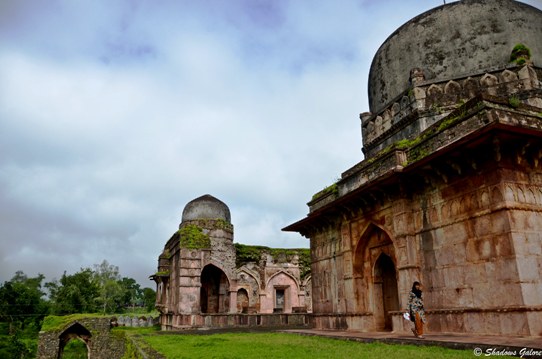 On the top of the Dai ka Makabara

The monuments on the right side of the Lal Bagh group are mostly tombs. There are two tombs named Dai ka Mahal and Dai ki Chhoti Bahan ka Mahal, mausoleums of two women who seem to have been nannies to the Royal family. The tombs were impressive buildings with high domes very similar to the Qutubshahi style of Deccan, with decorative tiles and projecting windows of Hindu style. There were a few children running around who were playfully shouting the cries of  “Allah-Hu-Akbar”, unknowingly reiterating the fact that however great one may be, at the end they all get reduced to dust and only the God remains. 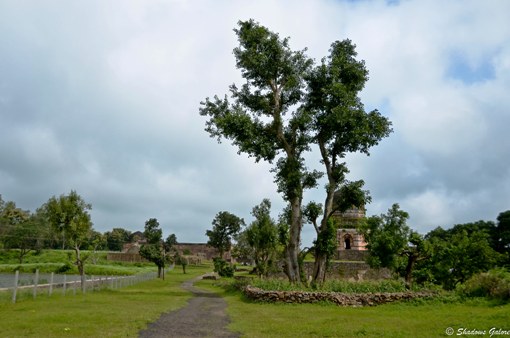 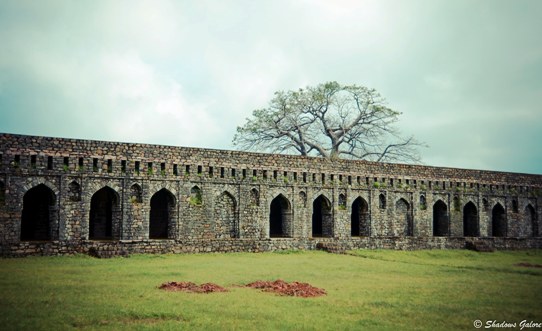 We went a little further from the tomb in the middle of spectacular greenery and overflowing ponds to reach a building which was marked as a ‘Caravan Sarai’, an inn which would have sheltered caravans of merchants and people coming from far off lands. Sitting at the gate of the inn, it is hard not to think about the people who would have passed through this gate in the centuries bygone, who they were, what language they spoke, their families, daily life and its struggles.. about the people who would have sat at the place where I was sitting. The feeling that ruins bring to the heart are difficult to express through this keyboard. 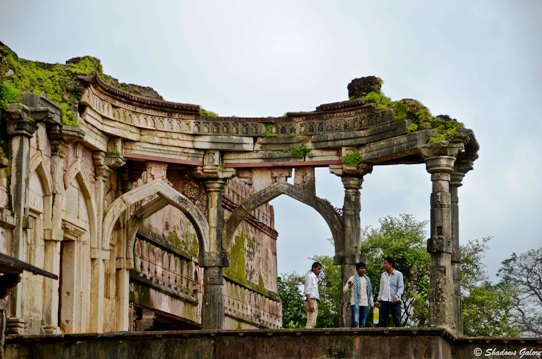 Pillars of a “Mosque”

There was a building in front of the Caravan Sarai which made me unhappy. This was called Malik Mughit’s Mosque. Built in 1452 AD, this building was one of the first Islāmic architectures built-in the region. According to the ASI board there, material from Hindu buildings were used in making this mosque as was the tradition then. However, it was clearly apparent that it was not built from the materials from a temple, but was superimposed on a temple itself. Arches were added over rectangular stones and in the vaults on the walls, there were still marks of what would have been idols of gods and goddesses. Though the building had a beautiful architecture, I was not able to fully appreciate it. Such blatant bigotry always brings a bad taste to the mouth. There were some nice flowers in the flowerbeds, took their pics and left. 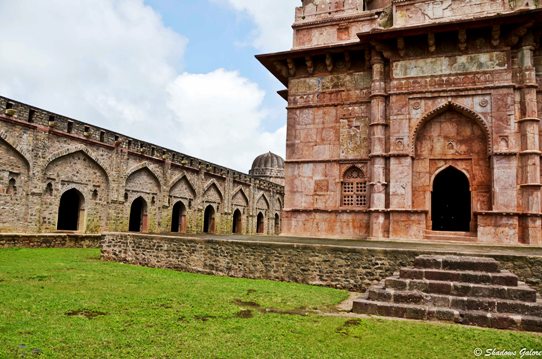 Darya Khan’s tomb was the last significant monument we saw on that morning. At first we thought it was locked up, but on closed inspection we found that the lock was only ‘ornamental’. So we put our bikes outside and went in to have a look. The tomb is an impressive structure built on a raised platform. The dome is very high and quite similar to what we saw at Hoshang Shah’s tomb. The decoration was minimalist in nature, though the lattice-work was intricate. There were corridors around the tomb with some interesting water-work to get water from a pond laid outside. There were ruins surrounding the main structure, including a locked up mosque and a run down inn. Not a human in sight, it was just we alone in this place and the ghosts from the past, sleeping peacefully in the bright of the day. Look at the photographs and go there if you visit Mandu. 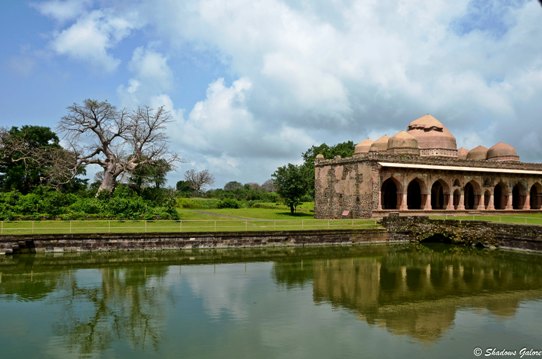 The pond and beautiful sight at the front ..

After this, we were pretty much done for the morning. All that we required at that time was to reach our guest house and collapse on the bed. However, the day was not over yet – more to come in the last and concluding part of the Mandu story.