It was a hastily planned trip, after months of procrastination. It was a super long weekend if we took an off on 14 August and we had to go somewhere. However, due to the tourist season rush, most options were exhausted and we decided to make a quick road trip to Harihareshwar in Konkan based on a tip from a colleague. It was a two-day trip, tiring due to long rides and poor road conditions, but fulfilling otherwise.

There are two routes to Harihareshwar from Pune, one via Tamhini Ghat and the other via Lonavala. To beat the traffic, we started early and by 7:00 am, were already outside Pune. This region is generally beautiful during the monsoon and the beauty of Sahyadris became even more prominent as we crossed Mulshi.

Tamhini ghat was in its full monsoon bloom with greenery all around and numerous waterfalls coming down the steep walls of the Sahyadris. We stopped midway at a roadside Dhaba for breakfast and then proceeded further. 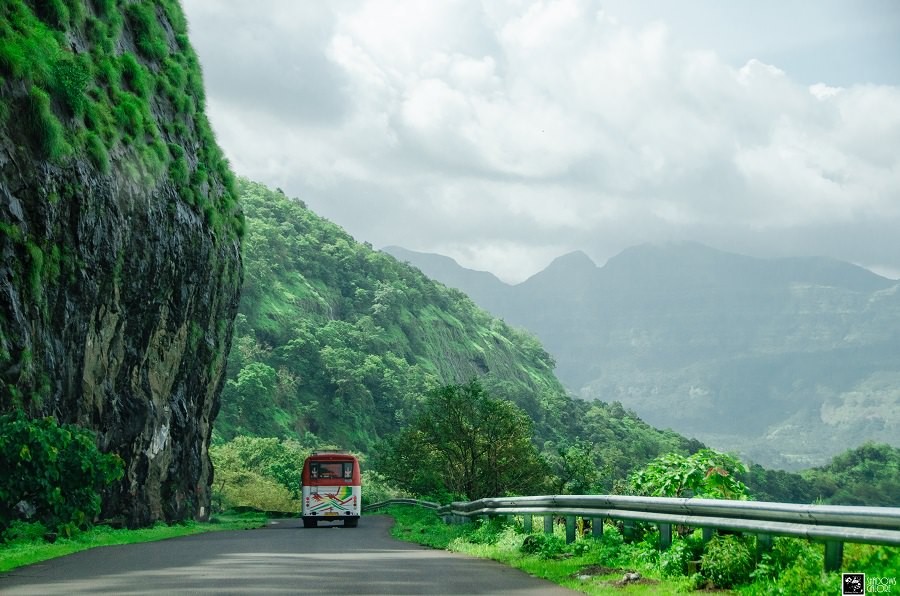 The roads went progressively bad on the ghats, and it was so bad at places that once we had to get down from the vehicle to help it navigate through the huge potholes. Things became better only when we neared Srivardhan.

The route from Srivardhan to Harihareshwar is extremely scenic, even by the standards of the magnificent Western Ghats. The serpentine road navigates through lush green rain forest under tunnels formed by trees with the Arabian Sea and its backwaters on one side and low hills on the other. It has a very calming effect and the general lack of human presence on the road makes it even better. 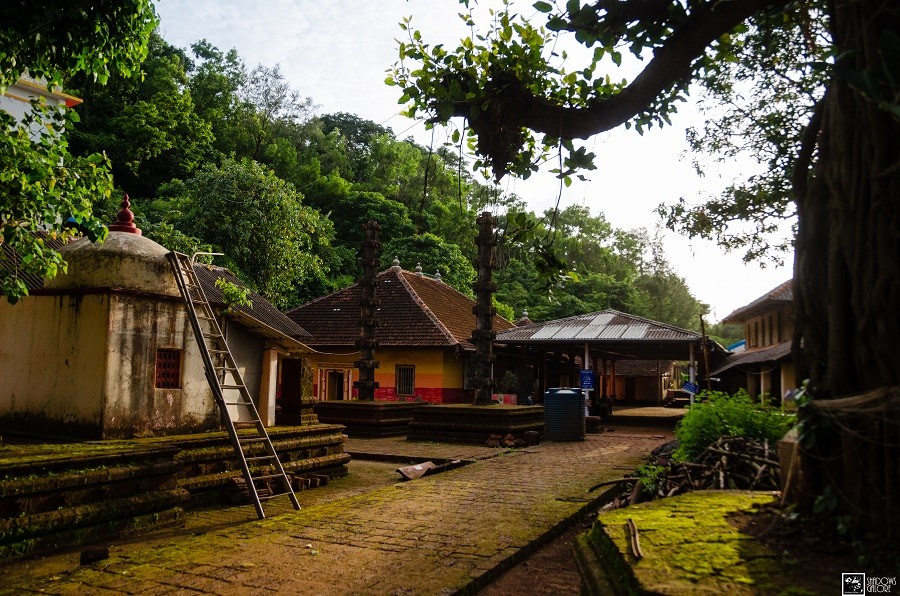 Harihareshwar is a tiny coastal town in the Raigad district of the Konkan region in Maharashtra. Nestled in the foothills of three hills Harihareshwar, Harshinachal and Pushpadri, it is touched by the river Savitri before it meets the Arabian Sea. The town is a famous religious seat of Shaivism and has an ancient Kalbhairav Temple, giving it the name Dakshin Kashi.

We reached at some time past noon and checked in at our hotel. We were told that the best eating options were available at the restaurant of the MTDC resort nearby and after a little experimentation, stuck to having all our meals there. It serves good seafood and has decent options in vegetarian as well. If you are planning a trip to Harihareshwar, try to book your accommodation MTDC well in advance, instead of looking for any other hotel. Their air conditioned wooden cottages were very beautiful and stood just next to the sea, at barely INR 500 more from the boring place where we were staying. 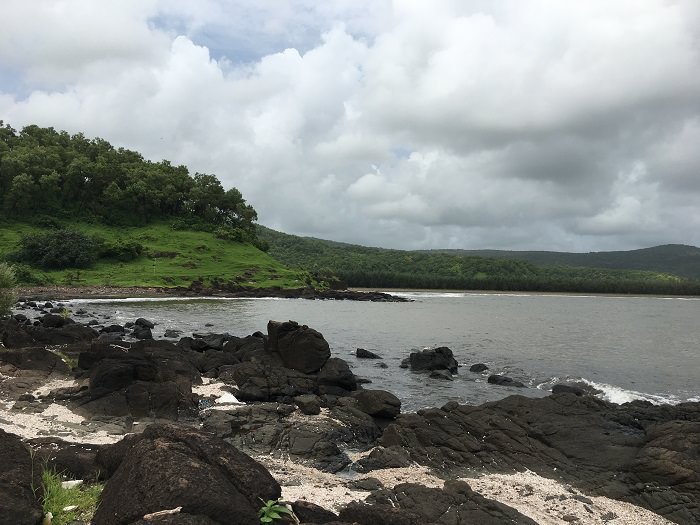 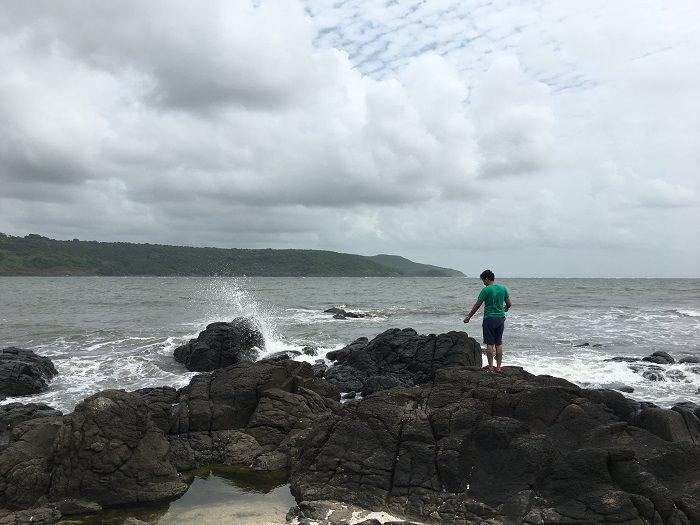 The sea beach at the MTDC resort is rocky, with black lava rocks dotting the landscape and at a 2 min walk from the restaurant. Though beautiful, it is dirty – strewn with broken glass and rubbish of all kinds – ok for spending 30 minutes but not much of a place. 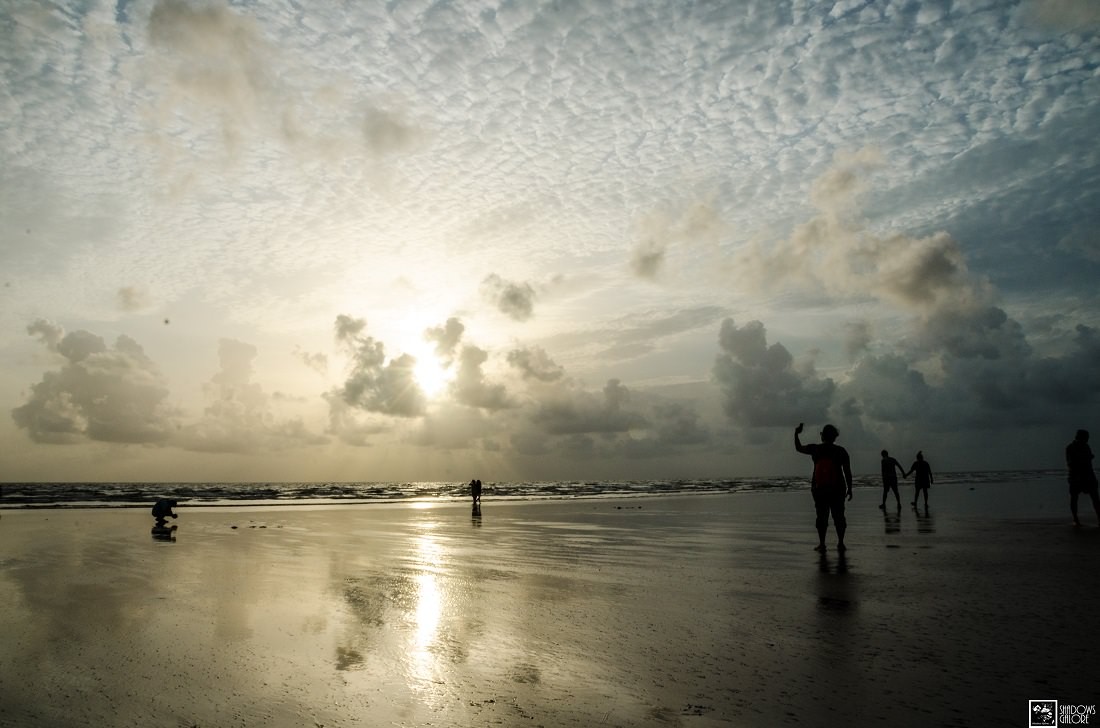 Life is a Beach

After leaving Chennai in 2012, I seem to have forgotten how fulfilling a trip to the sea beach can be, and so the drama at the sea comes to me as a surprise these days than the norm that it earlier used to be. At the Harihareshwar beach, which we visited in the afternoon, the sky, clouds, sea and sand, conspired together to create such a spectacle that it will remain etched in the memory for a long time.

The Harihareshwar beach is not very clean; the local administration does not seem to be very Swachh Bharat conscious. However, what the place lacks in terms of human folly, it more than makes up by the bounties of Mother Nature. It is an alcove of fine black sand and a calm sea flanked by hills on both sides and opening up towards the town. 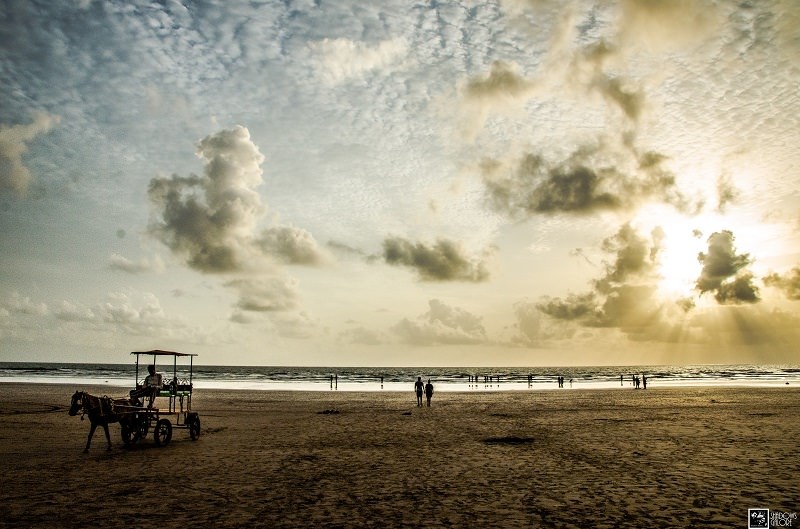 The sky was dotted with clouds in beautiful patterns and the sun played hide and seek behind then, casting interesting reflections on the perfectly flat wet sand. The colors of the sky changed in dramatic hues to orange and red as the sun went down at the horizon and we had the time of our lives capturing the colors of sunset in our cameras. I wonder if I will ever get to see such beautiful skies again. 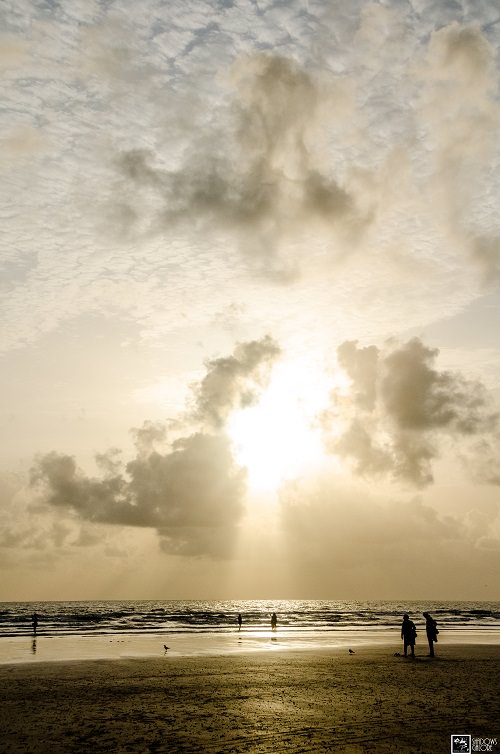 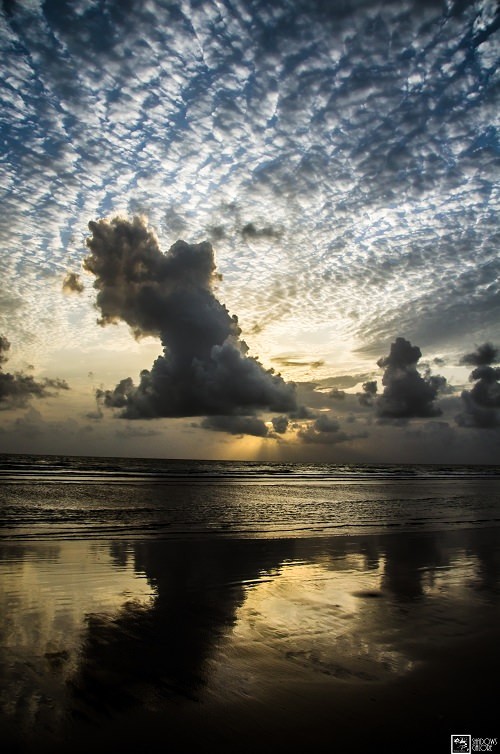 Perhaps one of the most important landmarks, and sometimes ignored, of Harihareshwar are the lava rocks lying to the left of the beach, which gets exposed during low tide and can be accessed from the temple. We noticed those formations during our visit to the beach and decided to visit them next morning. Conditions were favourable next morning and we were able to practically walk all the way to a cave and staircase, which led up to a mountain.

The rock formation is made up of wave cut basalt in an intertidal zone, which sees regular cycles of wet and dry period depending on the tides. This structure is not a single monolith, but a composite series of flows, various blobs of lava that flowed during different eras, overlapped and mingled with each other while cooling down and made the big mass that we see today. One can actually see the flow-like patterns on the floor as if something flowed down and froze permanently in time. There are small coral and moss growth over the rocks and it is better not to walk directly over those. 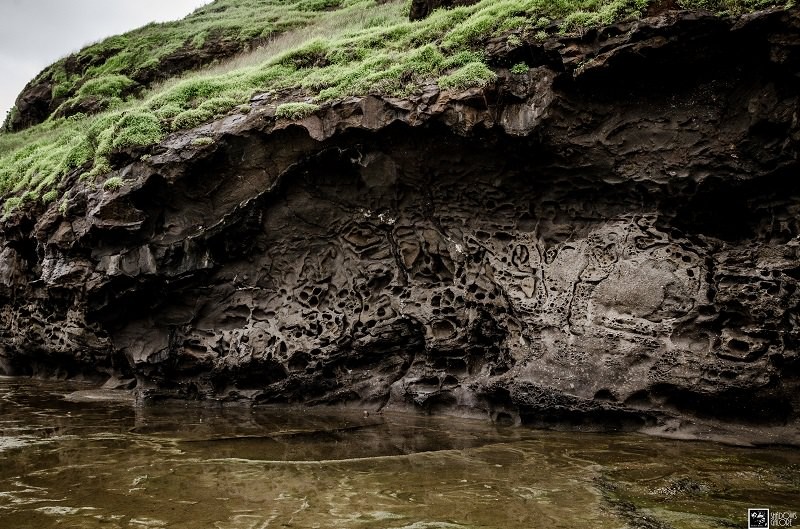 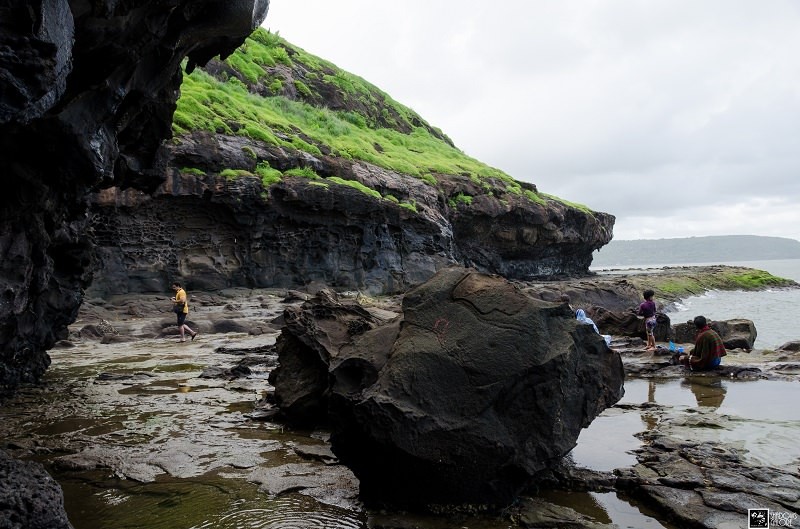 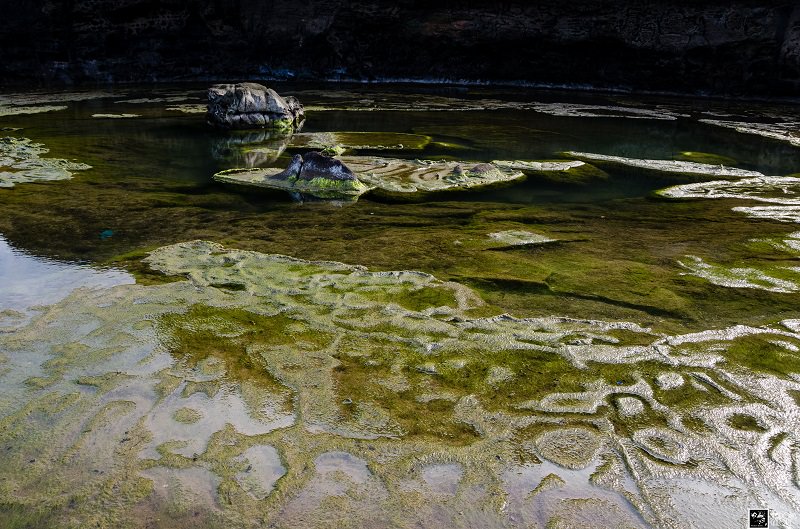 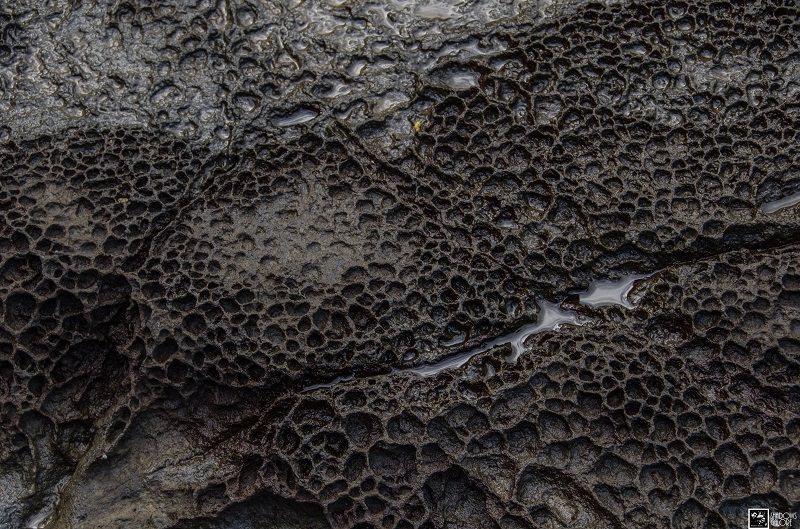 The most interesting aspect of these rocky formations is the presence of Tafoni on most of the walls and inclined planes. Tafoni are clusters of small honeycombed caverns found in granular rocks due to centuries of weathering by the elements. In this case, the seawater caused the minerals inside the rocks to dissolve gradually, creating such interesting (yes, has used this term more than once which describing the joys of this place) honeycombed laces on the rocks which would put a designer to shame. It is unfortunate that there is no sign board etc. to provide information about this unique geological phenomenon, and most of the time, people just pass by unaware.

These rocks are considered sacred by the people and there we a few families performing religious rights over them. 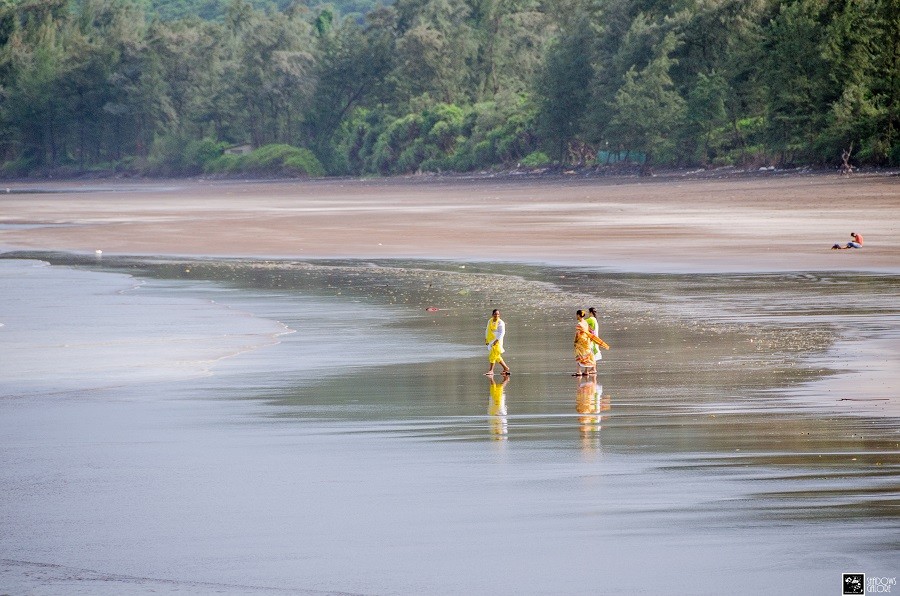 Final view of the beach before we started back

So, that was pretty much all that we did in Harihareshwar, before heading back the next day. Oh! If you are wondering what happened to the temples that make the place so famous, well we did go there, but we were in shorts and thought it wise to respect the sanctity of the place, and did not enter. Maybe, next time…

We have even come up with a one minute video on the Harihareshwar trip. Though a basic stuff, this is something you may like. Do subscribe to our YouTube channel where we will be bringing more travel stories as we learn more about filmography.

Check the Higher Resolutions Photographs of Harihareshwar on Flickr