Dandeli lies in the Uttara Kannada district of Karnataka and is a part of the Western Ghats. It hosts the second largest wildlife sanctuary in Karnataka called Dandeli Wildlife Sanctuary which, along with neighbouring Anshi National Park, forms the Anshi Dandeli Tiger Reserve. Dandeli is a natural habitat of wildlife like, tigers, leopards, black panthers, elephants, bison, bear, a variety of deer, monkeys and reptiles, including exotic snakes and river crocodiles. It is a bird watcher’s dream come true with nearly 300 species of birds making the forests their home.

Dandeli has moderate elevation and good forest cover, which gifts it with a pleasant climate throughout the year. However, the region receives heavy rainfall during the monsoons (from July to September). October to April is the proper time to visit and the best months are December to February. October and November the best months for bird watching and for activities like trekking as the hills look very pristine after the recent rains.

Direct buses to Dandeli are available from Bangalore. Dharwad (55km) and Hubli (72km) are other two major towns for inter-state buses. Dandeli is connected to Alnavar, Dharwad and Hubli by Karnataka State Transport buses. One can also book cabs or ask the resorts for a pickup.

Public transport in Dandeli is limited to the KSRTC Sarige buses. One needs to bring either their own vehicle, or use the ones provided by resorts and tour operators. Given the hilly terrain and sometimes treacherous roads, the latter is recommended. Moreover the rustic Jeeps with wind in the hair give a feeling which the air-conditioned cars can never dream of. 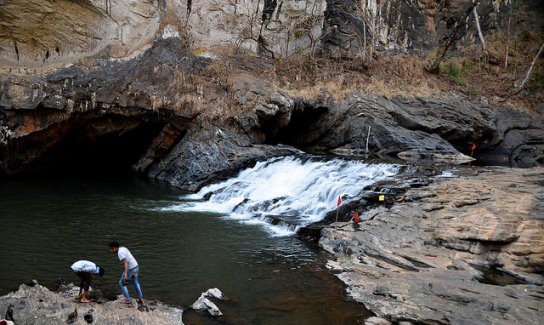 Named after an English girl Cynthia, who discovered it more than a century ago, the Syntheri rock is a colossal monolith of granite, with a height of more than 300 feet.  The river Kaneri flows at its base, the water making small caves in the rocks and a small terraced waterfall. Ideal place for someone who is interested in geology and bird watching.

Kavla caves are located about 25 km from Dandeli. These limestone caves date back to prehistoric era and have an interesting formation of stalagmite. The caves are very narrow at points where one has to crawl. A good spot for explorers at heart.

Located 11 km from Dandeli, Molangi is in the middle of dense forests with the river Kali passing between huge rocky cliffs and slopes. It is a great place for hikers and is an ideal camping spot in the forest.

Syke’s Point near the Kavla Caves provides a breathtaking view of green hills, deep valley and the Nagajhari river flowing by and merging into the Kali river. It also provides an excellent view of the sunset, when the birds return to their nests flying across the valley. 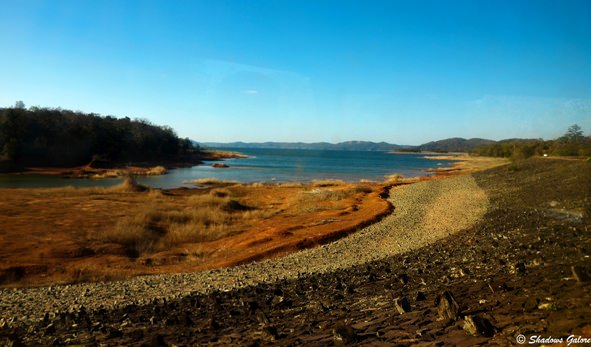 The Supa dam and lake

Supa Dam is located 25 km away from Dandeli. The dam is used to generate electricity and the lake formed in the catchment area provides a scenic view.

Shiroli Peak is located inside the forests on the sides of an abandoned mine and can be reached by the forest department jeeps. The highest point in the Uttara Kannada region, it provides a beautiful sunset view of the Sahyadris. It is usually a part of the Jungle safari and needs the permission from the forest department to visit.

Dandeli Wildlife Sanctuary is home to more than 300 species of birds and is a heaven for bird watchers. So if there is a little Salim Ali in you, take out your binoculars and set out on a walk in the early mornings. Many species of Robin, Hornbills, Pigeons, Kingfisher, Woodpecker, Cuckoo, Eagle and other birds may greet you .

Dandeli is a great place to go on a hike / trek in the mountain forests. One may expect to come across different species of wildlife and have a close brush with mother nature. A permission from the Forest Department is required for the treks and these are to be taken up only in the company of experienced guides. 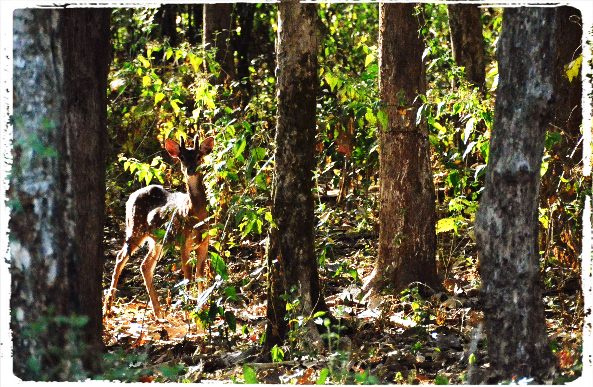 Sightings you may have in the Jungle Safari

The Jungle Safari tours are conducted by the Forest Department. An open jeep is provided with a driver and a guide. The duration of the trip is about 3-4 hours and timings are early morning and late afternoon. Though the thick forest reduces the chances of seeing wild animals, yet one can see different birds, deer, bisons, boar etc, and even a tiger if lucky. The cost per person comes to INR 500.00

White Water Rafting is a challenging activity which is conducted in the rapids of the Kali river. It is done mainly in the upper reaches of the river where the water is wild and white as it froths and foams, roaring against narrow gorges and rocky outcrops. It can be very thrilling but also slightly risky if one does not listen to the commands of the instructor. A must do for the adrenaline junkies.

The long course of rafting is 9 KM long with 8 rapids. Total cost per person comes to INR 1450.00

Kayaking is conducted in the Supa dam reservoir, which is is so huge that it looks more like a sea. There are small islands in between where you can drop anchor and relax for a while. Much earlier training is not required for this activity and though it may seem difficult to balance the narrow kayak in the beginning, you get used to it in a few minutes. Do not forget the life-jacket though!

Canyoning involves rock climbing with waterfalls added as a twist. Rappelling on the other hand is coming down the rocks rapidly with the help of the safety-rope. Both the activities are quite exciting and great for those who seek fun-filled adventure and are not shy of sweating it out in the open.

There are not many restaurants outside the Dandeli town and it is best to go with the food offered by the resort where you are staying. Both vegetarian and non-vegetarian options are available and you may also enjoy barbecue.