Ghost towns and villages hold a charm very different from the ruins of castles and fortresses, mostly because they give us a chance to peep right into the lives of the people who once inhabited them. Being a desert region, Rajasthan has no dearth of ghost villages but few of them have got as much attention as Bhangarh and Kuldhara, perhaps due to the legends associated with them. While we were in Jaisalmer, it was quite natural for us to desire a visit to Kuldhara… and so we did.

Lying 17 km west of Jaisalmer, Kuldhara has a story. Some 300 years ago, it used to be a prosperous village of Paliwal Brahmins under the state of Jaisalmer. According to the legend, the evil eyes of Salim Singh, the powerful and debauched Prime Minister of the state, fell on the daughter of the village head and he desired to marry her by force. He threatened the village with grave consequences if they did not adhere to his wish. Instead of submitting to the order of the tyrant, the Paliwals held a council and people of 85 villages left their ancestral homes and vanished. But this was not all; before leaving, they put a curse on Kuldhara that no one will ever be able to settle in their village thereafter. To this date, the village remains barren; left almost the same as its inhabitants had left it centuries ago. It is also said that people who have tried to stay there at night have been chased away by strange paranormal phenomenon.

Another, more plausible reason can be that Salim Singh raised the taxes to such an extent that it became un-viable for the local community to survive in the village; and they thus decided to migrate to greener pastures. However, people love the former story; after all who doesn’t want a tinge of romance and mystery in their tales! 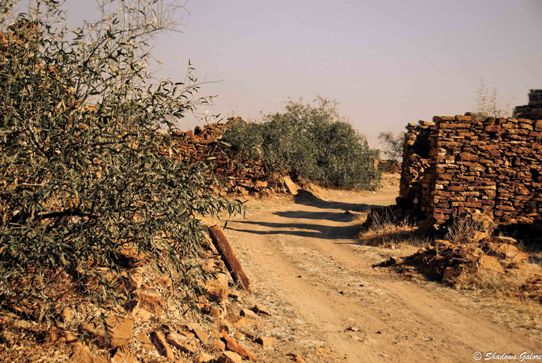 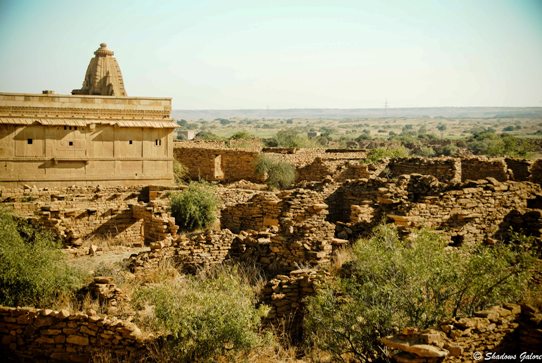 Temple and the village surrounding it

While coming back towards Jaisalmer, we took a turn to right at some point and went on another straight dusty road in the middle of nothing for a few kilometers, before the ruins showed up. The sun was up in the sky by the time we reached Kuldhara. This place is a protected monument and is maintained by the ASI. After taking the tickets etc., we entered the village on our Jeep and drove through what must have been the main street of the settlement. I must confess that it felt little eerie, rows upon rows of mud houses, their roofs gone and ruined walls standing there like the skeletons of some sad past. The landscape was dry and dusty and even during happier times, it would have been a struggle to live there. 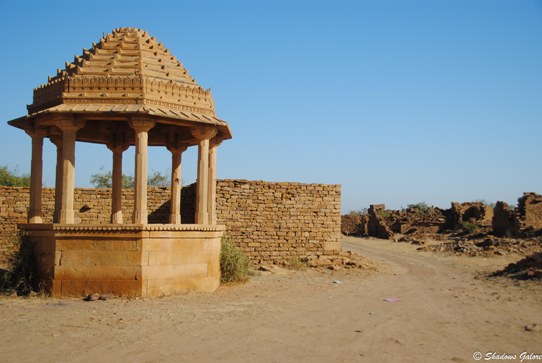 Near the village center 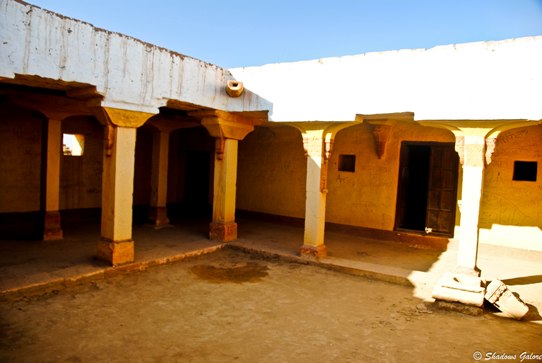 Inside the house of what would have been an affluent family

We stopped at a place which looked like the center of the village. On our right was a house in pretty good shape. We went inside its saw the rooms and even went up the stairs to the roof from where the whole village could be seen. Though I could not feel any metaphysical presence there, Ekta was quite uncomfortable and wanted to go back and be with other people. There is a temple which is probably not in use any more, and another street goes from there parallel to the main street. I persuaded Ekta to come a little further into the ruins. As we walked alone surrounded by those crumbling walls, across the lives of people gone centuries ago, it gave a weird feeling – that prickly sensation on the back of the neck which makes one very uncomfortable. Needless to say, she refused to go any further and we hurried back to our vehicle. 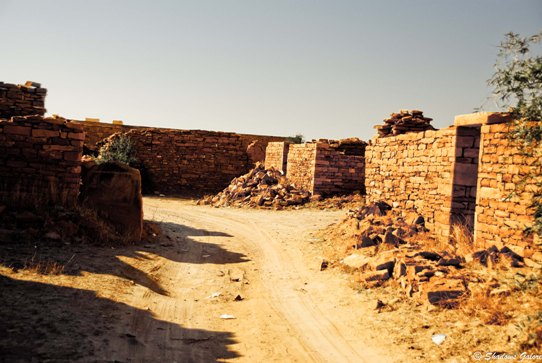 Our final memory of Kuldhara

Kuldhara is a desolate place with a forlorn look and bring sadness to the heart when one thinks of those unfortunate people who were forced to leave the lands of their forefathers. However, the place doesn’t seem to be spooky for any reason other than the legends themselves, and for our own perception based on those stories. Though there is sadness in the air, there is hopefully nothing cursed about it.

If you want to read more about Kuldhara, visit this post by Sudha who was there at around the same time as us.