Colorful Rajasthan: The Havelis of Jaisalmer 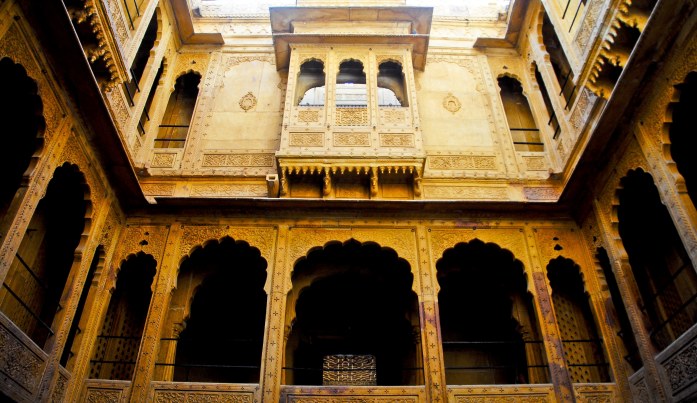 The Havelis of Jaisalmer are as famous as its might fortress. Carved in the same yellow sandstone, their intricately carved beauties are a reminiscent of the prosperous past of the town when it happened to be the business hub on the Camel caravan route connecting India to Central Asia. 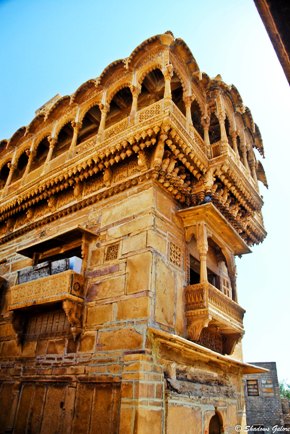 So on an afternoon, we sallied down from the fort and into the streets of Jaisalmer in full force in search of the havelis. The first one we found soon, the haveli of Salim Singh, in whom we find the Rasputin of Jaisalmer. He was the Prime Minister of Jaisalmer in early 1800s whose story of intrigue and revenge not only brought much misery to the kingdom but also caused the Bhati Royals to migrate northwards towards Pakistan. In the end, Salim Singh  was stabbed by a noble and when he started recovering from the wound, his own wife poisoned him.

Salim Singh’s Haveli was originally built to resemble a peacock. Since its façade looks like the stern of a ship, it is also referred as Jahazmahal. The Haveli is not in a very good shape, there are cracks on the walls and the coloured glass panes are broken.  However its derelict state cannot hide the beauty this building must have been once upon a time.  As one goes up the narrow staircase, one cannot help but marvel at the way sandstone has been molded into art here. There are 38 balconies and not two of them are alike. It is said that Salim Singh wanted to make his haveli higher than the fort, but the Rawal was offended and demolished the top stories. 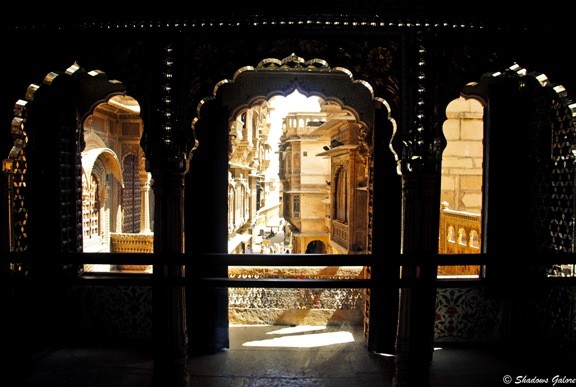 A view from Patwon ki Haveli

From there we went in search of the much talked about haveli of Jaisalmer, Patwon Ki Haveli. Built between 1800 and 1860, Patwon ki Haveli is a five building complex built by a merchant for his five sons, who was so wealthy that he used to advance loans to the kings. Rising above a narrow lane which looks like the Siq of Petra, this magnificent building is a delight to watch and takes at least 2 hours to explore. 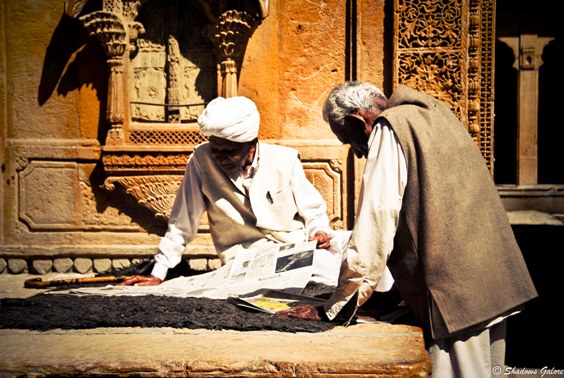 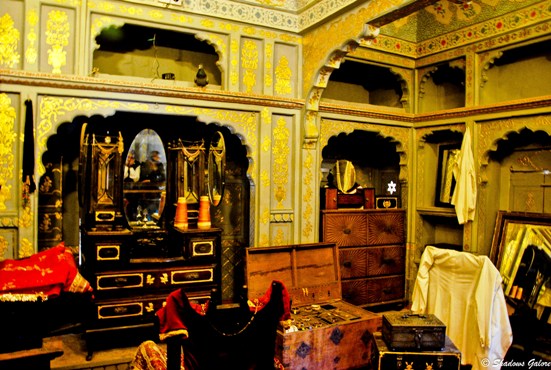 A living room in the museum

Build in the same yellow sandstone, every window, every balcony and every arch of this haveli seems to be built for artistic exclusiveness. There are as many as 60 balconies looking down upon the awestruck tourists staring at it. A part of the haveli has been converted into a museum giving a valuable insight into the 19th century life of these wealthy merchants. There is a rich display of artefacts from how the people lived during those days, there is even a gallery just for turbans! We spend a lot of time doing our exploration and marvelling at the workmanship of the artisans of yore who could create magic without today’s fancy gadgets. Art cannot be held hostage to technology and these monuments are worthy reminders to this fact. 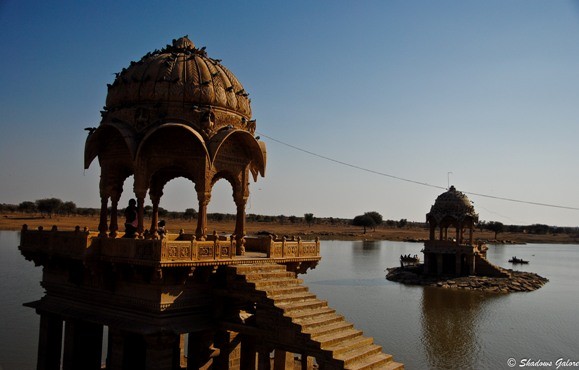 While not a haveli, I am taking the liberty to mention Gadi Sagar Lake in this post itself. Once a vital supply of water to Jaisalmer, this 14th century lake remains as an  important landmark in the town. There is a big Tikon-ki-pol gateway to the lake, said to be built by a courtesan who was an ardent follower of Lord Krishna. Surrounded by many temples and shrines, it is a good place to do spend some relaxed time in some other century. It made up for some good photography while the sun went down,  our last evening in Jaisalmer..