Our last destination in this trip was Jaisalmer, the Golden fort which was on my bucket list since I saw Satyajit Ray’s ‘Sonar Kella’ years back. Since the Desert Festival was to be organized from 22 to 25 Feb, we thought of coinciding our arrival with these dates. So after an eventful stay in Jodhpur, we reached Jaisalmer station on the cold morning of 22nd Feb. For stay, we had chosen a guest house inside the fort, so we took a taxi which dropped us at the gates of the fort for a surprisingly small amount of money, with the string attached that we would give him a call if we wanted to book a camel safari.

Established in 1156 AD by the Bhati King Jaisal, the town of Jaisalmer has a millennium of history under its belt; battles and legends of the desert hidden in its bosom including two jauhars and a saka. For centuries, it served as the gateway to India for the camel-caravans coming from Central Asia and flourished as a market-town.  After opening of sea ports by the British, and then closing of the borders post independence, the town lost its importance as a trading town. However its strategic importance continues and the town is a major garrison for Indian defense forces. The fortunes of Jaisalmer saw a upturn in the recent decades after the sudden interest of tourists in this place. Today it serves as a prime tourist’s destination of Rajasthan and a launch pad for desert safaris in the Thar. A view of the fort from the palace, the cannon balls can still be seen on the ramparts

The first view of the Jaisalmer Fort was a sight I will remember till my last days; a massive fort built in yellow sand-stone rising out of the flatland “like a mirage in the desert”, its ramparts glowing in shades of gold in the rays of the morning sun, Sonar Kella is a spectacle in every sense. Unlike most other forts in India, it is a living one. There are temples where conch still blows every morning as it did 500 hundred year ago, homes and havelis where people go on with their lives as they have been doing for centuries. It is this liveliness apart from its ethereal beauty, which makes the Golden Fort so unique. 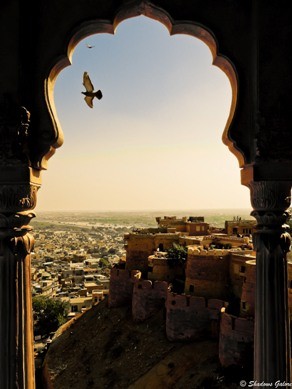 Jaisalmer from the fort palace

After recovering from our awe-struck-ness, it was time to find the guest-house and that meant lugging our bags all the way to the fort. The path to the fort is covered by four gates, each successive one bigger than the previous. So through these gates we crossed the centuries which lay between the us and the taxi and were led to the central square of the fort, the Dashera Chowk where the fourth gate (Hawa Pol) goes to. The seven storied palace of the former rulers of Jaisalmer was right above us. From here, we took one of the four lanes that opened in different direction and reached our guest-house. 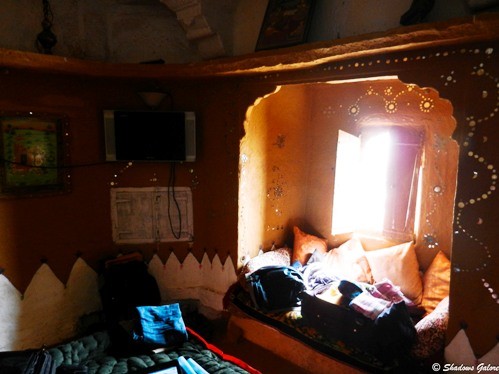 Our guest-house, Desert Haveli, was relative newer, just 500 years old. Managed by a family and two very cheerful young men, it is quite a comfortable place with a great view of the fort and the town below. This place is highly recommended if you are tired of pretentious hotels cut off from surroundings and want a place to stay with warm- always smiling hosts.

As we laid down our bags and lied down on the soft bed, something happened. We slept off and missed the opening ceremony of the Desert Festival, the very purpose for which we had undertaken the whole journey. But three days later, we did not mind any of that. 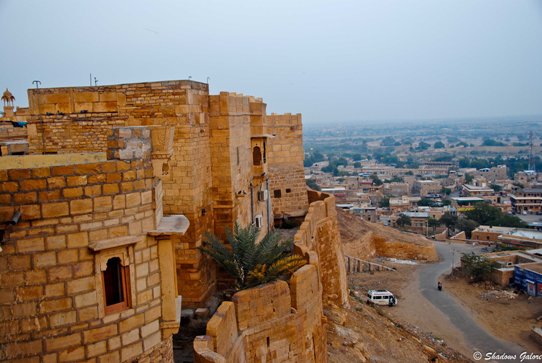 A model of the fort

The fort is triangular, taking the shape of the Trikuta hill on which it stands, surrounded by three layers of fortifications. The hub of the fort is still Dasera Chowk, the point to which auto rickshaws are allowed to ply. The rest of the fort needs to be covered on foot. Inside its interiors honeycombed with narrow lanes, intricately decorated houses, guest houses, restaurants and shops jostle for space. The road side shops of the fort sell all kinds of curios, one speciality being the volcano stone which was claimed to have the ability to turn milk to solid curd. Though the continuous pestering of the shopkeepers may be annoying at times, but it should be remembered that tourism remains the primary and sometimes the only source of income for these people. Tourism remains the biggest boon, and bane of Jaisalmer. 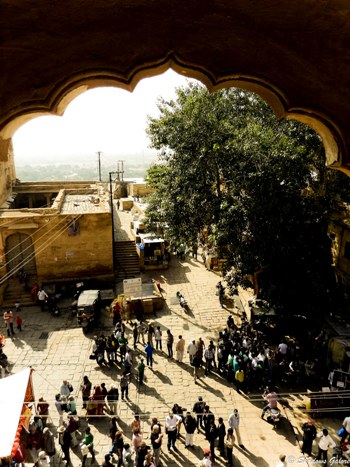 A view of Dashera Chowk from Fort Palace

In this fantasy land of ours, we stayed for memorable three days. It was a joy walking through those lanes from another era it was difficult to get awed by the beauty in stone. Jaisalmer fort is extremely photogenic, a dream come true for any photographer worth his salt. So while Ekta busied herself with buying stuff from the shops, I happily clicked away to glory. 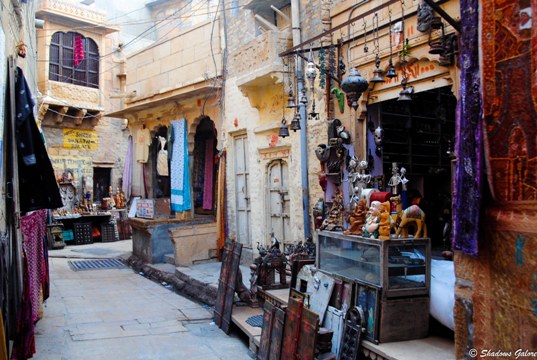 A street inside the fort, shops filled with curios Merchandise of a road side shop displayed on the walls

Within the fort, towards the right of the fort palace, is an interconnected maze like complex of seven Jain temples. Built in the same yellow sandstone as the rest of the fort, these exquisitely carved temples look extraordinarily beautiful. The temples are by the names, Chandraprabhu, Rikhavdev, Parasnath, Shitalnath, Sambhavnath, Shantinath and Kunthunath; dedicated to the Jain Teerthankars. These temples called for some excited exploration on our part on the morning of the second day. The temples open up early in the morning and closes at 1:00 PM; it is advisable to go there as early as 7:00 am. There is no entrance fee, however one has to pay for the camera (still/video/mobile : INR 70/120/30).

There is a Hindu temple named Laxminarayan Temple in the center of the fort. Though we could see its towers from our guest house, we somehow missed paying a visit to it. 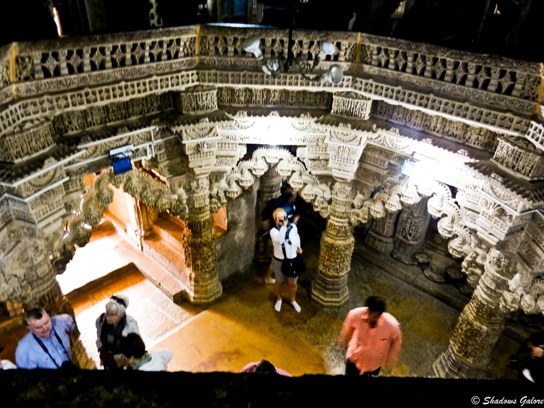 Inside the Jain Temple 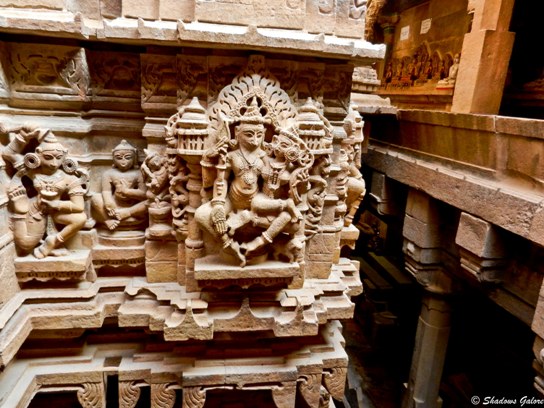 On our second day, we visited the Fort Palace, the original residential complex of the royal family of Jaisalmer. The seven storied high elegant palace towers above the Hawa Pol overlooking the Dashera chowk and extends towards the left of the gate.  It is a beautiful palace with a well stocked museum with ancient sculptures, paintings, arms etc. The roof top of the palace gives a beautiful view of the Jaisalmer town and fort. The rooms and balconies were embedded with richly carved jharokhas providing conspicuous view of the outside. The mirrored Rang Mahal was the high point of the palace. An audio guide is strongly recommended to get a good idea of the museum and palace. 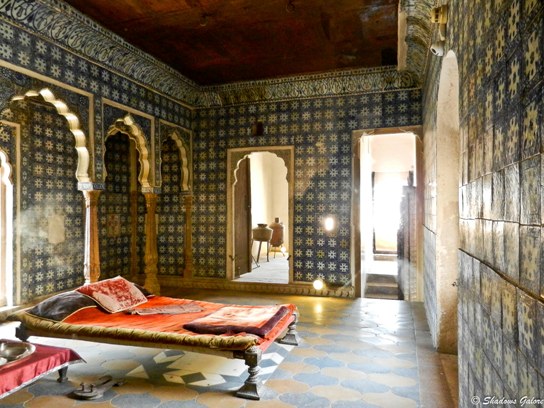 After dinner Ekta strolled down towards the market and I went after her. As I took a turn from the Suraj pol, I saw something which transfixed me. A full moon in the sky, small clouds lit by its light; and Sonar Kella in all its glory just below it. Unfortunately I did not have my camera with me at that time and the point and shoot could capture only a fraction of that beauty. However what I saw that evening is safe within my heart and will stay for a long time. 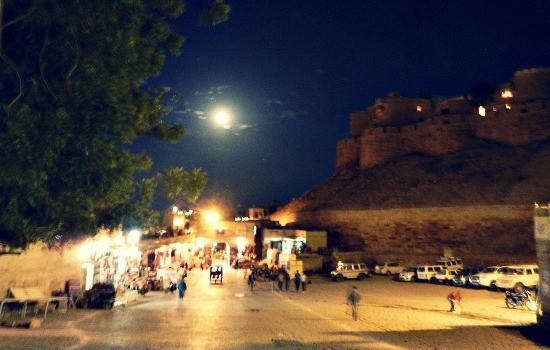 Sonar Kella and the moon .. I wish camera could correctly tell what the eyes saw…

Sitting comfortably wrapped up in a shawl on the roof top Free Tibet restaurant on a cold and windy evening, we looked at the light from the fort around us in wonder. The beauty of Jaisalmer cannot be matched easily, one has to be there to know how it feels like. This fairy tale castle deserves every bit of the awe it generates when one sees it for the first time.