Colorful Rajasthan: An Evening at Thar 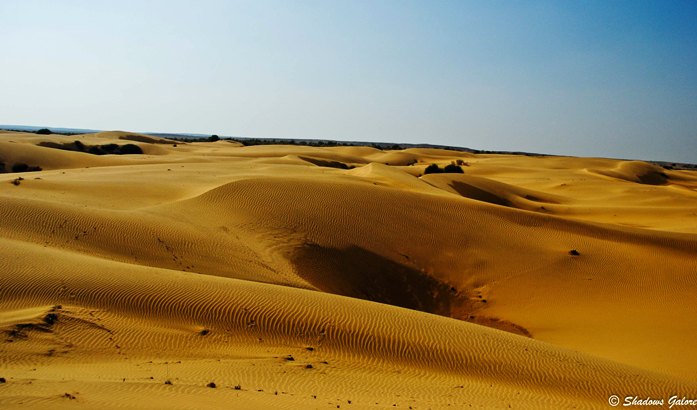 So after much pestering from the folks in and around our guest house, we agreed for a Desert Safari offer from our guest house folks. The package consisted of a trip to some “non-touristy” sand dunes, followed by a camel ride to Sam and an evening of folk dance and music in a desert camp. We were to apparently share this trip with two other couples. The couples in question turned out to be some guys from Delhi who had come on a joyride to Rajasthan and it was merely a bait to hook us in, as we would have been otherwise uncomfortable going with a men only group. When in Jaisalmer, be ready for desert safari agents going back on their promise, it’s a part of the tourist culture in India. The only positive about all this is that, they do all this with such a genuine smile that one doesn’t feel like getting mad at them.

Around 3:00 PM of 24th Feb, we started for the desert in a Commander Jeep, a vehicle befitting the terrain. We got to sit on the front seat and though a little cramped, it gave us an opportunity to click photographs on the go. 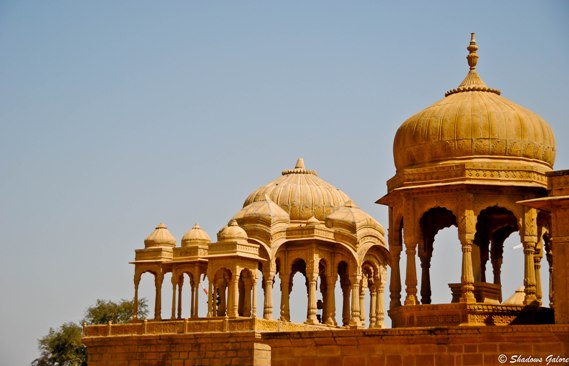 Our first stop in the journey came just outside Jaisalmer, at Badabagh. We saw at a distance, beautiful chhatris made of yellow sandstone glowing in the rays of the setting sun. On being inquired, the driver told us that these were actually the samadhis (mausoleums) of the Bhati royals through centuries. We made a brief halt at this place looking at the intricately carved memorials for the kings and princes long gone. Long after we are gone, these memorials will still remain.

We also came across the famed Jain temples of Lodurva, but that in another story. 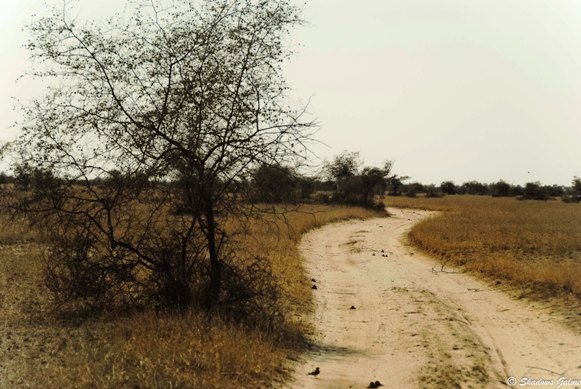 Roads of the desert

The roads in the Thar, unlike anywhere else in India, are surprisingly easy to drive on. One may often find themselves in the middle of nowhere on a road which goes straight for miles, till the horizon. The terrain is as flat as the palm of one’s hand and all that can be seen is white sand; in our case, caked after a recent rain, and some shrubs here and there.

After going for around 50 km, the driver took off from the road and started driving in the wilderness, guided only by dirt tracks on the caked mud. Another 5 km later, we reached our non-touristy desert, on the sand dunes of the Thar. 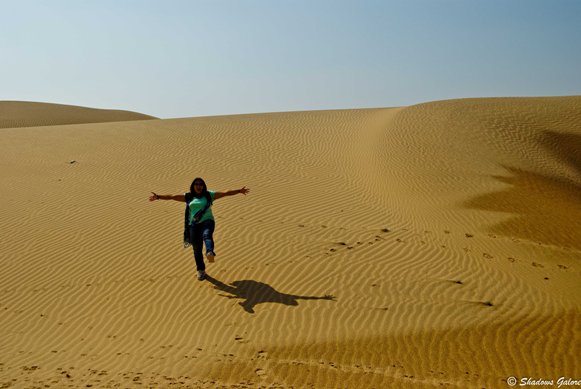 Ekta was quite happy with the sand dunes 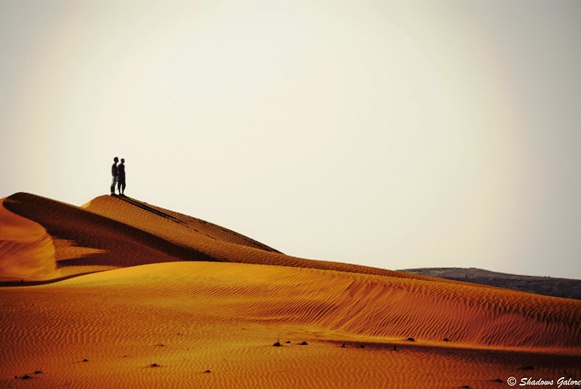 On the sands of time

To be on the sand dunes of a desert is an experience to be remembered. As we stood there on the sands of the Thar, for miles in front of us, all we could see were sand dunes of various shapes and heights, some as high as a skyscraper. The strangest phenomenon was the eerie silence of the desert. There was no man-made noise, no birds chirping, no animals in sigh, not even a breeze rustling through leaves, for there were no trees. If one stood still, one could feel silence in its absolute magnitude. When you are in the middle of so much peace, it feels criminal to disturb the tranquility; and so even we came down to whispers among ourselves. Looking back, I can only wonder what tourists will make of this place once they start arriving in hordes. 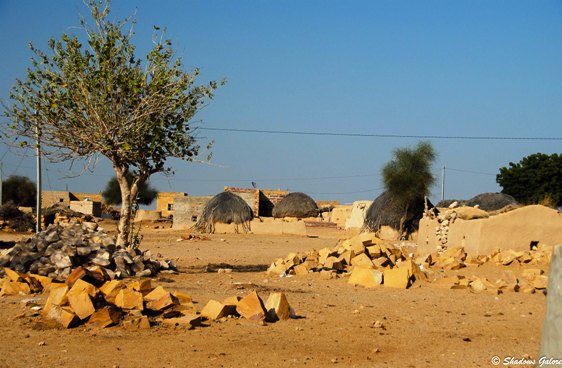 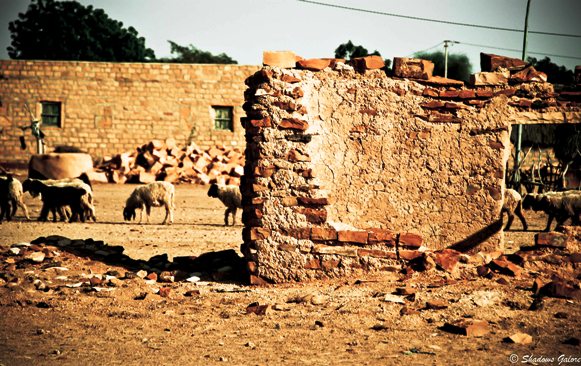 … was sparsely populated, with more goats than people seen around …

After spending a couple of hours on the dunes, we realized that we were getting hungry. Since dinner was a long time away, we thought of buying some biscuits etc. So the next problem was to find a shop where we could buy such stuff, and there was no trace of human civilization for as far as we could see. However the driver knew of a village which was not very far from there and lay en-route to our camel safari. So we drove towards the village. 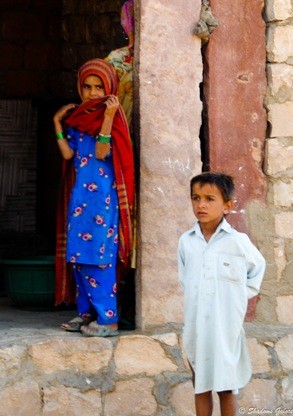 … and had some very curious children …

The village was unlike any we had seen across Rajasthan, and the residents with their Pathan suits, looked more Baloch or Pashtun than Rajasthanis. We were just about 40 km away from Pakistan so this was hardly a surprise. Since open space was not a constraint, the houses were spread wide and far in between and wore an almost deserted look. As we reached a shop in the village, a group of children surrounded us. Since outsiders were not a common sight in the village, we were their object of utmost curiosity. We tried to have a small chat with them but they turned out to be a shy lot. So after a few unsuccessful attempts at wooing them, we carried on with our journey, now reinforced with food. 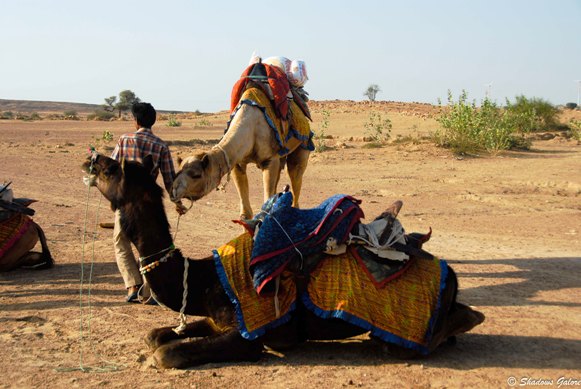 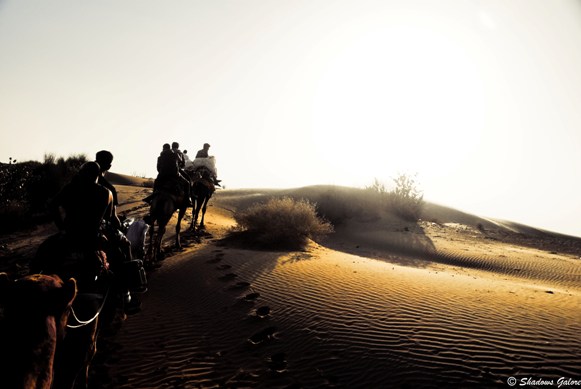 ..and started our camel safari ..

The place where we started our camel safari was a village a little away from the Sam desert. The camel riders were mostly adolescent kids who were quite amused at the terror we displayed at the prospect of riding those giants. Riding camels is no easy task as unlike elephants, they have a wobbly gait and maintaining balance on them is a tough task. If they decide to get into a run, God save you. Clicking photographs while on the camel back while still remaining on the seat was a difficult task and I was in the constant fear that I was going to fall down and break my camera, or worse, my neck. And thus, wobbling back and forth on camel back, we reached the sand dunes of Sam. 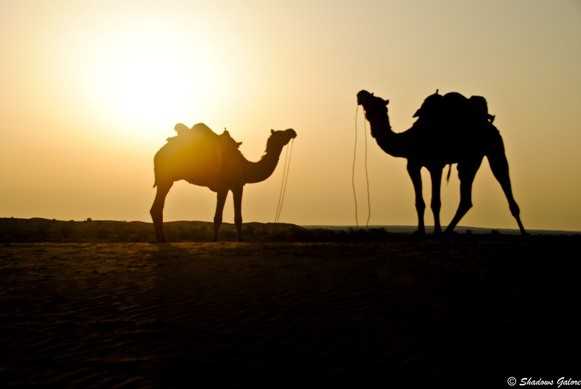 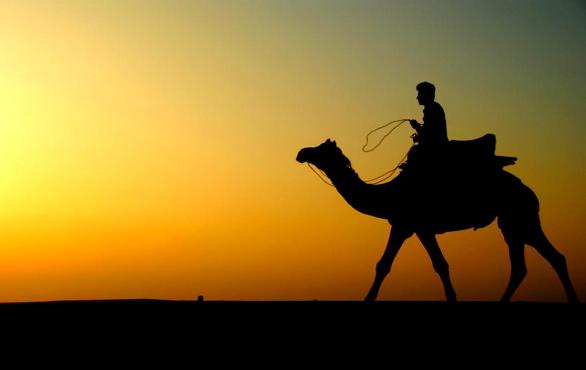 … and silhouettes started moving against the sky and the desert …

The sun was nearing the horizon now and we were to witness the famed sunset of the desert. As the skies started taking the different hues of orange and red, the spectacle were every bit worthy of their fame. Though it has become a tourist cliché, a visit to the sand dunes and witnessing the sunset is something which is highly recommended. 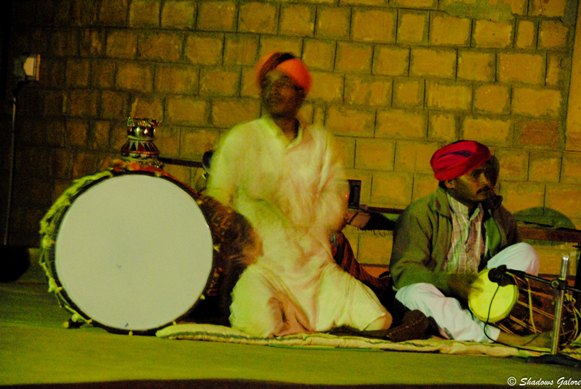 Rajasthani folk singers, our hosts for the night …

As the evening started getting chilly, we retired to our desert camp. Though we had the option to live in a tent, we chose to stay in concrete rooms as the night was turning into a very cold one. The night ended on a musical note with performances from a troupe of folk singers and dancers. However I felt sad for them; forced to sing and dance on popular Bollywood songs on demand, the immensely talented artists deserved more respect than they actually got. Cuddled up under quilts, we enjoyed their performance as much as we could. It was a different night … 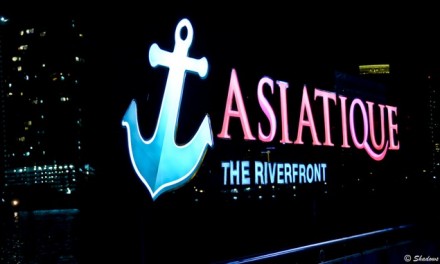 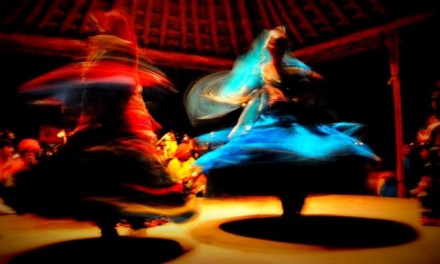 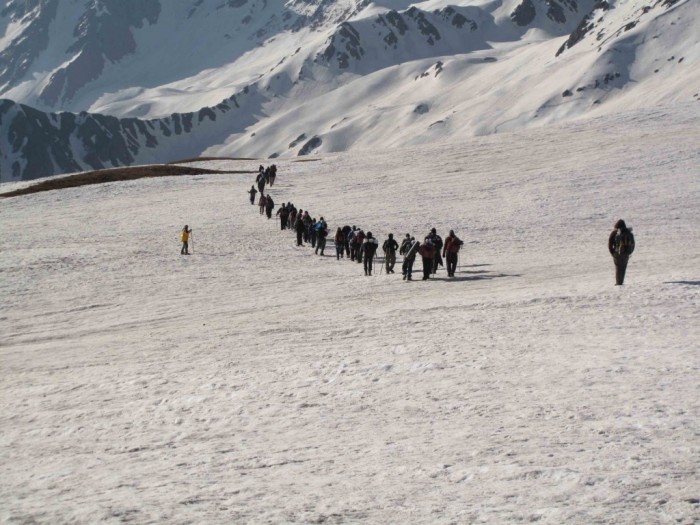 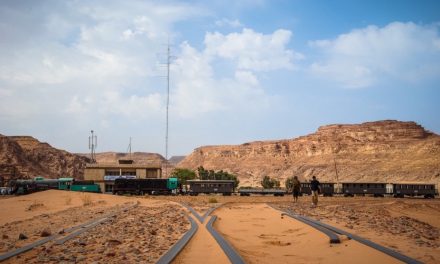