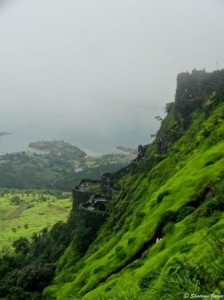 Greenery and the stone ramparts

Monsoons in Pune are our favorite time of the year, when we have so many options to take a weekend getaway. The climate cools down the mother earth undergoes a drastic transformation to become ‘Sasya shyamala’.

It had been a long time since we went on a trek, in fact we did not have a single one in the last year. So this time, as soon as the monsoon arrived, we started looking for a place to go hiking. There is a Facebook page called Pune Hikers which displays the various treks planned around Pune. We checked there and found that a trekking group called ‘Explorers’ was offering a trek to nearby Lohagad, categorized as an easy one. So that was it, we planned and booked the trek for three of us, me, Puru and his friend Mitesh.

Lohagad (Iron Fort), is a hill fort built at an altitude of 1050 m. The fort is around 2000 years old and got prominence during the time of Marathas. The fort was first captured by Shivaji in 1648 AD, and exchanged hands many times between the Mughals and Mughals before it was finally settling down with the latter. It was used by Peshwa Nana Phadnawis as his residence during the 1700s who added a lot of structures to it, including a huge tank. The Western part of the fort is a formidable wall like spur, known as Scorpion’s Tail, due to its shape.

Our Day started pretty early, as we were supposed to be at the Shivaji Nagar Railway Station by 5:30 am. At the station, we met the rest of the group and boarded the 6:00 am local to Malavli. The train was near empty, scenery outside was very good and it made us fresh and excited for the day which awaited us. We reached the Malavli station at 7:00 am. 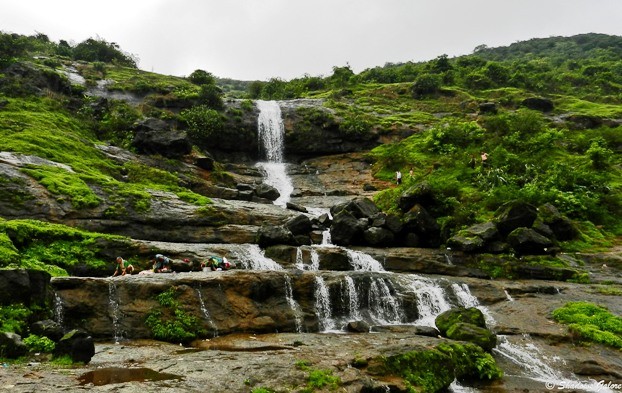 The first waterfall of the day 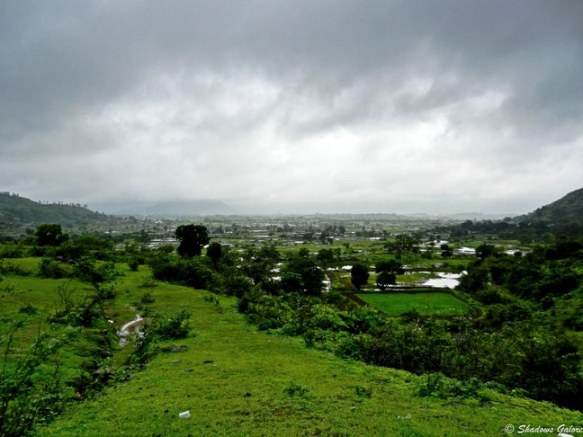 From the Malavli station, one needs to turn left, get on a bridge to cross the Mumbai-Pune Expressway, take a right and walk for around 2 km to the Malavli village. At the village, we had piping hot poha for breakfast and a round of introduction. Then, spirits aroused by the calls of Jai Shivaji and Jai Bhavani, we started the trek.

As one starts on the ascending trail from Malavli, one can see a long flight of steps going up in the left. These caves lead to the Bhaje Caves, a group of rock-cut caves dating back to 200 BC. We were supposed to come back to the caves after completing the trek, but that’s another story. 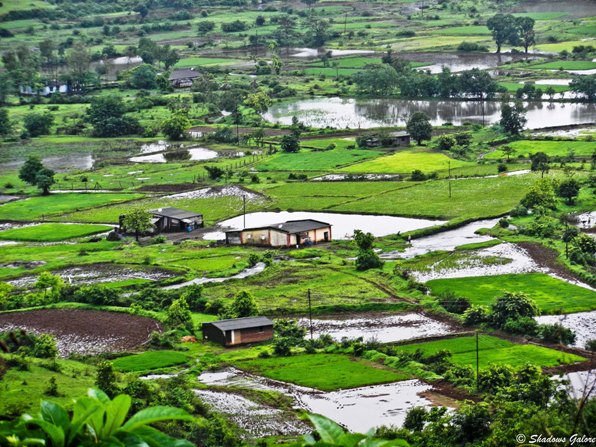 The valley below, houses looking as if they were matchboxes 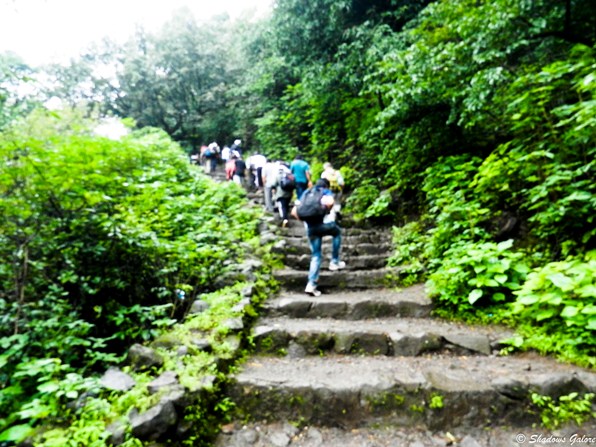 The ascent was not very difficult but we were out of practice and got tired a little early. So As we went up, the mist increased and we could see beautiful lush green valley below, with houses looking like they were matchboxes. There were many waterfalls along the way made making the scenery even more picturesque. Traversing through this mostly rocky and often slippery route we reached the Lohgadwadi village after almost 1.5 hrs.

Being morning, most of the route was barren and we were the only people hiking. From here the real fort starts and one needs to take the steps to reach the top. By now people had started coming in and the steps were started to become crowded.

A word about the crowds; though I will not complain about the trekkers, there are many who create a lot of nuisance and discomfort for others. People litter, get drunk and play loud music in their cars. They not only damage the already fragile ecosystem of the place but also end up making the trip an unpleasant experience for others. Sadly there is not a single policeman to be seen anywhere and the unruly mob behavior goes unchecked.  They end up bringing a bad name to the state. 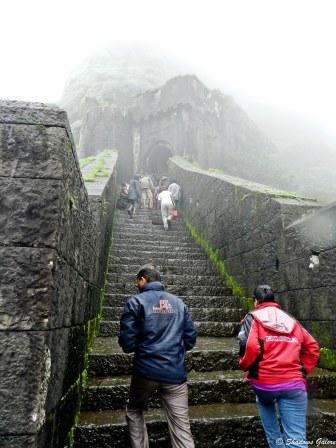 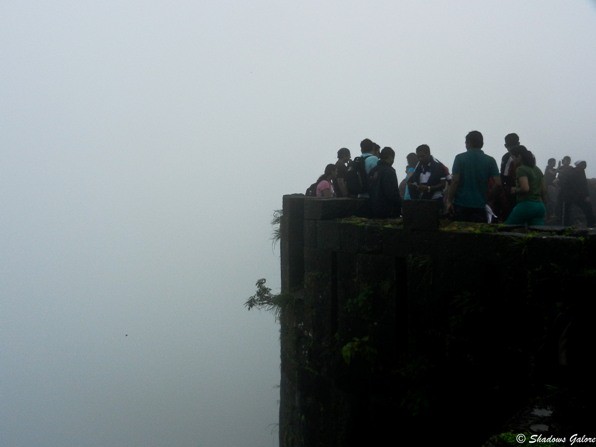 Picnickers on ramparts seemingly arising out of nowehere

The steps at Lohagad are quite steep and quite testing on the knees, but the natural beauty takes away a lot of pain. Going up, one can’t help but stop, not just because you would be short of breath, to take in the fresh air and enjoy the white fog and lush green view around. After some climbing, we reached the Ganesh Darwaja, the main gate of the fort. Flanked by robust bastions it still have its wooden doors intact, equipped with pointed spears to deter war-elephants. From here, the increasingly narrowed path ran along the walls with rocks on the other side, mossy and dripping with water. It would have been very difficult for the invading armies if they ever tried to force their way through the gate and through this treacherous corridor, with defenders in a better position above them. 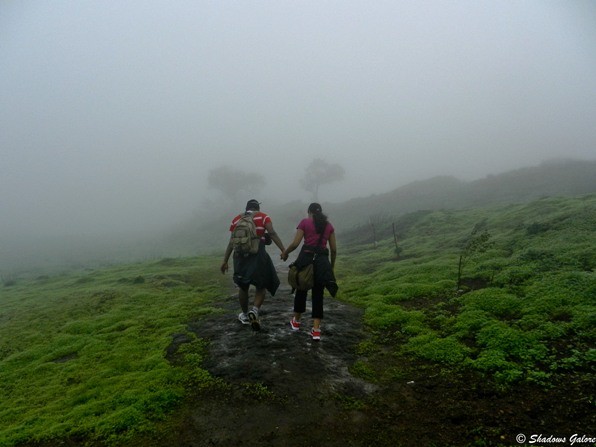 Walk in the fog 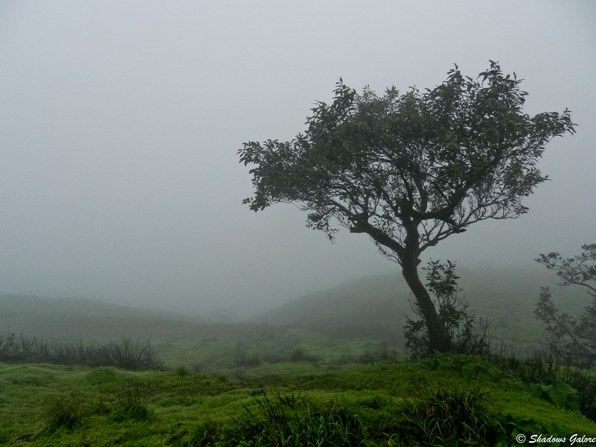 The last gate opens up in a huge courtyard. There is a temple, a dargah and a small pond at this place. At this point on can get on the ramparts and look below to fully appreciate how far of the trek has been accomplished. But this was not our destination, we had to reach the end of the Scorpion’s tail. So after a short rest, we started walking again in mist and rain. We passed through a meadow of lush green grass, some more ponds and a huge tank, the one made by Nana Phadnavis. It would have been enough to store water for a garrison for more than a year. 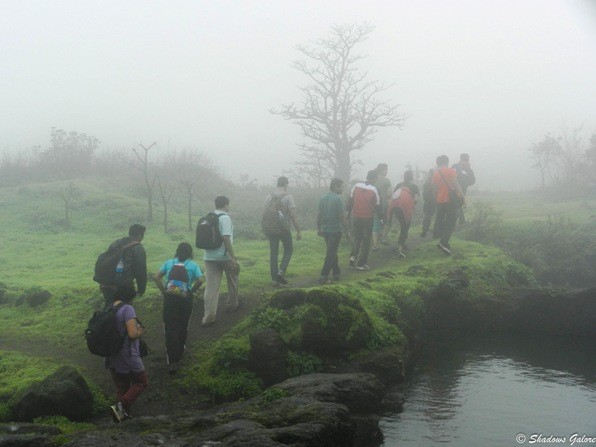 More walking in the fog, along the water tank 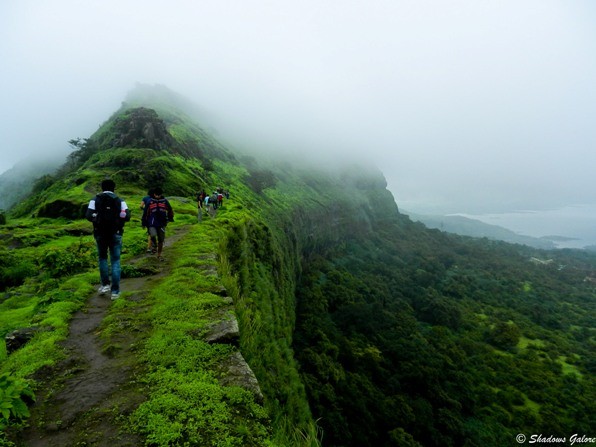 Towards scorpion tail, just inches away from a free fall .. 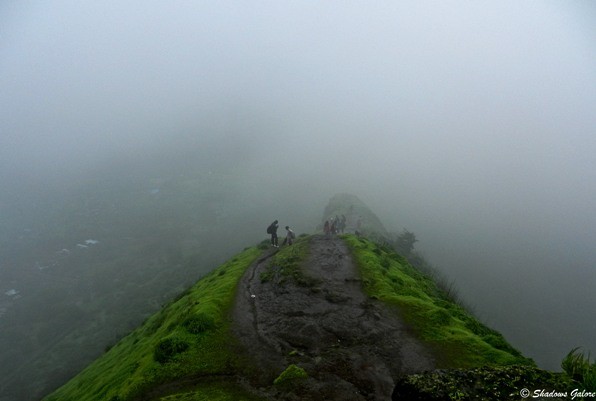 The trek at this point was more difficult, the rocks were slippery and a clear path was non-existent at some places. The slight drizzle and the fog made us forget how tired we were. At one point, we had to walk on a very narrow path on the edge of the cliff. Thankfully  the thick mist did not let us know that there was a free fall of 1000 m just a little to the left. After some more walk, we reach the end point. The sight was amazing.  Cold wind, rain and the white fog playing hide and seek with the scenery around.. Simply beautiful!

A small tip if you are trekking in rains. Instead of keeping your feet straight, place them on an angle especially while descending. Also,  do not hesitate in going on all fours if need arises and make sure to have a 3:1 ratio, 3 limbs firmly placed while the free one moves.

After spending some time there, we came down via the same route. By the time we reached the Lohagadwadi, we were very hungry. The trek organizers had arranged lunch at a village home, a delicious affair of chapati, bhakhri, rice, curry, dal and sweets. We rested our bodies for a long time here before starting the walk back. By the time we reached Malavli, we were so tired that we  decided to give the Bhaje caves a miss. (Of course we decided to return to it in our next visit).