Our next destination of the day was the Mehrangarh Fort and so we started. But before we went to the fort, there was one more place to be seen, Jaswanth Thada and so we went to check it first.

Built in 1899 in the memory of Maharaja Jaswant Singh, Jaswant Thada is a beautiful memorial carved in white marble. Sitting pretty over a small pond, this beautiful mausoleum is a an impressive specimen of Rajput architecture, complete with beautifully adorned domes, chhatris, and beautifully carved jaalis. This place is a favorite hangout of pigeons, those they made the area a little messy, the place seemed alive with them. Once you stand in the courtyard of Jaswant Thada, you can great an awesome view of the Mehrangarh fort. 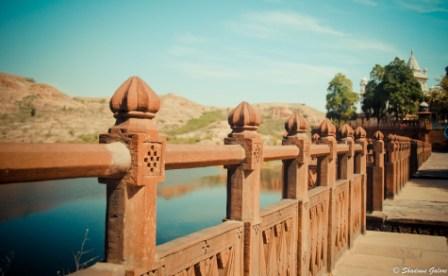 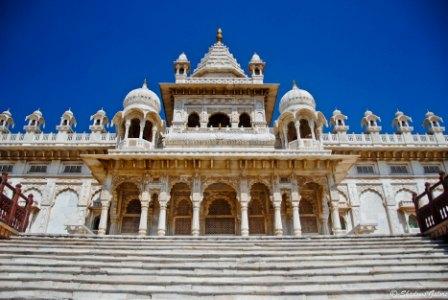 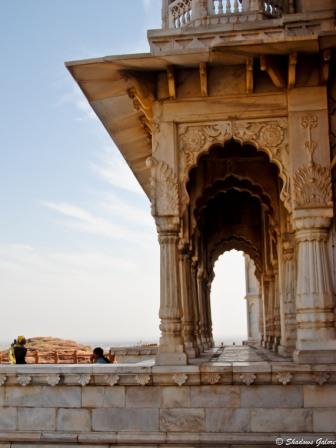 Jaswant Thada is a beautiful monument in white marble

The path which leads to the monument is made of red sandstone. There was a young artist sitting near the steps, playing a beautiful tune from a popular Hindi song on his sarangi. His talent is now safely captured and posted on YouTube.

Driven by the Afghans from their homeland Kannauj, the Rathod Rajputs settled down in the Pali region of Rajasthan in the 12th century. The coming century saw them becoming so powerful that they carved out a kingdom for themselves. In 1481, Rao Jodha decided to build a fort on a rocky hill which rose like a giant mushroom over the surrounding flat lands. The Mehrangarh fort stands at this site today and the city which prospered around is known as Jodhpur. It was to this fort that we were next going to.

Rising almost vertically over the city, Mehrangarh is an impregnable fort of staggering proportions. With battlements as high as 36 mts, this fort remains under the control of the Rathods, a heady mix of royalty and legend. 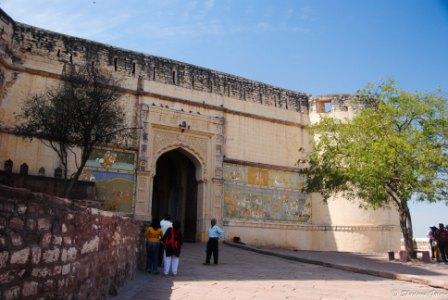 The main entrance of the fort, Jaipol was a small walk from the auto stand. The mighty gate is adorned with beautiful paintings. As one goes in, there is the ticket counter on the left where one can also buy tickets for the camera and hire a guide or rent an audio guide. We decided to hire a ‘human’ guide, a 50-year-old lanky ex-army man with razor-sharp mustache and a swagger which would put youngsters to shame. The only problem was that he tried to hurry us up, and we ended up missing a few places.

The first terrace with Cannons still at their place

Since the fort is quite high, there is actually an elevator which takes you to the top. The idea is to start from the top and then slowly come down. We shared our ride with a group of folk singers who had arrived for the Sufi Festival which was going on in Mehrangarh at that time. The elevator took us to a terrace of some sort with mounted cannons and a great view of the Blue city below. It was from here, that we started our exploration.

There is an interesting legend related to the building of Mehrangarh. When Rao Jodha decided to build his fort on the hill called Bhakurcheeria (The bird’s beak), the lone occupant living on the hill, an elderly hermit had to be displaced. The hermit was obviously not happy with this and put a curse, “Jodha! May your citadel ever suffer a scarcity of water!” To ward off the curse, Rao Jodha built a temple at the place where the hermit lived (still worshiped everyday) and then took the extreme step. A man called Rajiya Meghwal, with the promise that his family would be looked after forever, was buried alive at the foundations. His family still lives in the estate provided by the Rathods. 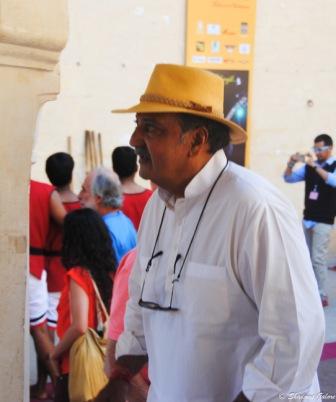 Maharaja Gaj Singh II, our surprise of the day

The path from here led to a courtyard and it was here that we got a big surprise. Our proud guide suddenly became very humble and started doing sajda to a middle-aged gentleman in whites and a hat. We were face to face with the Maharaja of Jodhpur himself! We had heard that he seldom gives public appearance but owing to the festival, he was in the fort, interacting with people. We managed a quick Namaste and he smiled in acknowledgement. Paisa Wasool!

The Rajput Kings are adorned with the title Rana in Mewar, Raja in Amer, Rao in Jodhpur and Rawal In Jaisalmer

It was a day of festivity, musical notes were floating in the air and there were artists all around. At one places singers were singing Rajasthani folk and at some other place the dancers were giving stellar performances. Being there at that time, we were able to fully appreciate the richness of Rajasthan in dance and music, which is as spectacular as its tales of valor. 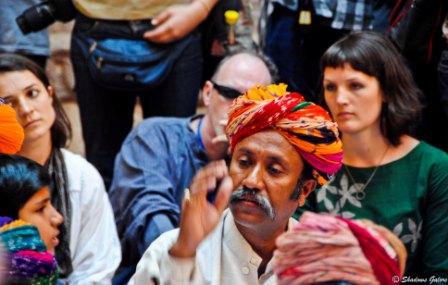 A Folk Singer enchanting tourists with his ballads

Marwari craft is a little different from what we saw in Jaipur and Mewar. The walls, jaalis and jharokhas at Srinagar Chowk are so intricately carved that they look almost delicate for sandstone, giving them a sandal feel. Without the advanced tools of today those artisans, with just their chisels and hammers, were successful in creating sheer poetry in stone. 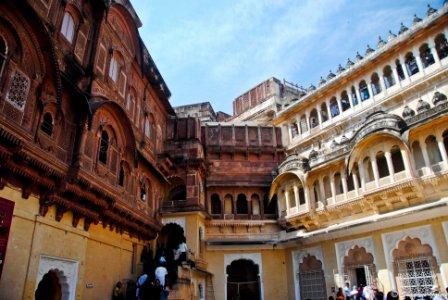 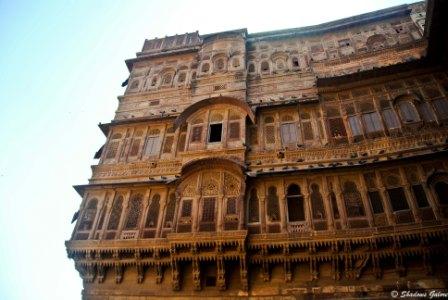 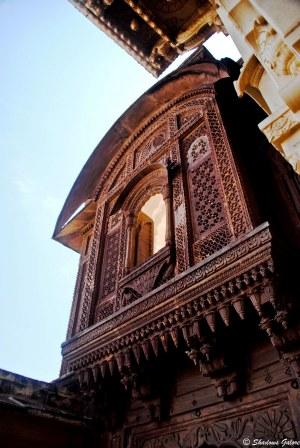 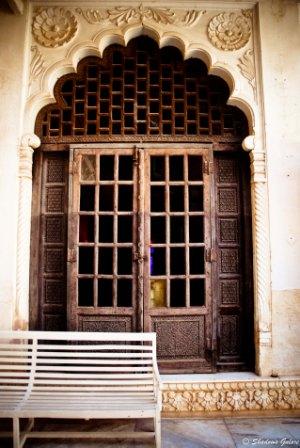 An empty bench and beautiful arches 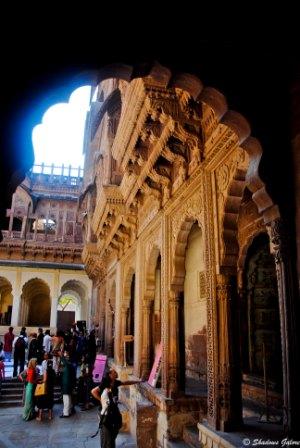 The place was teeming with tourists on this day

The fort has a sizable museum within its walls. There were galleries displaying the artifacts from the bygone era. It started with the display of Elephant howdas and royal palaquins. The galleries at Daulat Khana chowk display clothes, paintings and weapons, including the curved sword of Emperor Akbar. Also, on display were an array of miniature paintings from the Marwar school of art. 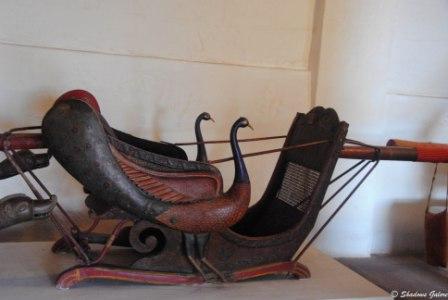 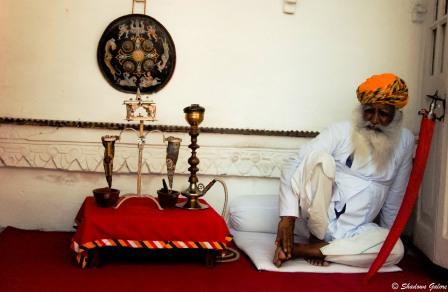 Old Man sitting with the Hukkah

The beautiful Phool Mahal (Flower Palace) has beautiful paintings adorning its walls which depict all the 36 moods of classical ragas. Dating back to 19th century, these paintings took 10 years to be completed. A little ahead is Takhat Vilas, the official residence of Maharaja Takhat Singh. Moti Mahal (Pearl Palace) was the next, which served as the main Darbar hall of the Rathods. This hall is decorated gorgeously with colorful glass. 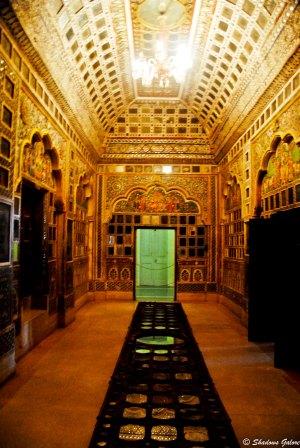 Inside the Sheeshmahal (Glass Palace) 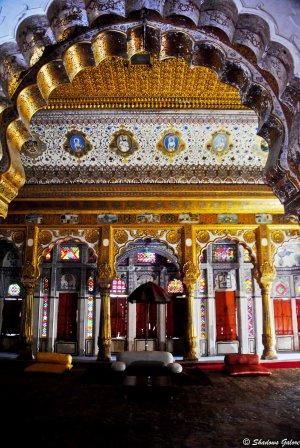 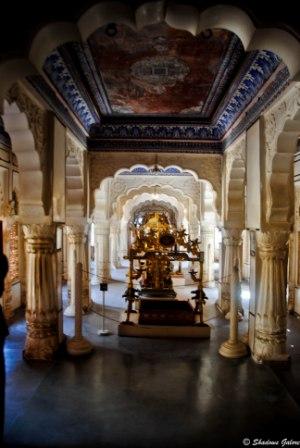 The extensive Zenana (Ladies) quarters with lovely windows from which the 30 odd queens could take a peek at the proceedings in the courtyards. It has a special gallery dedicated to cradles, where beautifully designed cradles for the infant princes and princesses have been kept. 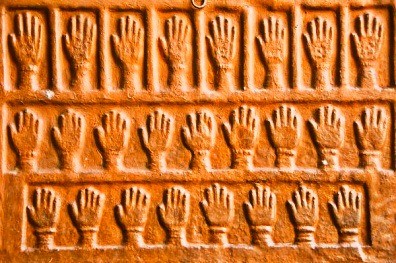 The handprints of queens who had to become sati

Immediately to the left of the Loha Pol (Iron Gate), are a set of hand prints on the wall, left by the widows of the kings before they immolated themselves on the funeral pyre of their husband. These hand prints left on the walls of time are the only reminder left of a horrific tradition. Some of those queens were very young when they had to die… I tried not to think about them. I did not take any photographs either, the one you see has been taken from the Internet. 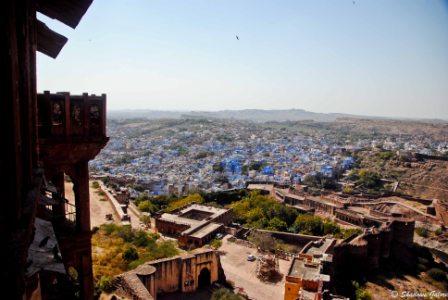 The Blue City, as seen from Mehrangarh

We spent more than 2-3 hours in the fort, even going back to those galleries which we thought we hadn’t seen properly due to our hustling guide. There is a small food stall on the outside where we had some snacks with a group of qawalli singers. A winding lane goes from the fort to the old city of Jodhpur, in use by people from centuries. As dusk approached, we used the same track to go and be one with the Blue city on our last evening there … 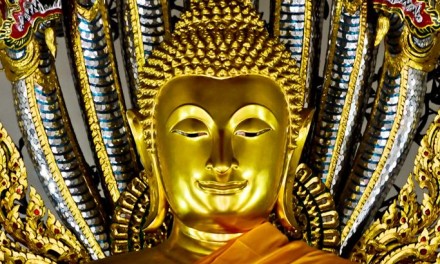 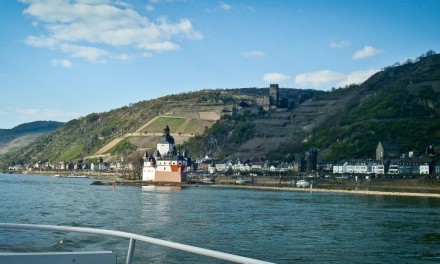 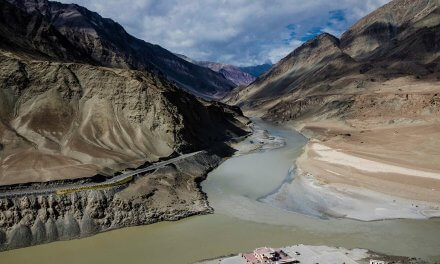 A Day Excursion To The West Of Leh 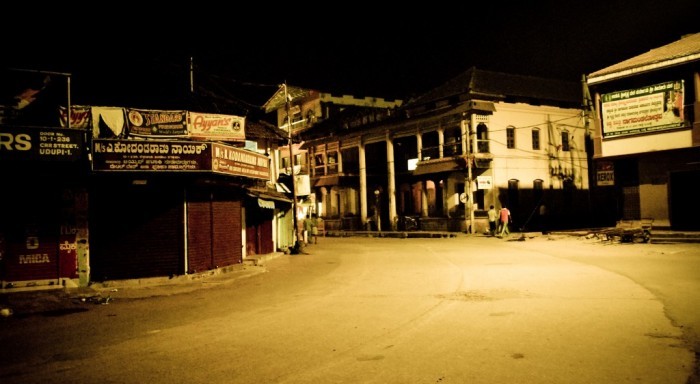