Months ago, when I was watching The Life of Pi, I wondered if India could ever produce a film like it. Yesterday, I got my answer in the Ship of Theseus.

If a ship was repaired, plank-by-plank, to the point where no material from the original remained in the restored craft, does it stay the same?

If the discarded planks are used to create another ship, is it a different one or remains the same?

It is this Theseus paradox of Plutarch, to question what really constitutes identity and authenticity, which sets the premise of this film. A different way to make an Indian film in a country with its obsession for masala and formula flicks. 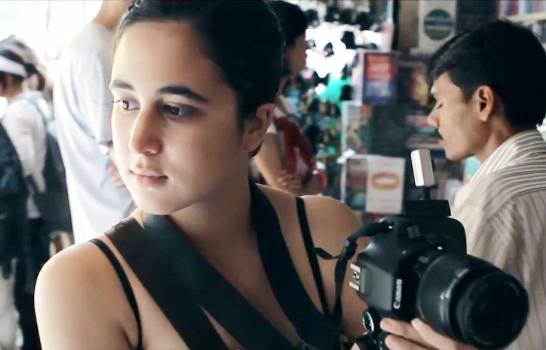 The début film of Anand Gandhi, Ship of Theseus is made of three seemingly disparate stories of individuals going through a defining phase of their lives. The first story is of Aaliya (Aida El Kashef), a girl from Middle East living in Mumbai who takes up photography as her chosen form of art; which is quite good albeit a paradox because she is blind, due to a cornea infection years ago. She listens through her subjects, relies on the sounds and intuition and creates beautiful images. However, the conflict between design and accident in the framing of her photographs lurks in a corner. Her dilemma is compounded when she has a cornea transplant leaving her flooded with the visions of the world around her and robbing her of the tranquil intuition which she had when she could not see with her eyes.  She finds herself struggling with the questions of the real authorship in her earlier work. 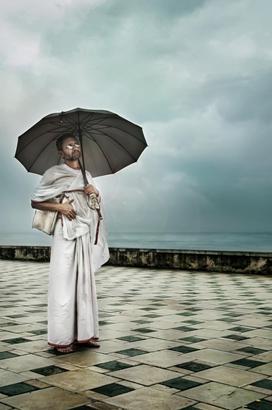 The protagonist of the second story, Matreya (Neeraj Kabi) is a Jain muni, who follows a strict adherence to the principles of non-violence. The soft-spoken monk is fighting a court case against the pharmaceutical companies to abolish  drug and cosmetics trials on animals. However a life threatening liver ailment leaves him on a crossroad where he is forced to question his long-held beliefs and must choose between his principles and death.

Part three features Navin (Sohum Shah), a young stock-trader who has just survived a kidney transplant. As opposed to his intellectual grandmother who is a social activist, Navin is a man of simple beliefs and is unable to appreciate the lofty ideals of revolution and social justice. His life changes when he tumbles upon an information that the kidney he has received might be stolen from a daily wage laborer Shankar. His quest to find the truth and get justice for Shankar takes him to unfamiliar waters; from the slums of Mumbai where a well fed man cannot pass through the narrow streets, to prosperous Stockholm, and into a journey inside his own self.  He reaches a point where he needs to reconsider all he dismissed earlier as useless indulgence of intellectuals.

To say that Ship of Theseus is an unusual film will be a gross understatement. It is something which an average Indian Cinema lover has rarely seen. Coming out of nowhere, you have this man named Anand Gandhi who makes his audience go through the kind of emotions which they did not come ready for. Here is a filmmaker, who acknowledges and appreciates the fact that the audience have brains, and he makes them think. Like a magician, he hypnotises and forces one to introspect; and in such a moment, this film ceases to exist and becomes a tunnel towards self discovery. I know these are big words for a 2.5 hour “Hinglish” film, but  such are the strong emotion this film evokes.

Ship of Theseus is a cinematic feat, the Cinematographer Pankaj Kumar has made sure that the frames that he has captured go beyond just being beautiful and become inspiring for anyone who wants to hold a camera in his hands. It seems he got a film to shoot and turned it into poetry. The vast empty spaces, composition, the closeups and the huge panorama get into a symbiotic relationship with the narration; and with the hauntingly beautiful soundtrack, the final product feels different – not a film in a theater, but maybe somewhere far in the Himalayas, in a monastery with Lamas chanting hymns. The only song (if it can be called so) “Naham Janami kampi Devam na Daivam” (There are no celestial beings I know of, there is no God) is so powerful that it can well be the anthem of charvaka (the atheist part of Hinduism). Interestingly Charvaka is a character in the film who keeps countering the ideology of the Matreya. The dialogues written for the continuous debate between the two are delightfully witty and remarkably insightful at the same time.  The monologues instead of being monotonous, seem to open pages of a book within self, which was hidden till now and has suddenly come to light. 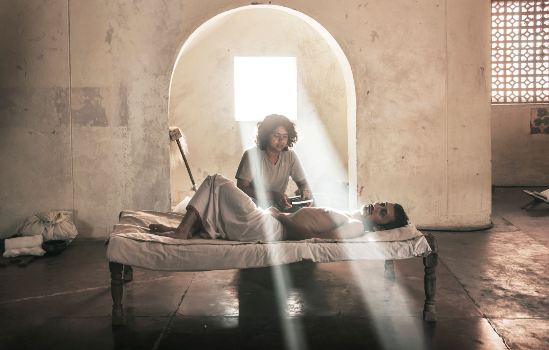 The dialogue between Matreya and Charvaka

Performance wise, the actors are brilliant. Aida, Neeraj and Sohum, the protagonists of the stories have lived their part very well. While Aida is delicate and fiery at the same time, Sohum impresses with the transformation that goes inside him. Of the three, Neeraj Kabi rises above all with his stellar act. He has worked hard to do his part and loses weight to a point where one can actually count his ribs. As his disease consumes him, we can see him wasting in front of our eyes. India hardly needs to look more for the actor of the year award.

Is this review biased? Yes it is, it will be a high treason against my own soul if I try to find faults with the film. Is the film slow? Well, why should the good things in life unnecessarily cut down ? Is the film boring? Only if one’s IQ is the same as a certain Mr Bush. To summarize, Ship of Theseus is the pinnacle of Indian cinema, a challenge to the filmmakers and viewers to look at cinema and life with a different perspective. Not only does the film has a soul, it succeeds in stirring the souls of the ones who are watching it. The day when more films like this are made and do a 100 crore business, India will be a better (and safer) place to live. Go and watch this film if it is playing in a movie theater near you, set out on your own personal pilgrimage.