One Day Sightseeing Trip of London

So you are in London, this is your first trip to the United Kingdom and you have just one day in the city and so much to see! Not a very ideal situation, but it is always to better to make the most of what is in hand. In this post, we will discuss how to get the maximum of London in just one day.

London, the capital of the United Kingdom, is one of the most fabled cities in the world. A one time center of the biggest power in the world, this city has a glorious history dating back to the pre-Roman era. London is located on the river Thames and is a major industrial and economic powerhouse in Europe. The Hethrow Airport connects the to the major destinations in the world. Accommodation is varied, but to find cheap London Hotels, one needs to look a little. Backpackers’ Hostels are other great option. Public Transport is excellent, with the oldest underground railway system in the world. One can also make use of the numerous characteristic red metropolitan buses that ply on the roads. So, the first thing that should be done is to buy a map of the city with the train and bus routes. It is also good to get the timings of the hop-on-hop-off buses plying to the important tourist places.  Do not forget to start early.

In the early morning, you can start with the St. Paul’s Cathedral. Dedicated to Paul the Apostle, this magnificent cathedral is located on the highest natural elevation in London. It happens to be resting place of famous sons of Britannia like Admiral Nelson and Winston Churchill. One can get a panoramic view of London from the Golden Gallery. The Cathedral opens at 8:30 am and a walk around should take 45 minutes.

After the visit to the St. Paul’s Cathedral, go towards the famous Big Ben. This spectacular clock-tower is a sight to behold and truly deserves its place among the most prominent symbols of London. From the Big Ben, you can go to the House of Parliament and enjoy looking at the majestic halls of the seat of England’s Power,  the Queen’s Robing Room, the Royal Gallery, and the Lords Chamber. If you are lucky, you can even witness live debates at the House of Commons. A whole trip to the House of Parliament may cost you a couple of hours and it will most probably be noon by the time you come out. You can consider taking a brief look at the Metro from  the London Eye, cross the Hungerford Bridge and arrive at the Trafalgar Square, the hub of London. Consider catching the heritage Routemaster buses, if available. 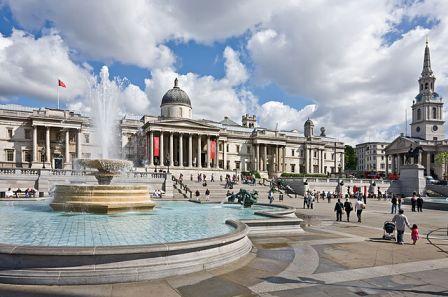 There are many places to have a quick lunch near the Trafalgar Square. You can also walk down to the Martin’s Street and eat at Cafe in the Crypt, a below ground level restaurant with some of the Old London inside it and some good food. After fortifying yourself with food, it is time for the Buckingham Palace, the Office and residence of Her Majesty the Queen. The palace opens for tourists in the summer and you can tour 19 of its numerous rooms and get lost in the grandeur of the British empire. If you are in London on times other than July to September, it will still be a good idea to have a look at the sprawling building.

In Winters, as the Buckingham Palace is closed to public, you will still have some time at this point; you can retrace your steps back to the Trafalgar Square and go to the National Gallery. The galleries of this Art Museum have in them, a rich repository of some of the finest art that has ever been created. A round around the galleries will take around an hour. 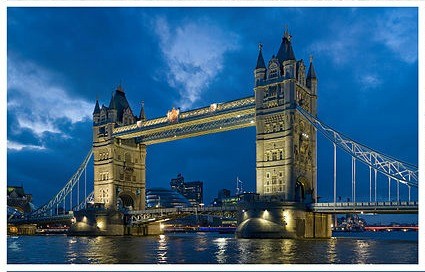 From here, you are mostly on your own till the night falls. You can either go to the Hyde Park, one of the Royal parks at London and hear speeches at the Speaker’s Corner. Or you can choose to go a little farther and visit the (in)famous Tower of London. Built 1000 years ago, this tower can boast of an illustrious if grim past. Built as a Normal Castle, this tower has served as a royal palace, a prison, execution house, armory  a treasury, a menagerie, the home of the Royal Mint, a public records office, and the home of the Crown Jewels of the United Kingdom. The whole history of the British Empire can be seen inside the walls of this tower, not to forget the numerous ghosts who are said to be haunt this place.

It will be evening by the time you are out of the Tower of London. You can go to the iconic Tower Bridge and get a beautiful view of the city by the Thames. From here you can choose to end your tour enjoying the shows at the London Theater (you may need to buy the tickets in advance) or go to happening restaurants or the happening night clubs of the city. Among the nightclubs,  Ministry of Sound is highly recommended. If you are the shopaholic types, you can consider checking out the shopping area at Oxford Street.

So this is pretty much all we can hope to see of London in a day. The choices are many and one needs to choose wisely as time is the limiting factor here. However, to see the city properly, you need more than just a day or two. As Samuel Johnson once quipped, ” When a man is tired of London, he is tired of life; for there is in London all that life can afford.”