An Adventure at the Gir Forest National Park

After having a grueling session of Counter-Strike, four of us went for some snacks nearby. Cursing ourselves for not able to organize a single tour in our 4 years of engineering, we were very determined to correct the statement. Within moments we decided to visit the pride of Gujarat, Asiatic Lions of Sasan Gir. We decided to leave by 8 in the morning but we left at 11 courtesy Harnish Doshi. We reached Gir at 3 after a lunch at Junagadh. Searched and compromised on a low-cost hotel courtesy Vasu Ukani. We visited Devaliya wildlife sanctuary, which is an enclosed area of around 20+ sq. km where they make you travel by bus, and you can see a glimpse of what is inside the Gir forest. 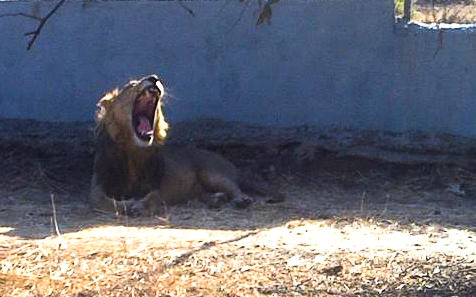 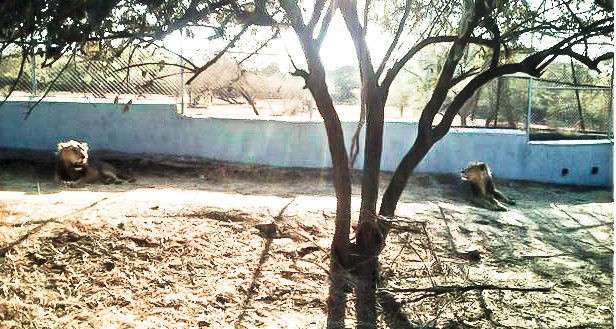 Later that evening after relaxing at the hotel a bit and dinner, we left for a village nearby, the locals having connections with one of us we decided to visit the forest at night on foot with a high probability of spotting a Lion a few meters away! We reached the farm and the darkness and feeling of being inside a Jungle with over 400 Lions is shudder inducing. We could see a Zillion stars up in the sky with artificial light missing, could hear the noise of the jungle and felt like we were camera team from Animal Planet! We stayed put for a few hours and waited to hear the Lion’s roar so we could start walking in its direction but unfortunately the report from the sources indicated absence of Lion in the surrounding. Still for an experience we walked our way into the jungle to a spot where Lions are observed usually. The darkness made it impossible to step precisely on raw roads; the walk was scary with the possibility of being attacked by a Leopard or being caught by forest officials and end up in newspaper being tagged poachers (the whole affair being illegal and strictly punishable). My personal advice to you would be not to come into honey trap of night visits/tours by any guide or hotel personnel, as it is a money making business with fine being up to 50,000. We could not spot Lions anywhere at night and started our returning journey to our hotel, the raw and isolated road along with the ghost stories going on inside the car made it another scary environment.

The next plan was the (legal) emulated safari at dawn, but achieving the permission for it was an uphill task, with the forest department providing only 15 permissions in the morning. So for the 6:30 safari we had to be in queue for achieving the permission at 4:00! A few of us went to Sinh sadan to get the permission and remained successful at it. Soon we were waiting for the gates of the forest to open at 6:30. We felt frosty with sub-zero temperatures and nipping wind being felt in the back of open gypsy (preferable for the safari). Couple of hundred meters in, we spotted 2 trackers (forest officials who track lions) and one of them hitchhiked with us. He gave us the gratifying news of a male lion being close to us, as they had heard the roar just a few minutes ago. We headed for the roar, the tracker made the vehicle stopped by an artificial water pond and soon spotted the paws. He made noises of deer, and as a repercussion the great king of the jungle roared. It is indefinable! That moment clears all your ambiguity about who the real king of the jungle is! Listening at the roar the guide surprised us telling that according to him the Lion was about a km in the jungle, the trackers now united decided to do their job and started heading towards the lion on foot, to remind you it was pitch black! Couple of minutes later one of the tracker screamed out “Aa rio” meaning, here it is! At the closest he stood only a couple of feet from the king. We could hear the roaring at intervals and the guide suggested we move on, as the roars were quietening he said the Lion won’t return. So we moved on deeper into the forest leaving the trackers behind, slowly the sunrays began to protrude through the darkness. We spotted rain-deer, deer, wild boars and peacocks but there was no satisfaction until we saw the lion, and to defy our luck we could see three of them together! They were gorgeous, relaxing in the cool environment after hunting in the dark. 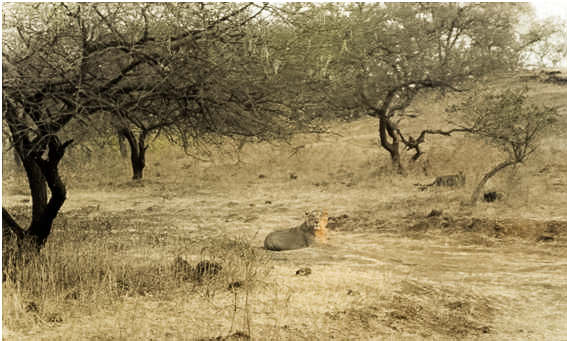 The forest officials made sure discipline was maintained by the visitors, all vehicles were given turns to watch the king for couple of moments. From the breathtaking sight we moved on to Kamleshwar dam which had little water thanks to the scarce monsoon in Saurashtra, but the rising sun posed perfectly in order to create a pleasurable portrait. We had a 10 minute halt at the dam and after a session of photography moved on back into the town and the memorable safari came to an end.

It’s a place you must visit in your lifetime! The Gir national park is open from mid-October to mid-June. I insist you pre-book your journey, hotel and safari as early as a month before travel to avoid long wait in queue for the entry permission.

IT Engineer from Rajkot, Gujarat. A CAT aspirant, loves traveling and adventure activities when he gets some time off his daily chores. Gourmet, an avid reader and a self confessed movie maniac. Catch him on his blog : http://www.funnyjokeslol.com