Hampi Diaries – A Guided Tour of the Sacred Center

Our appointment was at 9:30 AM with our tour guide Krishna, who we had met the evening before. So at 9:30 AM sharp, we reached Virupaksha Temple where we were supposed to meet him. We were a total of six, us, a Swedish couple and two guys from Hyderabad. One of the Hyderabadis turned out to be a friend who I used to know during my engineering days in Chennai; it’s a small world indeed. 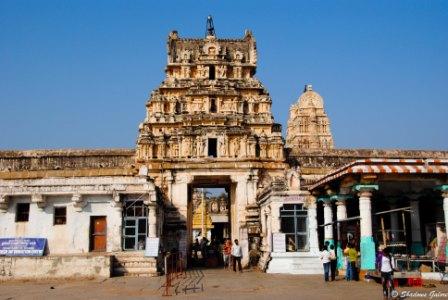 Virupaksha Temple, from where the Guided tours usually start

Our tour started with the Royal Ganesha, a seven meter high giant idol of Lord Ganesha carved out of a single rock. The temple was built around the idol. However, it was not a temple anymore, as the guide explained, Hindus do not worship broken idols. 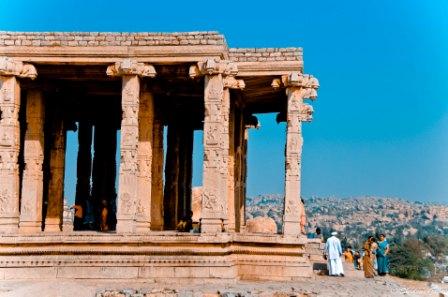 Temple of the Royal Ganesha 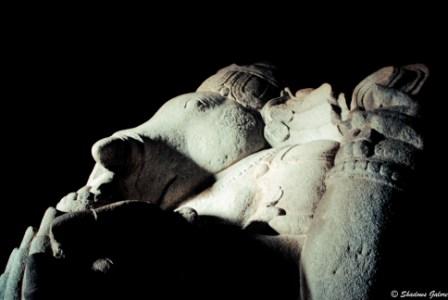 After the Royal Ganesha, we went to see what is interestingly called the Mustard Ganesha. Since the Royal Ganesha was reserved only for the royalty, a mustard merchant got this Ganesha made so that common people could visit it and have darshan. This Ganesha was unique in a way, if you behind the idol, you can see the figure of a woman at the back. The son Ganehsa actually sits on the lap of his mother Parvati in this depiction. 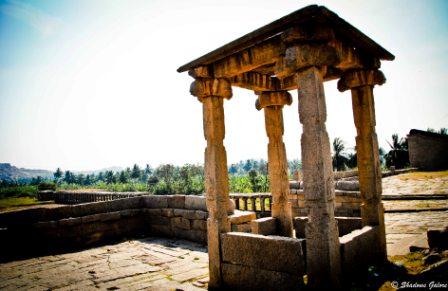 A view of the Spice Market from the Balakrishna Temple 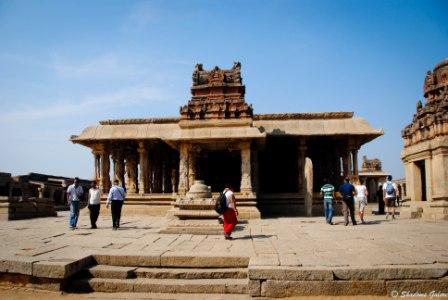 The Inner sanctum of the Balakrishna Temple

Beautiful Carvings inside the Balakrishna Temple

From the Mustard Ganesha, we went to the Balakrishna Temple, an exquisitely carved temple which dedicated to Baby Krishna which was constructed to commemorate Krishnadevaraya’s victory over Odissa in 1513 AD. The temple had beautiful mandapas supported on intricately carved pillars depicting flowers, mythical animals and scenes from Krishna’s life. The gopura had reliefs of Vijayanagara armies chasing the vanquished enemy. 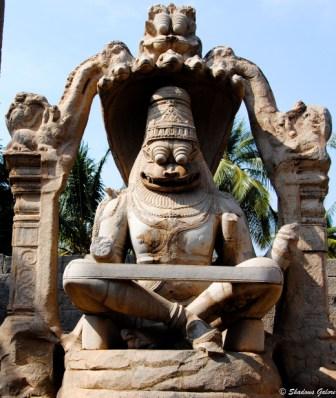 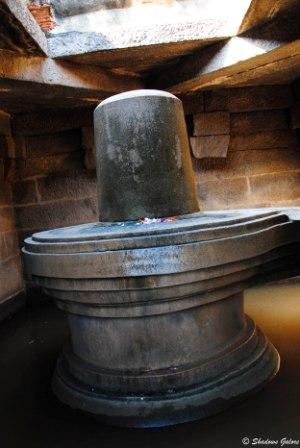 The Lakshmi Narasimha and Badavalinga Shiva were the next two stops we took before starting off to the Royal enclosure. Narasimha was another giant and impressive idol of Vishnu in his Narasimha avatar. Sheltered under the giant Sheshanag, Narasimha looked very fierce. It is said that a figure of Lakshmi was originally sitting on the lap of Narasimha, but now it was almost completely gone with just a beautifully sculptured hand around Narasimha’s waist left intact. The Siva was a huge lingam said to be commissioned by a poor old woman with her life’s savings. The lingam was intact with its base permanently under water. 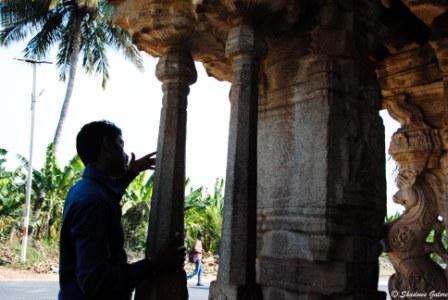 Our guide giving a demonstration of the Musical pillars

From here we started towards the Royal Enclosure which lies around 3-4 km away. But in the way, there was another thing to be seen – Musical pillar. We passed by many ruined temples and buildings in various states of disrepair and stopped at a roadside temple. The sanctum was locked up and was almost tumbling down and only the front porch was open for visitors. Here the guide showed us stone columns which gave musical sounds of tabla and ghatakam when tapped. It indeed worked and we were left amazed at this little piece of master-craftsmanship from ancient India!

The last stop before we entered the Royal Enclosure was the Underground Temple. Well, it is not an Underground Temple as per se. Just that, the surrounding ground level has risen, sinking the temple below and hence the name. The temple was good in the middle of a lush green lawn. But a bigger part of it was under not so clean water so we did not venture much inside. There is another temple in the vicinity called the Hazaar Rama Temple but for some strange reasons, the guide decided to give it a miss.

Next in our Hampi Diaries – The Royal Enclosure …

You can find the map of the sacred center here.

For more and better resolution photographs, please go to Hampi Diaries – A Guided Tour of the Sacred Area, a set on Flickr.