Day 2 started early. Ekta woke me up at 6:30 AM shouting that the sun will be up. Well it turned out that sun was already up by that time. Anyway, we got ready in a hurry and got out for our morning photography trip. Our first stop was the bank of Tungabhadra. Since it was a Sunday morning, the ghats of Hampi were packed with tourists, school kids etc who had just arrived on an excursion. While we stood there staring at the people, I looked at Ekta’s face. She did not look in a very good mood; I asked why and she replied, “Because there is nothing interesting here!” So we chucked the idea of taking photos of the river and set out for our next target, which we had missed the day before – the Matanga hills. 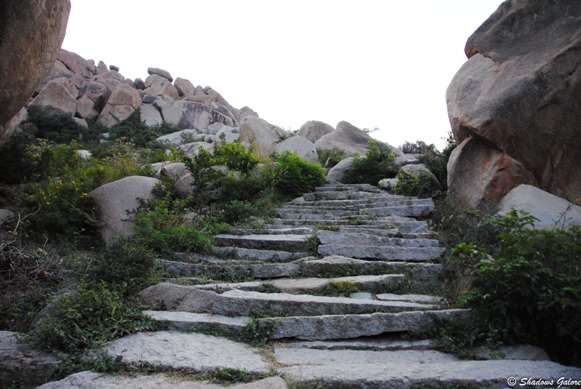 So we reached the foothills again and then started climbing. The weather was quite cool and it was definitely better than before. We got lost at a couple of points but some helpful soul had made arrow marks leading to the hill. After a point it was another flight of steep stone steps going up, but this time it was in a better shape and did not appear life threatening. As we went up, we could see the panoramic view of the valley below. We could see a temple below us which I incorrectly identified as the Achutaraya Temple. It turned out to be the Balakrishna temple. More about it later… 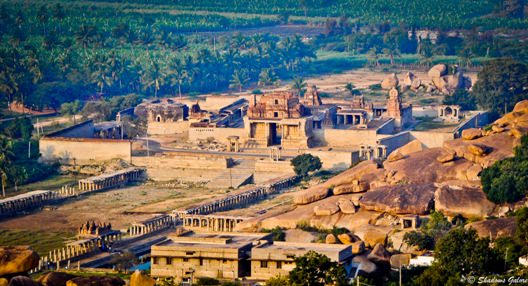 Balakrishna Temple and the market, as we saw it from the Matanga Hill 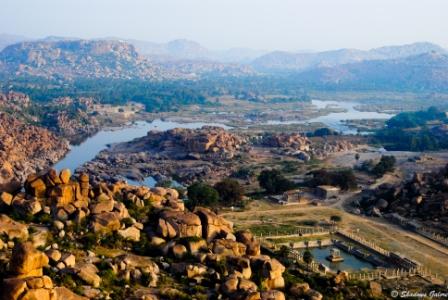 View of the valley from another side, shows Pushkarani, a part of Courtesan street, Varaha Temple, Ancient bridge  and the Tungabhadra river winding around the boulders

We climbed and climbed and did not stop till we were completely out of breath. Either age is catching up with me or IT has made me completely useless. It took us another 30 minutes for us to scale the 500 odd steps and reach the top. It turned out that the hike was worth the effort. The 360-degree view of the Hampi town and various sites around it was fabulous in the rays of the morning sun. To add to it, we were getting a good mobile signal and we were able to check emails, SMS, Facebook updates etc. 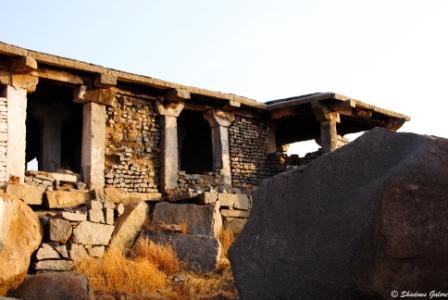 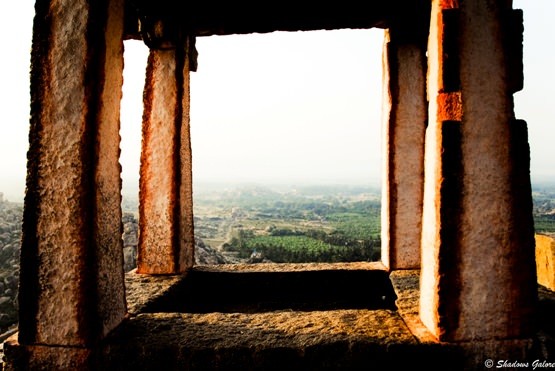 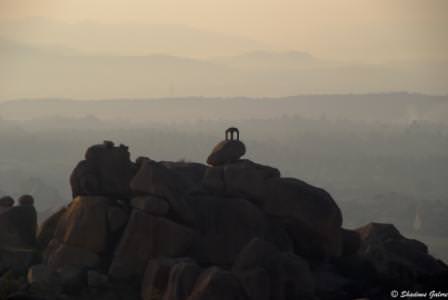 On the top, there was a big building marked as the ashrama of the Matanga Rishi. There were three stone mandapas under one of which we sat down to rest.  Then we ventured into the ashrama; it was a spooky place with lots of pillars and rooms, galleries leading to the abyss below and a temple of Kali in the middle. The place looked deserted but there were signs that someone had lived there till recent. There were viewpoints from where one could get a panoramic view of what lied beneath – a photographer’s delight! We spent a lot of time taking photographs and then started our descent. At the foothills, a path led to the river but we had no time for it as we were getting late for an appointment. More about that appointment and rest of our day in the next post…

Hampi Diaries – The Early Morning Trek, a set on Flickr. 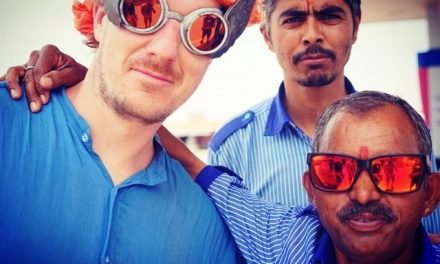 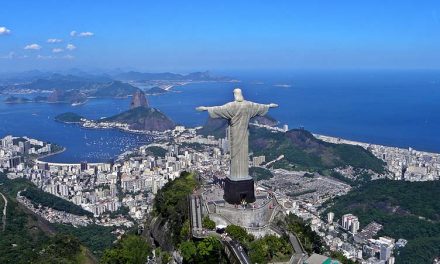 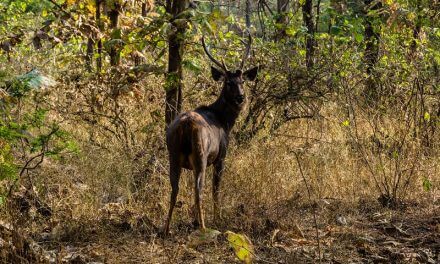 A Diary From The Jungles Of Panna 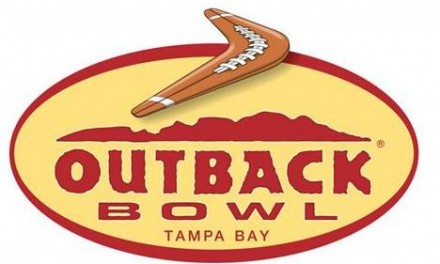