Ever since I read the funny tales of Tenaliram and Krishnadevaraya in the children’s magazine Nandan years back, Vijayanagar has held its place in my to visit lists. So this Christmas vacation, when Ekta made me an offer, that we visit Hampi – the once mighty capital of the Vijayanagara Empire, I could not refuse.

So on the morning of 22 Dec 2012, after a 10 hour bus journey, we were in Hospet, the town nearest to Hampi. The journey was rather uneventful except that I hardly got any sleep and Ekta slept throughout the journey. We reached Hospet at around 9 AM and took an auto to reach Hampi which is around 15 km away.

On reaching the Hampi village, the first sight that greets you is of the Tungabhadra River running parallel to the serpentine road flanked by a vast sea of mighty boulders in the background. Boats run across the river to go to the other side. It is a tranquil little place and we had no problem in finding our guest house and renting a bike. Interestingly we came to know that Liquor or Non Vegetarian food is not allowed within the boundaries of Hampi. Ekta was elated and I, heartbroken. 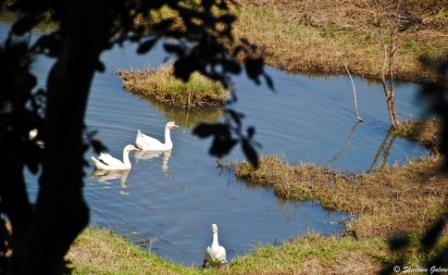 Ducks swimming in the Tungabhadra waters, as we saw them sitting in the Mango Tree

Since we were famished, after some rest we immediately set out to find some food – in the direction of the famous Mango Tree Restaurant. It’s a beautiful place on the banks of Tungabhadra, set under the shade of a giant mango tree. The path to the restaurant winds through a banana plantation and one needs to remove the footwear to enter the restaurant. It is a place where you can sit on mats in the open and enjoy the view of the Hampi boulders and the riverfront with trees all around while having your meal.I had been craving for South Indian food ever since coming from Chennai and settled for a Thali while Ekta tried the “Israeli” Humus and Falafel with Chapati. Served on Banana leaves, the food was delicious. 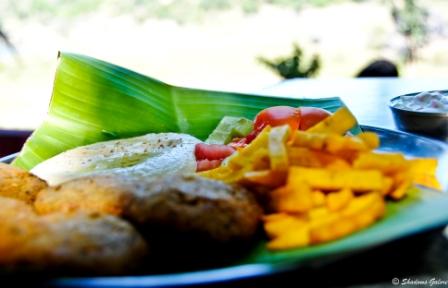 Israeli Food served on Banana leaves. A delicious fusion of India and the World at the Mango Tree Restaurant

After the lunch, we were ready to do some exploration of our own. So we set out on the path suggested by locals and soon found ourselves in the middle of the Hampi Bazaar. On both sides of the main street were lines of stone structures which once made the main bazaar of Hampi. Ironically it was a living market till the beginning of this year but was the shops running in these structures were demolished by the government to “return the place to its original condition”. Seems Tughlaq still lives in the corridors of power of our republic.

A view of the Hampi Bazaar with the Virupaksha Temple in the background and Hemakuta hill on the left.

At the far end of the bazaar were a big monolithic Nandi and a giant flight of stone steps going up. As we climbed up those stairs, we could see a panoramic view of The Hampi Market and the shikhara of the Virupaksha temple at a distance. This was the view of the city center of one of the mightiest Hindu empires in Indian history. 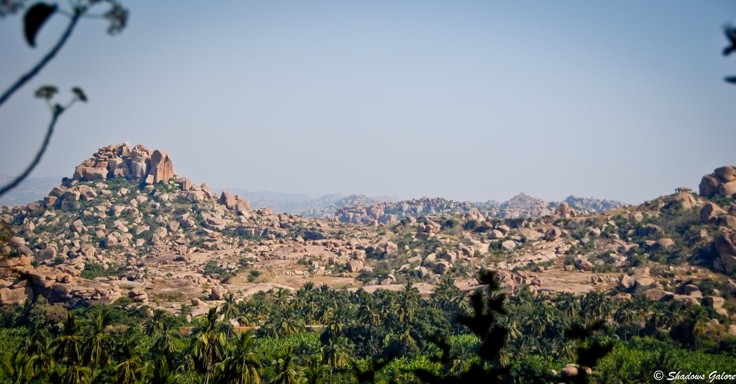 The Mighty Boulders of Hampi

Once we were on the top of the steps, we were able to finally appreciate the beauty of these famed rock formations, known as the Hampi boulders. Huge rocks shaped by winds over millenniums flanked us from every direction and I felt so insignificant in front of them. Maybe this is why ancient sages went to mountains in search of peace. One’s ego melts away when confronted by these mighty rocks which have seen empires rising and falling, countless humans passing by…

Achutaraya Temple, as we first saw it down in the valley

There was a small Hanuman temple on the top and there was a one old lady sitting there who after seeing us, went inside the temple and came out with tilak to put on our foreheads. On the horizon, we could see more mountains and as I went to the edge, was taken by surprise. The ruins of a large temple emerged in the valley beneath like the Flying Dutchman. Even from this height we could tell that this was something magnificent. We scurried downwards towards it. 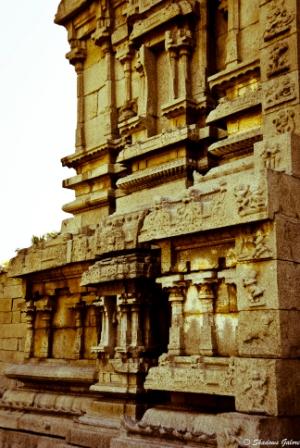 Carvings on the walls

The temple we accidently found was the Achutaraya temple built in the 15th century and we had stumbled upon it from the wrong direction.  The outer structures of the temple were in a rundown condition but the inner sanctum was quite well preserved. There were intricate carvings on the walls and throughout the base of the temple were bold reliefs depicting scenes from battle, with elephants, camels, horses and infantry. I noticed that there were two distinct campuses and while the bases of the Gopurams were made of stone, the superstructure was made of brick and lime. I was not sure that this was the same architecture I had seen in the temples of Kanchipuram and Madurai. Later, while I was reading the ASI guidebook on Hampi, came to know that this was a distinct style of Vijayanagar. In front of the temple was another line of ancient shops, which I later learnt was known as the courtesans street. But in ignorance, we did not pay much attention to it. 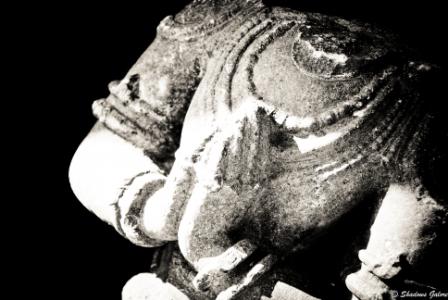 A decapitated figurine found in a corner in the Achutaraya Temple

After spending some time in the Achutaraya temple, we decided to go along a trail in the rocks which we believed went to the top Matanga Hills. This trail was actually another flight of stone steps, but was in a rundown condition with many of the steps having fallen down. We kept climbing in the hot sun till we were almost under the peak of the mountain. 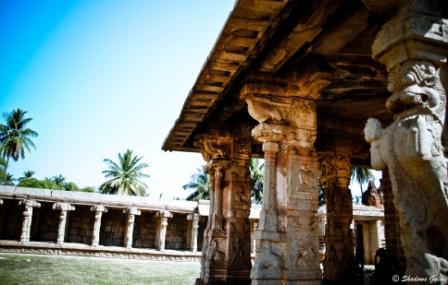 However, at this point, the path became very dangerous and the probability of us slipping and falling down became disproportionately high. Being a married man now, I did not risk the lives of myself and my brand new wife and forced her to turn back. The descent was more difficult than the climb but we managed somehow. We would never know how close we were to success before we quit, but we will try it from a more proper route tomorrow.

By this time, the hot sun and physical exercise had taken its toll and we were very tired. So we came back to our guest house to take rest for an hour. That “an hour” became four hours and by the time we woke up, it was dark. So we visited the local market. The market is as small as the village but sells quite a few curiosities. Ekta got enamored with some camel and yak leather bags. Dunno how genuine they are but they were colorful and rather expensive. Although she did not buy them today, I have a gut feeling that we are going back with one.

This was a short day, and after a dinner again at Mango Tree we are back at the guest house to rest and plan the rest of the trip….