Nineteenth-century Europe, from Turin to Prague to Paris, abounds with ghastly and the mysterious. Conspiracies rule history. Jesuits plot against Freemasons. Italian priests are strangled with their own intestines. French criminals plan bombings by day and celebrate black masses by night. Every nation has its own secret service, perpetrating forgeries, plots, and massacres. From the unification of Italy to the Paris Commune to the Dreyfus Affair to the notorious forgery ‘The Protocol of the Elders of Zion’, Europe is in tumult and everyone needs a scapegoat…

‘The Prague Cemetery’ starts in the Paris of the dying years of the 19th century. Captain Simonini, a bilious old man, sits on his table on the first floor of his Curio shop, writing a diary which he someday hopes to get published. Strange things are happening around him; there is someone, an abbot, who comes in and goes out of his house at will and while Simonini is aware of his presence by his the clerics notes in his own diary, he is never able to catch him. Worse,  the old man cannot say for sure whether this cleric, who wears a false beard for some obscure reasons, is a real man of cloth, an impostor or his alter ego.

More macabre than the Simonini-Abbot hide and seek is what they have been scribbling in the diary. A look at the names being thrown in would put anyone remotely converse with the of 19th Century Europe ill at ease. Napoleon, Robespierre, Mazzini, Garibaldi .. the diary talks about the men who once shook Europe with their audacity. Negotiating its way thorough conspiracies of the secret societies and the states, treachery, revolutions and counter revolutions, the narrative goes on to unveil the biggest forgery of all times – a document which played a pivotal role in the politics of the 19th century and the bloodbaths of the 20th.

“Truth is stranger than Fiction” – this oft repeated cliche is taken to a new paradigm by Umberto Eco in his novel. Based on true events and persons, this story is woven around an infamous fiction created in the 19th century, which was plagiarized from the works of  authors from an earlier era such as Augustin Barruel, Eugène Sue and Alexandre Dumas. Why was this fiction important? Because not only did it change the political face of Europe, but it is also said to have been what Hitler claimed as the Nazi’s warrant for the  genocide of the Jews much later in the 1940s.

The Prague Cemetery is a difficult read, not because of the quality of the content but because of the sheer magnitude of the burden of history it puts on the shoulders of the reader. This is a repository of manuscripts, diaries, letters and even forged documents and can be quite complicated. A degree in the history of 19th century Europe, literature of the 19th century France and psychology of Freud may come handy for the reader. The fact that this is a translation doesn’t make things any better.

The density of the novel, like an over possessive lover, demands undivided attention. It grows on you like the darkness of the night with black fangs. This is darker than the blackest satire, even the illustrations make the reader uneasy.  One finds himself in the middle of all that was dark and vile within Europe and is a helpless onlooker as the protagonist bulldozes his way through catastrophic events in his lust for what one might never understand. To call the novel politically incorrect will be an understatement, it is cringe-worthy. Simonini is not just a racist, a trait which he inherited from his Jew-phobic grandfather, but he is also amoral, misogynist and a misanthrope; someone who can  kill without remorse, or even without a clear reason other than that the victim was of more use to him dead than alive. 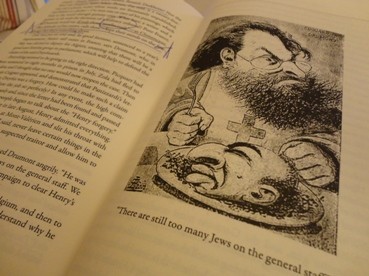 “There are still too many Jews ..”

Eco is an accomplished story teller with an amazing grasp over history and language. The narration at first may seem coarse to the reader, but with the turning of pages, it slowly sinks in that there is nothing which is without a reason. The author knows what is he doing and he plays well; yes ‘play’ is the word. He seems to have a good reason for everything. Once the reader overcomes the shock and disgust due to all the venom being spit out towards different nationalities and races, it dawns on him what the author is actually hinting at. The novel is not just a lesson in history, hatred and Antisemitism but it also gives an insight on how entire races can so easily be made to look like a villain responsible for all that is wrong with the world and pushed into persecution. As the Russian says at a point, “We need an enemy to give people hope… “- not very different from what we have even now in the national and regional politics, the compulsion of the powerful to demonize certain sections of the society in order to remain relevant in the eyes of the rest.

However, I do get concerned about the readers who might not be able to understand the dark sarcasm of the novel and may take it at its face value. What will they make of it ? What if this book becomes the opposite of what it intends to be?

As a footnote, I would just say that The Prague Cemetery is not for everyone. For someone who is not interested in history, who is not bothered to look under the carpets of time, and who has got no patience .. there is always Dan Brown to go to. But for someone who thinks he is an intelligent reader and needs to read an intelligent literature from an intelligent author, let me present Dr. Umberto Eco.