Lomography – What’s it all about?

So you’ve been hearing this term lomography a lot these days. What with instagram and other mobile apps and even desktop apps competing to get the most authentic ‘lomo’ style filter, you might be losing track of what it really is. So, lomography…I guess it refers to any photograph that looks ‘different’ to what we consider a normal photograph? No, that doesn’t sound quite right, does it? No, lomography, or alternative photography, is basically a culture, a lifestyle, a methodology, of how you take this photograph. It consists of no rules, no boundaries, no limitations – the idea is to simply have fun taking pictures. You don’t worry about quality…you don’t think about any ‘rules’…you don’t think of lighting, shadow, exposure…you don’t care about your gear…you just shoot. The motto of Lomography is “don’t think, just shoot”. That kinda puts it in a nutshell, don’t you think?

Lomography has now come to be identified by the type of lo-fi, low quality, funky images that old toy film cameras used to produce back in the day. Low quality, quirky images that actually suffer from many actual defects due to poor optics, such as heavy corner vignetting, overly saturated colors, light streaks caused by light leaks from the camera body – defects which are now considered desirable in cameras that are bought for this purpose. The term Lomo comes from the manufacturer of the ORIGINAL Russian Lomo camera, the LC-A, made by the Leningrad Optical Mechanical Amalgamation (LOMO). This was the birth of popular lomography, I believe, when this toy camera’s interesting and unique image quality and style got people hooked. However, cameras such as the Diana existed before, although lacking in popularity compared to when the LC-A was in its heyday

The newer Lomo cameras such as the Lomo LC-A+, and other toy cameras, are now produced by the Lomography community, and include many models, including the remake of the old Diana, the Diana F+. Holga is another company that has been making toy cameras for a long time, and they remain very popular among lomographers. They all take pretty cool lomographs

Most current lomographers tend to use these toy film cameras – if a big DSLR is considered normal, then I guess a little film toy camera is ‘alternative’? Something like that, indeed. Here are some couple of toy film cameras that I own: 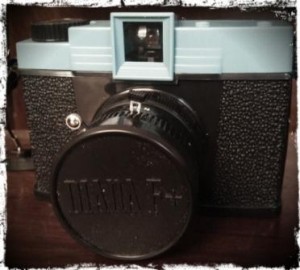 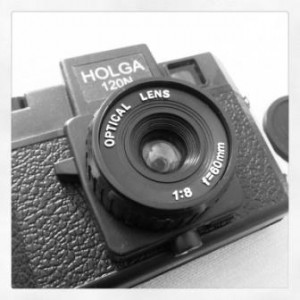 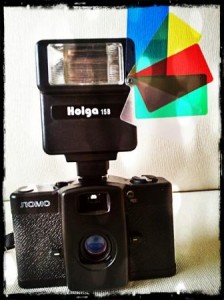 Pretty cool, don’t you think? Insanely fun to use too. I mean, with digital cameras, or even SLR film cameras, I find myself always checking settings, composition, regularly checking the previous shot on the LCD to make sure I got it right…thinking about aperture/shutter speed and other stuff. With some cameras, from my collection the Diana and the Holga, they shoot at ONE exposure setting. It’s got one shutter speed, and an ‘aperture’ control that’s based on available light. I shot an entire roll of film on my Holga with just one aperture and one shutter speed…and every single shot turned out exposed well. It’s insane…and insanely fun to use!

But technically, you don’t need to use one of these film cameras to shoot lomo. I mean, that would defeat the purpose of not caring about your gear, right? However, the true lomo-style images can only really be got by using one of these toy cameras. You could shoot digital and replicate the look using digital filters that are found on most compact cameras these days, or even on Photoshop. That’s still alright if you allow yourself the freedom of shooting that toy cameras allow. But seriously, these toys are so cheap…you could get a Holga for $20…I’m sure that buying lomo gear will not be the thing stopping you from this art

Ok, so…grab that camera, and get out there and shoot. Without thinking, of course. Let your eyes guide you…not your mind. You could shoot a trash can, you could shoot a street sign…you could shoot your dog, your mom, your front door. Don’t bother looking through the viewfinder for great composition (finders on these cameras don’t work great anyway) – trying shooting from off your hip, from above your head, from the level of your feet…it doesn’t matter. Try double exposures, try panoramas, and don’t worry about how you do it. It’ll all come out good…it’s lomography!

And the results – oh well, the results are always fun…and sometimes they can be really, really spectacular. Or at least really nice. Or fun, at least. They’ll be great shots, not in your traditional high quality way, but in the lo-fi, quirky lomo way. It could be severely grainy, it could be overexposed, oversaturated, vignetted, but all that put together with the haphazard shooting style that lomographers should have, it’ll look beautiful. These are a few of mine that I kinda like: 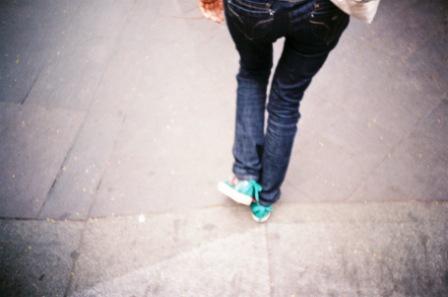 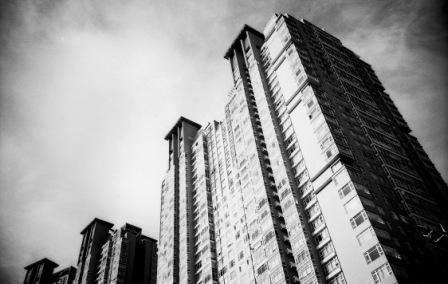 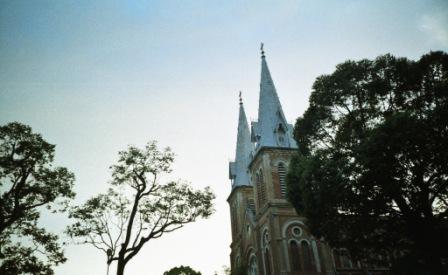 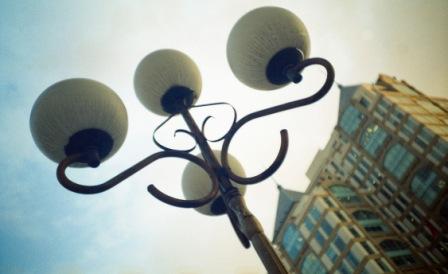 Pretty cool for a piece of plastic with a plastic lens, don’t you think? And if you’re into even wackier, weirder stuff, there’s more you can do. Cross processing film is a commonly used technique in lomography, which usually results in images that look even crazier than usual – usually increasing contrast, grain, and most importantly giving weird color casts all over your image. It can look great, it can look bad…it’s unpredictable, and that’s how it is. It is done by using slide film instead of usual negative film…but instead of processing the slide film in E6 chemicals, which is what slide film needs to be processed in, cross processing involves the use of C41 chemicals, which is used to develop negative film, not slide. So basically, you develop slide film as negative film – the results are unpredictable, weird, and sometimes really cool. It’s a bit risky, but hey, who cares?! Just do a quick google for ‘cross processing’ or similar, and you’ll get the idea of what I mean

Another example of getting more ‘alternative’ images from your lomo camera is to use expired film. Expired film can give images with higher contrast, more grain, extra saturation of colors, and a generally darker tone in the images (from my experience, at least) compared to normal film. It is generally a safer bet than cross processing, although still unpredictable…but if you don’t have the heart to go all out for cross processing, try expired film – again, a quick google should give you an idea of what’s possible with this method

Ok, so that’s all I have for you on Lomography/alternative photography, what you might like to call it. Someone once told me to that these two terms are not interchangeable, and that I should do more research before I write. I told him he’s completely missed the point of what I was trying to say. You don’t care about lomography, much less care about which term you use to describe it.  Anyway, I hope you got what I was trying to explain here. And I certainly hope I’ve got you excited enough to go out and get a cheap film camera and shoot the life around you. Don’t be disappointed if your first couple of rolls are not great, mine were absolute disasters. Keep shooting, and stop thinking. It’s been great doing this guest post here at Shadows Galore, thanks to Puru for giving me the opportunity. If you’d like to check out more of my work, I’m the main blogger over at pixelogist.me – have a look, and leave me a comment. If you got any thoughts, questions, comments…the comment box below is for that! Please leave one. Or you could contact me directly too. Thanks for reading!