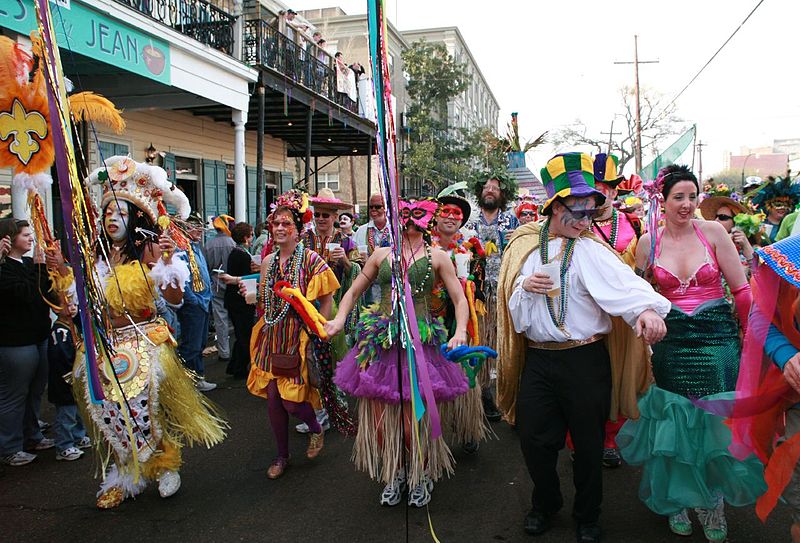 If you are in the vicinity of New Orléans, USA during the first week of February, it will be blasphemous to leave without attending the “Fat Tuesday”, known popularly as Mardi Gras. Brought to the American soil by early French Settlers, Mardi Gras is the season of beads, carnivals and king cake parties.  This has traditionally been the time when the Christian season of Lent starts, and young belles came out of their homes at debutante balls amidst fun, frolic, and comic masquerading.

The Mardi Gras festivities in New Orléans are main concentrated on the Bourbon Street and the French Quarter. The parades originate in the Uptown Districts and pass through St. Charles Avenue and Canal Street.

The parades are organized by associations known as Krews. During the parade, the Krew members wear masks and exotic props and toss throw on the crowds of spectators; the most common things being string of colorful beads, doubloons and toys.

Inexpensive strings of beads are the most popular throws that are used by the parade goers. Starting with glass beads mostly made in Czechoslovakia, nowadays people have started preferring larger, brighter metallic beads complete with figurines. Some Krews have also started bringing custom limited edition beads like those found in beadsbarn. In spite of changing tastes of people, beads thus continue to symbolize Mardi Gras even today.

The weekend before Mardi Gras starts giving an indication for what is store in the week ahead. People start arriving and the population of New Orléans more than doubles in these days. The Thursday Night features an all women parade which has attained a cult following with its political themes and much sought after throws.

The day before the Fat Tuesday is known as Lundi Gras (Fat Monday). The Krews arrive at the Mississippi riverside and the parade starts. This parade features Krewe of Rox and Krew of Proteus, one of the oldest krewes still performing.

The Mardi Gras day starts early with the Zulu parade marching through the Uptown followed by the Rex Parade. As both the parades end at the Canal Street, a number of smaller krews follow them. A number of other parades happen throughout the city and festivities continue from dawn to dusk with an electrifying atmosphere. The fun continues till the people are too tired to carry on any further.

So if you are new to America and live within travelling distance of New Orléans, makes sure that you are at the right place on the right time. Make your plans for the Fat Tuesday in 2013. You will not regret it. 🙂