‘Madagascar 3 : Europe’s most wanted’ starts where Madagascar 2 ended. Alex, Marty, Gloria, and Melma are still trying to go back to their home, the zoo in New York.  Ditched by the penguins and the chimps, they have been left stranded in Africa and it seems like they will remain forever in the barren plains of the continent. However, all is not lost as Alex still has hope, and more important, a plan. 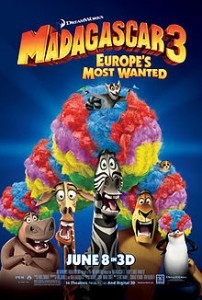 So, here starts the big adventure; together with their regular bunch of cute animals, they make a “stealth” entry in Monte Carlo to kidnap the penguins and the chimps and they sneak to America. However, things don’t go very well, the kidnap plan goes kaput and worse, a totally anti animal Supercop started chasing the gang for Alex’s head (literally). They flee, get a shelter in a circus, and start a run through the Europe which to be modest, can be termed as merely – phenomenal. So this is Madagascar 3, the blazing trail of hide and seek, super exciting chase, and mind-boggling fun. Be ready to see the unexpected: penguins flying a ship, nuclear reactor run automobiles and a flying zebra splashing the colors of a rainbow !

Madagascar is a thrill to watch. The chasing scenes will keep you at the edge of your seats and the funny ones will have you in rolling in laughter. It feels so good to watch a movie well made. The visuals are breath-taking and the 3D effect takes the eye-popping actions to even greater heights. The “ensemble cast” along with the supporting crew of a Siberian tiger, cheetah, seal, elephants, beers etc are a delight to watch. The theme of the film goes close to the heart depicting the struggle and success of the underdogs, a bit of a clichéd Americano in character, but then who cares !

The scene which nearly took my breath away was the one where the all animal circus delivers its first performance.  The riot of lights, colors and amazing actions transport you to a surreal trance. That was a defining moment when I got my “paisa wasool”. 😛

Enough words ! To keep it short and sweet, Madagascar is an entertaining watch if you want to have a fun time during the weekend. If you are a family guy with kids, not taking them to this movie will be blasphemous. So grab your tickets and bring ’em on ! 🙂