River of Smoke is the second in the Opium Trilogy by Amitav Ghosh, of which Sea of Poppies was the first part. This historical fiction was released in 2011. 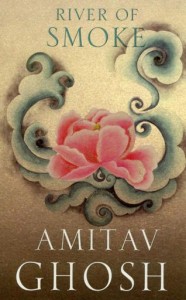 The novel starts from where the Sea of Poppies ends, almost. It actually starts some 30-40 years after the Ibis reaches Mauritious. However. the story stays in the new shrine of Deeti only briefly and then moves on to a totally different paradigm and follows the soul of the first novel, Opium trade, goes all the way to South east Asia and then deeper onto the coasts of Imperial China, to the city of Canton.

These are volatile times in Canton. The Chinese government is set to ban the Opium trade which is destroying the indigenous population and the European traders are adamant on not to stop bringing more and more opium to China. A war looks inevitable, threatening to jeopardize many things. Its a midst this chaos and uncertainty that the novel sets itself slowly in the Thirteen Hongs, the Merchant Township outside Canton, like the heavy smoke of opium.

River of Smoke goes away from Sea of Poppies and charters new territories. Barring Neel and Paulette, other characters of the first novel remain hidden in dark and new protagonists emerge; most notably Bahram Modi, a Parsi seth from Bombay and the head of the Indian merchant community in the Thirteen Hongs. Behram Seth, as he is called, he virtually gets hold of story before the first 100 pages are over and carries the immense burden till the end, sometimes at the cost of other characters.

A problem of this novel is that like Sea of Poppies, though it too tries to narrate many stories at once, unlike its predecessor, the stories seem disjointed and sometimes even irrelevant. For example, while you wonder where did the actors from the past go, you have to go through lengthy letters from a young painter to Paulette making you thing whether this plot was even necessary at all. I hope Mr. Ghosh has spared thoughts of joining the loose threads in the Third part of this Trilogy.

What the novel lacks in dynamism, it makes up by its depth. The author has taken extraordinary pains to do the research on his subject and it is visible in his work. The story opens like a flower where layers upon layers of petals revel things unknown from some different world. So much so that even something as mundane as the seemingly traditional snack of Samosa and Chai has in itself, a history from the expanse of Central Asia to the daftars of the Achha Hong, the Indian enclave in Canton.

As you go through the pages, you start becoming a part of this queer community of the Thirteen Hongs. The underlying tension of the novel seeps into the reader and he too starts worrying as do the merchants. The level to which the author is successful in creating a bond between the reader and the story is superb. Such is the details of the narrative that I would have been able to find my way through the alleys of this merchant town had a time machine transported me there. Much later after you have finished the novel, bits and pieces of this novel keep lingering in your mind. Like opium, the effect of the River of Smoke takes time to wear off…