What do you get when Rudyard Kipling meets Sean Connery, Michael Caine and John Huston? The Man who would be King is an intelligent piece of Cinema which is unabashedly entertaining especially for those who seek some good old fashioned adventure. 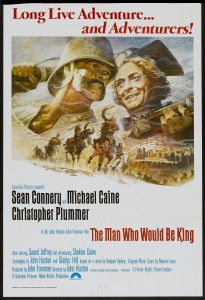 Based on a short story by the same name by Rudyard Kipling (Christopher Plummer), the film starts with Rudyard Kipling sitting in the office of his newspaper Northern Star during one evening when a ragged and most singular looking man approaches him.   This man turns out to be Peachy Carnehan (Michael Caine), an ex soldiers of the British Army in India who had turned up in the office of Kipling with his Comrade Danny Dravot (Sean Connery) a few years back. With Kipling as the witness, they had signed a contract pledging mutual loyalty and abstinence from alcohol and women until they achieved their ambitious aim to reach and rule a land called Kafiristan, undiscovered till then.

Peachy tells a fascinating tale of how he and Danny reached Kafiristan, making their way through dangerous Afghanistan, evading detection and dressed up as a Fakir and his servant, through the Hindukush and days of marching through snow, surviving avalanches and crossing mountains and canyons. Finally reach Kafiristan divided in warring tribes. They are received at a rundown town which is besieged by enemies on all sides. It is there that they meet Billy Fish, a Gurkha sepoy and the only survivor from an earlier expedition which came to this side. They become military advisers for the local chief and are successful in raising an army and marching towards the most hated enemy of their patrons.

What follows are strange twists of destiny. How they manage to conquer the enemies, how Danny is perceived as God; son of Alexander, the last European to set foot in Kafiristan, how they built and empire, got seduced by power and aspired to stand up to Her majesty Queen of England as and equal and finally, lost everything. Pursued by a frenzied mob, they see their soldiers falling one by one. At the end, Danny is killed, Peachy is crucified and then taken down and banished. And here is he back to Kipling with Danny’s head in a bag, still wearing the crown of Kafiristan.

The Man who would be King is the ideal fairy tale of an adventurer. The canvas, although not huge, is sufficiently large enough to accommodate with ease, the British Raj, Masonic Order and unknown lands of Central Asia. Shot mostly in Morocco, the film enchants you with some breathtaking visuals. Kipling, although politically incorrect at times (Billy Fish: They are asking if you are Gods. Peachy: No.Tell them we are Englishmen, the next best thing.), never fails to amaze you with the interest he manages to generate in you with his story.  John Huston has stuck to the story for most parts and seems to have done complete justice to Kipling. He tells a story in complete honesty, without frills and fancies, with some satire (“so that we can slaughter you like civilized people”) and that’s just it. The acting, as one can expect from two Knighted actors, is top class. For all their coarseness, lies and arrogance the Protagonists remain adorable rascals who have the audacity to laugh in the face of certain death.

Here I would like to make a special mention of Saeed Jaafrey who shines in his role as the ever loyal Gurkha. There is a scene where the last three of them are being chased and there are slim chances of escape. Danny asks Billy Fish to mount a horse and escape. To this Billy Fish  smiles and replies, “Gurkha foot soldier, not cavalry! Rifleman Majendra Bahadur Gurung wishing you many good lucks! ” .. draws his Khukri and makes one final charge on the mob crying his battle cry, “Aayo Gurkhali !!”. This scene somehow lingers in the mind even after the credits have rolled off.

The Man Who Would Be King can be considered one of the greatest adventure movies; rousing and exhilarating at the same time. It brings a sense of nostalgia in you for the bygone times when men were men, larger than life and certainly not cunning wimps. They do not make films like this anymore…