BerT and I took a cab to reach the Cambodia- Thailand border. At around 9:00 AM we crossed the border from the Poipet town of Cambodia and entered into Thailand. This was the first time when I crossed an international border on foot. 🙂 After the immigration check, we set out to find our way in Thailand. Hired a Tuk Tuk driven by a girl (I had read about her in Lonely Planet before) which took us to the nearest bus stand. From this bus stand, we got a minibus to Bangkok Suvarnabhumi Airport bus terminus. 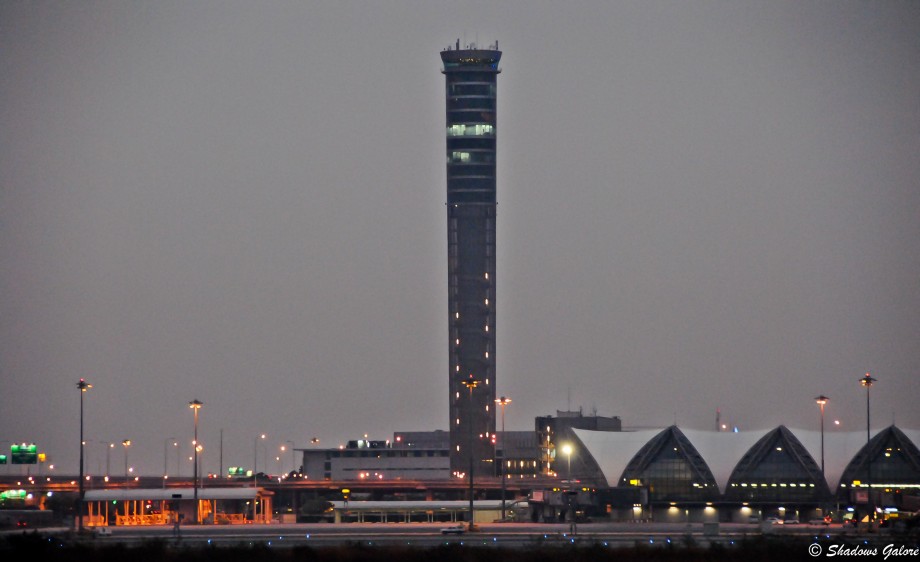 An aeroplane taking off

By the time I reached Bangkok, I had caught severe cold and was feeling feverish. Somehow reached my hostel and waited for the other two to come as BerT left for Pattaya. It was a beautiful hostel located on the bank of a river. On the other side was the Suvarnabhumi Airport and all evening I was watching planes taking off and landing.

We landed at Suvarnabhoomi airport after a short flight from Siam Reap. It is advised to fill all visa forms in flight, if a visa on arrival is planned. Also its better to buy some Baht beforehand.

There are public transport facilities from the airport into the city, the Metro train being the fastest. During peak hours expect traffic congestion and delays. Puru had booked rooms at the YHA Airport which is a cozy youth hostel near the airport. We took a bus and it took us quite some time to reach our destination. Puru was waiting at the room, appearing unscathed from the ‘scam route’ journey. 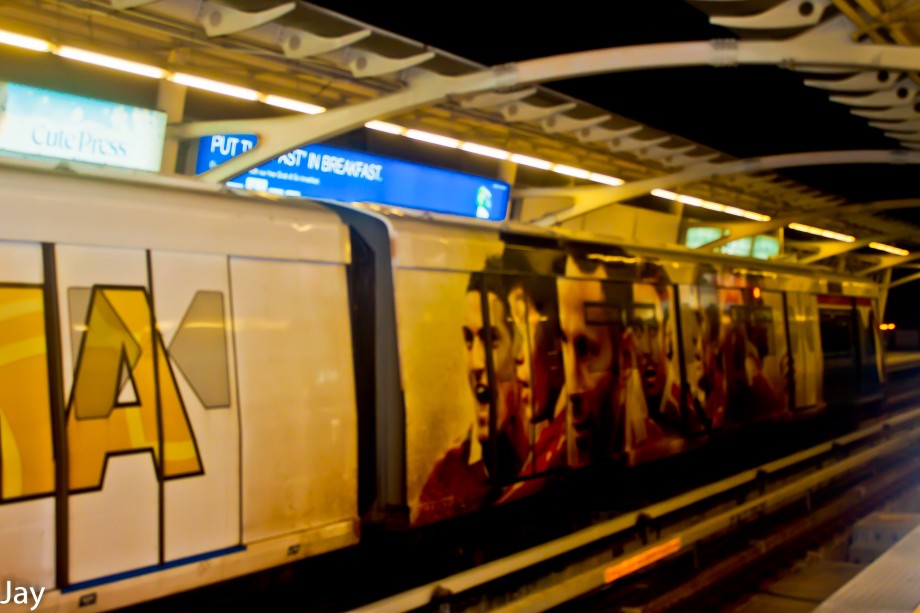 We then hailed a taxi to the nearest Metro and traveled into the city via train. We changed trains at Paya Thai and alighted at Nana MRT. Though Bangkok is well connected by different metro rail lines, seperate tickets had to be purchased for each line. After a bout of street shopping, we gorged on the roadside ‘Satay-like’ food and corn .The corn was utterly delicious and is recommended. Bangkok, post the floods seemed a tad expensive.Not quite the ‘bargain paradise’ I was promised. 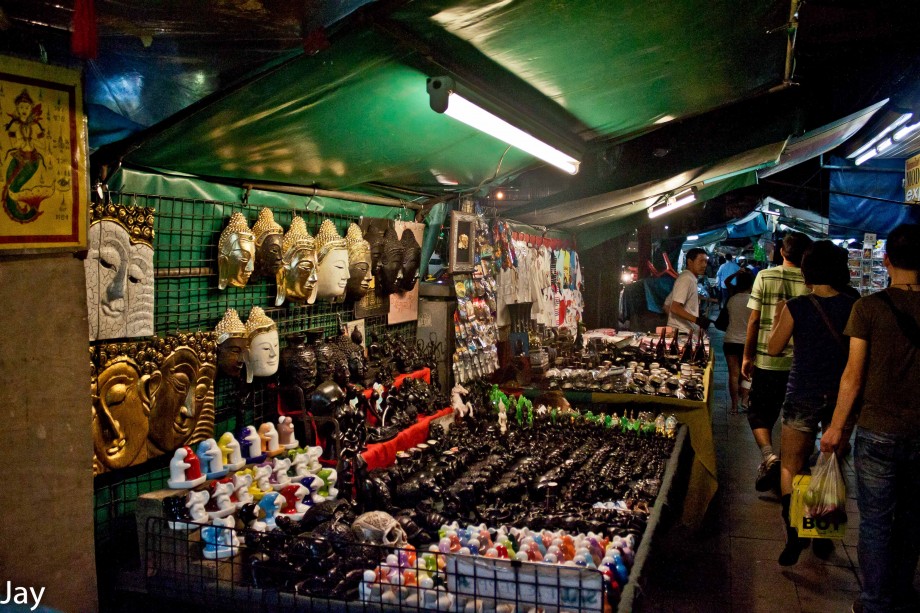 Street Side Markets near Nana Square

The Thais are very helpful people and we were aided correctly, be it at the train station,in the bus or by the taxi drivers. It is advised to pay exact change to taxi drivers as each of the taxi drivers we hired, automatically assumed that the change was a tip. The following day after Puru and BerT left for India, I had yet another spare day .

The following morning, Puru and BerT rushed to board their flight .My flight was late in evening so I still had some time to see some of Bangkok’s “attractions”. We had just enough time to visit Wat Arun and a ride on the Bangkok river and a few places in between.

First we went to the Royal pavilion and the adjoining Wat Ratchanatdaram .This royal temple has quite an interesting architecture and is not much crowded. Here, we were approached by a local who said he was a teacher and suggested we see the ‘Big Buddha’ and the ‘Black/Lucky Buddha’ and offered to help us.We politely declined and left the place. 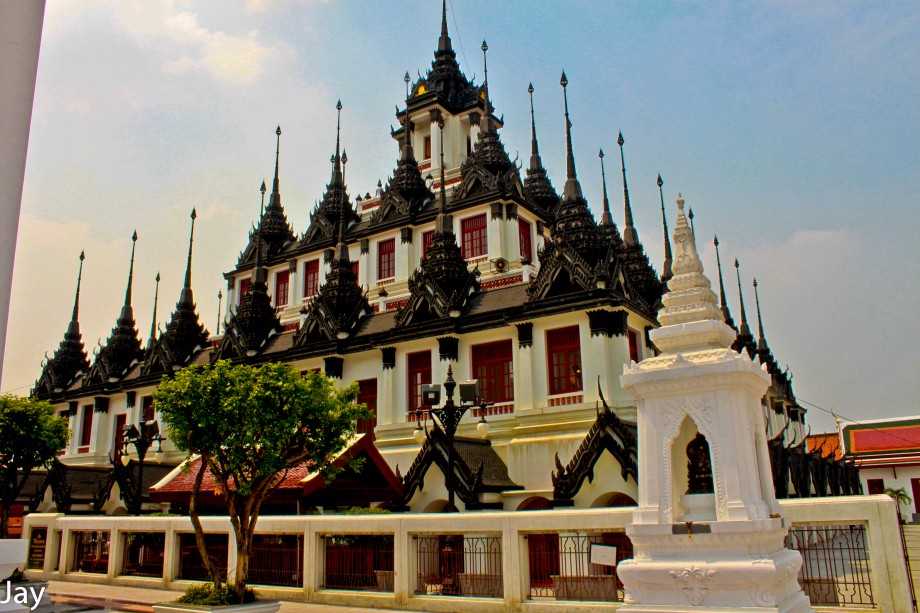 Since the Democracy Monument was nearby, we decided to walk to it. This moument occupies a traffic circle and hence cannot be seen up close. Here again, a man claiming to be a teacher advised that Big Buddha is open for visit and since it was a National Holiday that day, a tourism agency had tuk-tuks deployed to ferry tourists to the place. The man spoke good English and made several annotations on our map before a tuk-tuk pulled up and he said this would take us to ‘Black/Lucky Buddha’, a Expo nearby and then to ‘Big Buddha’.

Since this was the second time a ‘teacher’ was advising, I turned to my companion (who incidently was supposed to check on Bangkok for the trip), he nodded and we were off in the tuk-tuk. The tuk-tuk driver was quite a character and drove like a man possessed. It was scary sort of fun and I could recall the chase from the movie ‘Ong Bak’.

Things took a different turn as the tuk-tuk left the main roads to move in to by-alleys (short cut , I was told). I was getting apprehensive and started regretting the decision of listening to the ‘teacher’ and oh yeah my companion. Being a chronic paranoid, I feared the worst was to come but alas! the reins of the tuk-tuk were not in my hands. So I kept chanting silently, “Aal is well.Aal is well”. 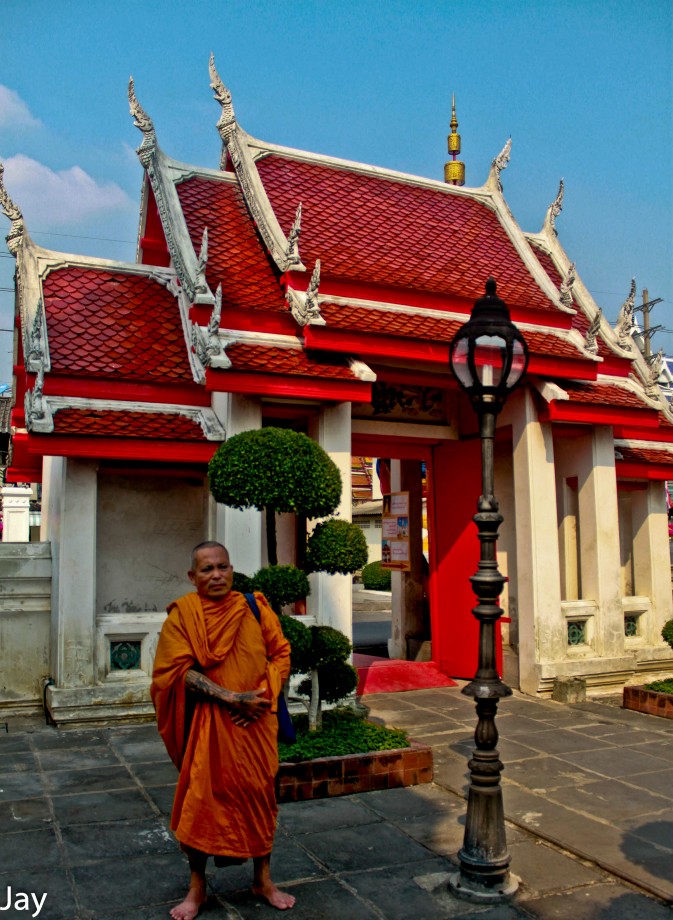 Thankfully, I had track of our location relative to the nearest main road and we walked back and tried to hail a taxi, without luck. We some how managed to hire a taxi and asked to take us Wat Arun.Even though i had mentioned the Thai name for the location, the driver managed to take us eleswhere.Though it was clear we were being scammed, I was thankful that the situation was not as bad as I had imagined sometime back. I John Dorianed for a minute there. Back to reality, the tuk-tuk guy told us to hurry as the expo would close soon. I saw this a chance to escape the scam and politely pointed to the map and told him due to less time on hand, I have to skip the Expo and go the ‘Big Buddha’ directly. He was livid and asked us to get off the tuk-tuk and drove off. I would later, learn about this method to lure tourists to the sale. So when in Bangkok, be wary of “teachers” trying to get you an appointment with Buddha. 😛

What was this day coming to…

The place we came was Wat Pitchayayatikaram Worawihan.Though not as famous as Wat Arun, the place was serene and calm, a place for quiet contemplation. We spent some time here resting and hailed a taxi to Wat Arun from here. Again, though we asked for Wat arun explicitly, inexplicably the driver would not take us there and dropped us somewhere near the vicinity . 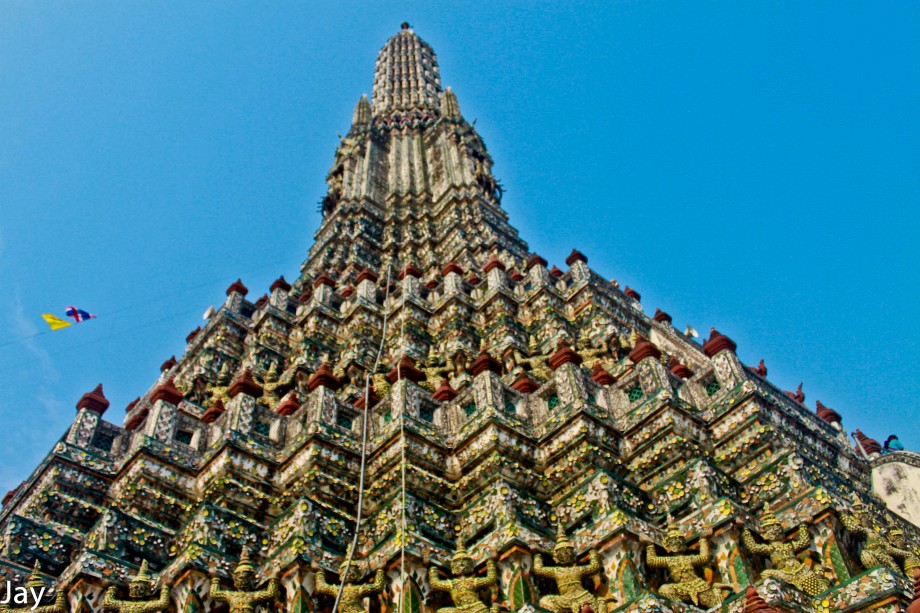 Wat Arun (finally!!!), the ‘Temple of the Dawn’. Built in Stupa-Pagoda style, the main structure is circled by four sub structures. All the structures are decorated by rows of demons and monkeys and contains figurines which can be related to ancient Hindu and Chinese cosmology. Over all its one of the well known and beautiful structures that adorn Bangkok . 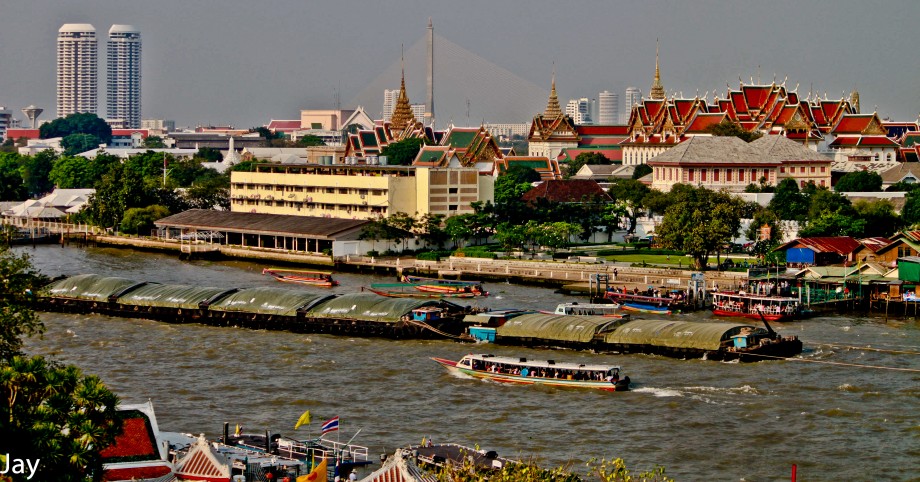 Bangkok across the river

Since we had not taken taken the fabled Bangkok river cruise,we decided to cross the river in a boat.The crossing lasted for 2 minutes and cost just 3 Baht. The experience left us wanting for more, and I etched a note to self: River cruise for the next visit.

Getting a taxi to Paya Thai was a nightmare, and citing traffic jams and stuff , taxi drivers demaded a flat fare of 300 Baht instead of metered fare. We let go a few before realizing this would be the norm.Finally one guy agreed for 175 Baht and we were off. Here too, the guy pocketed the 200 Baht given and thanked me.This time, I politely asked for the change and was given.

The sun was setting when we took the train to the airport.Despite the exciting day the fact remained, that there was a lot left in Bangkok to explore. But that would have to wait for another time…