In The Nubra Valley

The vast barrenness of the landscape seemed to extend until the horizon, yet it was not endless. A wall of high mountains rose above the far end of the valley, dwarfing it with their presence. Behind the snow-clad mountains were even higher peaks, black in complexion and foreboding in appearance. Those, as Dorje saheb informed, were probably the Karakorams – some of the most formidable mountains of the world. The Karakoram is in Pakistan and it is unlikely that we will ever be able to see those up close, so this was the best view that we could get. We had descended almost 7000 ft from the Khardung La, crossed Khardung and were driving towards Khalsar, the first dot on the map to the Nubra Valley.

The Web of Choices

“To follow the Silk Road is to follow a ghost. It flows through the heart of Asia, but it has officially vanished leaving behind the pattern of its restlessness: counterfeit boarders, unmapped peoples. The road forks and wanders wherever you are. It is not a single way, but many: a web of choices.” 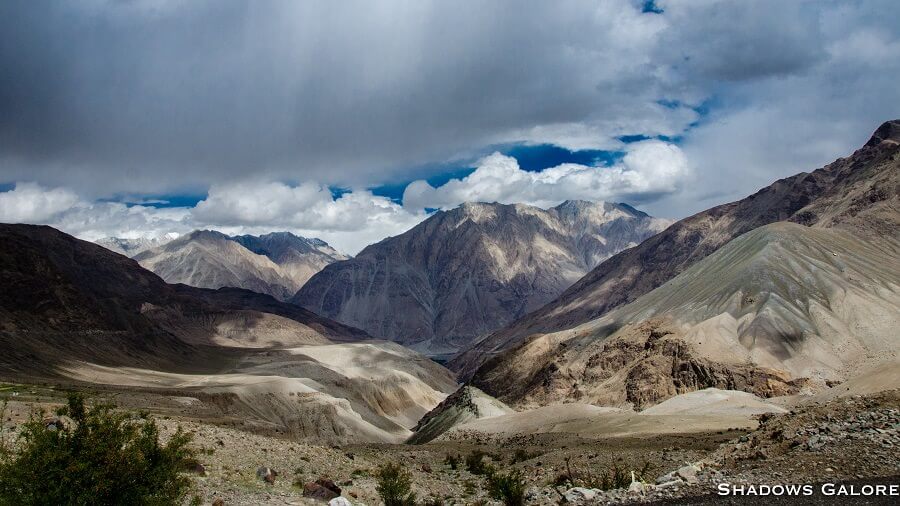 For centuries numerous trade caravans carrying wool, textile, opium, spices, precious stones and animal skins negotiated routes across mighty mountains and treacherous passes between China and Central Asia. The Nubra valley was bang on a major trade route and prospered from all the commerce that happened through it.

The caravans dwindled as trade slowed in the modern era and finally came to a halt after the realignment of political boundaries in 1948 and 1950. The decades that followed were marked by a slow decline and the militarization and conflicts added to the isolation. It was only recently that tourists started getting permits to visit this area.

This region is not a war zone today. Even though the ancient trade routes now do not carry camel caravans, the motorways that replaced those ferry tourists and military personnel all the time. Tourism is especially thriving, bringing new prosperity to the local people, and the challenges that usually follow development.

Have you ever seen a river so turquoise that it looks like molten emerald flowing by?

The Shyok rises just below the Karakoram Pass and flows westward meeting some of the smaller rivers of the eastern Karakoram that add volume to its water, changing both its character and temperament. The granite mass of the Pangong range force it to make an acute turn and take a north-westerly course where it meets its main tributary, the Nubra river. Emerging from the Siachin glacier, the Nubra river meets its parent on a wide sandy flatland that is simply known as the Nubra valley. The two rivers then continue their journey and enter Baltistan to finally merge with the mighty Indus. The synergy of these rivers has a profound impact on the ecosystem and life in this region, the latter having conveniently moulded themselves along their course.

After another hour of driving through the mountain roads, we were racing on a road that went straight through a sandy flat, with neither turns nor gradient. We were in the Nubra valley and Diskit was nearby. 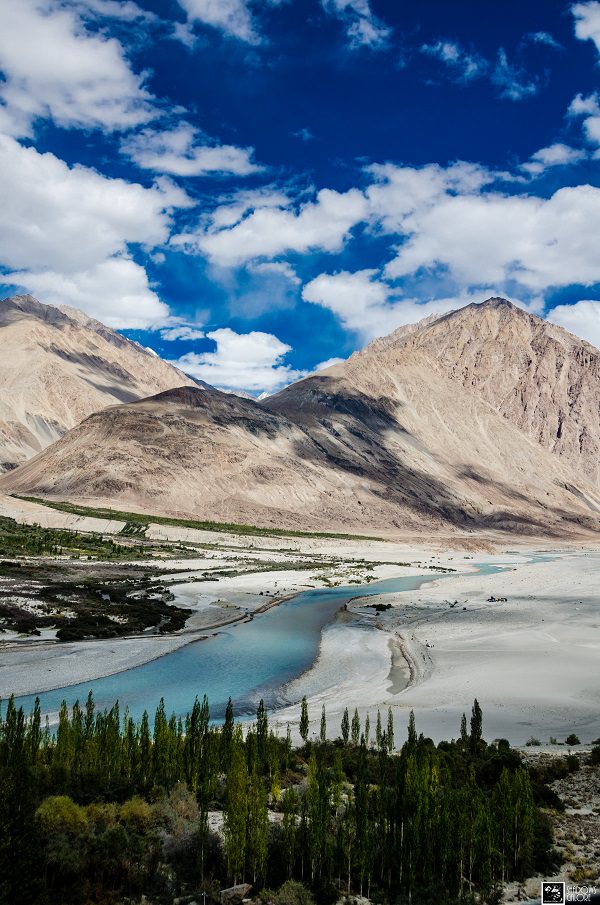 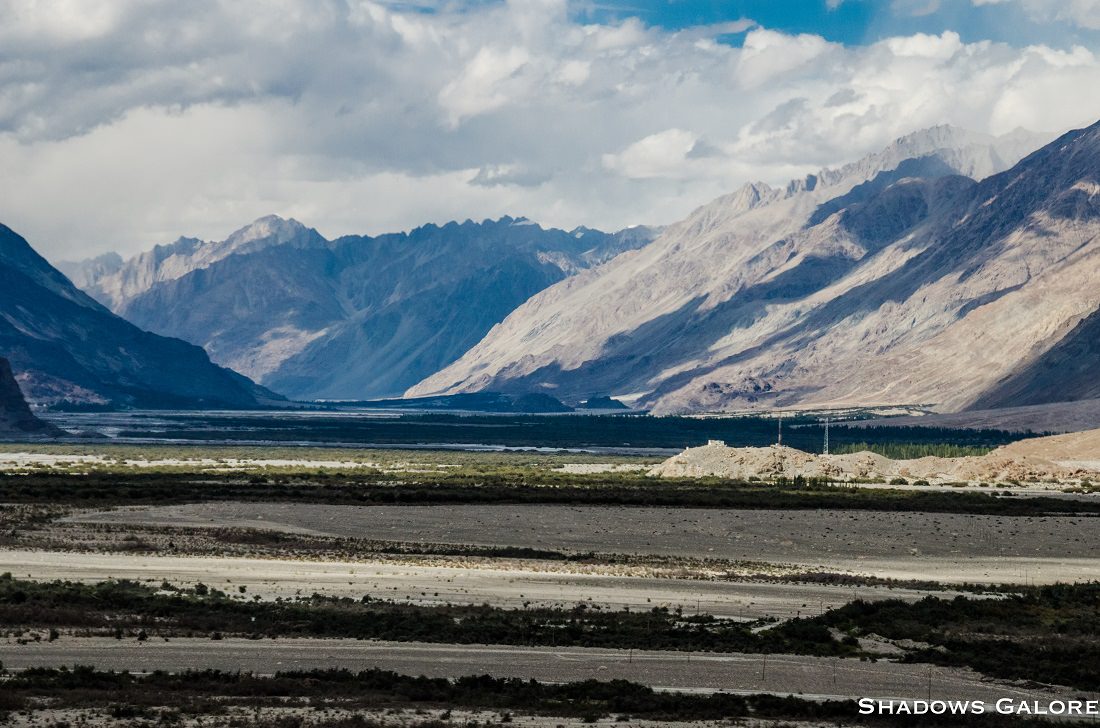 Top: The flatlands of the Nubra Valley | Top Right: The Shyok River

At this moment, I will pause to introduce you to our Nubra Valley video and to shamelessly promote our YouTube Channel. We realized the power of moving pictures rather late in the game and have only recently started making short videos of our trips. Learning is in progress and if you visit our YouTube Channel and subscribe to it, we will feel highly motivated.

The Reflections At Diskit

Just a stone’s throw away from Diskit is a place that most motorists tend to overlook on their way. A tiny bridge stands in a very quiet place with a small mountain stream passing under it, making the only sound around apart from an occasional vehicle. The water from the stream collects into a pond of sorts. What makes this spot truly remarkable is not the bridge or the pond, but the reflection of the mighty mountains in the front and the clouds above, giving the word ‘spectacular’ a whole new meaning. We spent more than an hour there, soaking into the bounties that Mother Nature was bestowing upon us. The time spent there was worth every second.

Do stop when you reach there during your trip. You will know when it has come.

The Monastery At Diskit

It is impossible to miss the Diskit Monastery as you approach the area. Perched upon a high mountain cliff like a Falcon’s nest, the old gompa watches over the Nubra valley as a guardian deity.

The monastery is one of the oldest in this area, dating back to the 14th CE when the local ruler, who went by the name Nyig-ma-grags-pa, encouraged the Gelugpa (Yellow Hat) sect to establish a monastery in Diskit. Over the centuries, it has watched trade caravans and armies marching by and witnessed political turmoil and pitched battles. 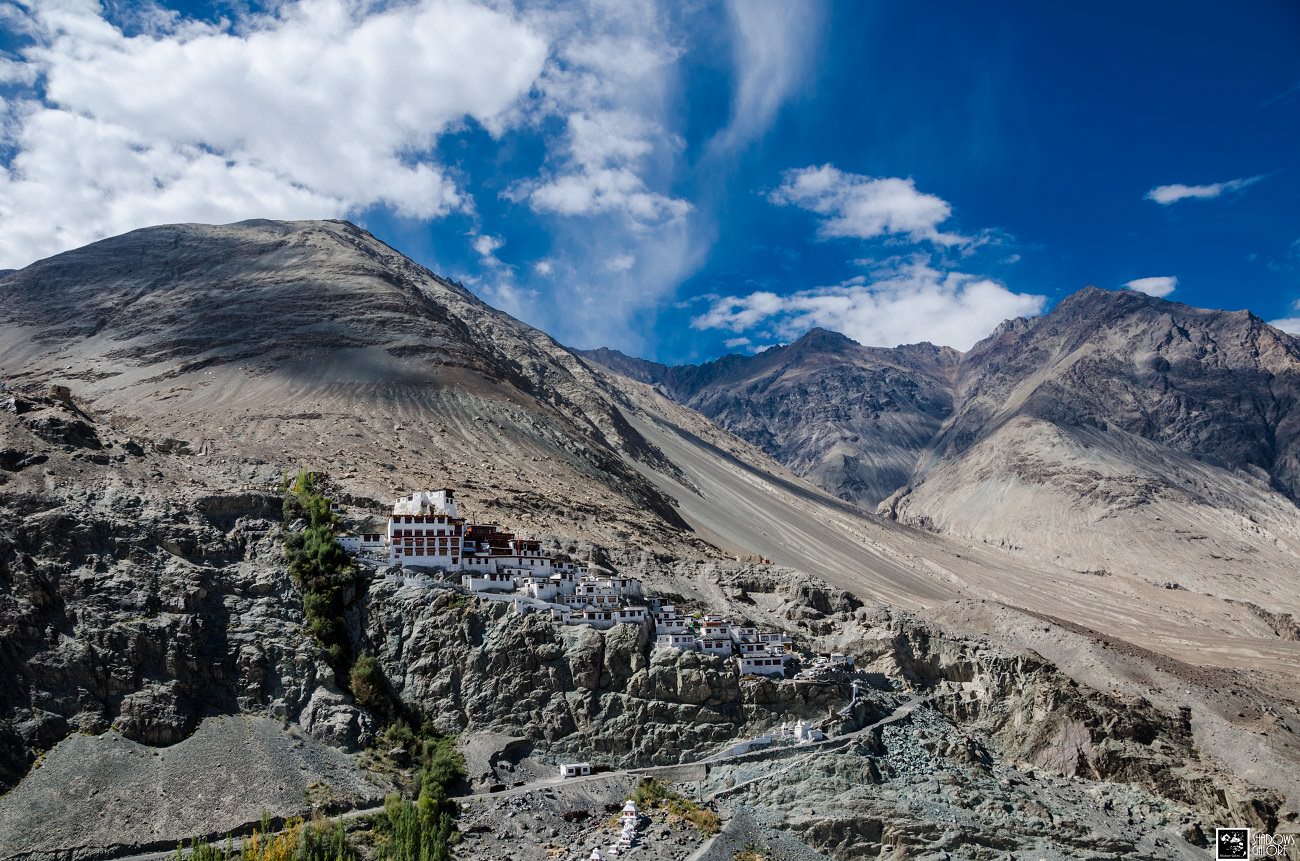 The Diskit Monastery, as seen from the Maitreya Buddha Statue.

Today, the Diskit monastery finds itself in quainter neighbourhood. There have been regular restorations and new additions to its building and the place has a vibrant look about it. A 106 ft tall statue of Maitreya Buddha was erected on the hill below the monastery in 2006 by HH Dalai Lama. The Buddha sits in a lotus position, looking towards the Shyok valley and to the high peaks at a distance. The view of the valley from this platform is glorious. Vehicles come till just below the status and even if you are not strong enough to walk all the way to the monastery, it is highly recommended that you visit at least the statue. 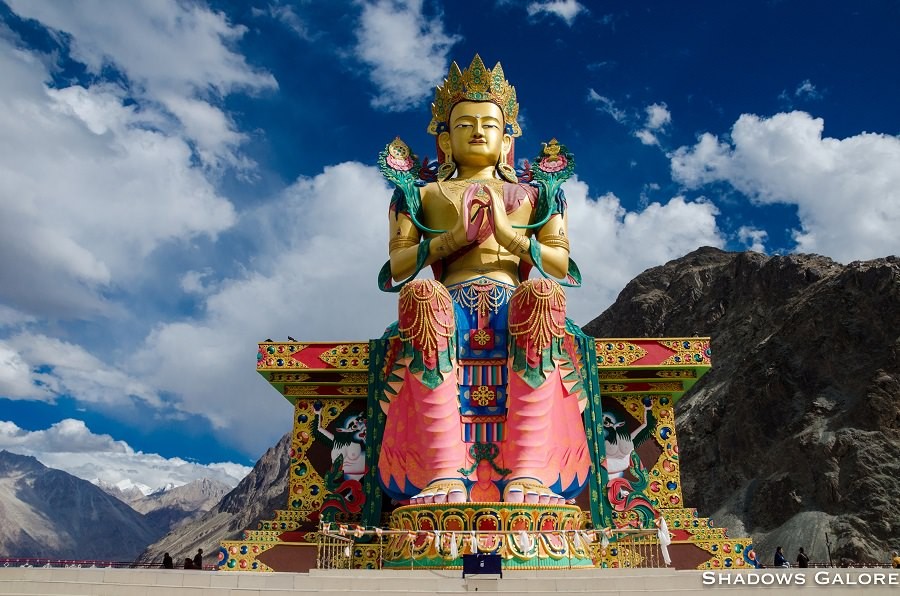 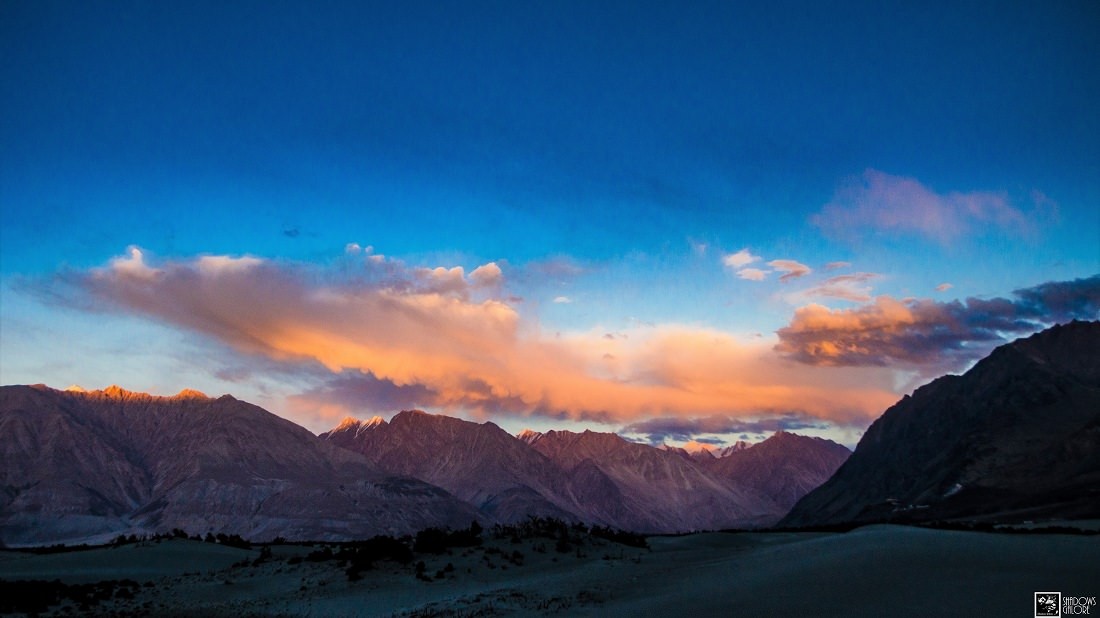 The Sand Dunes of Hunder

Hunder is famous for its white sand dunes, dramatic landscapes and skies and the double-humped Bactrian camels that complete its desert odyssey. The sand dunes seem more like the remains of a prehistoric river bed and are spread for miles in a terrain that is surprisingly flat in comparison to the rest of Ladakh.

Hunder is perhaps the most touristy place in the Nubra Valley, filled with tourists and the usual attractions created to appeal to them. There seem to be more hotels than houses in the towns, with tourists outnumbering locals by 5 to 1.

The Bactrian Camels of Nubra 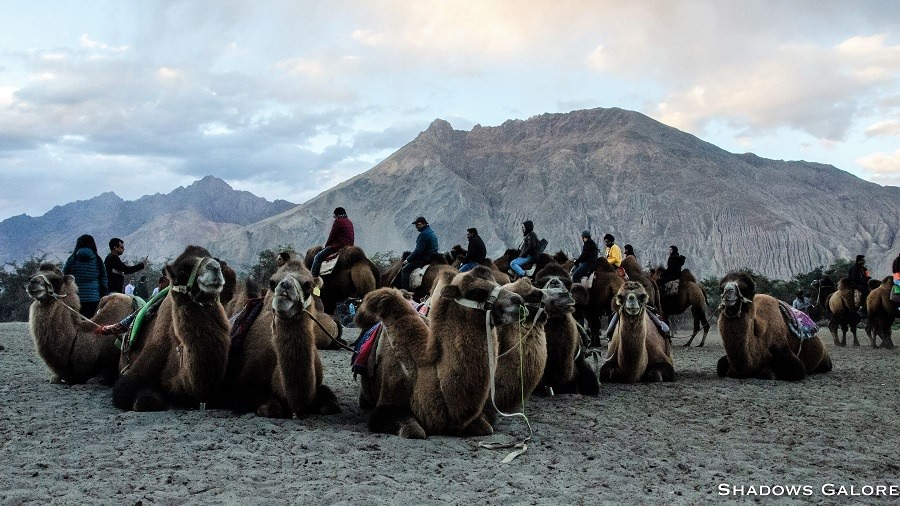 The Bactrian camels are large, even-toed, double-humped Central Asian cousins of the more common dromedary camels that are found in Rajasthan and Gujarat. They have been domesticated before 2500 BC and were remarkable in their tolerance of cold, drought and high altitudes, making them idle pack animals for the Silk route trade caravans.

Today, there are less than 150 Bactrian camels in India, most of those concentrated in the Nubra Valley. They primarily serve as a tourist attraction and are used for ferrying tourists during the short camel safaris. While the use of animals for entertainment is a debatable topic, one must also consider the economic aspects that are critical for their survival. 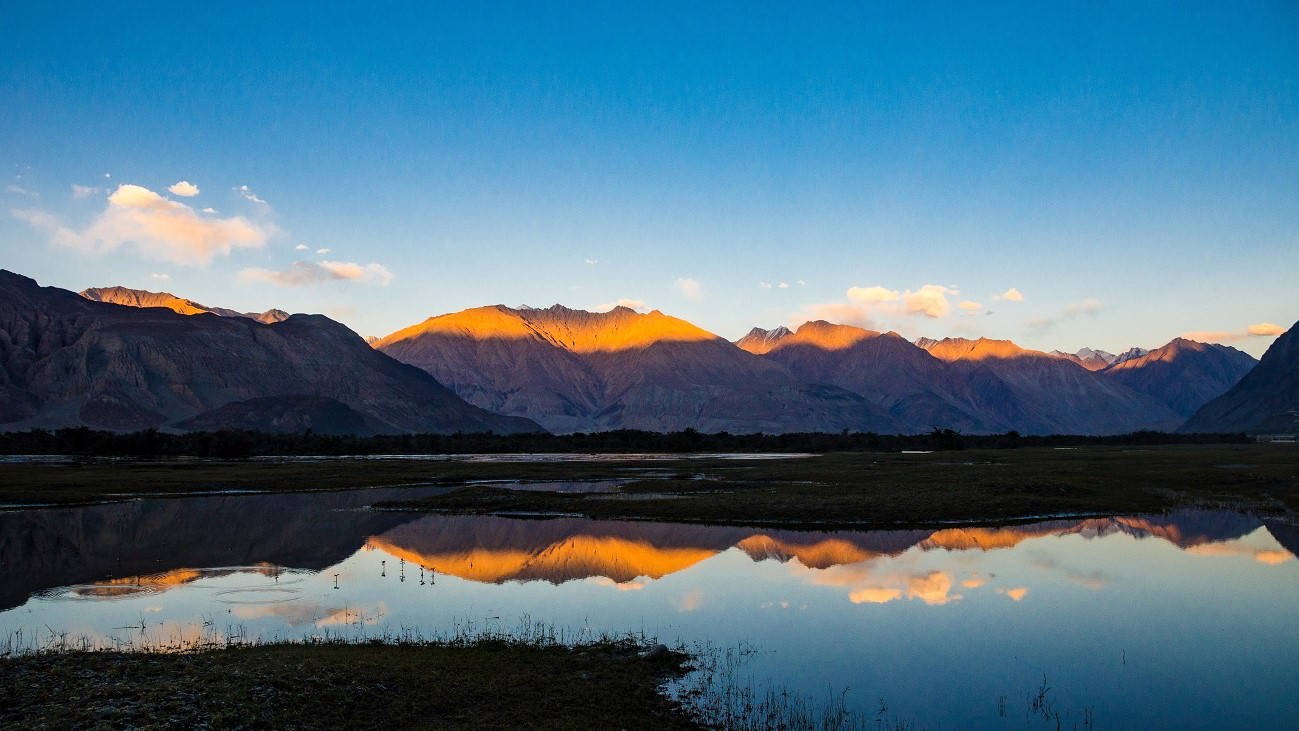 An Evening On The Sand Dunes

The Sun can be very harsh on the Sand Dunes in Nubra and the best course sometimes is to stay indoors during that time. We were at the dunes by 4:00 PM and the place was quite crowded with people jostling for camel rides. We decided to skip the rides and chose to walk on the dunes instead. Walking on sand can be tiring at times, but after the din of the crowds was gone and we were on our own, it was an enjoyable experience. 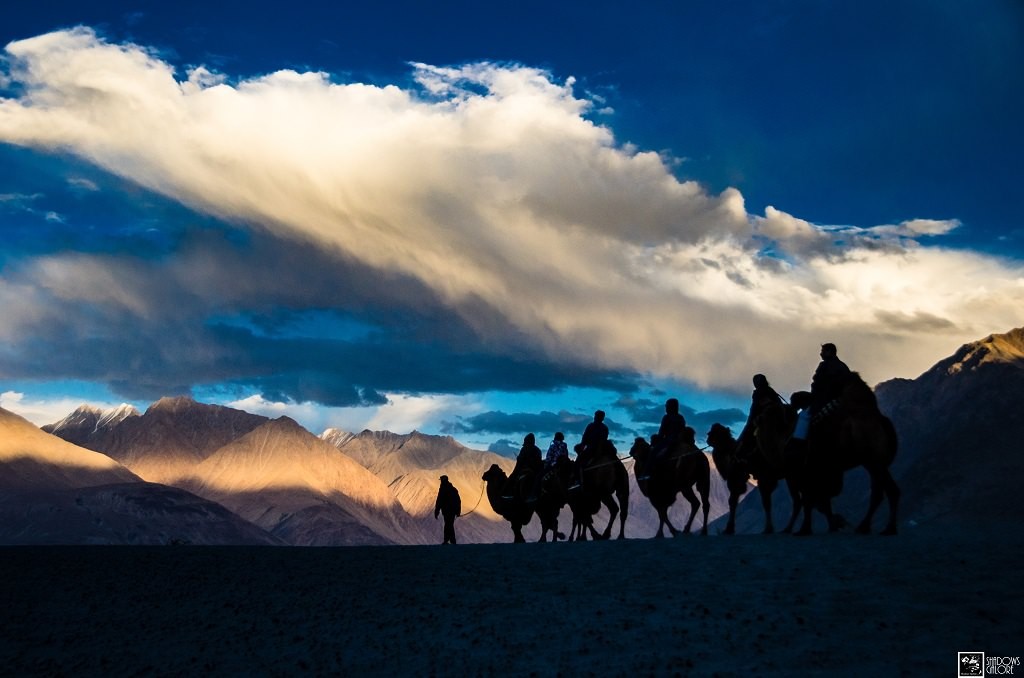 Even though the Nubra Valley and its camels have been much photographed, it still have a lot to offer to every photography enthusiast. When the sun starts going its journey towards the horizon, the mountain peaks lit up in vibrant shades of orange and the skies add to the drama with some help from the fluffy clouds. Add to this setup, sweeping dunes made of white sand and tiny caravans of camels carrying people, and a magnificent photograph is served to you. All you need to do is, take the right position, be a little creative, and click away to glory.

I love the silence of the desert. When nobody is around and there is no wind, you can experience almost absolute silence, a moment when you would not speak for the fear of breaking the magic. It has such a calming effect on the nerves, one feels rejuvenated and ready to face another day on the road. As it got darker, we just sat there soaking in the surroundings, feeling the timeless antiquity of the Nubra valley engulf us. 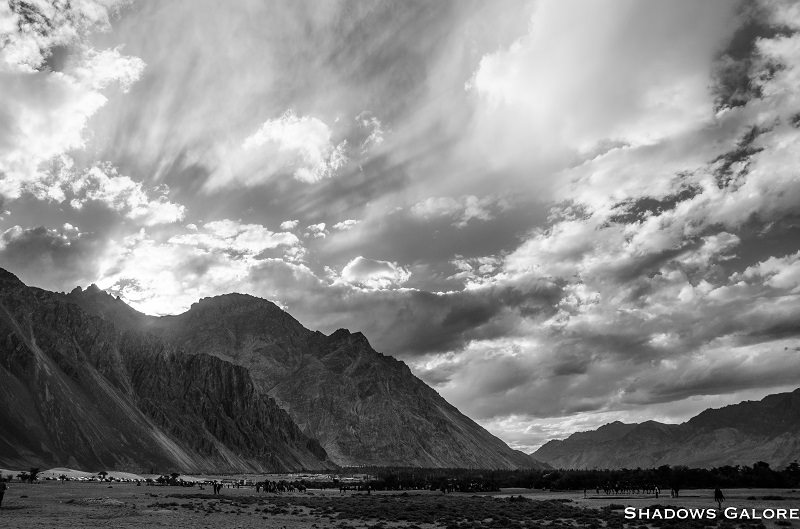 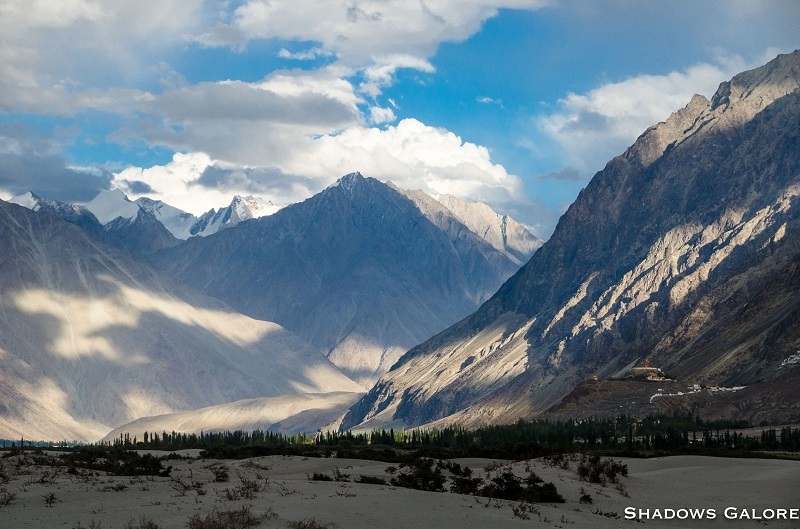 In total, I made two trips to Hunder, once with Ekta and the next time with a few friends on a curated trip organized by TGDL. The first time it was overcast causing some disappointment but we got lucky the second time and took photographs to the heart’s content. We could barely wait for the next exotic destination from here – Turtuk. 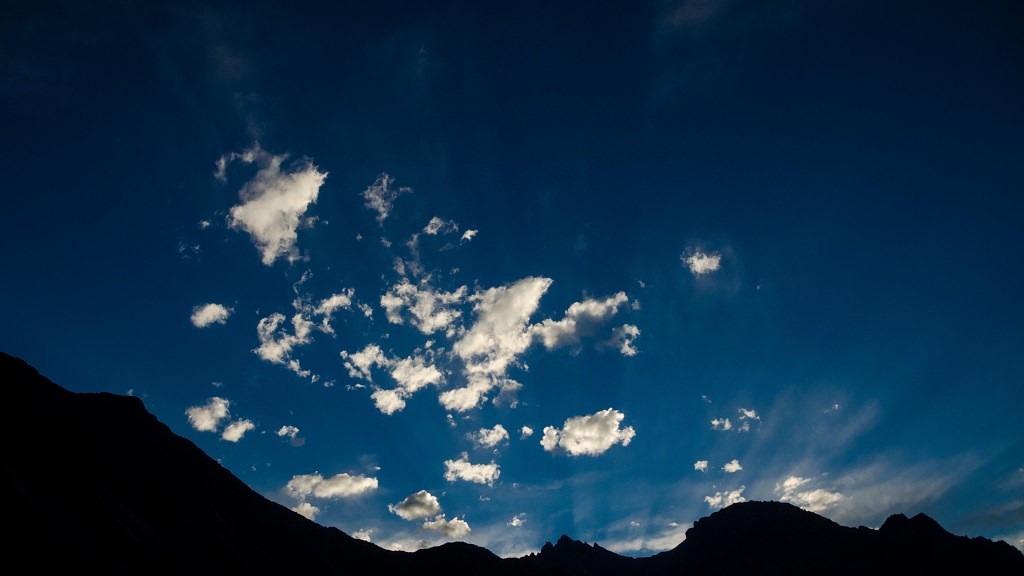 Did you like this experience of the Nubra Valley?

A part of this trip was facilitated by The Grand Dragon Ladakh. We are thankful for their care and hospitality. Read more about this beautiful institution here. 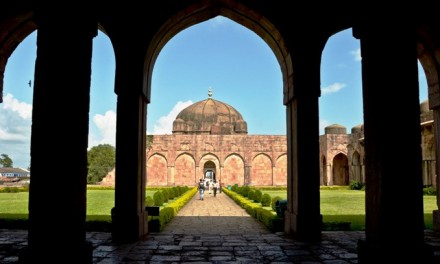 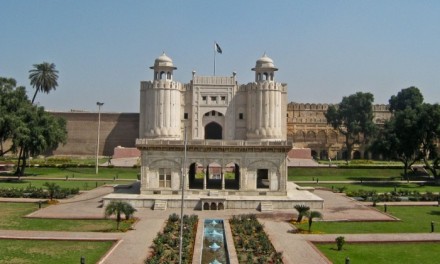 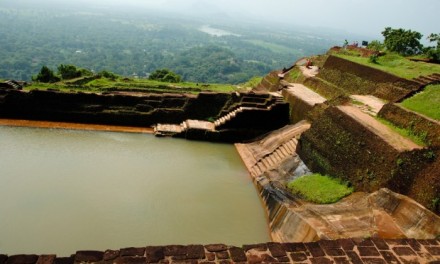 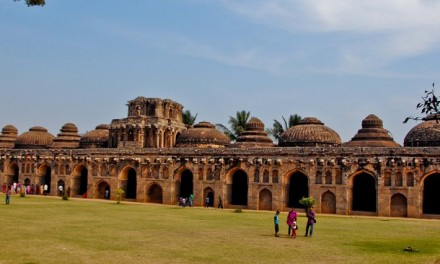