Who doesn’t find Ghosts fascinating? Well, if you were about to nod in affirmation, I think you are weird. No one, in their right senses, can think that they like ghosts and want to meet. However the opposite goes for ghost stories, for people dig them; children, because it makes their imagination run riot, and adults because these stories bring back to them, the idyllic afternoon story telling sessions with the grandmother in the summer vacations, with a taste of raw mangoes and plans of evening swim in the village pond… and I am not even started on the basic human thirst for adventure and mystery yet.

Whatever the reason might be, adding a haunted tag to a potential tourist destination can be the best PR exercise that can be done for the place. The same happened with a once unknown Bhangarh, with some stories flirting with the twilight zone and people started thronging it in a hope to catch a glimpse of its ghosts. 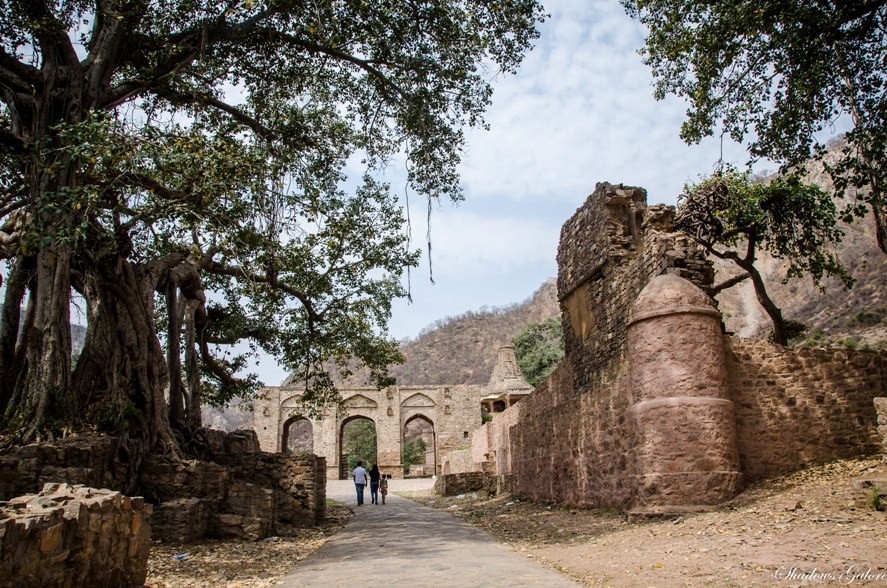 During our recent trip to Jaipur, the folks at Crowne Plaza must have found it weird that of all the places Rajasthan had to offer, it was Bhangarh that we wanted to go to. Well, we have actually covered Rajasthan in detail and somehow this relatively humble fort was still featuring in our to-visit list, because of the great PR it has received due to the urban legends surrounding it. So early next morning, we hopped into the car and started towards the fort which is about 100 KM from Jaipur.

Bhangarh was established as a fortified township in the 17th century by Madho Singh, the younger brother of Sawai Man Singh I. The fort did not remain inhabited for a long time and went into slow decline after the death of Chattar Singh, Madho Singh’s heir in 1630 AD. It was forcefully attached to the kingdom of Amber later on, straggled on for some more time and was finally abandoned after the famine of 1783 AD. 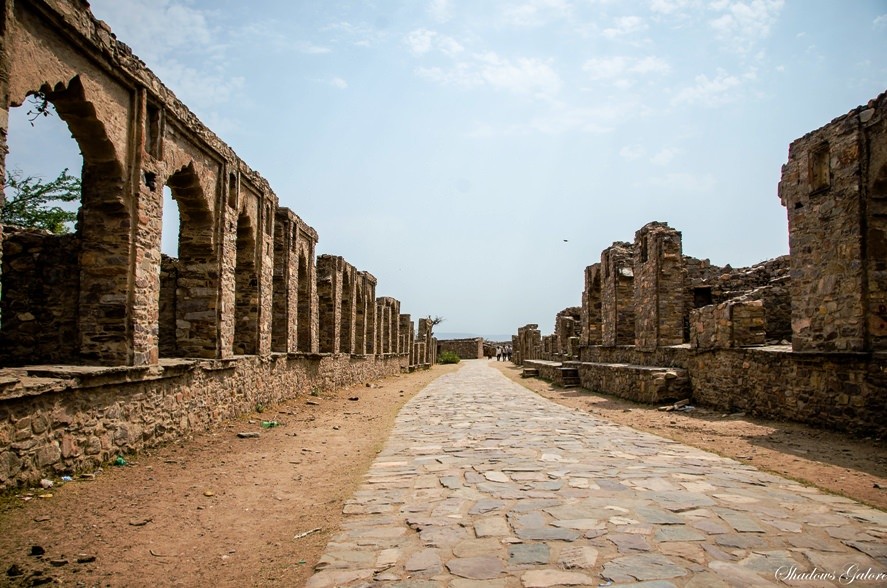 So, as it goes, most abandoned places gather cobwebs of stories about them in a way that the line between fact and myth is blurred. In this case, the most popular story is that of a princess and an evil wizard. Princess Ratnavati of Bhangarh was very pretty and attracted the evil of a Dark Wizard. One day he tried to lure her into drinking a love potion, but the clever girl was able to see through the rouse and threw the bowl on a big boulder. The boulder started rolling and crushed the wizard to death. Before he died, the evil man cursed that Bhangarh will be destroyed soon and no one will ever be able to live within its walls again. Soon there came a terrible calamity in which the town was completely destroyed including its people and the Princess. It is said that the spirits of the dead still haunt the place and do not allow anyone to settle there and to this date, no one dares stay in the fort after dark.

The locals claim to that inexplicable sounds, music and sometimes perfume come from the fort along with ghostly shadows and strange lights. Some claim to have felt the sensation of being followed by an invisible entity. However all of this remains within the hearsay and no conclusive evidence of a haunting have ever been found. 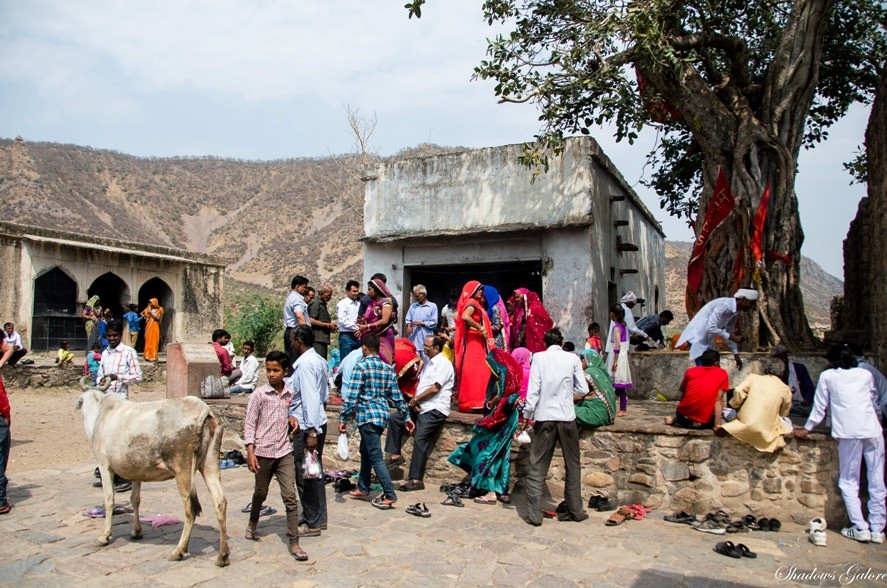 In India religion is everywhere. Of the many temples of Bhangarh, this Hanuman Temple was the first, and the most buzzing with activity ! 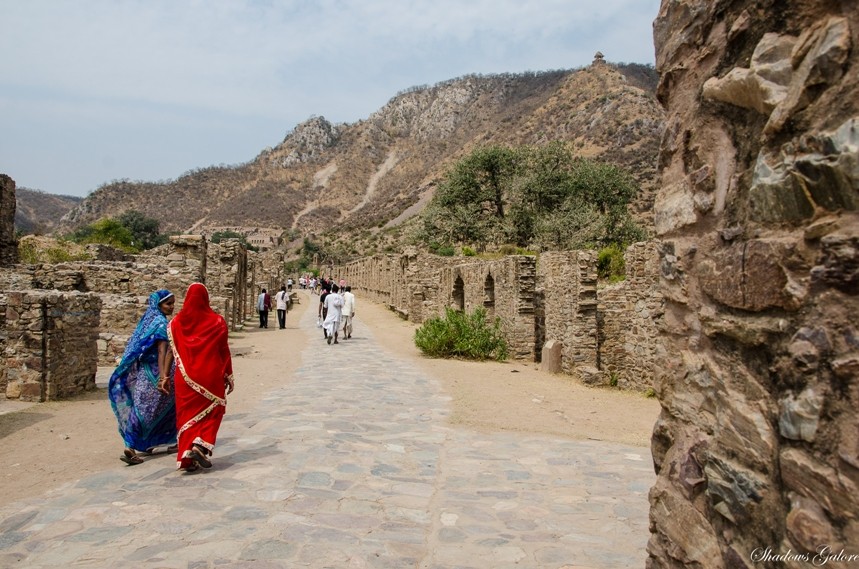 People waling through Jauhari Bazaar, a market lines with shops on both sides 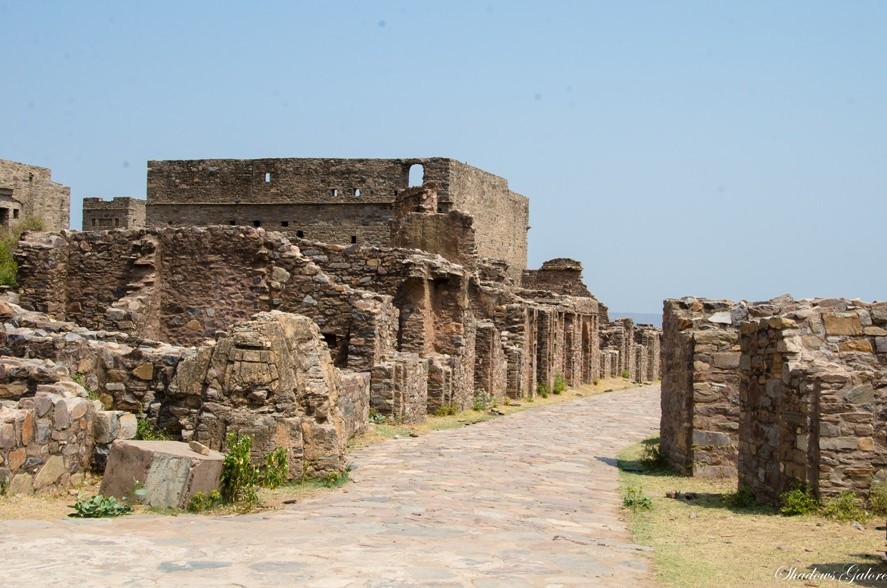 Ruins of homes in the sidestreets. They have not seen an inmate for centuries ..

Weather turned excellent as we approached Bhangarh, the morning was cool and there were some clouds in the sky. It had rained a couple of days back but right now everything was just about right. At the parking we said bye to the driver and entered the fort without much ado. Entry is free and there are no guides etc around. 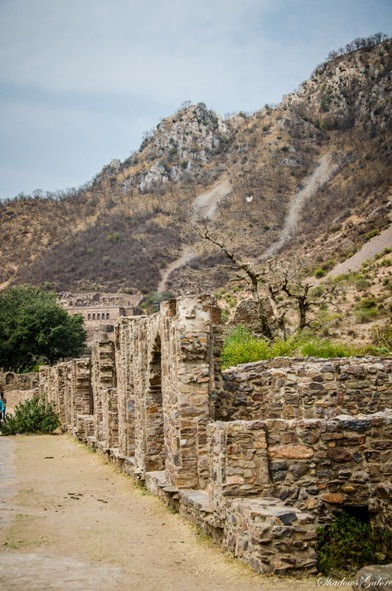 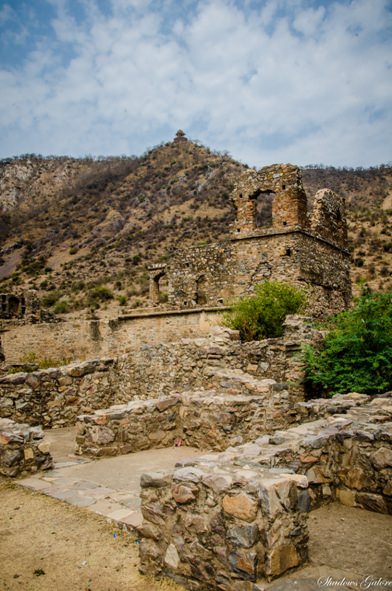 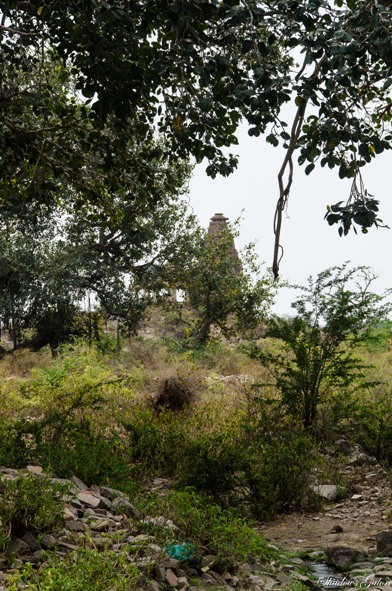 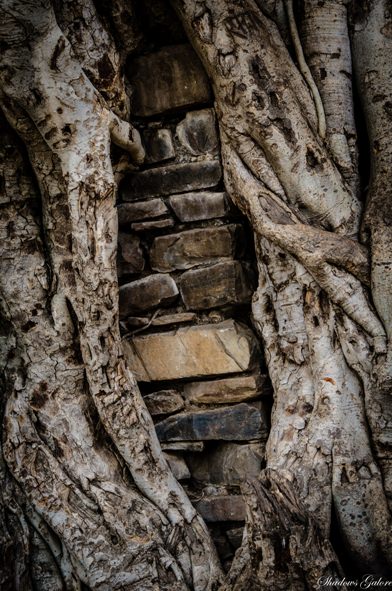 During day time, the creepy tales about this fort seem even more unbelievable, even if there a lot of natural outgrowth to create the settings. As one sets foot inside the main gate, there is a Hanuman temple to the right, a pretty mediocre one at that. Since it was a Saturday, the temple attracted a lot of devotees from nearby villages. One has to walk some distance from here before the ruins start showing up. There is a main path that goes through the Jauhari Bazzar, a row of semi identical shops neatly lined along the street, with the same precision in their construction as the markets of Jaipur. A Dancer’s Haveli lies on the right, an impressive two-storied building. Many other streets branch into the main street leading to hundreds of ruined houses. As there are many people on the main street, it is difficult to feel anything strange. However, if you venture out in one of those desolate streets, the ruins do seem a little eerie – more because of their sadness than anything supernatural.

Forests has reclaimed a large part of Bhangarh and roots of a huge Banyan tree have misappropriated high walls in Angkor style.  A temple with high piers could be seen at a distance but it was a little too far for walking so we marched on to another gate. It is from here that the fort complex actually starts.

The first building that we noticed as we entered was a beautiful temple to the right. Set on a high plinth, it goes with the name Gopinath Temple, and is shaped more like a cenotaph than a traditional temple. The outer and inner walls and pillars have the same intricacy of carving that Rajasthan is famous for. There was no idols, perhaps stolen or condemned to the decaying existence at the basement of some museum. There were some ruined buildings around but were not of much interest. 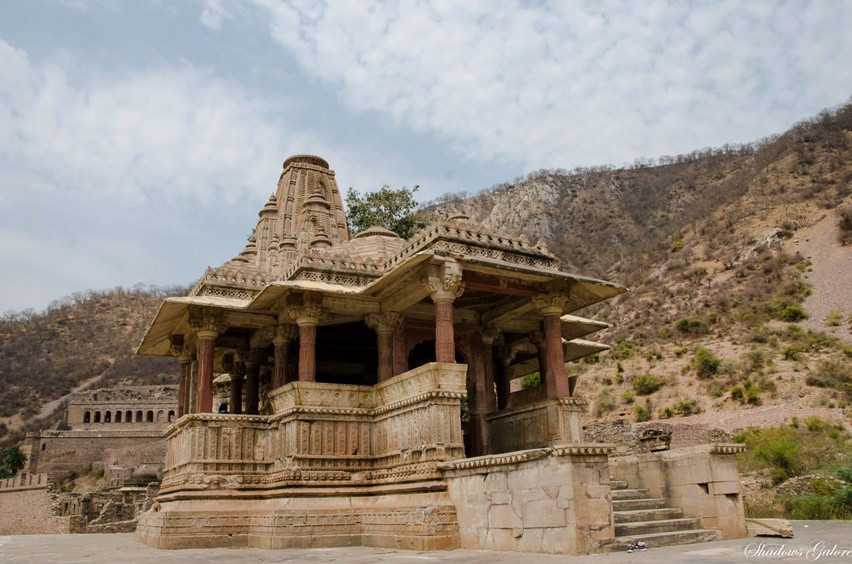 The area from the gate to the real fort has a well maintained lawn with some basic amenities. On the left is another temple, dedicated to Lord Shiva besides a pond which is said to be fed by a perennial stream. The pond was impressive but for the fact that there were just too many empty plastic bottles floating in it..

The Royal Palace, as we gathered from the ASI signboard, was once a mighty seven storied  complex, of which only four stood the ravages of time. Though not as majestic as the other palaces of Jaipur, it still strikes an impressive note. The lower levels have their ceiling intact and the bat infested long galleries and dark rooms seem to go on and on.

The decay is more clear as one climbs up, while the right part of the palace still some walls standing, the left site is in total ruins. The tumbling down sandstone walls with marble pillars do show that the palace would have seen some glory in its heydays.

>>> Nothing haunted about her, she was just sitting there at the pond in a bright saree .. 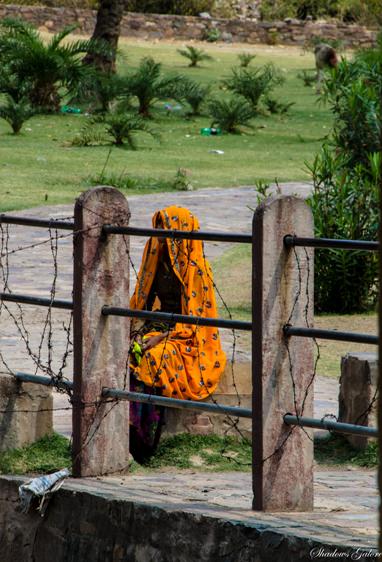 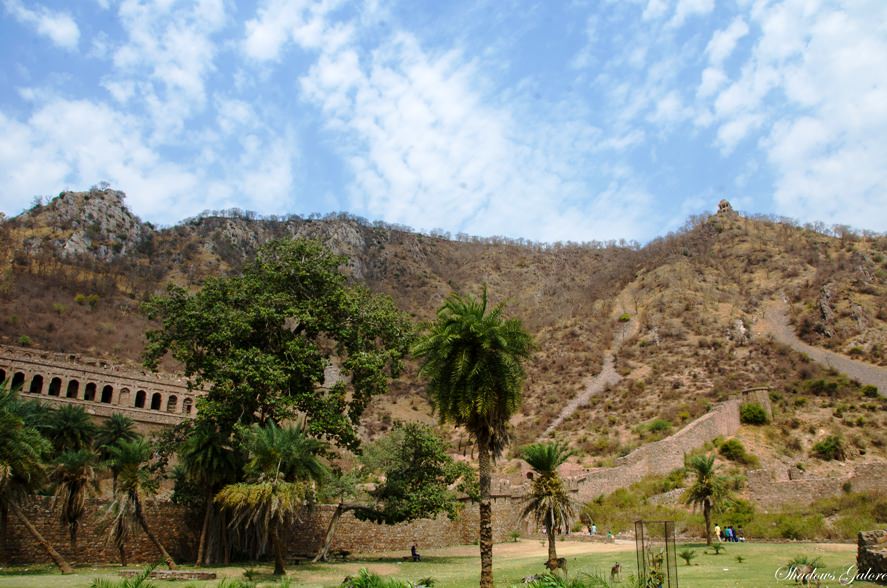 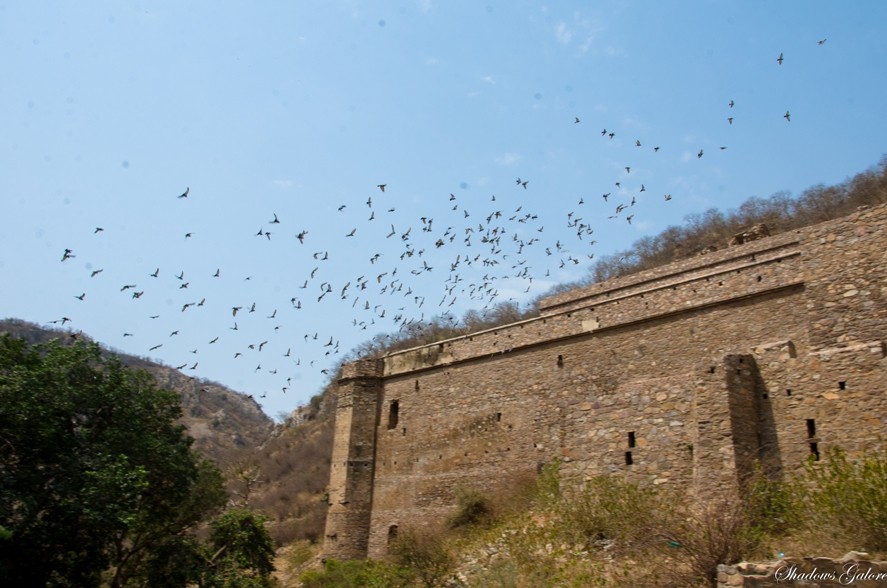 There was a big group of pigeons hovering around the ramparts 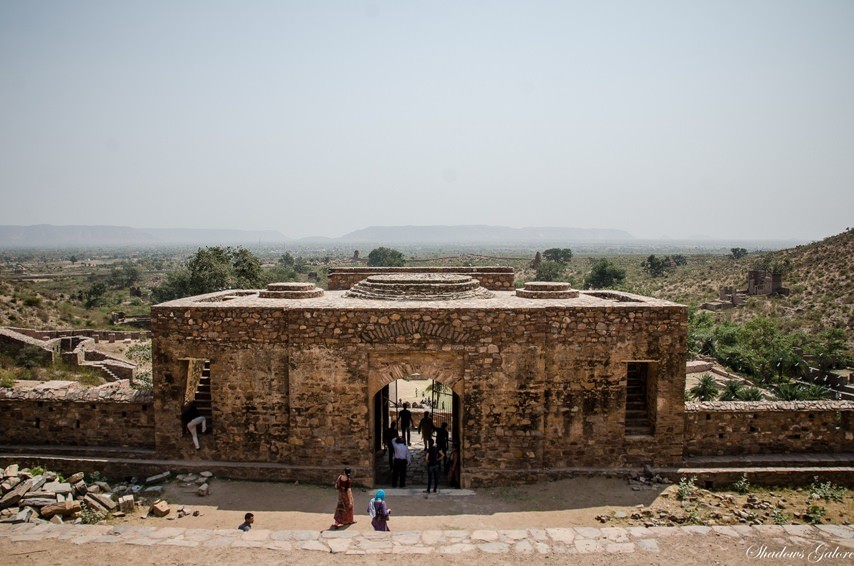 View from the First Level

We were more psyched up by the ruins in the side streets of Jauhari Bazaar than the main fort itself, so after coming down from the palace, we explored them some more, that is till we started getting an uncomfortable feeling. Attributing that to fatigue and hunger, we came back. 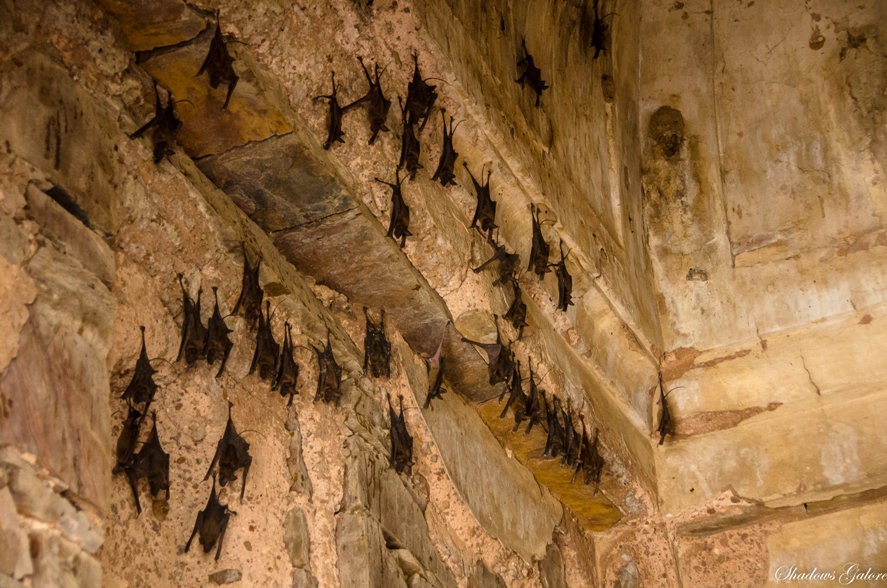 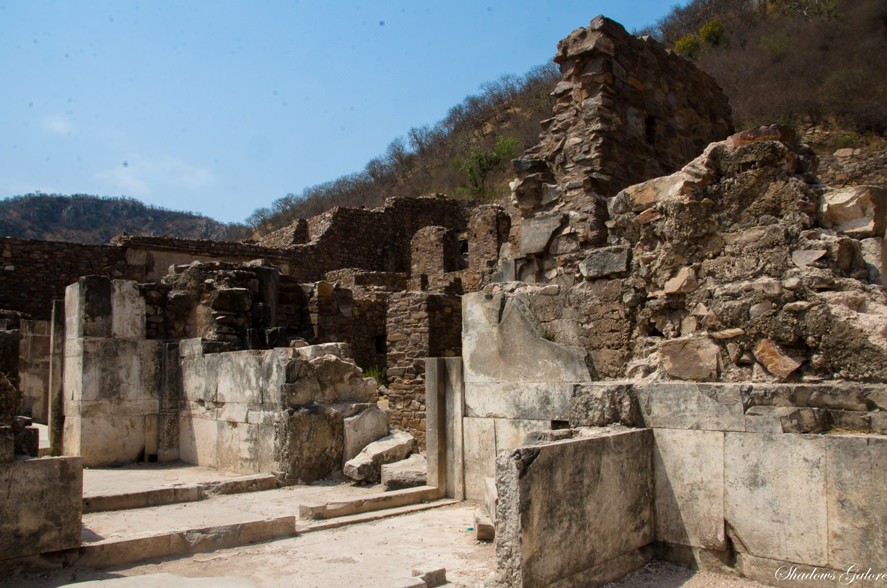 Ruins of the palace at the top level

Tantrik ki Chhatri (abode of the evil wizard). A jet flew past reminding us that it was 2016

So that’s all about our trip to Bhangarh. In case  you were wondering what was that Ghosts thingie in the heading about, it was just another ruse to bring you to this post. Now once you are here already, enjoy the photographs and go through other stories. Bhoot Voot Kuch Nahi Hota .. 🙂