After spending the morning at the historical sites in Amman, we  started towards north to visit Jerash – Gerasa of Antiquity. Also referred to as Antioch on the Golden River or Pompeii of the Middle East, this city of the antiquity dates back to the neolithic period and rose to prominence from the time of Alexander the Great.

Located on the mountains of Gilead,  Jerash is a reminder of the grandeur of Imperial Rome, more so being one of the largest and most well preserved sites in the world. It was 40-50 minute ride from Amman and Waleed shared the history on the way.

Jerash was a part of the federation Greek cities, Decapolis during the Hellenistic era. In 63 BC, it became part of the Roman province of Syria. After a gradual decline after the fall of the Roman Empire, Jerash again rose as a Christian city under the Byzantines. After years of wars andoccupation, Jerash was badly damaged due to several earthquakes and it was only in the 1920s that its restoration started.

Due to its rich history, Jerash makes a fascinating archaeological site. One can see structures from different eras that are strikingly different in their architecture.

As we reached Jerash, we first went to the small market besides the main complex. The sun was over our heads, so I decided to get myself a Jordanian keffiyeh, a traditional headgear made from red and white square scarf. Its amusing to see the shopkeepers tie the keffiyeh on the head with such ease because the method is quiet complicated. Men also get a black headband known as Aqel. 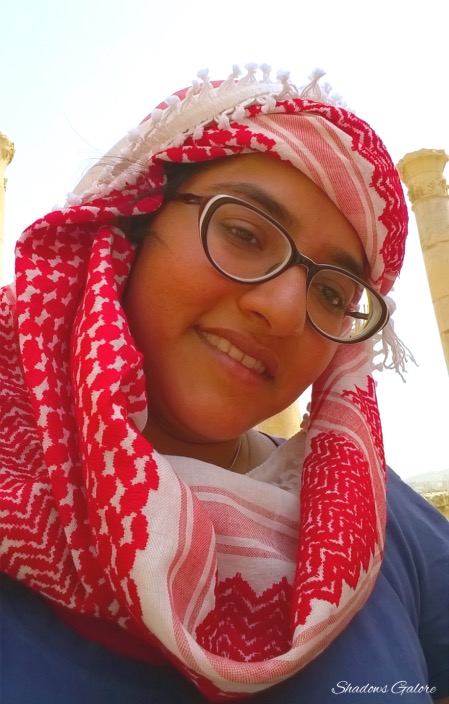 As one approaches the site, the first gate is the Hadrian’s arch. That is not the main entrance to the city. On the left is the Hippodrome, a massive arena where chariot races and sporting events were held. Even today, chariot races are organised as a tourist attraction. 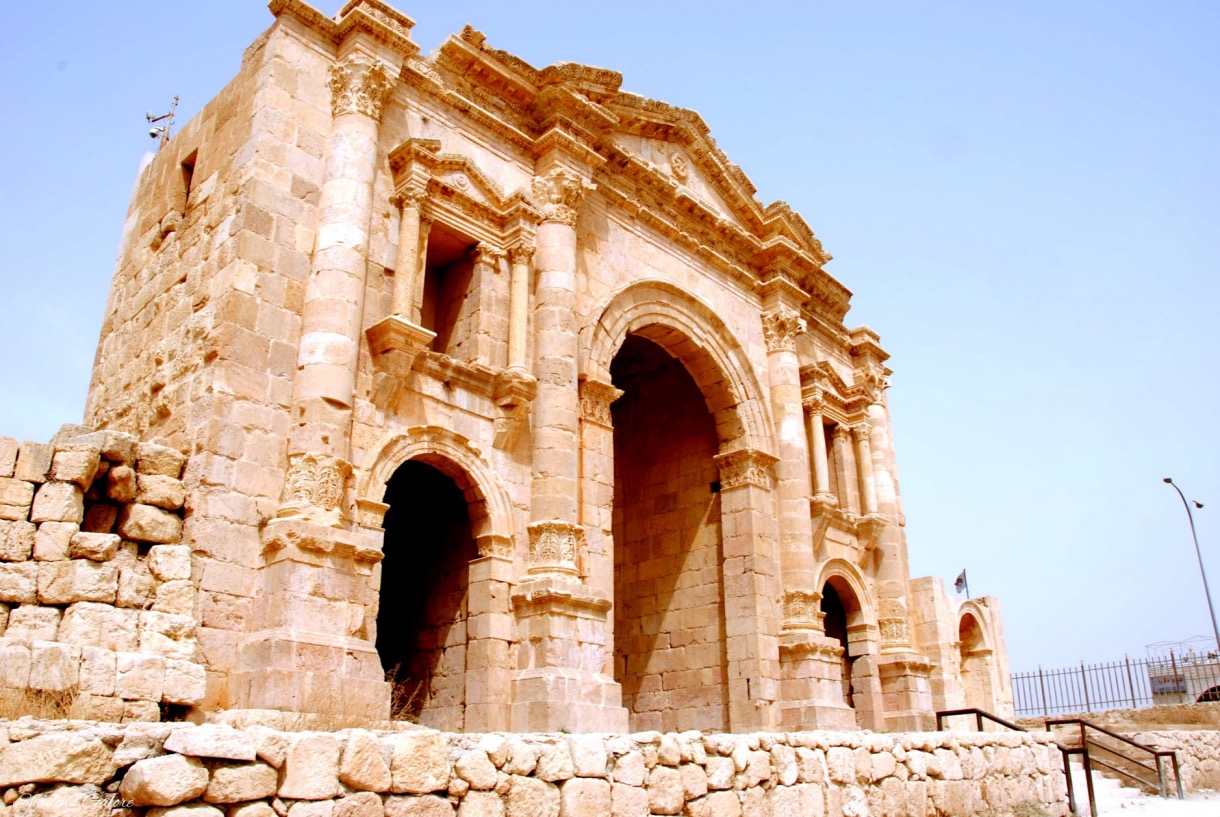 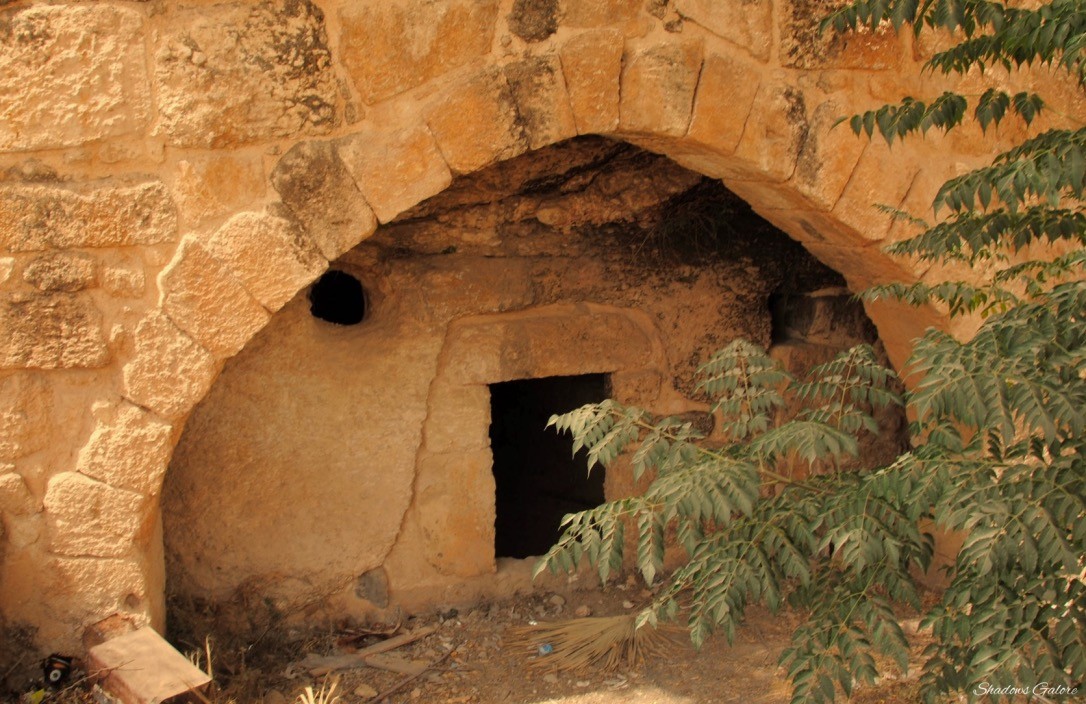 As you walk further inside, there are also some caves that are tombs of the royalties. South gate marks the start of the city limits.As I walked inside from the south gate, I was awed by what I saw. 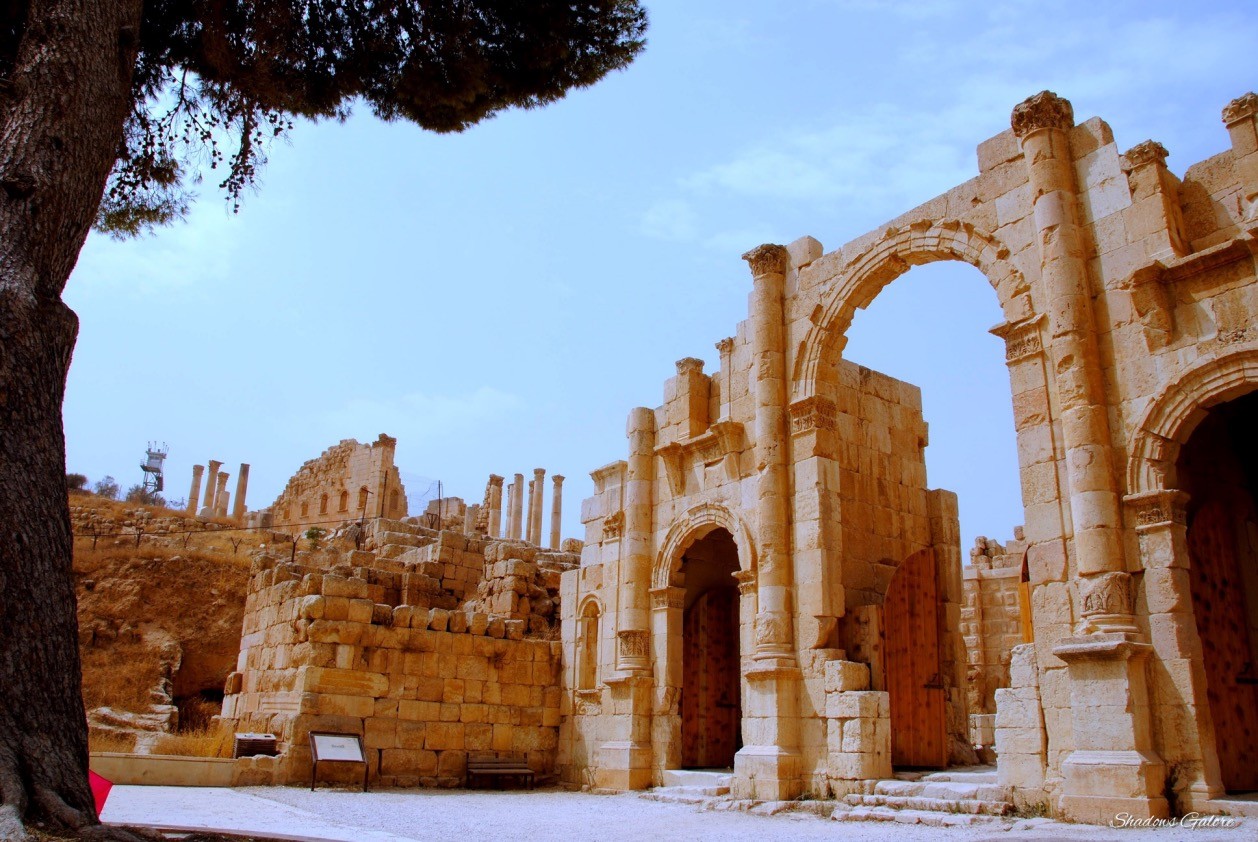 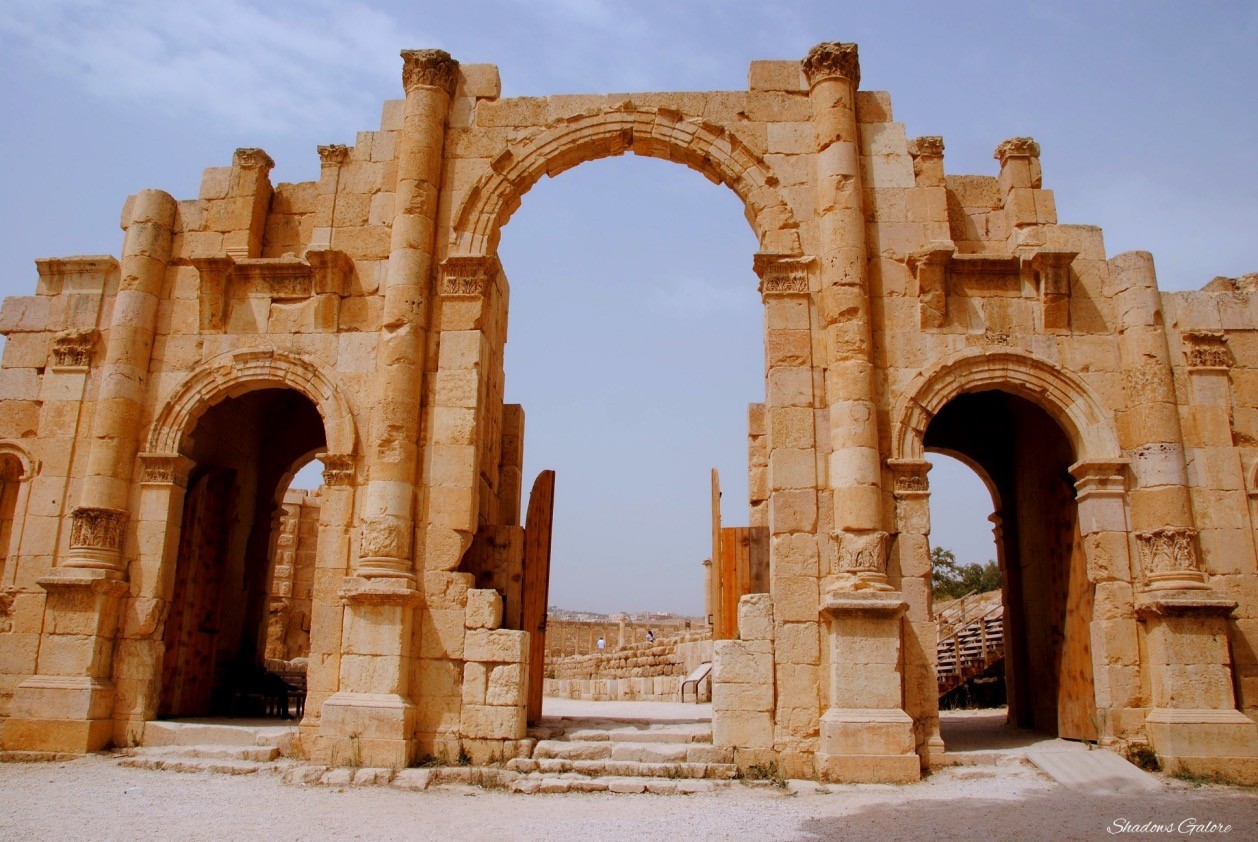 Strikingly similar to the Forum at Pompeii, Italy, Oval plazas are a regular part pf Roman architecture. Surrounded by a colonnade of 1st-century Ionic columns, the plaza used to be a market place in the past. The Jerash Festival held each year for 2 weeks in July, also take place at the Plaza. 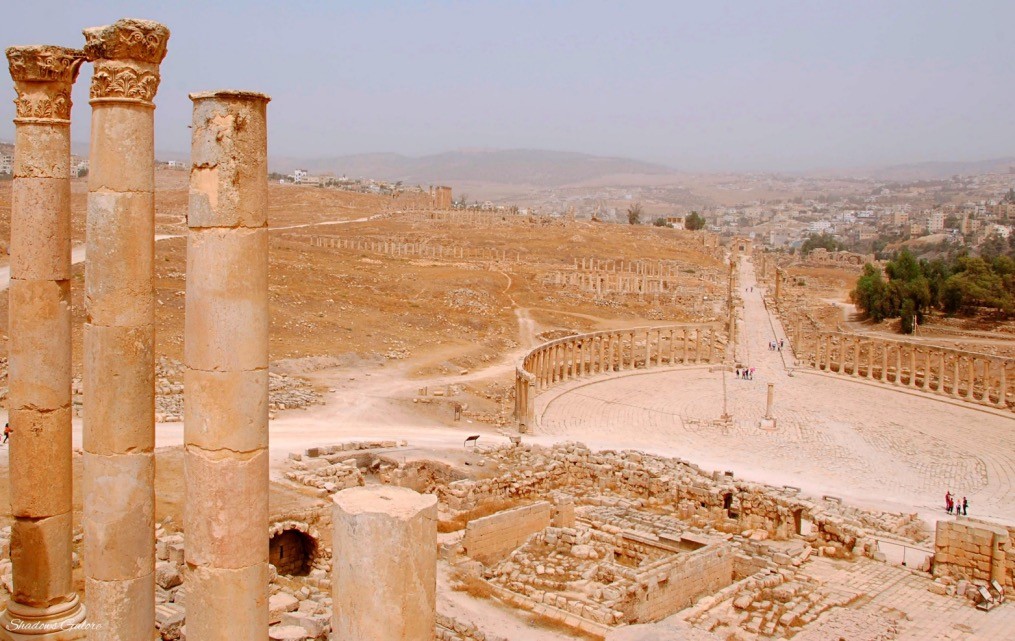 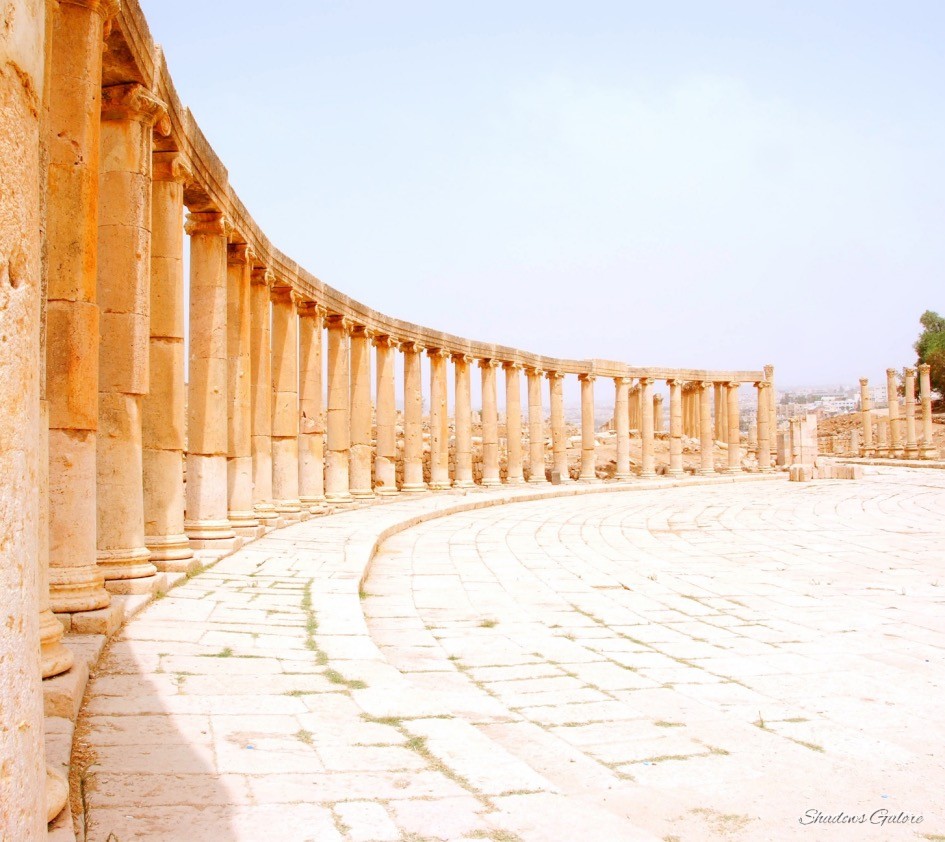 Jerash also has two theatres. The South theatre is larger than the north theatre. The Archaeological Museum houses artefacts, pottery, jewellery is located at the south theatre. We enjoyed some refreshing music played by the two musicians in the scorching sun at the theatre. I must say that the people of this place are very friendly. Even in the hot sun, the musician were jovial and got some nice photographs clicked. They did ask for money but that was just once, no more. 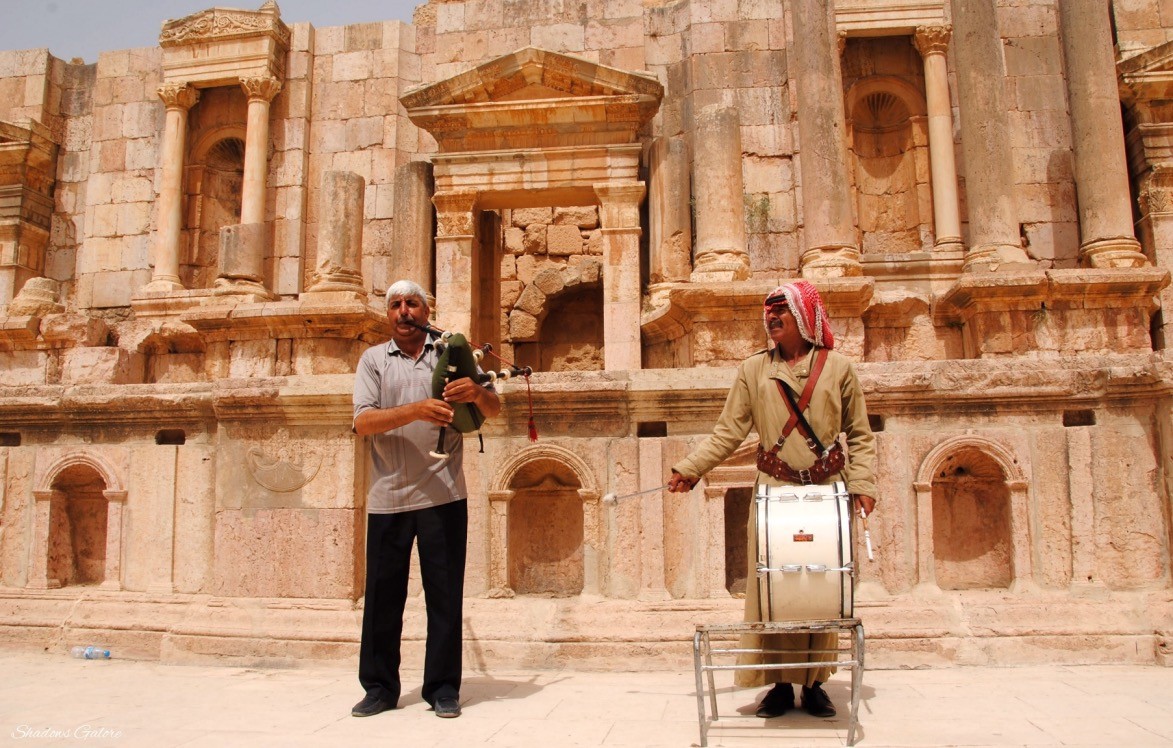 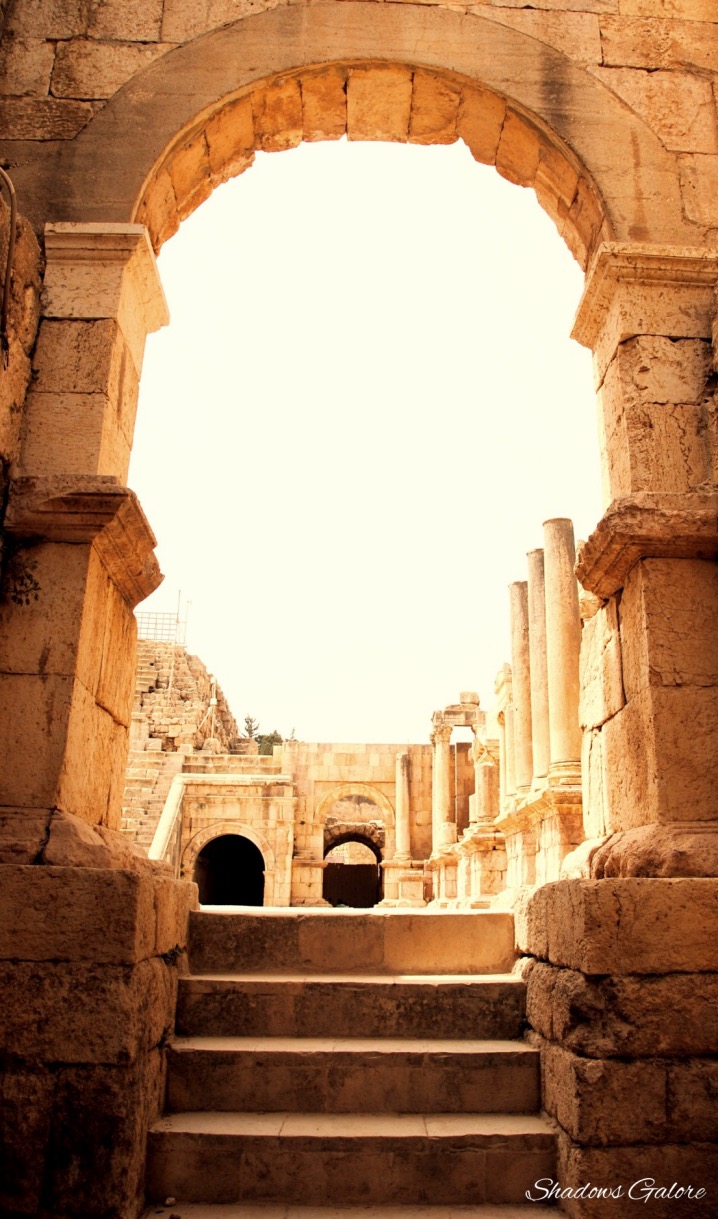 We went up the stairs just opposite the Oval Plaza, leading to the Temple of Zeus which dates back to the 162 AD. Ruins of the temple contain many gigantic Corinthian columns. There is a viewing point up the stairs here, that is a vantage point to click pictures of the entire site of Jerash.

At this point many of were really worn out due to the heat and decided not to go further. In the spare time, everyone choose the places to click more pictures. After some thought, I decided to at least go till the Nymphaeum. 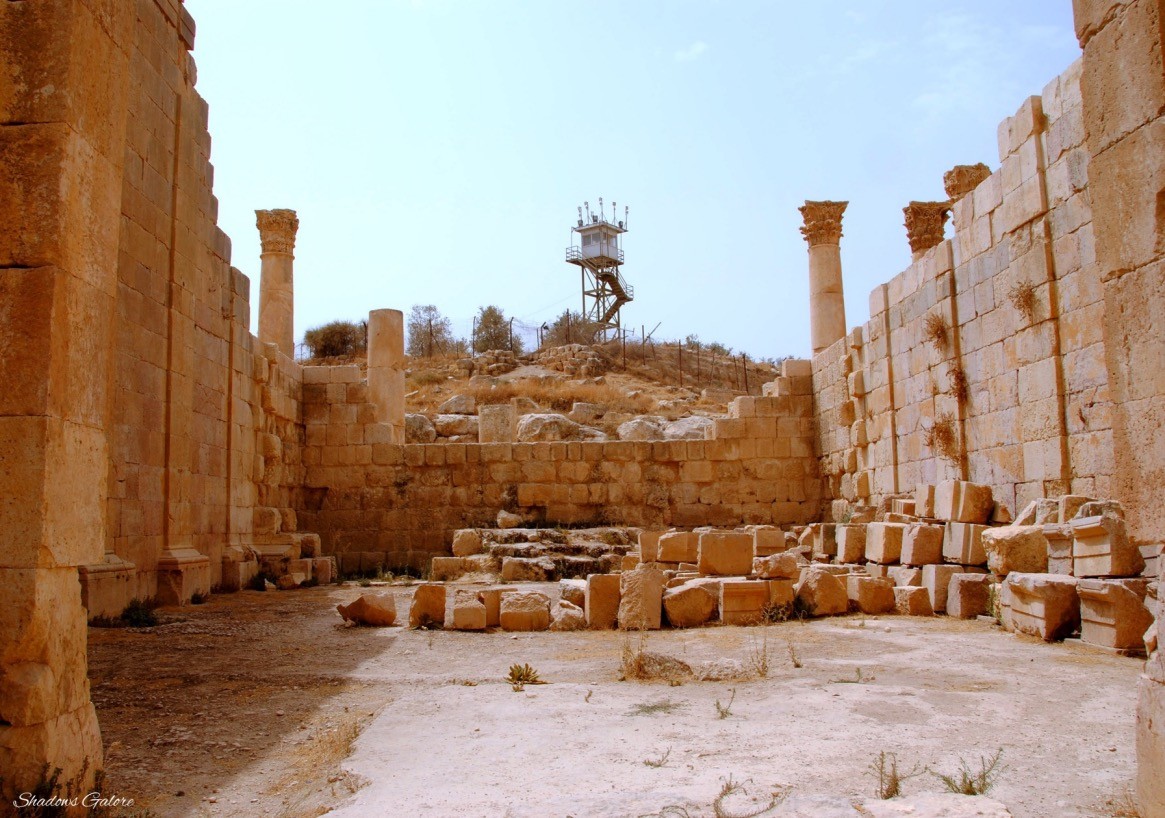 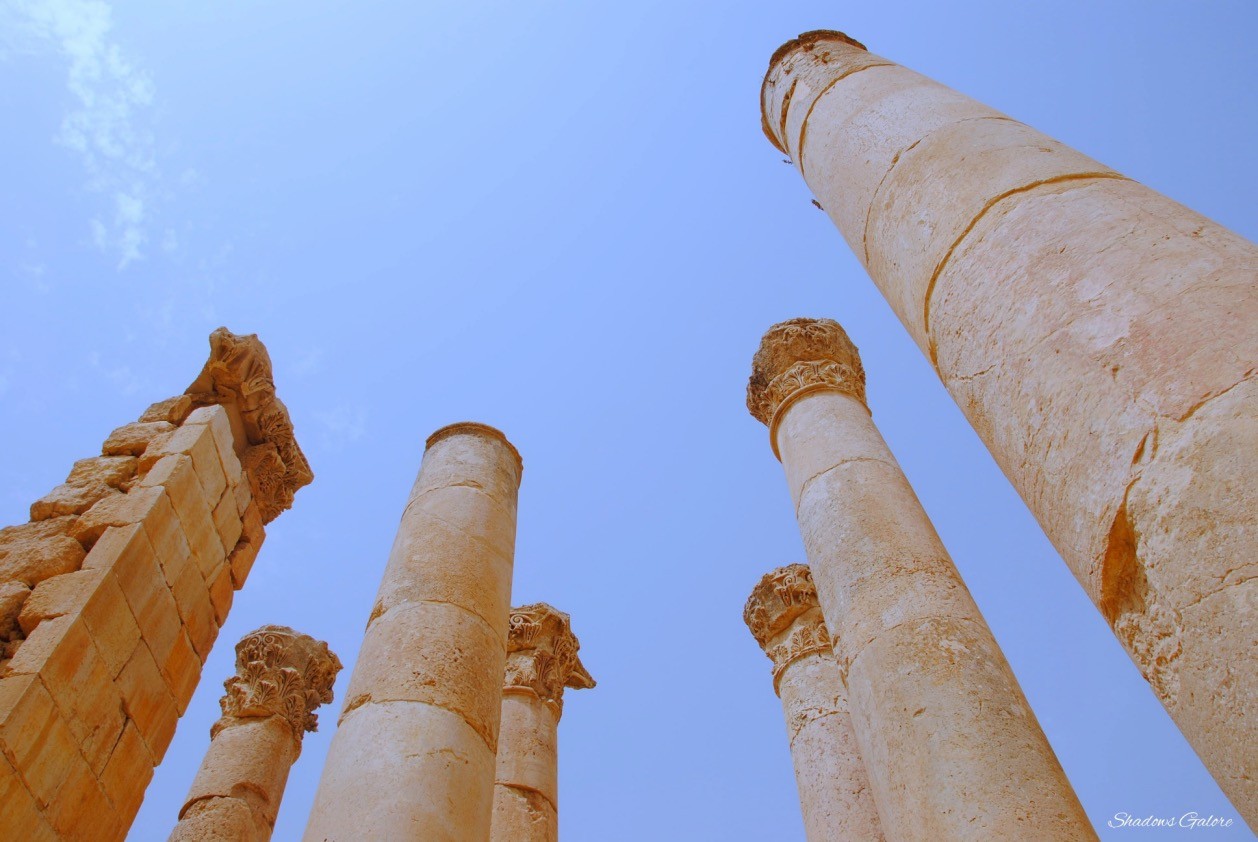 The main Roman road in Jerash leading to the Nymphaeum, Cardo Maximus is still paved with its original stones and bears the ruts of chariot wheels. The Street was remodelled in  170 AD and the original Ionic columns were replaced with a more decorative Corinthian colonnade. 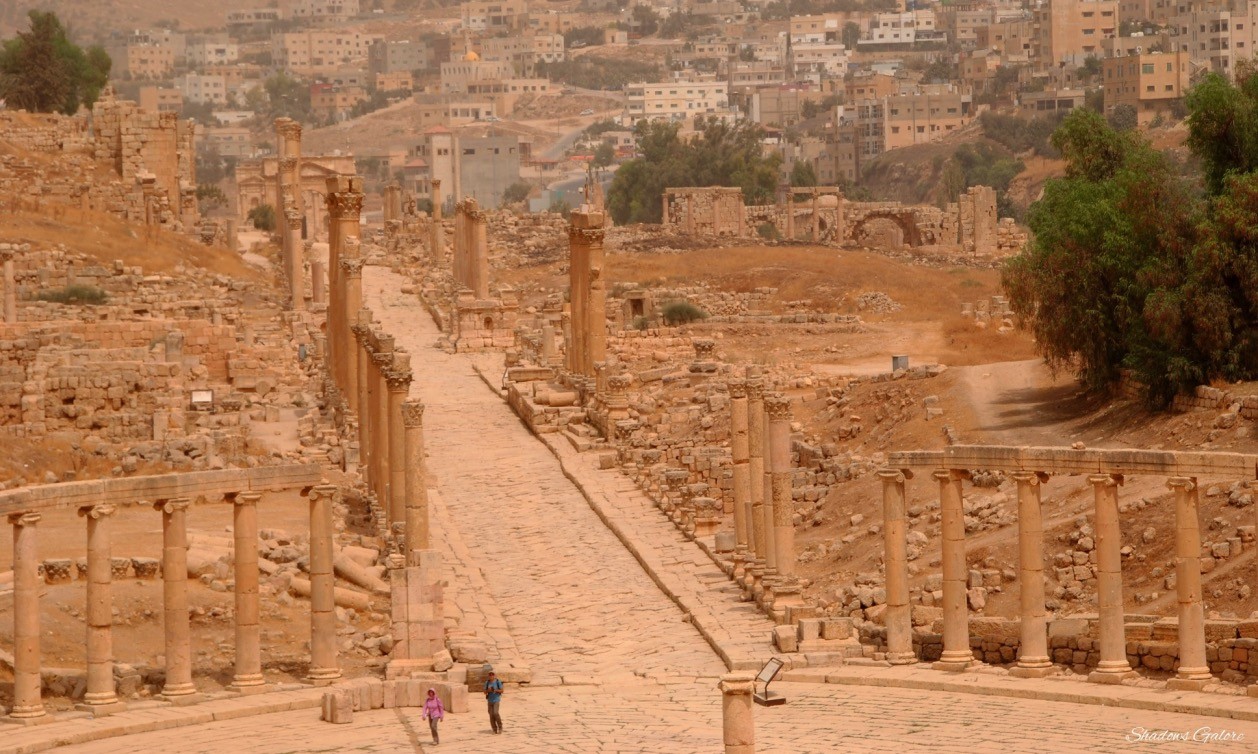 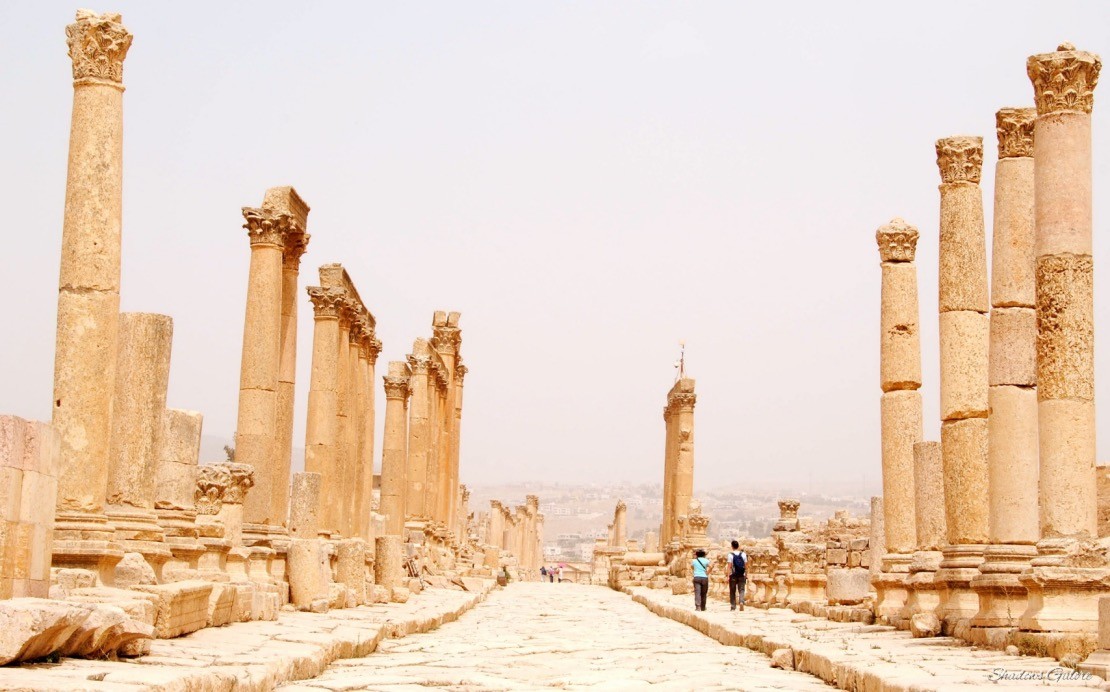 Nymphaeum and Temple of Artemis

Nymphaeum is an ornate fountain built in 191 AD and decorated marbles. It adorns a lions heads and is dedicated to the nymphs.The Temple of Artemis (150 AD) is a monumental staircase with high walls on the left of the Cardo. 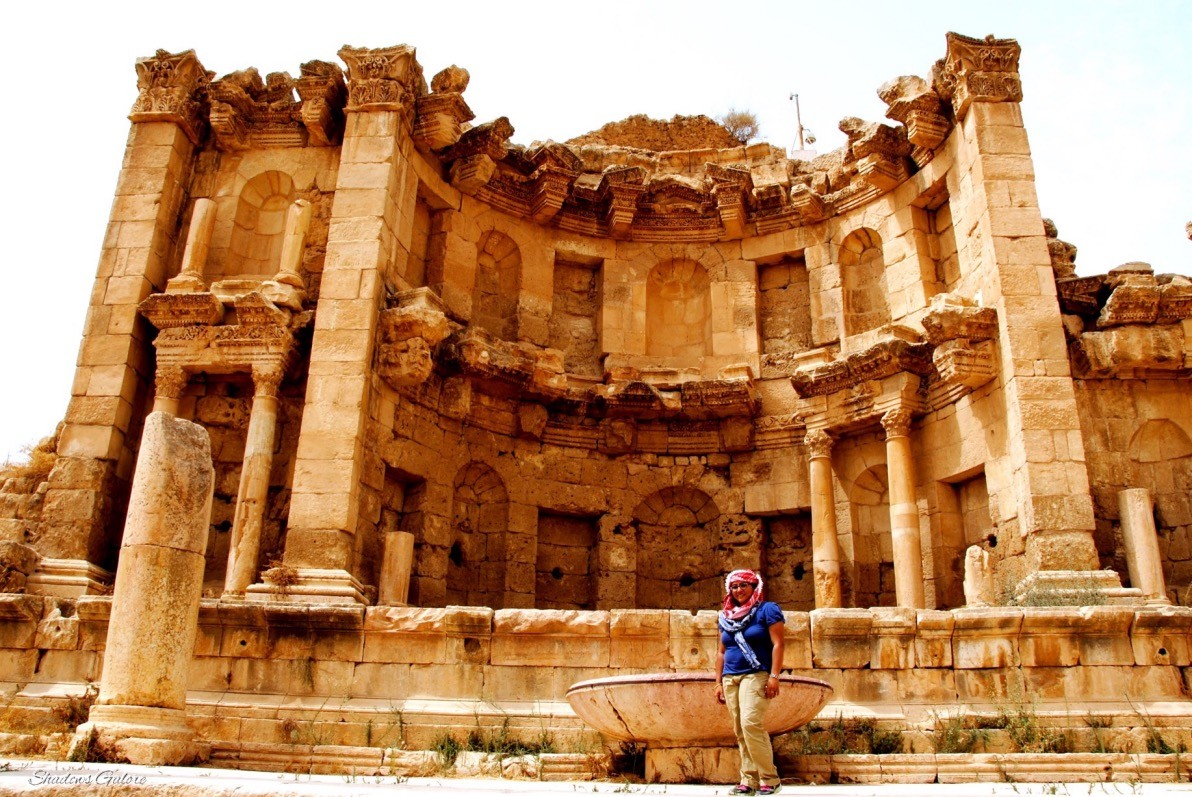 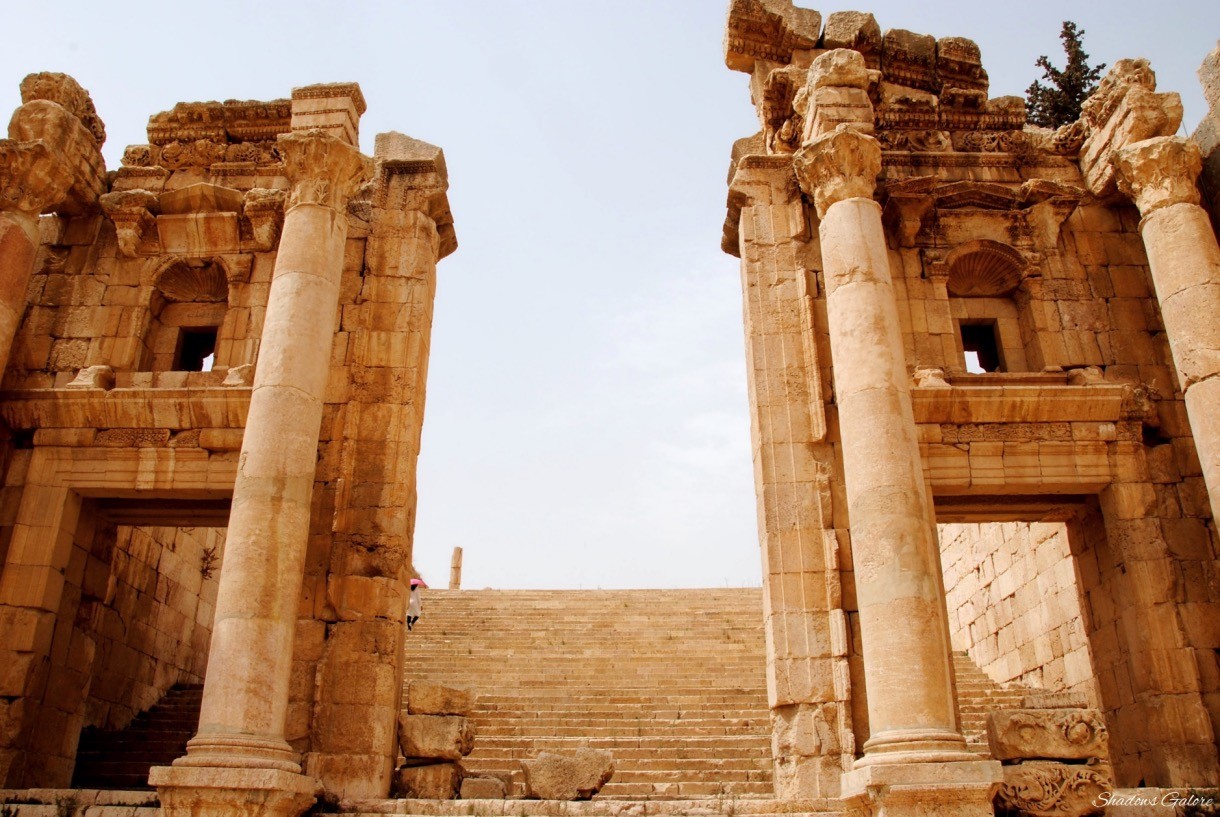 Thoroughly drained and thirsty, I was cursing myself for coming this far as the walk back was equally long. Sid offered to find some water for Sambhavna and me and we decided to wait for him at the temple. In the mean while I walked up to the North Tetrapylon just to get a few pictures and tick it off my list:) 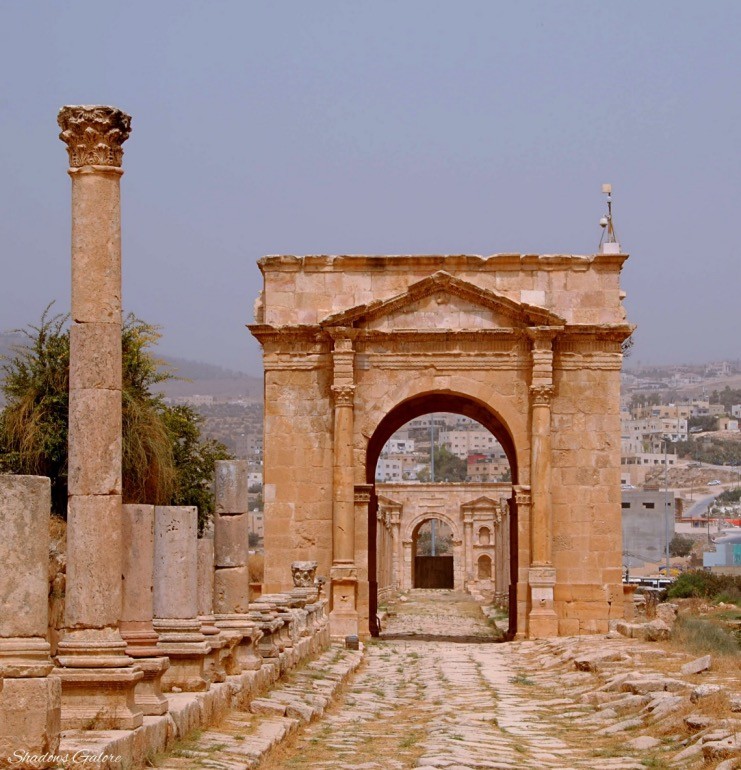 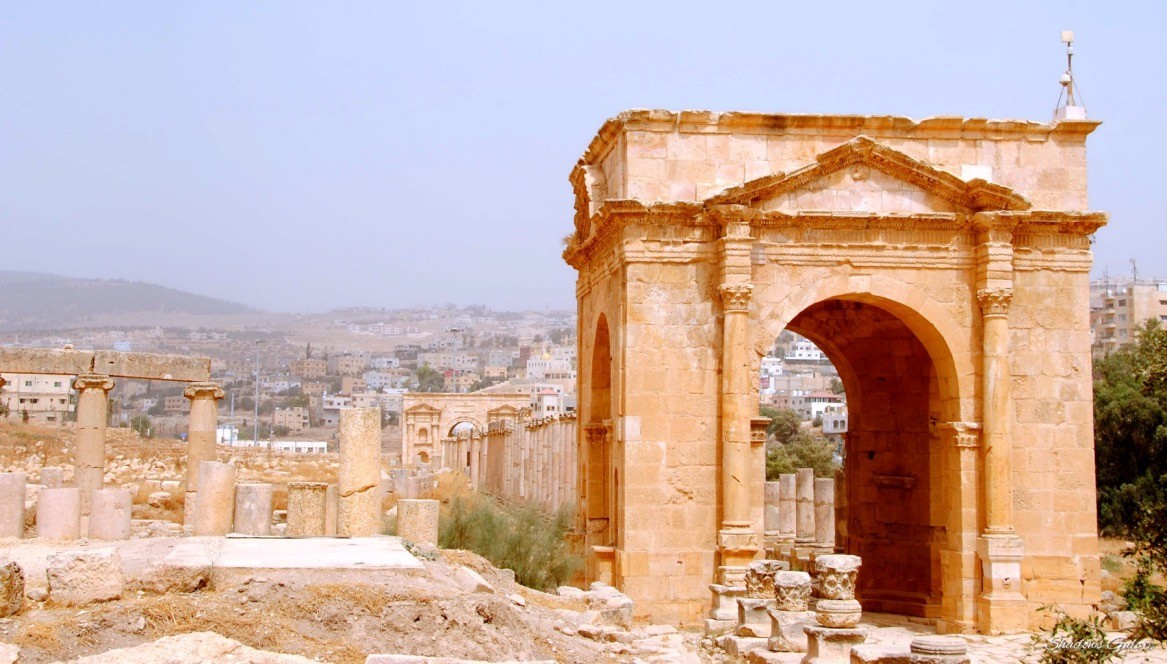 After almost 30 mins, Sid returned with water and saved our lives (literally felt so!) . We walked back as soon as we could as the rest of the group was waiting for us at the bus. It was time for lunch(finally!). We visited a nice garden restaurant and as usual got table full of some amazing Jordanian food. After almost 2 hours, we started for our next destination – Ajloun Castle. P.S – Jerash is a big site and worth exploring every inch. On the down side there is no facility of getting water or proper shaded areas. Its best to carry a lot of water, umbrella and quick energy food.
← Prev Next →