Our plans to stargaze during the night did not materialize. The sky started getting overcast in the late evening and it started raining by the time we finished dinner. I was feeling slightly breathless and the fact that I had got wet in the drizzle, did not help matters further. However, once inside the cosy sleeping bag,  all was well, till an event which cause some excitement in the middle of the night. 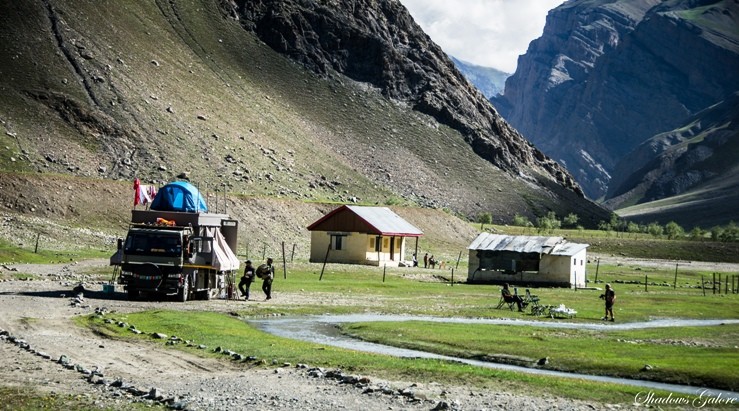 The Adventure of Lurking Shadows

At Meenmarg, Captain and Rohit went to sleep in the school nearby while we happily hung around Taurus (literally). Manashi and Vasu took the double tent on the top while Ekta, Vikram and I settled down on the single tents on the sides. At around 3 AM, we woke up with the sounds of screaming and banging on the roof of the Taurus and jumped out to see if there were intruders. Negi was on his toes within seconds and switched on the flash lights to see if there was anyone, there were none. After searching for some time, everyone was reassured that there was nothing to worry and we went back to sleep again, though a little shaken.

Later when we discussed this episode in detail, Vasu said she felt people walking around them on the top of Taurus though it was dark to actually see anyone. According to Manashi, at the very same time she was having a dream that she was late for the morning and someone had come up Taurus to wake her up, it was so realistic that she could almost feel the person coming up to her. When Vasu asked “Kaun hai?”, those people did not run away, to quote Manashi, “they just glided away”. Now Taurus stands a hefty 20 feet high and if even one person climbs down in a hurry or jumps, there was bound to be a noise. But we did not hear anything at all ! Though Vasu dismissed the idea of any paranormal activity and was teased by all that a bear had shown up at her tent, this little adventure remained unexplained.. 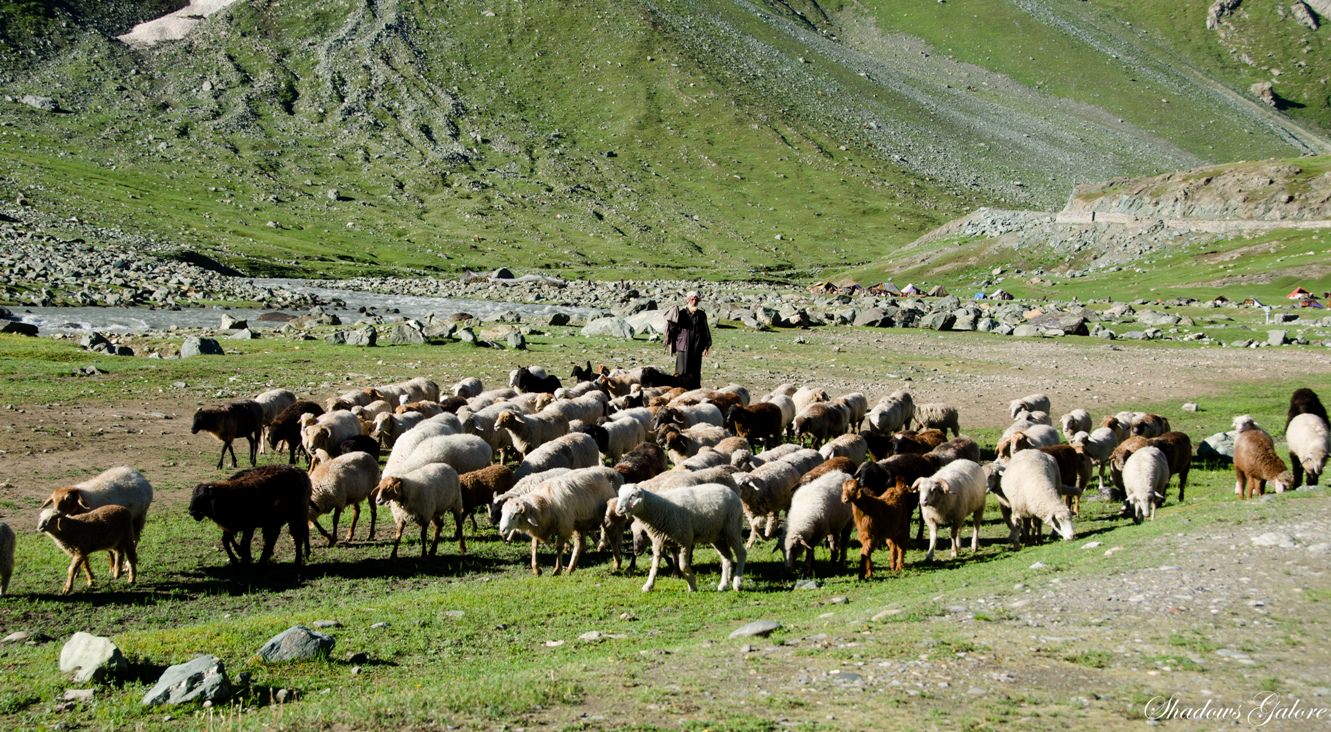 Morning Photoshoot at the Bakarwaals’

Clouds had scattered by the time the sun rose and the morning showed promise of a bright sunny day. Hot water was available nearby and while everyone queued to take a bath, some less hygienic among us, including yours truly, decided to skip this chapter of life crossed the road and went over to the Dera of the Bakarwaals with our cameras, planning to make best use of the morning light. 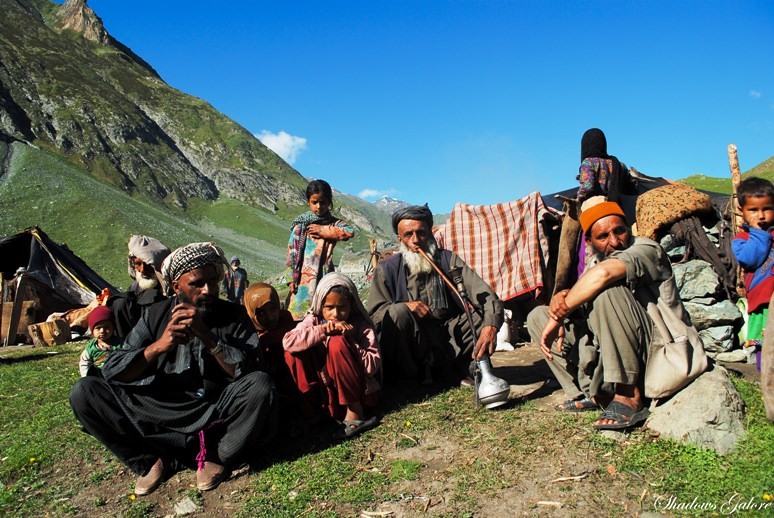 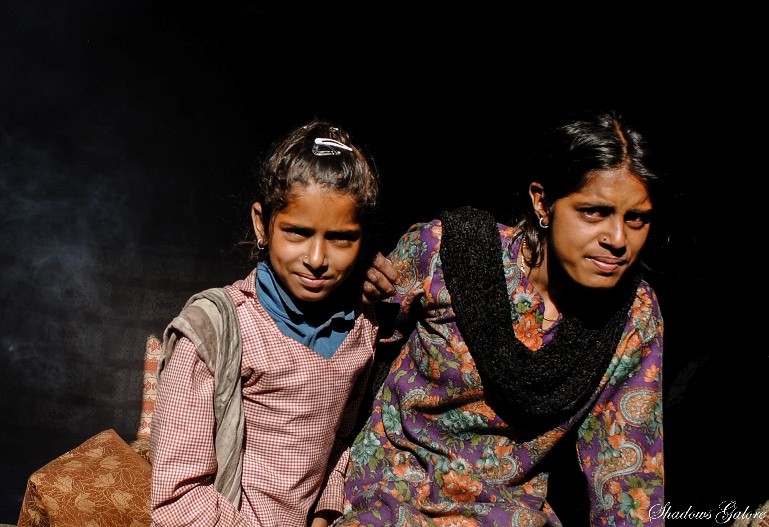 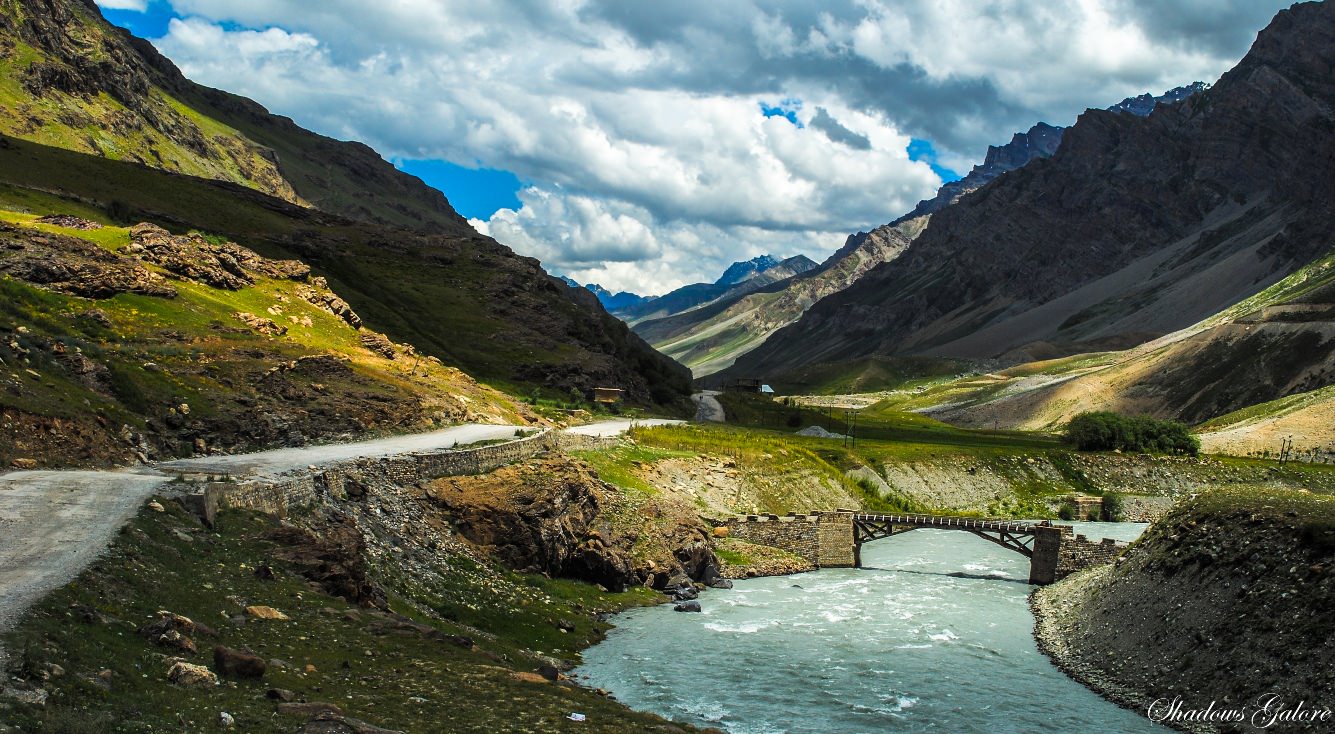 After a sumptuous breakfast near the stream, we packed Taurus again and started towards Ladakh again. This route was going to pass through some of the most iconic landmarks of the Kargil war. Drass is a green valley in the middle of high mountains and has the distinction of being the second coldest inhabited place on earth.

The road from Gumri to Drass is very bad, almost non-existent. As we drove along the river Drass, the beautiful scenery made for a very pleasant viewing, however the very bumpy ride made photography a very difficult task. It was by early afternoon that we entered the crowded alleys of the Drass town. We stopped to restock for some supplies and moved towards our next destination – The Kargil War Memorial. 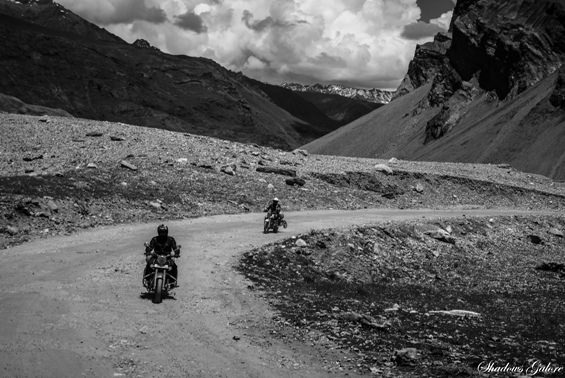 Though Drass is supposed to be cold, this particular afternoon was very hot and we scampered for shade as soon as we alighted at the Kargil War Memorial. The harsh sun gave no  indication of the superhuman effort with which our soldiers stand guard on the border. Lying at the foothill of the 16000 feet high Tololing, the memorial is  a proud reminder of the fact that a nation may be run by speeches and debates, but it is defended only by blood and iron.

As one stands facing the memorial, there is Tololing at the back, the 3-Pimples to its left and the Tiger Hill to the far left, mountain peaks which have been immortalized in the collective memory of the Indian populace; as have regiments like 18 Grenadiers, 17 Jaat and 2 Naga. This was the first widely covered war by India and men like Capt. Vikram Batra, Lt. Manoj Kumar Pandey and Grenadier Yogendra Singh Yadav and Rifleman Sanjay Kumar became household name for their exemplary courage and supreme sacrifice.

An officer of the Indian Army gives a brief to the visitors in the afternoon, an emotional account of how each of those peaks were painstakingly recaptured after much blood-letting. Later when I stood in front of the Golden plaque, capturing the names of the fallen soldiers through my camera, my vision blurred and I had to move on; martyrs are celebrated, shedding tears over them is like an insult to their sacrifice.

A banner at the memorial said – Fallen but not Forgotten. Vijay Diwas had been celebrated only a few days back and one officer was wondering why Capt Batra’s father did not show up this time, he always used to every year. On 25th July when we had started from Delhi, the elderly Mr. Batra was taking part in a march for OROP along with the army veterans, something which they were cheated out of 40 years back ! When a lone soldier stands guard on a god-forsaken forward post, is it too much for him to expect that while he stands there facing the muzzle of the enemy’s guns, his country stands at his back ? How does it feel to die for an ungrateful nation ? 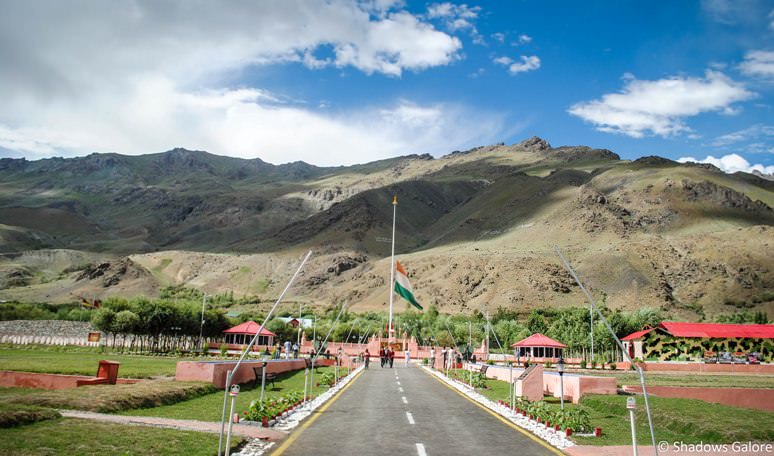 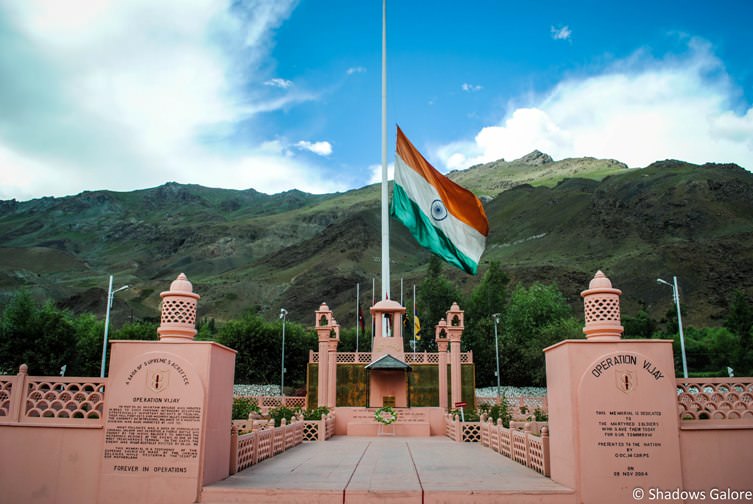 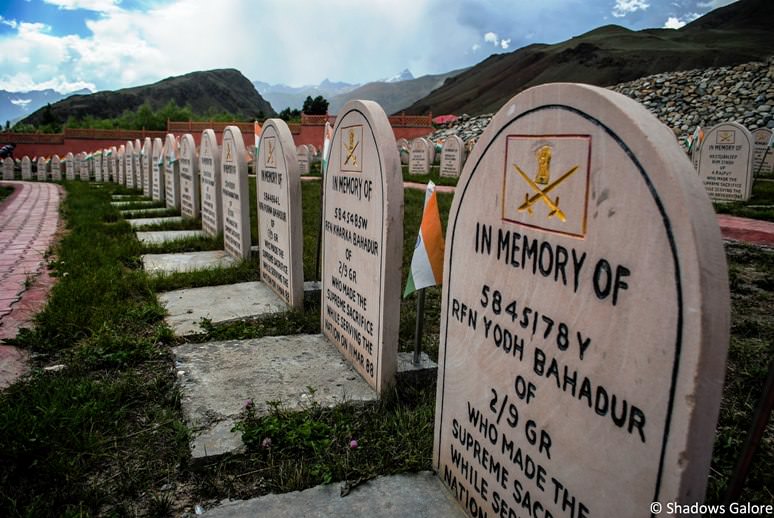 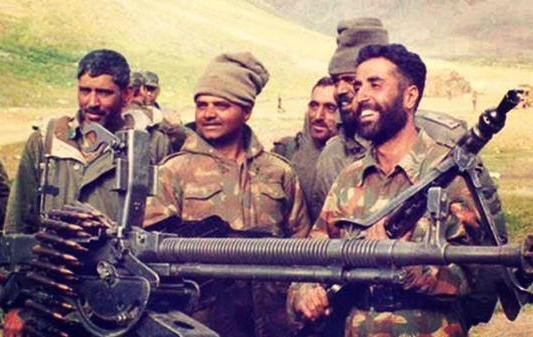 As I am writing this post, I recall that today is the birthday of Capt. Vikram Batra. Happy Birthday Shershah ! Hope the heaven is not too boring for you 🙂 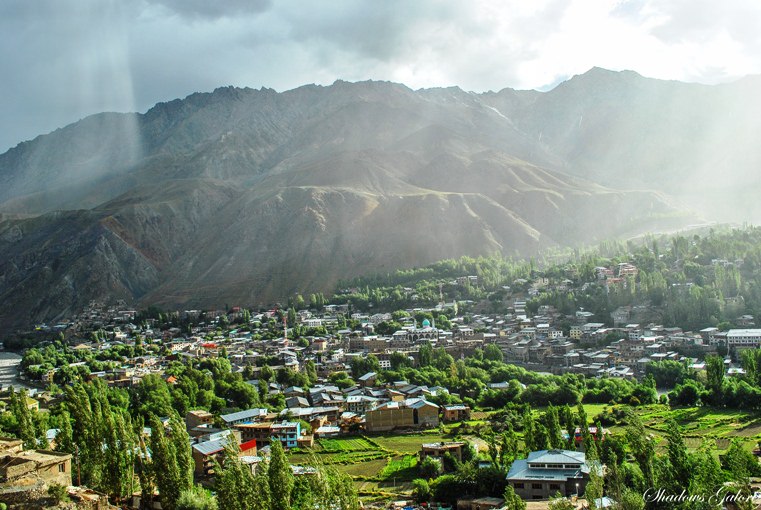 Kargil is about 56 KM from Drass and the road was now much better than the one that we had to bear since morning. The terrain changes rapidly and brown started replacing green as the primary colour, with an exception of some villages which sat picturesque in the middle of alpine forests and apricot orchards. It had started drizzling again and temperature came down substantially.

Located on the banks of the river Suru, Kargil still retains a lot of its old world charm. A confluence of the Dard, Balti, and Ladakhi cultures, the pulse of this town can be felt while taking a stroll in the old market area with its lovely old world charm. We stayed around Kargil for two days and enjoyed every moment of it.