Two years ago, while we were walking on the walls of the Jaigarh fort in Jaipur, the guide asked us if we had been to Chittaurgarh (Chittorgarh or just Chittod). He appeared surprised that we were visiting the forts of Jaipur, but did not care about seeing Chittod. Then he said – “गढ़ों में एक गढ़ चित्तौड़गढ़, बाकी सब गढ़िया “. There is only one fort – Chittod, rest are all fortresses.

No other fort in the history of India has myth, legends and romance woven around it as much as Chittaurgarh has. This largest fort in Asia is not just another castle built of stones, so much blood has been drawn to keep those walls stand tall with a proud defiance that it has become synonymous with valor and sacrifice. This eternal dream of Maharana Pratap is the living memory of a race that refused to bow down before the might of the invader when all others choose to crawl instead. 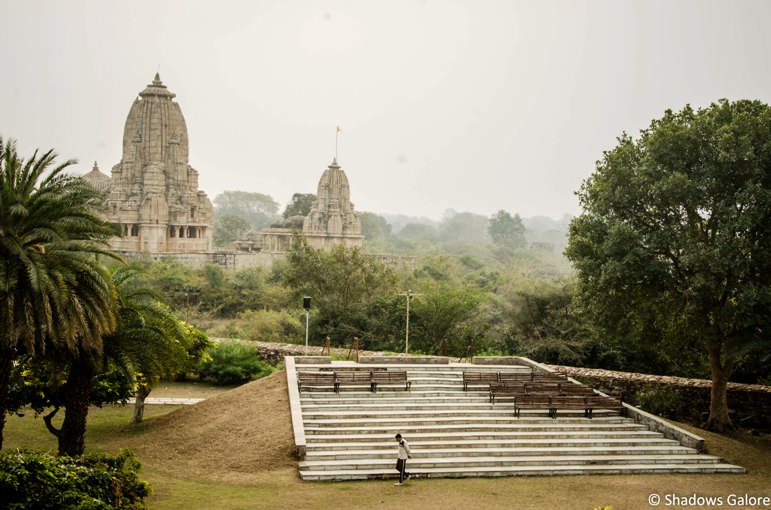 Therefore, the sole reason of our detour to Udaipur this time was to pay a visit to Chittaurgarh. On the very next morning of our arrival, we were on the highway that would lead us to ‘The Fort’.

We decided to hire a guide once we reached there, was a decision both good and bad – while he gave us some good anecdotes about the places and their history, he was in such a hurry that it spoiled the mood. High time, Chittod gets Audio-guides. 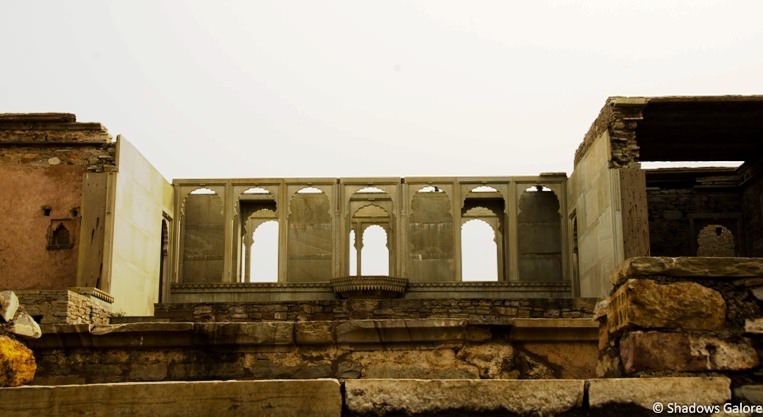 Rana Kumbha’s Palace, where the Golden Sun was kept

Our first stop was at the Kumbha Palace, a mammoth 15th palace built by Rana Kumbha. A fine specimen of Rajput architecture, this impressive monument housed the royal family, and included the stables and other buildings. Mewar’s symbol, the Golden Sun was once placed in this palace which would be worshipped by the kind every morning. Even though in ruins , this monument give a glimpse of its glory that would have been in the days of the mighty Ranas. 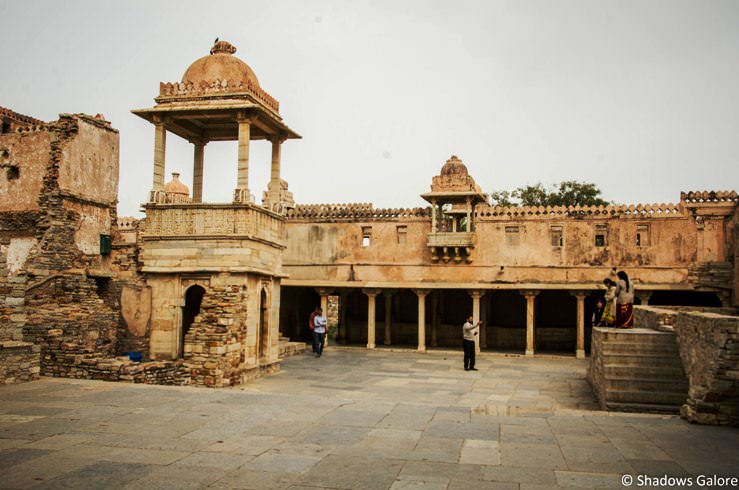 Kumbha’s palace is the birthplace of Rana Udai Singh and is famous for the legend of Panna Dhai. Threatened by a conspiracy by Banbir, the infant Udai was sneaked out by Panna Dhai who replaced the prince with her own infant son in the cradle, to be killed by the assassin.

Amidst the ruins of the Kumbha’s Palace, with Meera Bai’s Palace in the background

Once he said to me: “Become so still you hear the blood flowing through your veins.”

Within the compound of Kumbha’s palace is another building where famous Saint Poet Meera once lived. Meera was married to Prince Bhoj Raj, the eldest son of Rana Sanga of Chittod. She is a household name for her peerless devotion to Lord Krishna and lives through the hymns she created and sang. 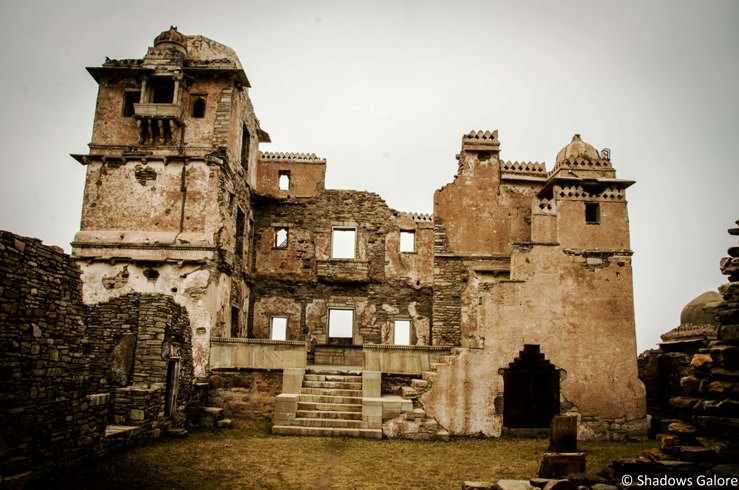 This is where Meera Bai lived ..

Built by Bappa Rawal and later modified by Rana Kumbha, this desolate monument stands on the edge of the hill on which the fort is situated and is now inhabited only by pigeons and parrots. It has a very forlorn feel about it, listen closely and you may hear something .. 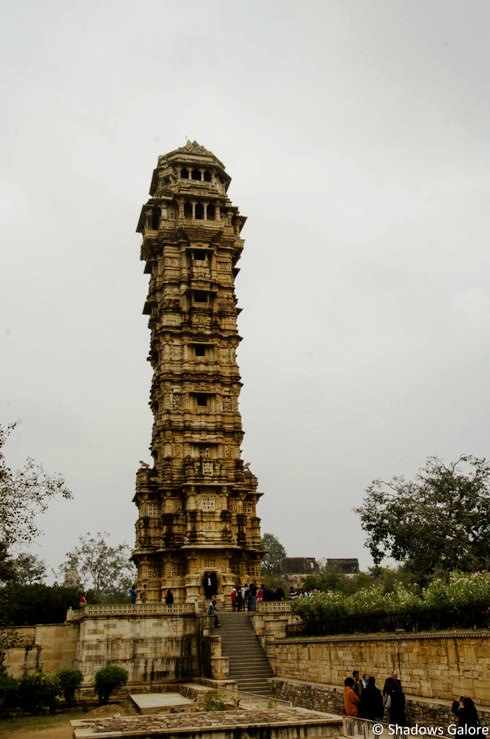 Adjacent to Rana Kumbha’s Palace is the most well-known symbol of Mewar and Chittaurgarh – Vijay Stambh. In the past, one could enter this compound from the palace but now the gate has been closed for repair and one need to go out and then enter the from a smaller gate. 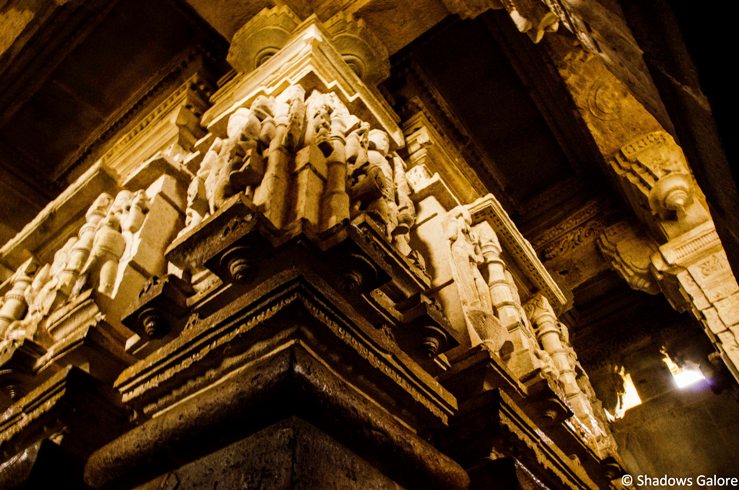 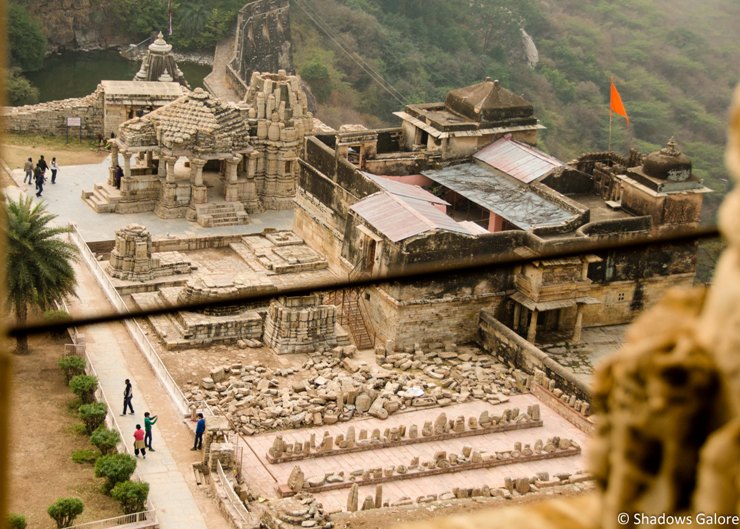 A Bird Eye view from the top of the Vijay Stambh

Vijay Stambh (Victory Tower) is a huge nine-storied tower made of red sandstone and is the focal point of the fort. It was erected in 1440 AD by Rana Kumbha to commemorate his victory over Sultan Mehmud Khilji of Gujarat. This magnificent architecture is lavishly adorned by scenes and images from Indian mythology and is a sight to behold. We climbed all its 157 steps to reach the top to take a view of the fort around us. The insides have equally rich carvings and carry the narrow red staircases have a mystical feel about them. Vijay Stambh has been designated a World Heritage status by UNESCO.

Near Vijay Stambh is the Samiddhesvara Temple. Built in 1150 AD by King Kumarpala of the Chalukya dynasty, this temple has the idol of the three-headed Shiva. It is also said to be the Trimurty – Brahma, Vishnu and Shiva. 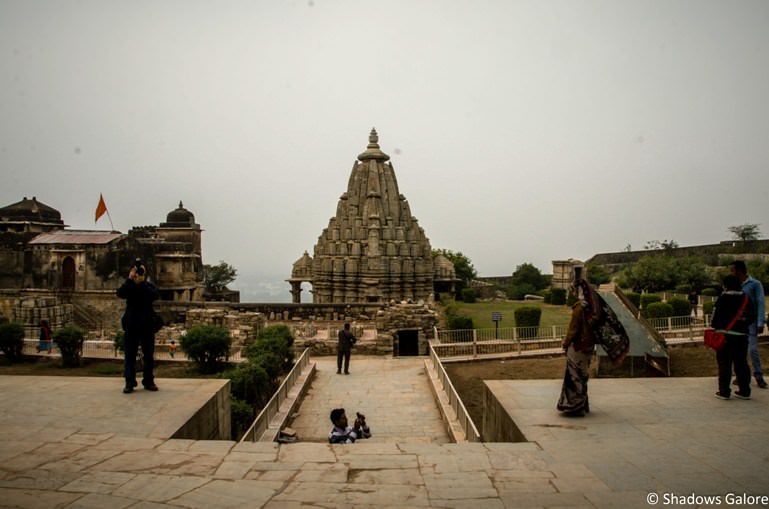 Next to Samiddhesvara Temple is the Goumukh Reservoir, named after the origin of Ganga. It is a large reservoir, the most prominent among the 22 in Chittod, and is fed by underground streams. It gives a magnificent view of the ramparts of Chittod and has been the subject of many iconic images of the fort. Unfortunately, I had set my camera in high ISO mode while inside the Vijay Stambh and as a result the photos got overexposed, they look weird even after recovery .. 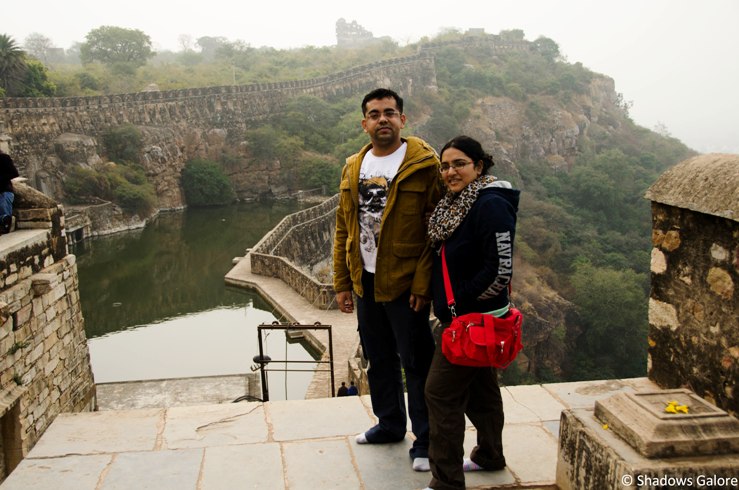 Outside the Vijay Stambh is a supposedly Rajasthan Tourism cafeteria which sells refreshments at inflated prices. They ‘graciously’ allow people to use their wash-rooms only if they have purchased something from them. 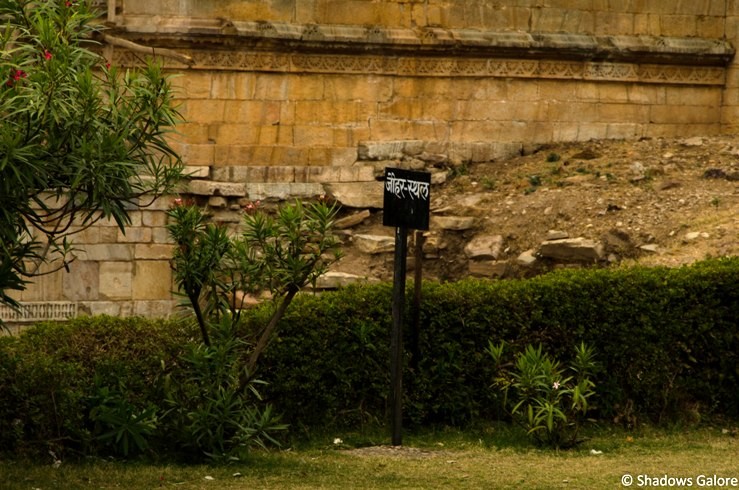 Chittaurgarh was seized thrice in its history and every time the seize culminated in Jauhars and the destruction of the fort. Jauhar was the last act of defiance by the Rajput women in the face of imminent defeat, where they would light a holy pyre and jump into it to avoid dishonour in the hands of invading armies. This was usually followed by Saka, where the remaining men would smear the ashed of their women on their foreheads, don the saffron robe and march towards one last battle.

The First Seize (1330 AD) – Enamoured by the beauty of Rani Padmini, Allauddin Khilji, the lecherous Sultan of Delhi laid seize to Chittod with his armies. Rana Ratan Singh, Padmini’s husband, was treacherously  imprisoned by Khilji. The brave Rani, with 700 of her chosen warriors, managed to rescue Rana however they were outnumbered by the Sultan’s forces and the Rana was killed on the outer gates of Chittod. Instead of surrendering to Khilji, Rani Padmini with the royal women committed Jauhar. Though the Rajputs were defeated, the sacrifice of Rani Padmini and Rana’s Generals Gora and Badal became immortalized in the folk lores.

The Second Jauhar (1534 AD) – Besieged by the Sultan Bahadur Shah of Gujarat, Rani Karnavati sent a Rakhi to Humayun and the Mughal Emperor rushed to her help. However, by the time he reached Chittod, the Rajputs had been defeated and the fort had fallen. 13000 women committed Jauhar and the remaining 3200 men marched out of the fort for the last battle.

The Third Jauhar (1567 AD) – Times changed and this time it was the Mughals who were laying siege to Chittaurgarh, led by Emperor Akbar. Vastly outnumbered, the Rajputs continued to hold on for four months, till their supplies were finished and Commanders killed. Instead of surrendering, the Rajputs chose to fight to death. Almost all Rajput women in the fort committed Jauhar and the men perished fighting. Furious over the Pyrrhic victory, the “benevolent” Akbar had the remaining 30,000 civilians of the forts massacred.  With this last battle, Chittaurgarh passed into the annals of history… 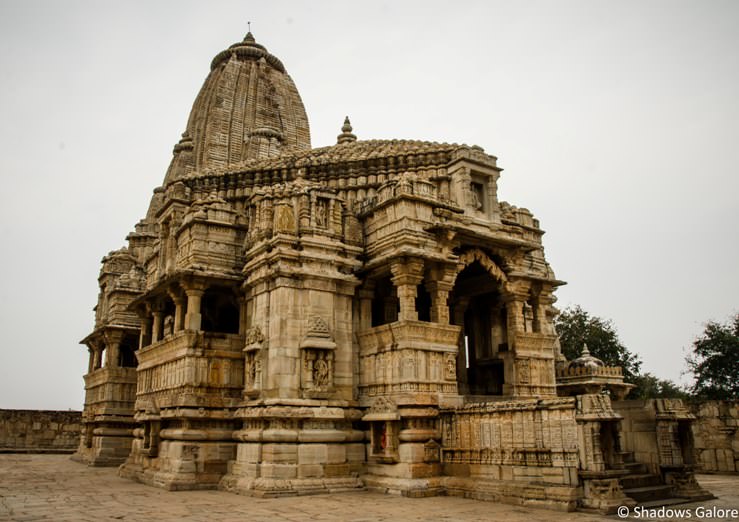 From the Vijay Stambh, we drove on via Kalika Mata Temple (an ancient Sun temple, now dedicated to Goddess Kali) and then reached the beautiful Meera Temple. Built in 1449 AD by Rana Kumbha, this majestic temple is dedicated to Lord Vishnu. Adorned with intricate stone carvings, a part of this temple looks like the Jagannathpuri temple in Orissa. On one side is a small temple dedicated to Lord Krishna, with an idol of Meera. After Ranakpur, this remained as the most impressive temple I have seen in Rajasthan ! 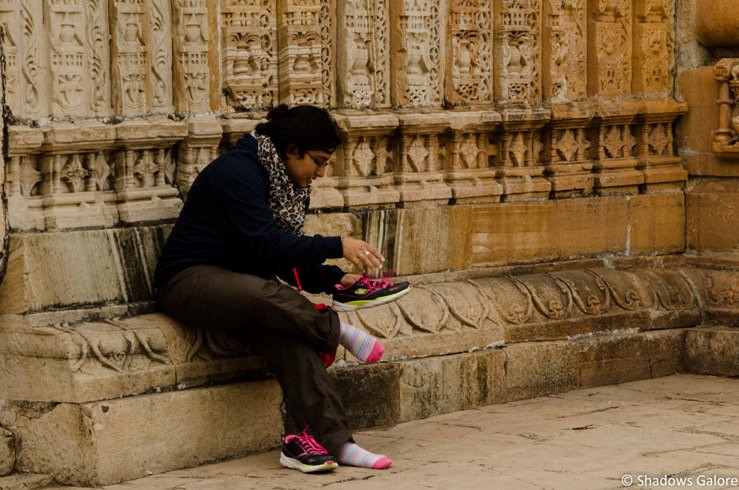 Ekta at the Meera Temple 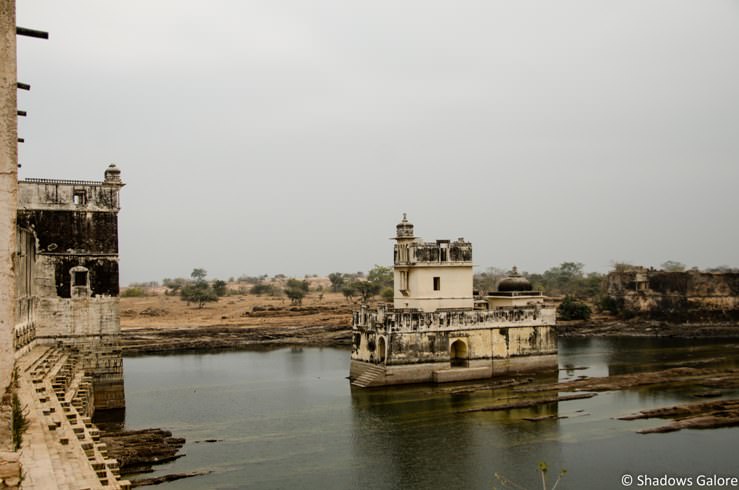 The closest Khilji came to Rani Padmini was when the Rana reluctantly agreed to let him take a glimpse of her on the steps of her palace from a mirror in another building, on the condition/ threat that if he turned, his head will be cut off. Rani Padmini’s palace is a relatively plainer white building in the middle of a lake where the Queen used to spend her summer time. Though not of great architectural merit, its value lies in being associated with one of the bravest and most famous women of Rajputana. Today the area is laid out with sprawling gardens of roses, and it is difficult to imagine the horrors that took place here centuries ago. 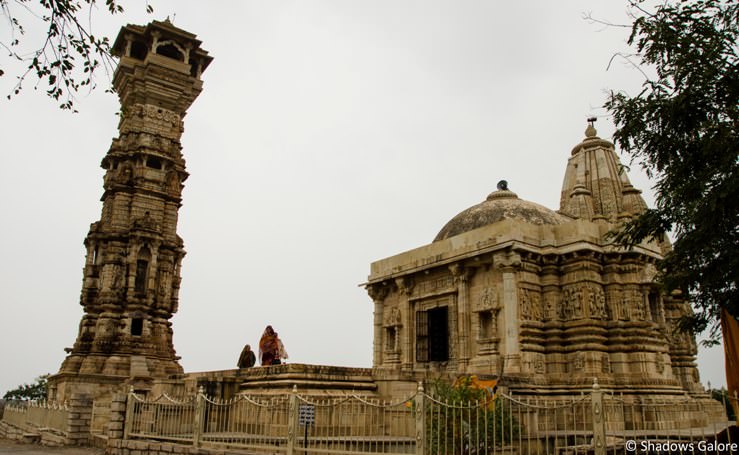 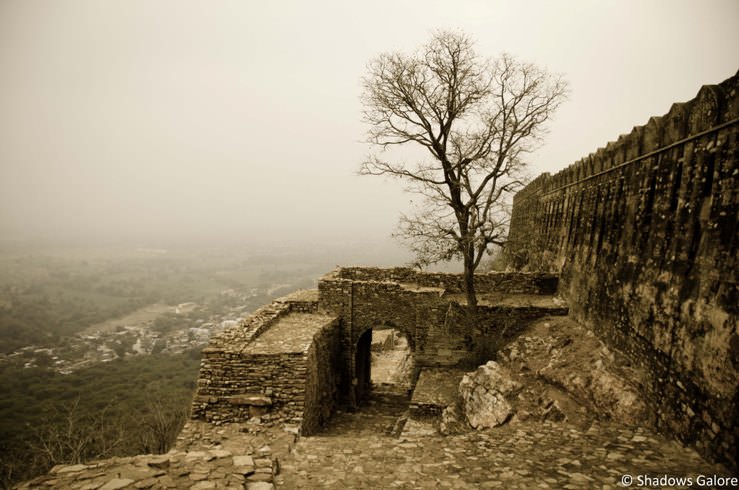 We were a little tired after this, especially after the journey from Pune to Udaipur and then to here, and a little shaken by the cold. So the rest of the exploration of the fort was wrapped up in haste. We went past Kirti Stambh (Tower of Fame), an impressive tower built by the Jains in tribute to the Jain Teerthankar Rishabhnath Ji. This seven storied tower has images of the Jain Monk on all the sides, and the intricate carvings are a befitting match to the Vijay Stambh. We also went to the Suraj Pol, one of the gates of the fort and looked at the panoramic views of the vast plains below. There is a small museum in the fort run by the Government, but it was not something to talk home about. 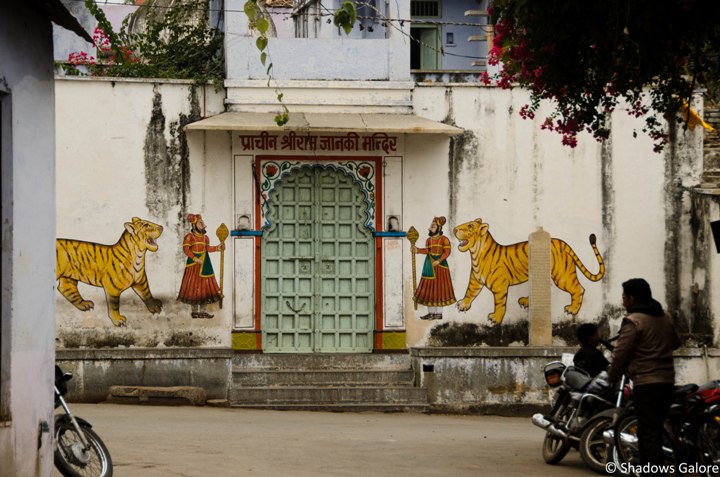 Chittod is not just the fort, a sizeable population lives here now and there are narrow lanes, houses, markets in one part of the town. We even went to a “RTDC” shop where the shopkeepers tried to sell us medicated quilts which would help in pain relief and some other quirky stuff but we were in no mood of shopping and came out after some time. It was time to go back to the Railway station and towards our next destination. 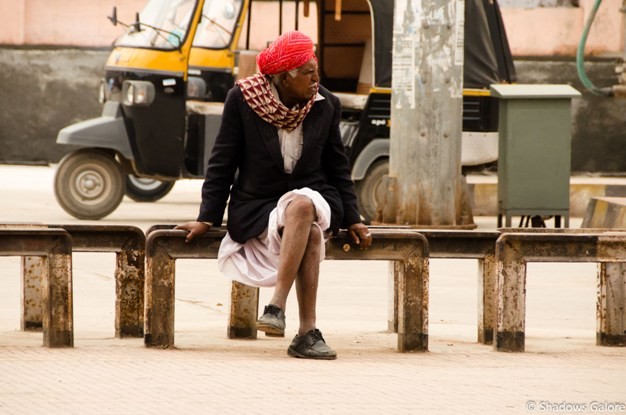 Our last image of Chittod, an old Rajasthani man at the Railway station ..

Chittaurgarh, to me, has been more than just another fort made of stone and mortar. It is a symbol of defiance, of the indomitable spirit of man in face of overwhelming adversaries. It is self-respect, valour, sacrifice and loyalty woven together in a fine mesh which has inspired generations of Indian nationalists to defy Empires with nothing but steadfast courage. If the Greek have their Thermopile, the British have Maiwand; we have Chittod.