The Dense Forests of Satpura – Prologue

“The dense forests of Satpura,

I had first read these lines by Bhawani Prasad Mishra in our Hindi text-book at school (he has also written a short story with the same name). Somehow, the quirkiness of these lines stayed on and with it, a hidden wish to visit those dense forests of Satpura.

So when a call came from the Pugdundee Safari to visit them at their Denwa Backwater Escapes  in Satpura, there was no saying ‘No’ this time. I had just two leaves left for this year and they were just enough to help us escape from the city-life which was driving me mad. A few days away from work, deadlines, escalation and seemingly endless meetings was what I needed, and this trip was offering exactly that, and much more.

One fine Thursday morning, we were standing on Platform No. 1 of Itarsi Railway Station, waiting for our driver to pick us up. As we drove through the broken and  dusty roads of the sleepy town, I must say that I was not very confident that we were going to have a great experience there. Thankfully, I was wrong ! 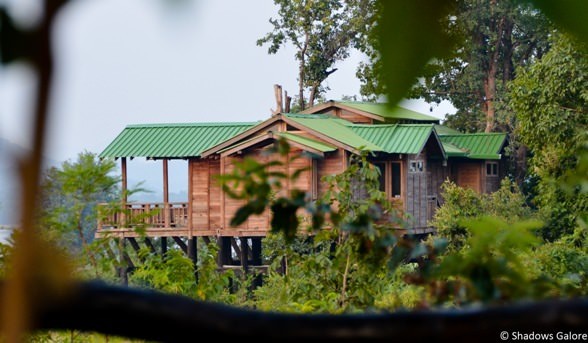 After a 90 minutes drive, we turned right from the main road and entered the buffer zone of the Satpura National Park. Green paddy fields started giving way to trees of Saaj and teak and sunlight started coming down filtered by their large leaves, still green for the fall. After another 17 KM, we were at the gates of our home for the next 4 days.

Since this was the first day of the tourist season, we were the first and only guests to arrive on that day. We were welcomed by Ashish, the manager of the lodge, and Chinmay – a remarkable young naturalist, who was to be our companion and friend for next 4 days. The beautiful cottage given to us, overlooking the Denwa backwaters, was a case of love at first sight. We were amazed at the thoughtful way in which they have designed the place. This lodge is just the right mix of beauty, art and luxury – in the middle of a jungle. 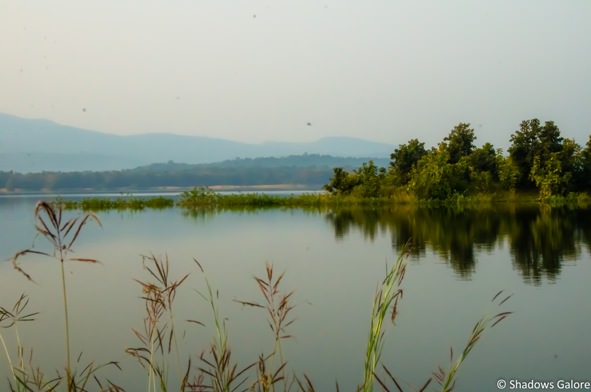 Beautiful sight of the Denwa River from our resort

As a primer for the days to come, Chinmay and his associate Anurag invited us to join a bird watching activity in the buffer zone.  For next one hour or so, we walked in the middle of green fields and marshlands along the river, binoculars ready, and got a ready reckoner of the bio diversity of this region. Most useful was the way our Naturalists explained the behaviour of each bird species and how they differed from their own subspecies. 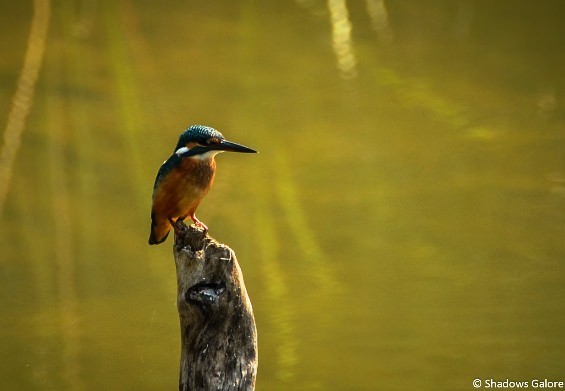 The Common Kingfisher for his daily bfreakfast

It was our first time capturing the shot of a Kingfisher up close, mascot of our favourite beverage, sitting majestically on a long twig on a ‘fishy’ pursuit. There were at least three subspecies of Kingfisher that we were able to find that day.  Then there were White Broad Wagtails which fly as if following a Sine wave of their own. Engrates are another species while like to graze with the cattle, in a way slightly different – as the wet earth gets disturbed by the foot of the animals, worms hidden inside the soil come out and these birds feast on them. After our trip to Dandeli, I had bought Salim Ali’s Birds of India; now am going to read it more seriously for our next trips. 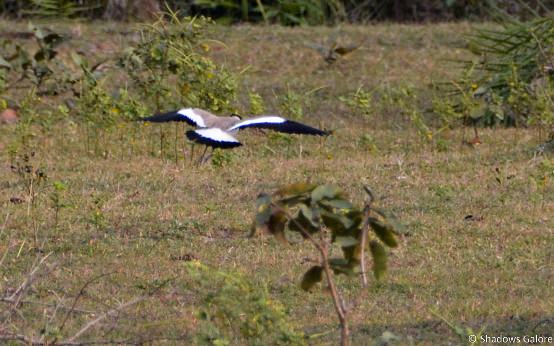 An Engrate . I need a better lens

Birds are not the only eye-catchers in this region, the place is rich with dozens of varieties of butterflies and dragon flies. As the cold dewy morning recedes, these butterflies come out to bask in the warm sunshine and can be seen everywhere. The butterflies have interesting names – Commander, Pansies, Baronet and so on.. 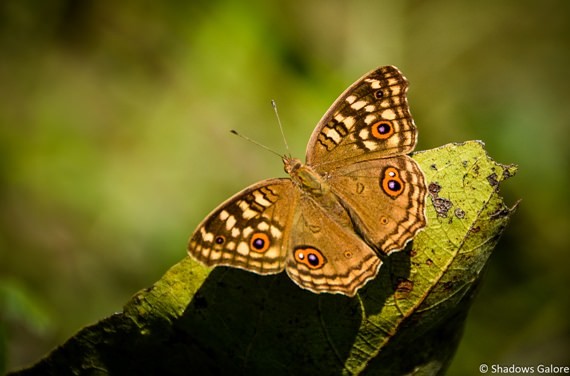 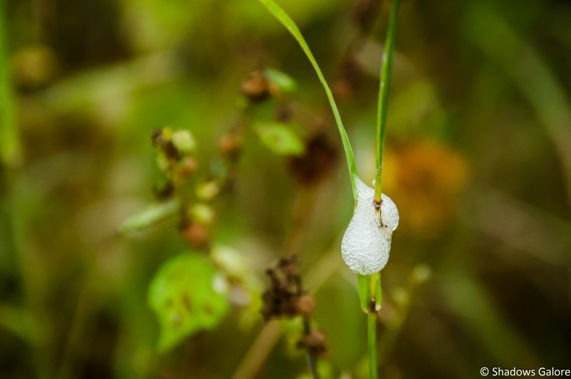 Signs of a Spittle bug which often looks like a spit 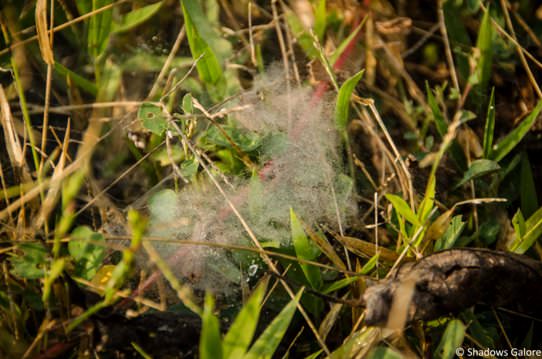 Nest of a spider. When a prey sits on it, the spider gets to know with the vibrations and comes up for a kill

The buffer zone is not frequented by tigers, but leopards and sloth bear do not have any qualms crossing over and check out the area. There were some traces of kills made in past – bones of a cow, bleached white in the hot sun, and antlers of a small unfortunate deer which paid the price of being placed lower in the food chain. 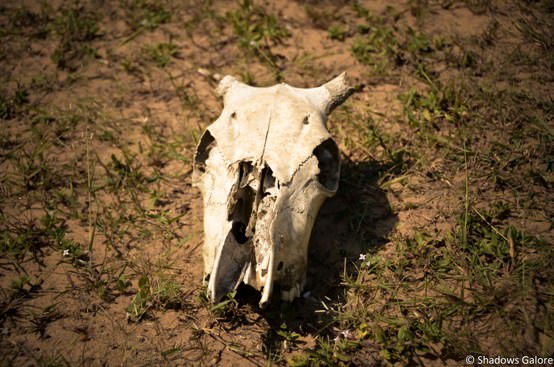 An old kill, possible victim for a leopard

Though we did not come across leopards or bears during the walk, we did see the pug-marks of a leopard on our way. It must have passed through the mud after the rains brought by cyclone Hudhud a few days back. It is a strangely thrilling sensation to make such discoveries.

Marks of a Leopard 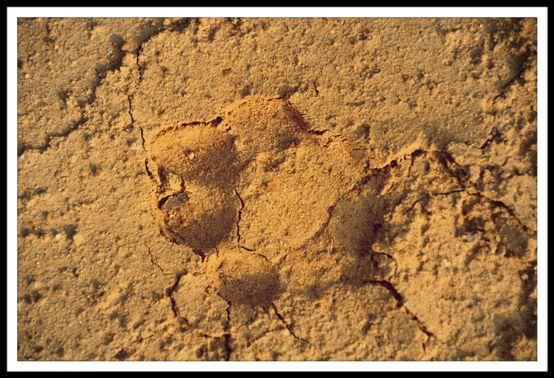 The  pug-marks of a leopard may look the same as that of a dog to untrained eyes, however there is a way to find the difference – the marks of the dog will have claws markings in the front and the pad smaller and deeper. However, the leopard keeps its claws to itself and the markings are distinctly round, with the pad bigger, rounder and shallower. The mark of a tiger is almost the same as that of a leopard, only much bigger in size.

As the sun rose in the sky, it got progressively warmer and the birds of returned to shaded havens. We decided to go back to the lodge and save the energy for the rest of the day. Somehow, we were assured now that it was a remarkable day ahead of us.. 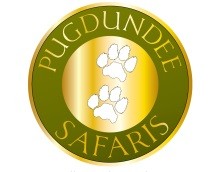