After starting the day at Goa Gajah, we started for our next destination – the Tirta Empul Temple or the Holy Spring Temple as it is often referred as. Built in 962 AD over a natural spring, this temple is dedicated to Lord Indra, the Hindu God of rain. Agni, Varuna and Indra were ancient gods in India who somehow lost their position to Vishnu and Shiva when the civilization flipped a page in its long course of history. It was in fact the only temple of Indra which we had ever seen. 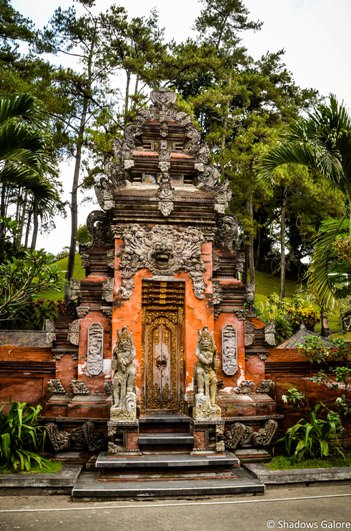 The Tirta Empul Temple holds a very prominent place in the lives of the Balinese. The water from its springs are believed to cure diseases and deliver men and women from the sins of this life. Important rituals related to birth and death are observed in its ponds, giving it the name – Ganges of Bali.

The Legend of Tirta Empula

According to scriptures, Bedahulu, also known as Mayadanawa, was a very powerful king who has mystical powers. He became arrogant and proclaimed himself a God, forbidding worship of any other Gods. To teach him a lesson, Indra – the king of heaven arrived with his army and a fierce battle started near the site of the present temple. It is said that the demon king created a pond filled with poisoned water. When Indra’s soldiers drank this water, they immediately fell dead. Seeing this, Indra struck into the earth with his weapon and the water which came out of the spring brought life back into the bodies of his soldiers. It therefore, started to be called Tirta Amertha Pengentas Urip (holy water that revives the spirits) 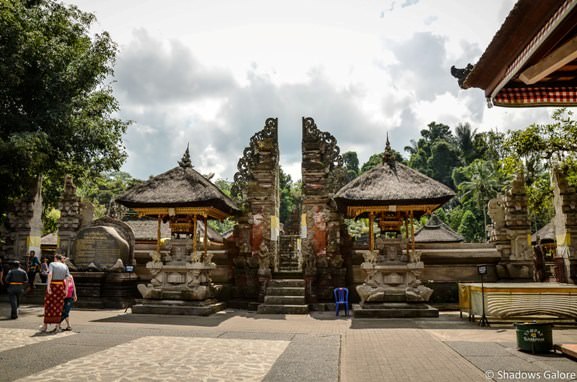 Entrance of the temple with its wing-shaped gates

As we entered the temple, there were two sets of ponds with a total of 12 springs. There was a lot of activity around the pools, with the pious taking bath, tourists like us taking photographs, some meditating besides the pool while happy children splashed in the water.

This kid was having fun swimming in the holy waters

The worshippers first made an offering in the temple and then stood under the fountains. Wayn informed us that the water of this fountain had medicinal properties and that it could cure many diseases of skin. However he cautioned that the last two fountains were to be used for death related ceremony. Poor tourists were unaware of this and were taking bath under each fountain religiously.

The temple, a little overran by tourists … 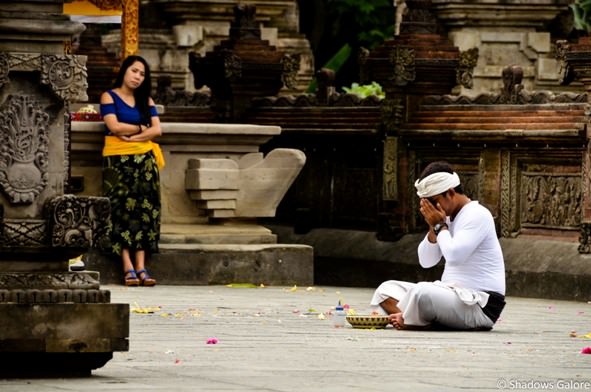 The main temple lies besides the pools, a spacious quiet type of place, a heaven of tranquillity. It was basically a complex dotted by many small temples. A part of it was out of bound for tourists, earmarked – “for mediation only”. That is actually a good thing that they do not allow worshippers to be disturbed by clicking cameras and chattering tourists. 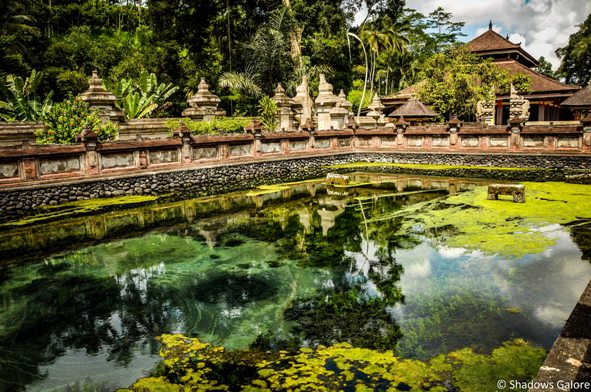 Source of the Holy Water

We even saw the source of the 12 streams, a turquoise-green pond bubbling with volcanic water. So this was the pond created by Lord Indra ! The bubbling water has minerals which give the wading ponds their purifying touch. We spend some time there marvelling at the beauty of the place, and clicked a lot of photographs. 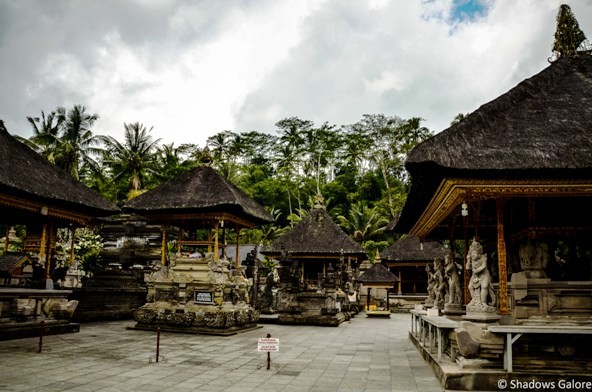 On higher grounds besides the temple is a surprisingly contemporary property, which served as the summer palace of the Indonesian President Sukarno.  Known as the Tampaksiring Palace, this beautiful place has hosted important guests like Obama. Clearly off limit for commoners like us..

It was a cloudy day 🙂

A temple guard frozen in time ..

Strange merchandise being sold outside the temple

Ekta having a serious discussion with a temple guard .. 😀

So that was the Tirta Empul Temple and President’s Palace for us. We came through a chaotic market selling strange merchandise (like life-size wooden phallus) feeling a little purified and much awed. The day certainly had a lot of excitement in store for us…