The city of Seville, located in the southern region of Andalusia, is known for its breathtaking architectural landmarks and its traditional food. A visit to Seville is a visit to the heart of traditional Spain.

Seville, located on the banks of the Guadalquivir river, is located more than 100km from the sea. This makes the city stuffy during summer. The optimal seasons to visit the city are autumn and winter.

How to get there?

Seville has a large international airport. The city is connected to Barcelona, Malaga and Madrid by the high speed AVE trains.

Seville is a city that can be explored on foot. If you want to stay near the main landmarks, hurry and book a hotel in the Barrio de Santa Cruz in advance. Another option is the Triana neighbourhood, located on the other side of the Guadalquivir river. Here you will find many hostels for those on a budget and boutique hotels for those who want to stay in a traditional palace transformed into a designer hotel. The advantage of this neighbourhood is its location: most of the famous flamenco and tapas bars are located in this district. 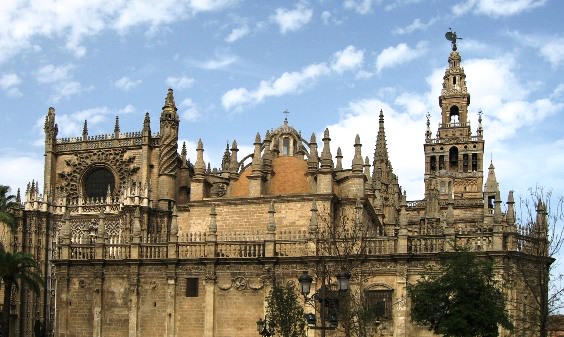 There are many cultural and historical landmarks in this city. Do not miss the city’s cathedral, located in the Barrio de Santa Cruz, located in the city center. The cathedral’s bell tower is the famous Giralda, one of the city’s symbols. This bell tower used to be a minaret that belonged to the mosque, and the cathedral was built on the ruins of that mosque. After exploring the interior of the cathedral, climb up to the top of the Giralda, from where you will be able to enjoy views towards the Guadalquivir river and the rest of the city. The interior of the cathedral has many chapels decorated with art and carved statues. Many of these chapels were actually transformed into galleries where you find many relics. The Retablo Mayor is the most famous piece inside the cathedral, a gilded altar of carved wood decorated with statues. 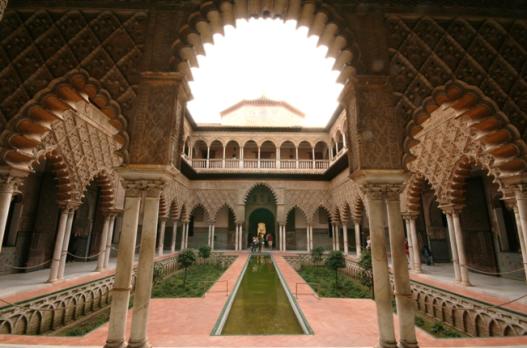 Next to the cathedral you will find the Alcazar. This building is another building you must not miss during your trip to Seville. The Moorish fortress, now a palace, has Mudejar patios, Gothic halls and halls decorated with pieces of art from the Renaissance. Explore the gardens and courtyards, which are decorated with carved fountains and statues.

If you want to relax head towards the María Luisa Park. The park used to be the gardens of a nearby palace. Later on the park was transformed into the site where a large expo took place. It was then that the Plaza de España, one of the city’s most visited squares, was built. Many of the pink, stone buildings are now art and history museums. The square itself is a semicircular expanse with an artificial river. Here you will be able to rent a rowing boat and explore the park and the square from the water. The colourful, tiled niches that line the square are one of the square’s main attractions. Each niche represents a Spanish province. Each niche has a tiled bench and a mural representing typical landmarks and products from each region.

Karthik has been traveling around solo since he completed his M.B.A in 2012. He is passionate about photography, trying out new food and exploring places alone. He writes his experiences on two blogs Romancing The Planet and The Travelling Indian.