Nalanda – The Lost Beacon of Knowledge 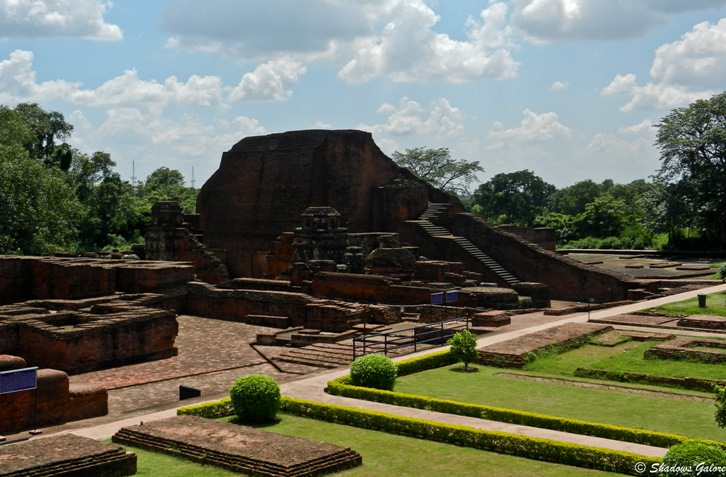 More than 1000 years ago, there was a University like no where else in the world. A flourishing center of knowledge, this university called Nalanda attracted students from as far as Persia, Turkey, Greece, China and Tibet and accommodated up to 10,000 students and 2,000 teachers and a library unmatched in the world. Various subjects like theology, grammar, logic, astronomy, metaphysics, medicine and philosophy were taught here. Such were its standards that the doorkeeper used to conduct the admission interview of the candidates. Foreign travelers wrote accounts in its glory, the life led by the monks here was regarded as the ideal to be followed by Buddhist monks everywhere. Loved by Buddha and Mahavira; nourished by Ashoka, Guptas, Palas, Kanishka and Harshavardhan, Nalanda was the pride of India.

Then in 1193 AD, came a marauding army of Turks under Bakthiyar Khilji. The savages ransacked and looted Nalanda. Thousands of monks were burnt alive and thousands more were beheaded. The great Library was put on fire and its massive collection of books and manuscripts continue to burn for three months. The University of Nalanda went into oblivion as did the spirit of India and was to remain buried, not to appear again till its rediscovery in the 19th century… 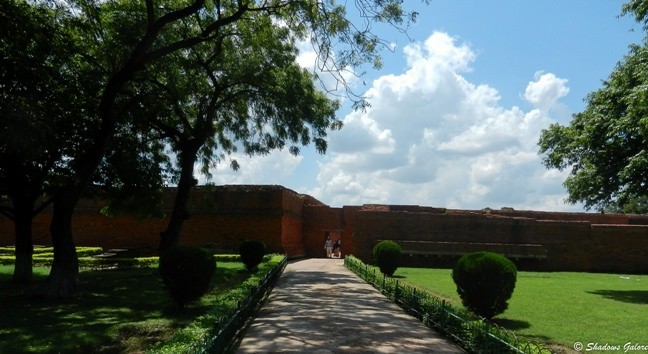 The day was well into afternoon by the time we reached Nalanda. The sun was at its scorching peak and the weather was unbearably hot. A tourist guide standing nearby convinced us that hiring him was a good idea, as without him it will all be just broken bricks there. So we took him along, bought the tickets and went inside.

Nalanda was one of the world’s first residential university and was so huge that the current excavated area of 14 hectares is just about 10% of the original total area of the university. The main gateway with its mighty towers, which was glorified in the writings of Xuanzang was never found and the walls have been cut to create a gate. 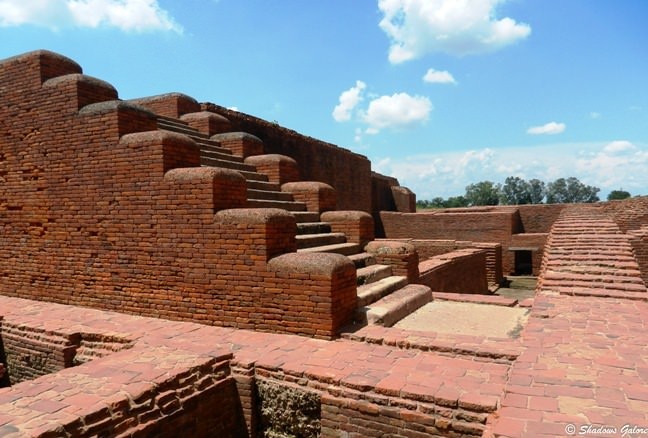 Near the student hostels

As we crossed the thick walls, we came to the courtyard. There were 9 hostels with rows of double storied rooms for the students. Each room was double occupancy,with beds made of bricks and shelves for keeping books. For more senior scholars, there were single occupancy rooms. Each hostel had a central courtyard which served as the meditation hall as well as community kitchen, each with its own water source. On one of such courtyards, the guide showed us the design of a bow, the insignia of the Guptas. It felt weird, the ruins of a glorious past, with a forgettable present and an uncertain future. There are plans to revive the Nalanda University, but will it ever reach its former glory ? 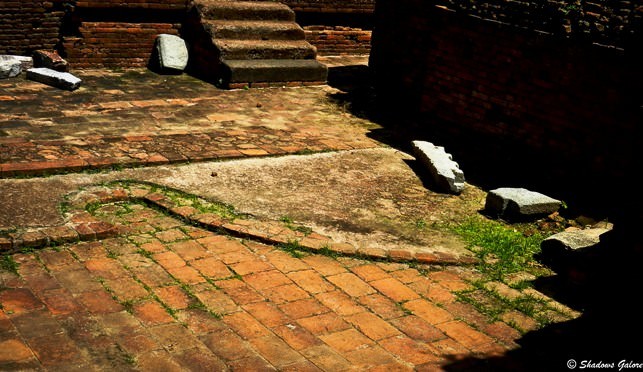 Bow, the royal insignia of the Guptas 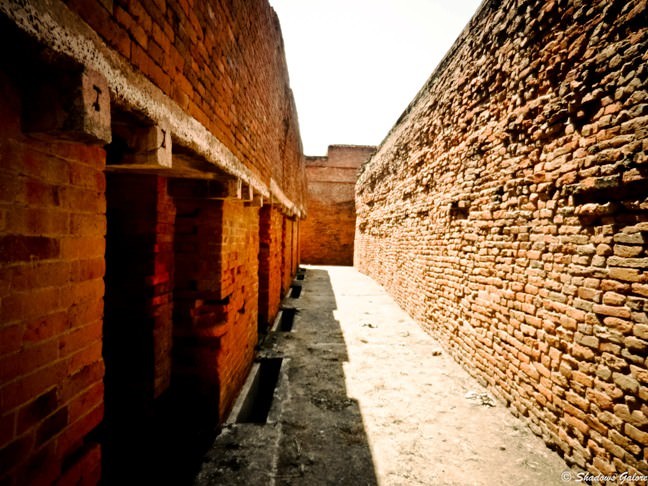 The best teachers of their times had once passed through these corridors ..

On a side, there were the residential staff quarters, to accommodate 1000 scholar teachers. Each room would be single occupancy, and had an anteroom for meditation. There were baths and covered drainage system to carry the refuge. Since the area is as flat as the palm of a hand, the drainage was built in such a way that the gradient would slowly increase taking the refuge to the dumps. Almost everything was made of bricks, while the original brick masonry was so precise that there would not be a margin of error of even a millimeter, the layer built by the British and later, the ASI had already started tapering off. In the words of the guide, “While the old is still gold, the new crumbles down”. 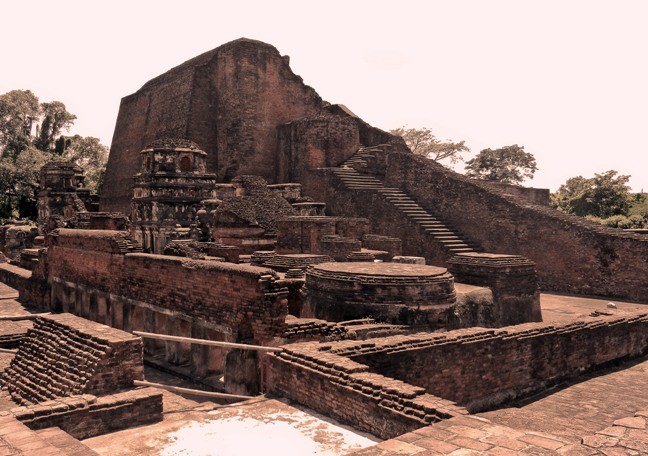 The Giant Stupa – Up Close

The most famous part of Nalanda is its giant stupa. Built in seven successive rounds, this stupa had a flight of stairs leading to a terrace and apparently held a huge image of Buddha. Before the excavations began, it had been totally covered by earth and resembled a small hillock. Till a few years back, tourists were allowed to climb all the way to the top but in their usual callousness, they started causing damage to the structure, and it has hence been made off limits to people. Surrounding the main stupa are several smaller stupas, which contain the remains of the monks and scholars who once resided in the university. 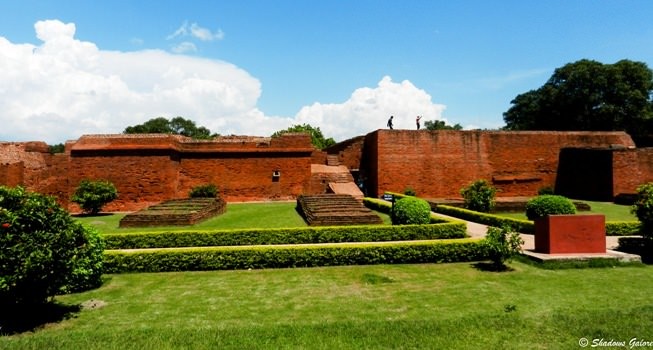 The final view of Nalanda ..

While we were coming back, the guide showed us the remains of the colossal library of Nalanda, which at one time would have given a tough competition to the great libraries like the one at Alexandria. He said that the black marks from the fire could still be seen on its walls. It made me wonder how could one have the heart to destroy this priceless treasure of human knowledge. Nalanda today stands testimony to the death and destruction religious fanaticism has brought on mankind, perhaps the greatest crime ever committed in the name of Islam…