It was another beautiful morning in Udaipur and I saw the sun rising after a very long time. It was a gorgeous sight and we spent a couple of hours doing nothing but ogling at the beauty of Udaipur from our window. However, we had to leave the city today and go towards Jodhpur, via Kumbhalgarh. Being a full day journey, it was necessary that we started early. So after a quick breakfast, we packed our bags and bid adieu to Udaipur. 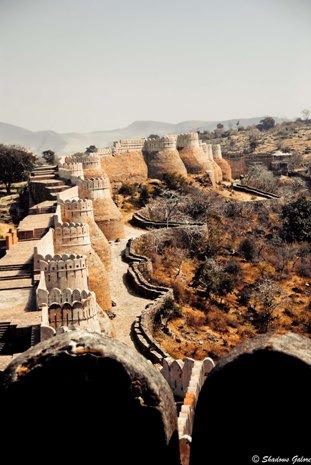 Jodhpur is a little more than 250 km from Udaipur and according to google, the journey can be covered in 4 hours and 15 minutes. However, there is no direct train route between the two cities and one needs to go all the way back to Ajmer to catch a train to Jodhpur. Also, going straight to Jodhpur will be such a shame when one has wonderful stopovers like Chittorgarh, Haldighati, Kumbhaklgarh and Ranakpur on the way. So a train and bus journey ruled out thus, the only option we had been to hire a cab, which we did. Since we could not choose both Chittor and Kumbhalgarh on a single day, we chose the latter (not because Chittorgarh is insignificant, but because it requires special attention reserved for our next trip to Rajasthan, along with Haldighati) and Ranakpur.

Our way through Mewar took us through hilly terrain, long-deserted strecthes of land and ravines very close to Haldighati. It was obvious why Haldighati was named so, the soil in this area was of a distinct yellowish shade. The landscape was mostly sparsely populated and we were slowly getting transported to a different era. Barring a few vehicles and electric poles, this was certainly not the 21th century. Actually here lies the real beauty of Rajasthan, this place makes time travel so easy.

It was sometime by noon when we reached Kumbhalgarh. The mighty ramparts of the fort, unique in their design and appearance immediately woke us from the slumber we had fallen into and we were hurriedly started our expedition.

Built by Rana Kumbha in the 15th century Kumbhalgarh is the most important fort in Mewar after the Chittorgarh fort. Located at a height of 1100 m above sea level and surrounded by a difficult forest terrain, this fort was used as a refuge by the royals of Mewar in times of danger. The walls of this fort extend to a whopping 36 km, second longest only to the Great Wall of China. The ramparts are so thick at places that 8 horses could ride abreast. The fort is hidden so well within the mountains that one cannot notice its ramparts unless he is just 50 m away from the fort; however from inside the fort one can get a panoramic view of the countryside for miles.  These qualities made Kumbhalgarh was so impregnable that in the bloody swings of Mewar’s fate, it was taken just once; and it took the combined force of Mughals, Amber, Marwar and Gujarat to achieve that feat. If all this is not enough, Kumbhalgarh happens to be the birthplace of Rana Pratap, something which automatically makes it a pilgrimage of a self-respecting Indian worth his salt. 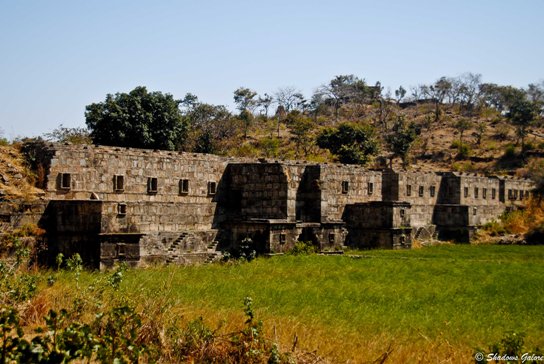 The Dam at Kumbhalgarh in the middle of green fields

After taking the tickets (Rs 5 each), we entered the fort through Hanuman Pol, its main gate. There is an interesting story about Hanuman Pol, it is said that Rana Kumbha was being frustrated in his attempts to build the fort. He was then told by a sage that it would need human sacrifice to build the fort, and that the gate should be build at the place where the head of the sacrificed man fell. After a lot of search, one soldier finally volunteered to be decapitated.  Hanuman Pol was erected where the head of the soldier fell and a shrine was erected by Rana in his memory. 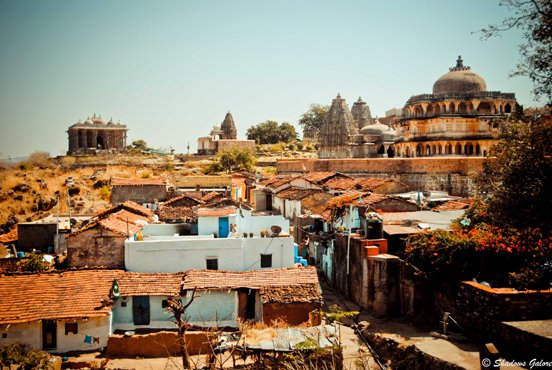 The small village inside the fort. An eyesore for some and for some others, a rare view in the rural life of Rajasthan

As one enters the gate, he finds himself at a crossroads of the sort. On the left goes a way uphill to a palace called Badal Mahal, on the right can be seen a number of temples along the walls. Straight is a way which goes steeply downhill without much clarity on where it goes. In a rare flash of brilliance, we decided to take this path and see what lay ahead. This path went through a small village of some 300 people who have settled inside the fort quite recently. So down the slopes we walked and walked in the hot sun till we reached a paddy field and a wall like structure which we came to know only later was a dam. There were many paths going in many directions from there but all going upwards, and in the hot we were most unwilling to go here and there. So we walked back to the main gate once again, this time a difficult uphill task and took a good 15 minutes. 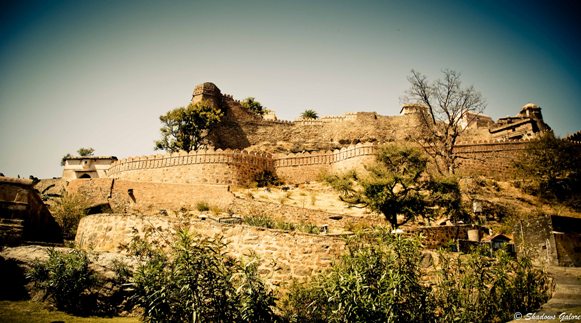 Badal Mahal, as it looked from below

Once at the gate, we turned towards the right and started going up towards Badal Mahal. There was a Ganesh temple at the bottom but we thought of going there later. While not as steep as before, this was quite strenuous itself. We entered a huge gate studded with nasty spikes and reached a point from where we could see the round ramparts of Kumbhalgarh below. It was an awesome site and while Ekta waited to catch her breath, I climbed atop a great vantage point and took a good amount of photographs (the ramparts at the top). Post this, we resumed climbing till we reached another gate and the ‘Topkhana’. 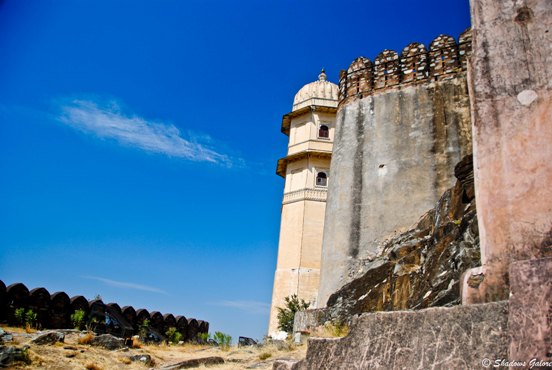 This place was marked the birth place of Rana Pratap 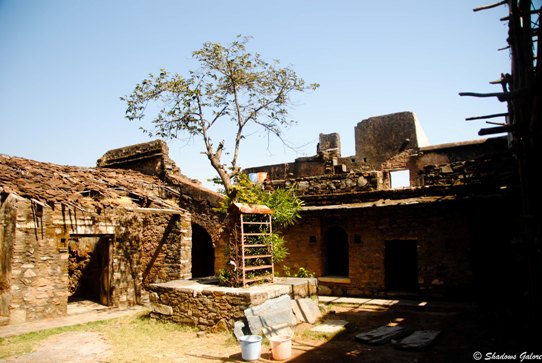 Kumbha Palace, or whatever remains of it

Finally we crossed the last gate and reached the royal enclosure. On our right was Kumbha Mahal, the palace of Rana Kumbha, a two-storied building with a set of rooms and a gallery. The building was not in a very good condition and was under renovation. One our left was a sign board marking the place where Rana Pratap was born. This was known as Jhalia ka Malia (or the Palace of Queen Jhali). We went towards the Kumbha palace, a little nearby was a zig zag mesh of corridors from another era. An old banyan tree, barren corridors and empty chambers. It gave an eerie feeling thinking what these corridors had seen in the last 700 years. After looking around for sometime, we went towards the Badal Mahal (Cloud Palace). 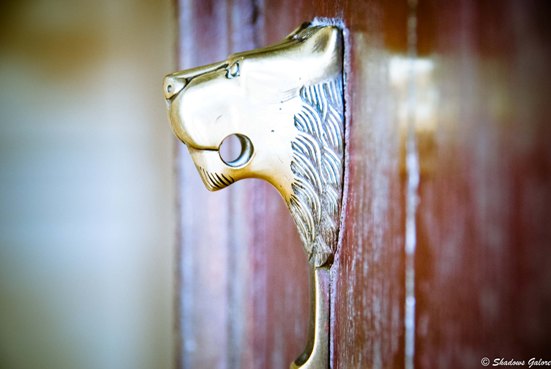 Lion .. a doorknob at the Ladies quarters 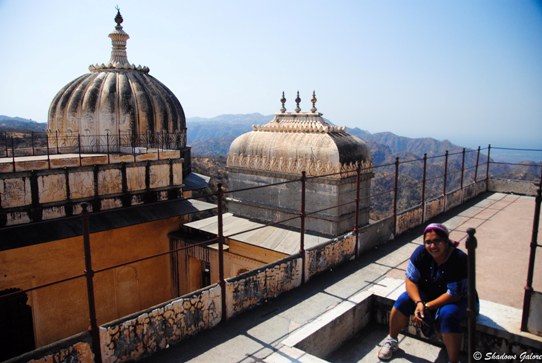 Ekta at the terrace of the Badal Mahal

Built in the 19th century and one of the most recent structures of Kumbhalgarh, Badal Palace is a plain yet beautiful building. It has two separate parts, the women’s and the men’s quarters, both connected by a set of corridors. The rooms were decorated with beautiful paintings, the bases usually depicting elephants in peacetime and war. The women’s quarters had windows with intricate jaalis through which the ladies could look what went on around. From the upper floor, one could get a 360 degree view of the countryside. As there were very few people around, this place was very quiet and gave an unreal somber feeling, something which cannot be described easily. . 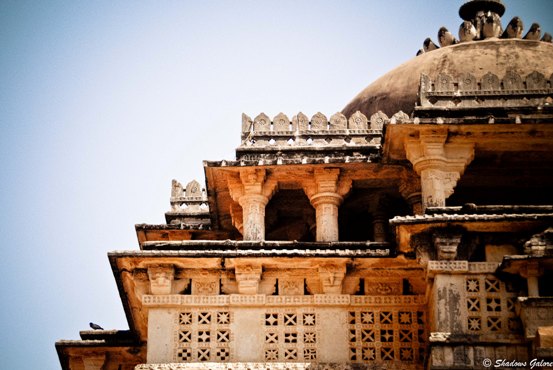 We spend a lot of time roaming around in this deserted palace. It must have been a couple of hours later when we went back to Hanuman Pole. By this time our driver was warning us that we had a long distance to cover and will get delayed, so we asked for another 15 minutes and went to see the temples. The most remarkable of the temples was the Vedi Temple, a Jain temple built by Rana Kumbha. As we climbed the wall of the fort, we could see a lot of temple at a distance, but we were too tired and dehydrated to walk any more. The shops inside the fort were selling eatables and cold drinks at double their price very shamelessly talk about laws in our great nation. However, Pepsi had never tasted so amrit like !

Finally, it was time to bid goodbye to the majestic Kumbhalgarh, so we got into the car and started for our next destination – Ranakpur…