Colorful Rajasthan – The Forts of Jaipur

The second day started early, even though we were most unwilling to get out from our warm comfortable beds to a cold and merciless world. After a long Lucknowi pahle aap- pahle aap, Ekta got up first and got ready. I followed suit, there was no question of taking bath so in a short time we were fed and  ready to explore Jaipur. Since we had just a day in Jaipur, we decided not to go the Hampi way of exploring things on our own and instead booked a cab service which promised to show us the whole city in a day. After a brief stop at the Birla Temple, we were off to see the famous forts of Jaipur. 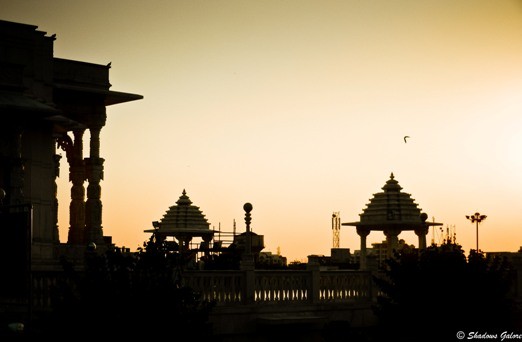 The first one was the famous Amer Fort, built by the kings of Jaipur in the 18th century. The way to Amer Fort took us through the Pink city, lines of beautiful  and old (sometimes not so ) buildings lined up stacked up shoulder to shoulder, all colored in pink. Story goes that the city was colored pink to welcome the arrival of the British Monarch in 1911 and since has acquired a heritage status for this part of the city.

The Courtyard of the Amber Fort

The Amber (pronounced as Amer) Fort is build over a small hillock in front of a beautiful lake and garden and is approachable by a motorable road. One can also take an elephant ride up the palace but there is usually a long queue for it, we decided to give it a miss in favor of time and went up by our car till the car parking, post which there was a small walk to the fort.

One enters the court to a huge courtyard, on one side of which are rows of elephants with bright red seats, turbaned mahouts and wonderstruck tourists atop them. The courtyard was pretty crowded as Amer happens to the most glamorous of the triad (Jaigarh and Nahargarh being the other two). One has to take an immediate left from the entrance to find the Ticket counter, Rs 25 for Indians and Rs 200 for foreigners, camera free. We decided to take a guide here and hired an old gentleman to show us around. This soft spoken and ever smiling guide of ours was a pleasure to be with and was quite patient with our wandering off from time to time to take photographs. 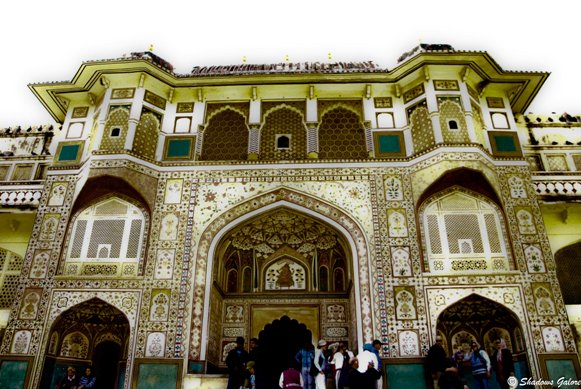 We started our tour of Amber as awestruck as most other tourists, for the display of royalty was too much for our middle class eyes. The first stop was Ganesh Pole, a richly carved building with gold paint which shined even after enduring centuries of vagaries of nature and man. There were long corridors, winding galleries and jharokhas so beautifully carved that they would make modern day architects quit their jobs and go to Himalayas. There was a royal hammam (bathrooms) made of white marble and equipped with provision for hot and cold water. There was a machine made of wood which ran on bull-power and would draw water from lower quarters to the fountains and gardens of the palaces inside the fort. 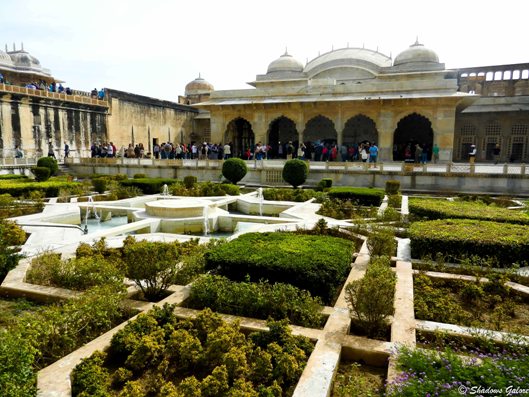 The Palace inside the Amber Fort. The garden has geometrical patterns which are the same as those etched on the doors of this palace 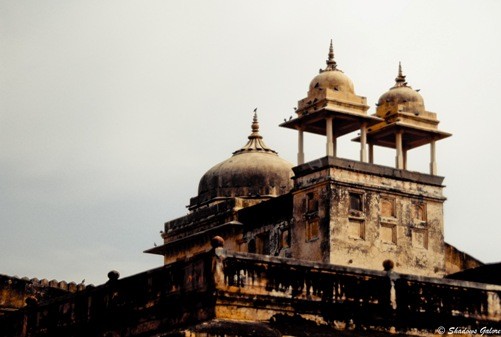 The Women’s quarter with 12 different royal houses for the 12 queens of the king, our guide was very enthusiastic in showing where Hritik had his food cooked by Aishwarya in Jodha-Akbar. We were also shown an underground tunnel which went up to Jaigarh where the garrison of the Jaipur state stayed, making the provision for the king to make an escape if Amer was surrounded by the enemy. 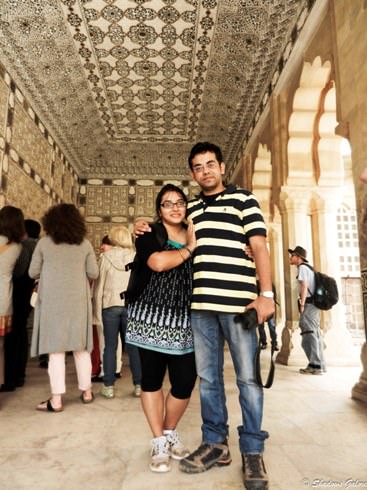 At the Sheesh Mahal

One building of Amber which deserved special mention was the Sheesh Mahal or the Glass Palace. The palace was build by Raja Jaisingh and has an unearthly embroidery of marble, precious stones and glass. If one lighted an electric torch inside the palace, it would feel as if stars were dancing during the day time. Guides used to show this in the past, till authorities had to prohibit entrance inside the palace to ward off rogue tourists who would steal the glass pieces from the wall !

Our next destination after the Amer Fort was the Jaigarh Fort. As mentioned earlier, Jaigarh used to be the fort in which the garrison used to be kept, however it was not known to us that the treasury of Jaipur was also situated inside the Jaigarh Fort. Made of Pink stones, it is relatively smaller than Amer and more plain in nature. However, the most famous object of Jaigarh which we saw is the Jaivaan cannon, the largest cannon that exists in the world. The barrel of the cannon weighs 50 tons and the wheels have gigantic measurements. It could take 100 kg of gunpowder at a time. According to legends, this cannon was fired just once, during its testing. The gunpowder put in the cannon was only a fraction of the maximum capacity, yet the cannonball as far as a whopping 35 km from the fort, in what is another district. The place where the cannon ball fell is now a pond! 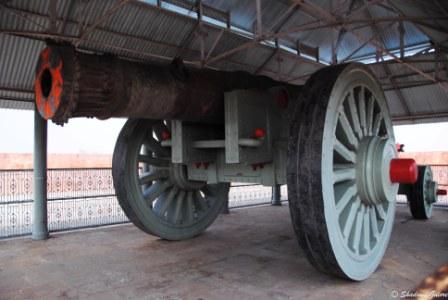 Jaivana Cannon, the largest wheeled cannon ever made

As the guide told us about the treasury, in 1976, Indira Gandhi seized the treasury of Jaipur kept in the Jaigarh Fort, the king and the queen were held under house arrest and the Delhi Jaipur Highway was closed down for four days. I had to google it to verify. 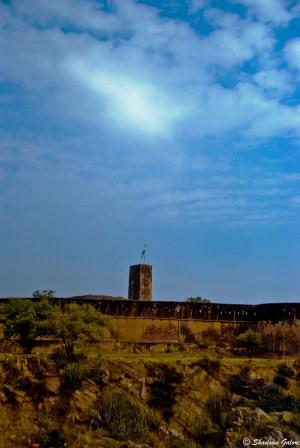 The Jaigarh Fort from a distance

There is a underground water tank inside the Jaigarh fort which rests on 85 pillars and can support 10000 men for 2 years, when completely filled. Built centuries ago, it is still used to supply water. Saris dyed by multani mitti are made from the water of this reservoir giving them a special ivory color. We were coaxed into buying one of those sarees and I was pretty satisfied with the bargain.

Built as a Summer retreat and a Hunting palace in 1734, Nahargarh Fort (meaning the abode of tigers) is the highest of the three forts of Jaipur. We had spent a lot of time in Jaigarh and were running a little late so had to hurry up a little at Nahargarh. The fort houses the beautiful Madhavendra Palace, a beautiful abode for the royalty, complete with residences for the queens and the king. The specialty of this palace is its intricately carved doors and windows and long, gracious corridors. This fort gives a beautiful view of the Pink City of Jaipur below. 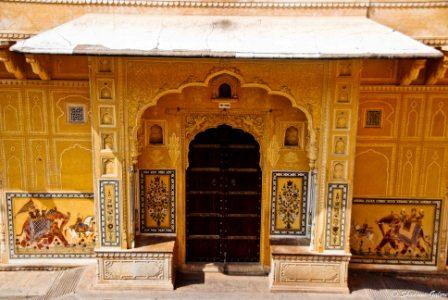 Beautiful Fresco on a Door at Madhavendra Palace

We spent some good time clicking photographs and admiring the beauty of Nahargarh before we left for our next set of destinations -the Pink City.

For more better quality photographs on our Jaipur trip, please see Jaipur, a set on Flickr.