“I don’t like the perceptions that people have when they speak about East Germany“, remarked Pierre in whose car I was traveling from Stuttgart to the East German city of Leipzig. In stark contrast to the rapid strides that its neighbor West Germany made between the second world war and the fall of the Berlin wall, East Germany was subject to USSR style rule that left its citizenry economically disadvantaged. Perhaps Pierre rightly assumed that people recall this difficult past when they differentiate between the east and the west. He was right, a city carries its past with it.

It was a clear winter evening when we set out to drive. The temperature was hovering between 0 and 5 degrees Celsius and we were cruising along at ~130 kilometers per hour on the autobahn. For a Friday evening, surprisingly, there was little traffic. Pierre was young, impatient and brimming with enthusiasm when he heard that I was going to spend an entire day in Leipzig. In an excited tone, he filled me in with sights to see.  Having spent his university days in Leipzig, he was attached to the city and rated it better than Stuttgart. He hoped that his girlfriend would soon be able to get a job and move together with him in Stuttgart.

The advantage of traveling by car through options like mitfahr is that one gets to meet people from different backgrounds.  Conversations sometimes get struck, but mostly they flow from one topic to the other with a rhythm of their own and in such times, I get a glimpse into the lives of these men and women as they share stories from their past, their aspirations, dreams and plans for the future. Sometimes we end up discussing politics, cultural differences between India and Germany, arranged marriage, relationships, euro crisis and what not! With Pierre, through the course of four and a half hours, I ended up bouncing off my views on all these and more. It was quite a memorable journey. 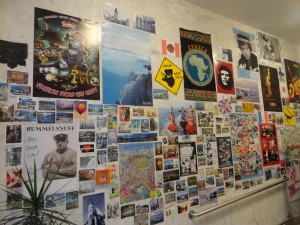 Reaching Leipzig, I found my way to the Sleepy Lion hostel after grabbing a quick snack for dinner at Burger King. Somehow I had imagined the hostel compound to sport a picture of a mighty beast sleeping in peace…a refurbished decor, spacious dorms and an impressive collection of pictures adorning the wall opposite the reception, this hostel experience is certainly worth a mention here. Early morning on Saturday,  I set out to explore Leipzig. I had underestimated the winter chillness and it stung me quite harshly. I roamed the area around St. Thomas Church and could catch the first few shops of the Christmas market opening before letting myself into the church.

To know that the earth you are walking on was once walked by great men in the past can be quite unnerving. I’d not exaggerate if I say that I experienced something similar. The first thing that struck me on entering the church was the music from a choir. I soon learnt that this Lutheran church is famous for one of the oldest and very famous boys choirs in Germany. The great German composer Sebastian Bach instructed the students of the church choir when he made Leipzig his home in the year 1723. Seeing the text of one of Bach’s compositions, “Es ist genug“, I left the church with a heavy heart. 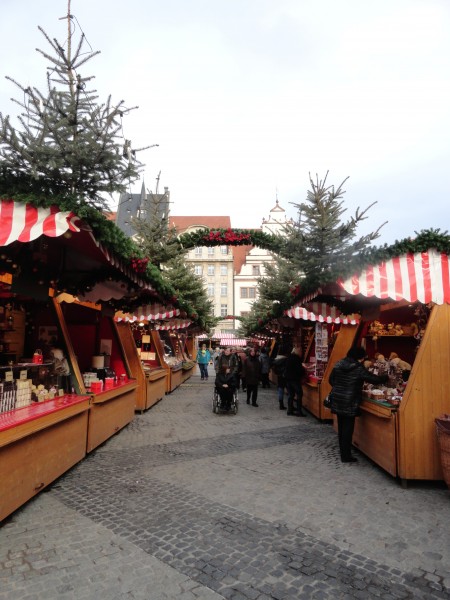 Stepping out, I found that the shops in the Christmas market were beginning to attract crowds. Dating back to the 15th century, the Christmas markets are believed to have originated first in the German speaking part of Europe. I could not wait to taste the Glühwein, a popular highlight of the Christmas market experience in Germany. There were so many cute things on sale at the many shops that one would not get bored, no matter how much time one spends here. One could, in all leisure look at the various items on offer and almost always expect to be greeted by a sweet smile from the stall owners.

After spending some time in the market, I decided to soak in some history at the Museum for Contemporary History. There was an exhibition of photos by Thomas Hoepkar taken during the GDR era. Nothing like images of bygone times to bring forth the right gravity of the situation. Every image encapsulated a story and not all stories left a pleasant aftertaste. 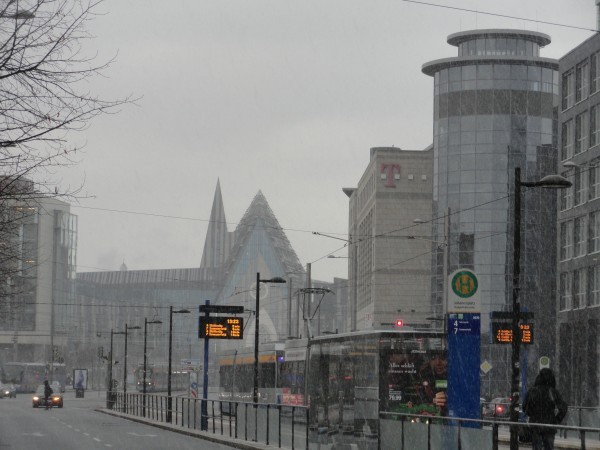 It was snowing when I made my way to the Grassi museum. As the city got draped in white, its streets took on a rare beauty. With so many imposing buildings around me, I imagined myself walking the streets of a medieval city in the 18th century. In such a daydreaming mode, I would have gladly shook hands with Bach himself without an iota of surprise. The Grassi museum is 3 museums in one and I spent the better part of the day inside its premises. 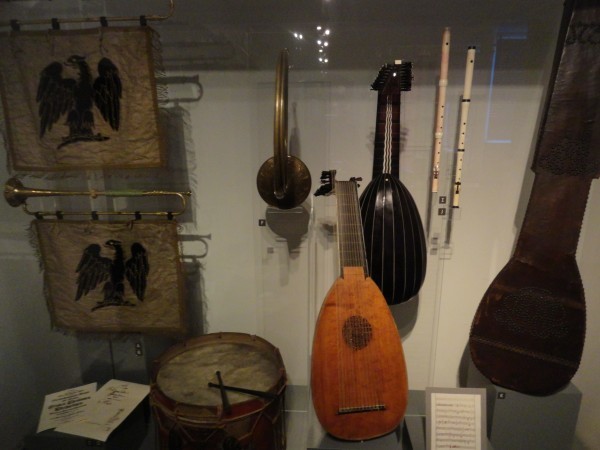 An exhibit at the museum for musical instruments, Grassi Museum

The weather had worsened when I came out of the museum complex. I headed back to the market complex and to my surprise, the crowds had only increased. People of all ages were milling about the shops. I headed straight to Bagel Brothers. When I made my way back to the Sleepy Lion hostel to call it a day, I was not sure whether Leipzig was the new Berlin. However I was convinced that the city had worked its charm. In my sleep, images of the day drifted back and forth arranging themselves to form a beautiful picture.

On Sunday morning, I boarded a train to Dresden, home to Germany’s oldest Christmas markets. I was elated to be provided a map detailing locations of as many as 11 Christmas markets in the city at the railway station’s tourist information center. However, as I soon found out, I became impressed by the city’s architecture as much as its markets. 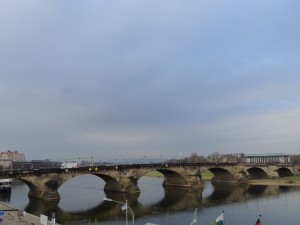 The area close to the Augustusbrücke is a traveler’s delight with so many architectural marvels all around.  The royal palace, Zwinger, opera house and Frauenkirche are all within walkable distance. Despite the cold, I could not help but savor the sights. I must have crossed the stretch connecting the opera house and the royal palace at least twice or  even thrice before I realized what I was doing. To my layman’s eye, the structures looked regal and imposing and without exception, each building appeared to wear a proud countenance notwithstanding its age.  If I had had more time, I would have liked to check out some of the museum exhibitions. 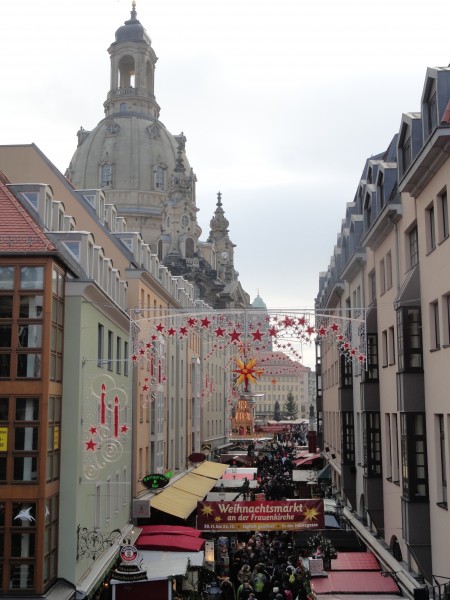 The Christmas market in Dresden should be seen to be experienced for no words can ever do justice to a mile long layout of shops connecting one small market with the next. Starting near the main rail station with the market on Prager Strasse, I could walk until the market at the Frauenkirche crossing the one at the Altmarkt. Candles, houses, toys, woolen wear, handicrafts, pearls, cakes, wurst, chocolates,wine and what not! I had to will myself not to shop beyond a certain point. Pure indulgence it was!

As I made my way back to the train station late in the afternoon, I wished I had the company of my friend who would have loved such a carnival atmosphere and whose smile is simply priceless. But life deals its cards in mysterious ways. Even as that thought crossed my mind, I managed a smile. And right in front of me, like an apparition, an image of my friend briefly fluttered before the winter wind carried her on its way…