The Roman Theatre in Verulamium

It is early evening and there is anticipation and excitement in Verulamium. Shops and businesses have already shut down for the day and all the townspeople have only one destination to head towards that day — the theatre in Verulamium, where a renowned theatre group has come all the way from Rome to perform.

There is a carnival like atmosphere outside the theatre. Enterprising hawkers are selling figs, cheese, olives, grapes, and also wine —though wine is not allowed inside the theatre, it does not deter either the sale or purchase of wine. There are also street musicians, jugglers, and beggars moving about in the crowd surging towards the various entrances to the theatre—the nobles and their families enter at the lower levels while the slaves have to ascend steep wooden stairs to be seated at the very top.

Once inside the theatre, the townspeople cannot help, but admire the effect of the evening sunlight on the stage. The golden rays of the sun fall directly on the stage lighting up the tall and graceful, painted sandstone columns, which form the backdrop. The audience also take time sneak glances at what other people are wearing and admire the silks that the richer members of the audience have worn. The musicians are already in the pit fine-tuning their instruments — harp, trumpets, horns, drums, flutes, etc. And from the shadowy movements behind the stage, the performers are ready too. Yes, anticipation is building and the audience can hardly wait for the performance to begin.

They don’t have to wait for long. To the blowing of trumpets and horns and drum rolls and loud cheering, in walks the Governor of the province. After prayers to Bacchus, the Roman God of theatre, and the reigning Emperor of Rome, the performance begins. And what a performance it is of a timeless story of heroes, war, treason, bravery and ultimate tragedy. Sigh!

And this is where a rather loud interruption in the form of a tourist group entering the ruins of the roman theatre of Verulamium brought me back to the present from about 250 AD ! 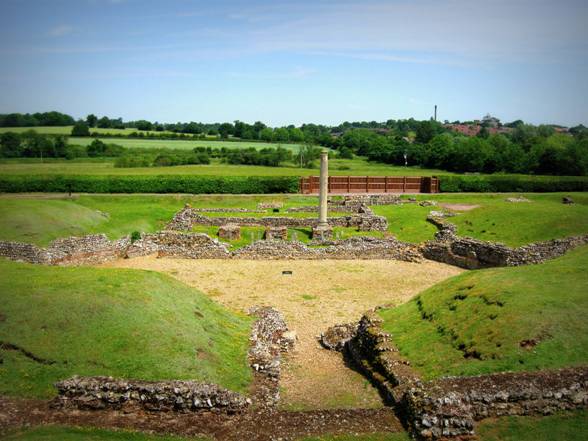 Excavated Remains of the Roman Theatre in Verulamium

It’s a beautiful day and I am on a day trip from London to explore Verulamium (present day St. Albans). The third largest town in Roman Britain after Londinium (London) and Camulodunum (Colchester), Verulamium had a population of about 7,000 at its peak. It had the status of a municipium (municipality) and had a basilica (town hall), a forum (market place) and a theatre. Much of Verulamium remains unexcavated due to the presence of modern constructions as well as being under agricultural land.

The Romans built theatres wherever they went and Britain was no exception. Although several roman towns in Britain were known to have theatres, Verulamium is the only place where remains of a theatre have been found. Excavated in the 1930s, the theatre in Verulamium is like all Roman theatres with a semicircular auditorium facing the stage. 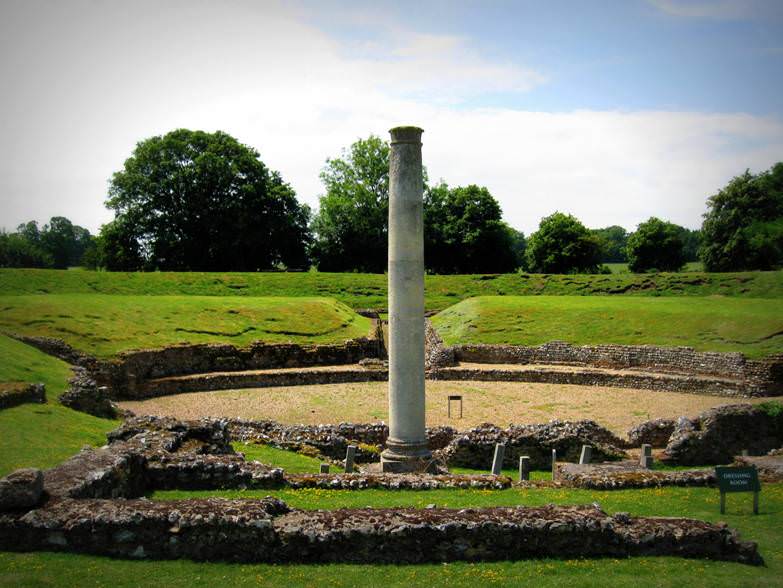 View of the theatre from ‘behind the stage’. In front of the stage is the orchestra pit which would have seated the musicians as well as the nobles and other important dignitaries

The Verulamium Theatre used the natural slope in the area for the auditorium and could seat 7,000 people at a time. The large circular orchestra or a central pit, which was also used to seat important dignitaries during theatrical performances, also doubled up as the arena for public executions. 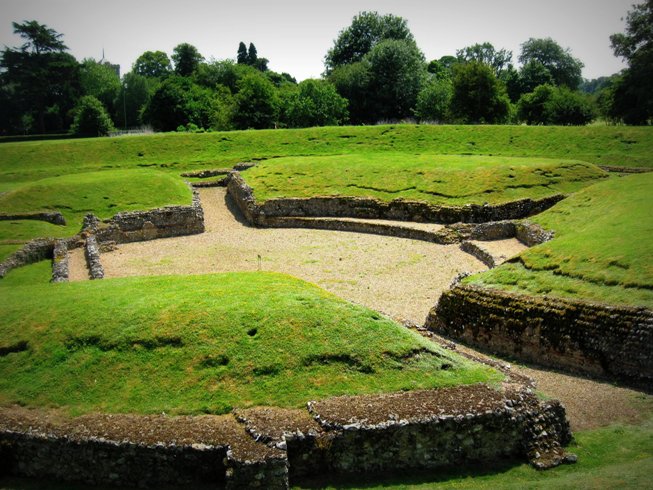 The stage had a roof to support the 3 massive sandstone columns with elaborately carved capitals. The columns formed an impressive backdrop on stage and were probably the first to fall when the theatre fell into ruins over the centuries. During excavation and subsequent restoration, a column was reconstructed to give an idea of what it must have looked like (see the first two photographs). The theatre was bounded on all sides by a flint and mortar wall on all sides. As the illustration below shows, wooden staircases led up the wall to the seats on the top. 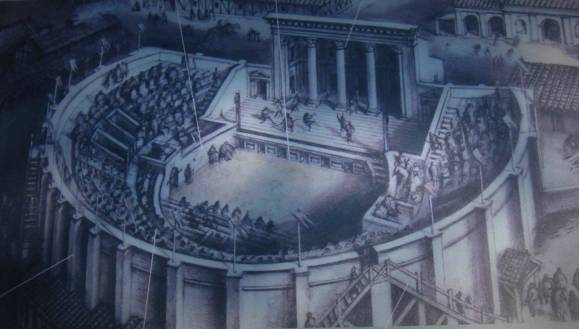 As I sat at the highest point of the theatre and observed the ruins and the land beyond, a group of school children entered the site with their teacher. After an introduction to the Verulamium Theatre by their teacher, they went down into the orchestra pit to do a reading of a script. Though I could hear the kids speaking, not all the words were clear.

As I sat there wondering about the acoustics of an open air theatre at a time when there were no mikes, I overheard the guide of another visiting tour group explain that all the actors at that time used to wear masks and used the mouth slit in the mask to project their voices. Rather like a megaphone. Fascinating, isn’t it? 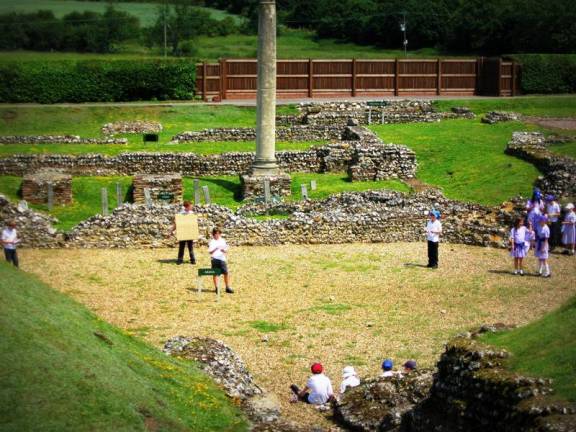 Those who have visited Roman ruins in Turkey or Jordan or Syria will realise that the ruins of the Roman Theatre in Verulamium is not really a great example of Roman theatre architecture. In fact, it probably ranks among the worst examples of Roman theatres in the world. But Verulamium will always remain special for me as remains the first and only example of a Roman Theatre I have seen.

More importantly, it helped me understand where the inspiration for many modern amphitheatres and theatres have come from. Yes, you’re right; they have been inspired by Roman theatre design. The famous Tata Theatre in Mumbai and the open-air amphitheatre at Darpana Academy in Ahmedabad are just two examples.

A Guest Post by Sudha from My Favourite Things

Sudhagee is an armchair and actual traveller, a bookworm, an editor, a communications consultant, a click-happy photographer, a Classical music (Indian, Western and Arabic) lover, a history and mythology enthusiast, among many other interests all of which find their way into her blog: http://thatandthisinmumbai.wordpress.com/