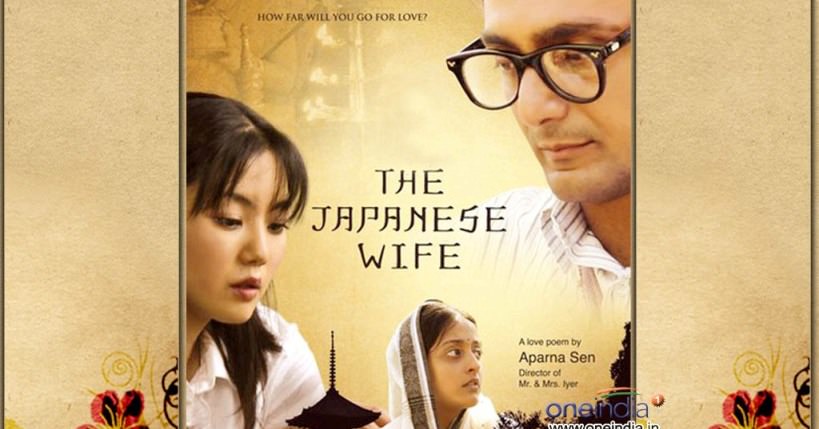 In a remote village of the Sundarbans, Snehomoy develops a strange bond with Miyagi, his pen-pal from Japan. Separated by thousands of miles, the two friends exchange countless letters, exploring each others’ worlds. They even go as far as to take the marital vows of lifelong devotion to each other – by post.  While Miyagi sends a wedding ring to Snehomoy, he sends her vermillion and conch shell bangles. In the world where Snehomoy lives, people are not cynical and take aberrations for granted. So a vernacular Bengali schoolmaster is married to a girl from Japan, whom he has never met and the village readily accepts her as their Boudi from Japan.  While Snehomoy doesn’t have money to travel to Japan to meet his wife, Miyagi is held back by her own compulsions. Spanning two decades, their love transcends the realms of nations and cultures, where marriage means lifelong yearning and wait for each other.

‘The Japanese Wife’ is an unconventional love story by any account, and very remarkable. This film featuring Rahul Bose, Chigusa Takaku, Raima Sen, Moushumi Chatterjee and directed by Aparna Sen was released in 2010, although I got a chance to see it only yesterday. This is one of those rare films which compel me to write about them. On the question of why I consider it rare, when was the last time you watched a love story which made you smile and cry at will?

Rahul Bose in the performance of his life

Aparna Sen surprises by the way she  manages to weave magic on celluloid. There is something very surreal about this film. The story flows like a river in the delta; placcid and calm, yet overwhelming in its beauty, subtlety and minimalism. The film grows on you at its own leisurely pace.  Before you know, you cease to remain a distant viewer and become a part of their lives.

The performances set a high benchmark with the protagonists basking in the roles of their lifetime. Rahul Bose is amazing as the shy and gentle Snehomoy, Chigusa shines as the Japanese bride, Raima is elegant as a young widow and Moushumi is adorable as the vivacious, sometimes over the top masi ma. The rock solid characterization is evident in the way the Director manages to make the fringe characters hold on to their own, be it Paltoo the kid, the postman or the village folks.

A talk on the  ‘The Japanese Wife’ will be incomplete without mentioning the  cinematography. Anay Goswami’s camera brings out the best and worst of the Sundarbans come alive on film. This film is a delightful departure from the regular kitsch we are fed in the name of foreign locales and CGI. From the tranquil rivers of the region to the fury of the monsoons to the kites flying high in the sky, each frame is crafted with love.

As a final word, I did not watch a film.. I read poetry. For a sensitive heart and the lover of good cinema, this film is a beautiful Haiku which will soothe the senses and please the soul….