While we took you to a tour of the Basilica Bom Jesus and Tower of St. Augustine in our previous trip to Goa, this time we were fortunate enough to explore some more of Old Goa. Though the time in hand was still short, we were successful in making the most of it. So on our last morning in Goa, I and Ekta set on our bike again towards Panjim, actually our third attempt at Old Goa.

Our first stop was the Se Cathedral. This World Heritage Site had us in such great awe that I decided to dedicate one post entirely to it, less words and more photographs. 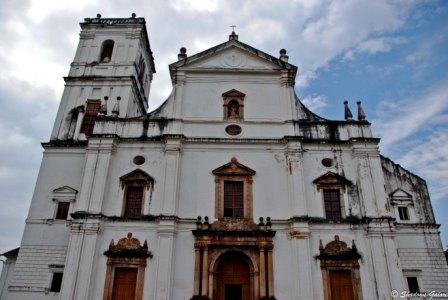 Built in 1619 AD to commemorate the victory of the Portuguese against the local Muslim rulers in 1510 AD, the Se Cathedral is dedicated to St. Catherine of Alexandria on whose feast day the victory was achieved. The cathedral happens to be the largest in India and is the seat of Patriarch of the East Indies in Goa. The huge campus of Se Cathedral, other than the monument, houses a palace of the Archbishop, a museum, The Church of St. Francis of Assisi and The Chapel of St. Catherine. 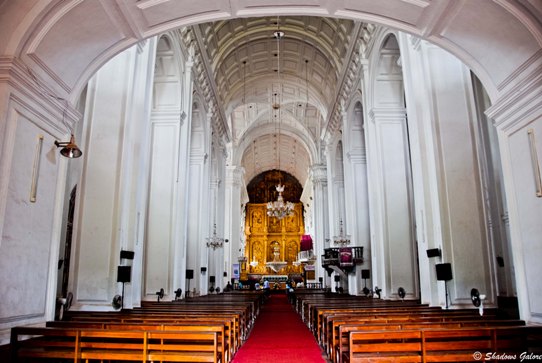 This was the scene which beheld us as we entered the Cathedral. Mighty arches supported by huge pillars led to an altar which looked as if it had been cast in gold. While the exterior of the building is Tuscan, the interiors are a majestic Corinthian. Other than the main altar in the front, there were several other altars on the sides, dedicated to different Saints of the Catholic faith. 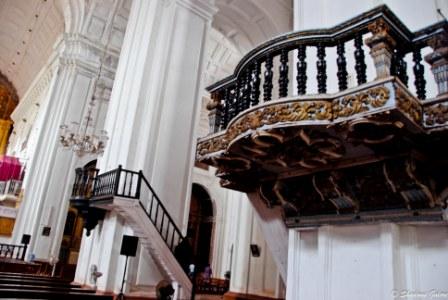 Words seem inadequate to describe the beauty of this monument. The whole place was of a creamy white with arches, columns, beautiful chapels made in Gold and silver and beautiful paintings from the Biblical stories. There were Saints, Angels and other celestial beings engraved in the most beautiful manner. The engravings on ebony and stone was amazing. The main alter was a congregation place straight from what I had imagined while reading the Dan Brown’s pulp fiction about the Vatican – rows of chairs leading to the main stage and overlooked by faces from the bygone centuries, carved in gold. One curious thing which I noticed were huge stone slabs placed on the floor with inscriptions and coat of arms. However since most of them were in Latin  I could not understand what they were until I saw one which was engraved in English.  These stone slabs, held beneath them, the graves of Bishops and monks who for centuries preferred being buried as near to their lord as possible instead of being given a burial in some distant graveyard. After this, we were double careful not to step on them. 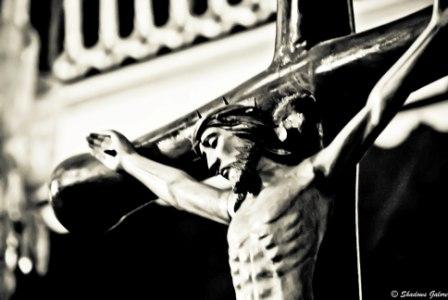 Jesus on Cross, the cross was said to have had an image of him decades ago

This was the main cross of the Cathedral with a Christ citified on it. This particular cross has a legend associated with it. Just look at the serenity on the face of the Christ. There is another cross called the Cross of Miracles on which a vision of Christ has been said to have appeared in 1919. It is also said that even though made of dead wood, the cross is growing slowly with time.  However, we have only faith to substantiate these stories. 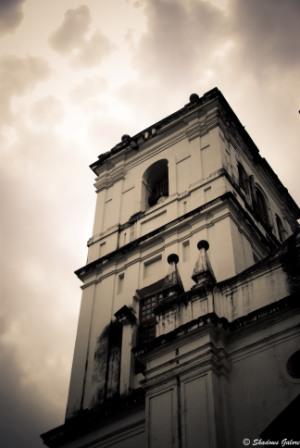 The front facade of the Cathedral is more than 100 feet high. On the northern side of the facade lies this tower with a giant bell. There used to be originally two towers on the either side of the facade but the Southern tower collapsed in 1776 and was never rebuilt.

After coming out of the cathedral, we moved on to what the signboard mention as the Archbishop’s palace . It was an old and relatively run down building  but had a majestic staircase and a beautiful window facade. Unfortunately the doors were locked and so we proceeded to the museum.

The museum was an interesting place. It showed the rich history of Goa and Konkan from the earliest times to the Portuguese rule. There were beautiful artifacts from the colonial past which included articles of daily usage and other stuff of antiquity. However the most impressive part of the museum was the art gallery adorned with beautiful Biblical paintings and life-size oil paintings of the rulers of Goa, from the earliest ones to the Salazar. The older paintings were made on wood while the newer ones were on canvas. One thing which we noticed was that, in the 1600s, even men used to wear high, almost pencil heeled, shoes !

The only thing which I hated about this museum was that they did not allow photography. I wonder why most Indian museums are so averse to photographers, they treat cameras as if they were bombs! This is certainly not to save the heritage from copy as photographs of the articles of the museum were on sale at a sales counter! However since no one was manning the counter, we had to come back empty handed. I did not like it a bit. 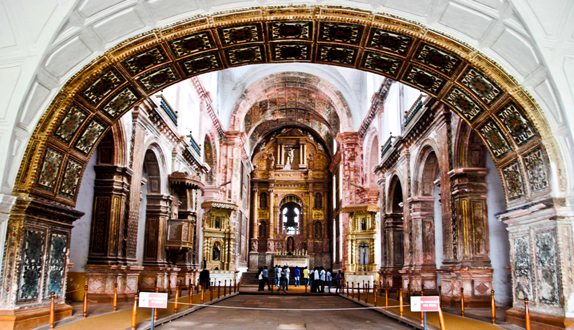 Church of St Francis of Assisi, as we saw it from the entrance

We were in for a surprise as we came out of the museum building. Immediately to our left was a door leading to another monument, which we might have missed easily. As we stepped in, curious to see what was on offer in this another seemingly run down place, the grandeur which lay before us made our jaws drop! This was the Church of St. Francis of Assisi and as we passed through a majestic Manuline style arch towards the main altar, I felt a delight building up inside me – like a child who has found a bottle on the sea shore- with a genie inside. While the entry arch was majestic enough to make the most accomplished architects kneel down in reverence, the altar with a Baroque soul competes with a beauty equally immense in magnitude as well as detail. 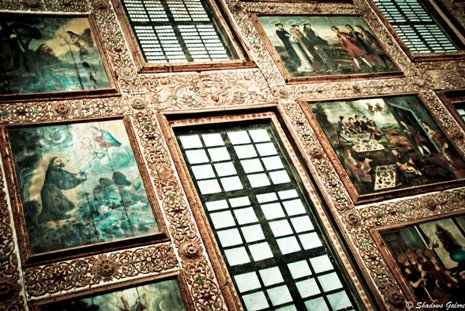 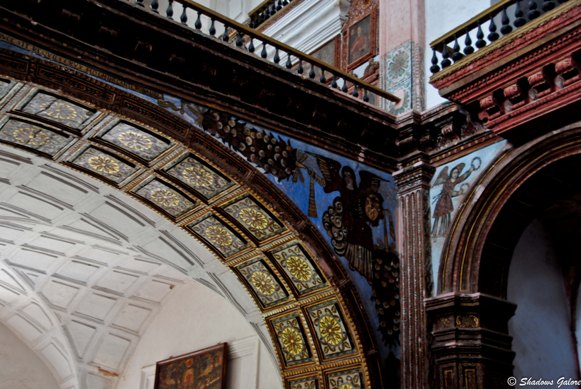 Church of St. Francis of Assisi

The high walls has frescoes with floral designs in great detail and were adorned with rich paintings. The richly gilded altar was decorated lavishly and had huge statues of Jesus and St Francis. But the most amazing part of the  church happened to be the arched gateway. Check the photograph and you will know why. Talking of photographs, please do not take photographs of people once you are inside any of the churches, it is considered disrespectful. However, you are free to click the monument away to glory. 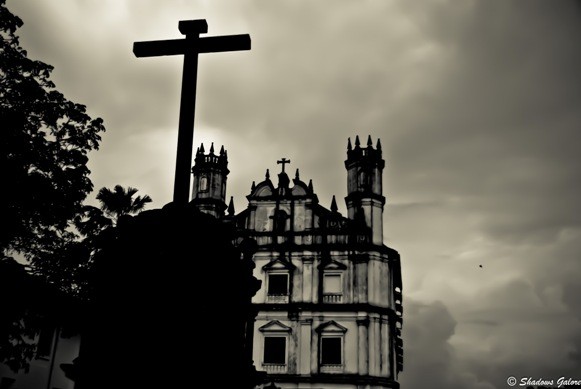 Church of St Francis of Assisi

To the right of the Church of St Francis of Assisi, was our last stop within the Se Cathedral Premises. We crossed a majestic cross and went down a flight of steps to a small chapel, called The Chapel of St. Catherine. Made of red laterite, it was a small and sweet monument, as we got to know later, built in the early 1500s by Alfonso de Albuquerque to commemorate the Portuguese victory of Goa. This chapel is also deemed importance because it is said to be the point from where the the conquerors from West first set foot in Goa. 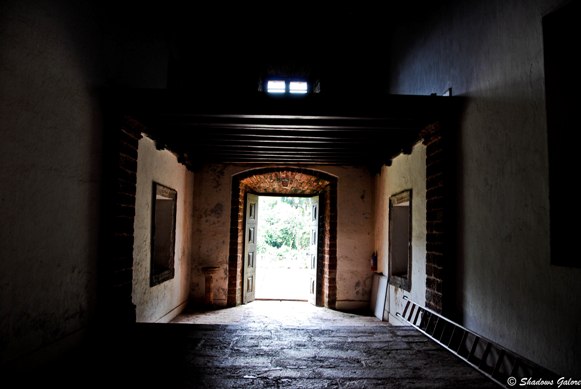 So this was Se Cathedral for us, and for you. Ekta was a bit bored but I loved this monument enough to pass through phases of awe, exhilaration, curiosity and intrigue as I passed through those ancient corridors. Goan beaches have their own charm but if you are in Goa and you have not seen this place, you will be missing something.