Cologne, Bonn and Königswinter – A memoir 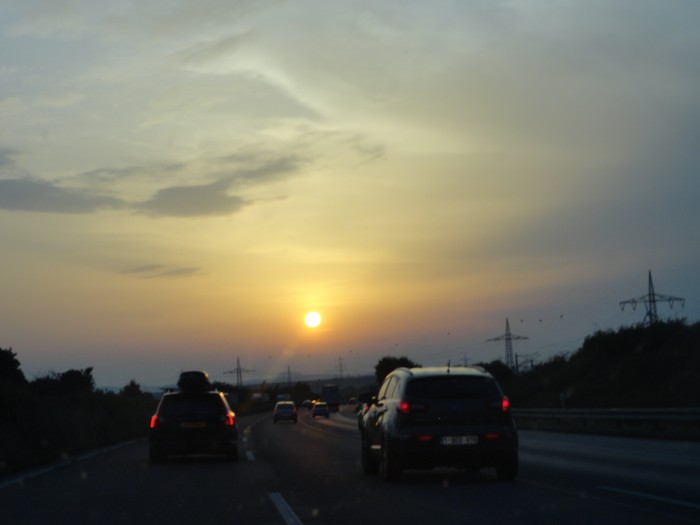 We were on the Autobahn driving at 140 kilometres an hour. We were chasing the setting sun at a feverish pace and it was playing hide and seek with us. Laura was telling us about her stay in the US. She had stayed with a “host” family for nearly an year, reaching the US as part of a choir group sent from Germany and as she recalled those experiences, there was a slight change in the tone of her voice. Sometimes, when we revisit a happy phase in our lives, the onrush of memories tends to transport us back in time, albeit, only for a brief period. In that period, we become one with our younger self and our voices give that away.

Coming back to the present, Laura has been travelling between Stuttgart and Cologne (where her parents live), an average of twice a month for the last five years, ever since work brought her to Stuttgart. Thanks to carpooling, once in a while, we get a chance to meet people like Laura. She told us with a tinge of amusement that her car has seen people of several different nationalities but never Indians! We were the first ones apparently. Her professional life too intrigued me. She works in an agency that manages brands and is in charge of Gillette and one other brand, which I am unable to recall.

She dropped us right next to the Cologne cathedral at a quarter to ten in the night. At 20 EUR per person, it is certainly one of the best ways to travel inside Germany. The Cologne cathedral is incidentally the monument that is visited most by tourists in Germany! Even at that late hour, we could see tourists clicking away pictures. A group of girls were giggling and presumably pulling each other’s legs. At that instant, Pradeep with certain gravity, lamented that, the fate of Indians is perhaps so irretrievably tied to work deadlines and filial obligations that a proper vacation might never figure in their list.

We started our walk toward the hostel. Thanks to the navigation feature in my phone, we could reach the place. We checked in and came out looking for a place to have dinner. Our walk led us to the old city (Altstadt) and Café Extrablatt was the only place open at that late hour. Food was delicious and the ambience, just about perfect. All around us, people were drinking Kölsch beer. A specialty of Cologne, this beer is served in cylindrical 0.2 litre glasses; is clear and has a prominent yellow hue. We talked random subjects even as the rain intensified. We had to wait for it to subside before making our way back to the hostel.
History, perfumes, love, chocolates and Kölsch: 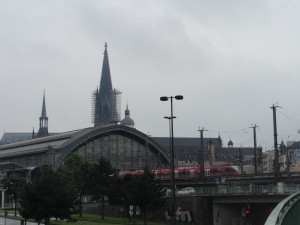 Cathedral seen from a distance

Next morning, the damp weather persisted. Our first stop was the cathedral. We could see the imposing structure across from the hostel. It is Germany’s largest cathedral and a world heritage site. It also happens to be the largest Gothic church in Northern Europe! The construction of the cathedral was completed in 1880, 632 years after it began in 1248. 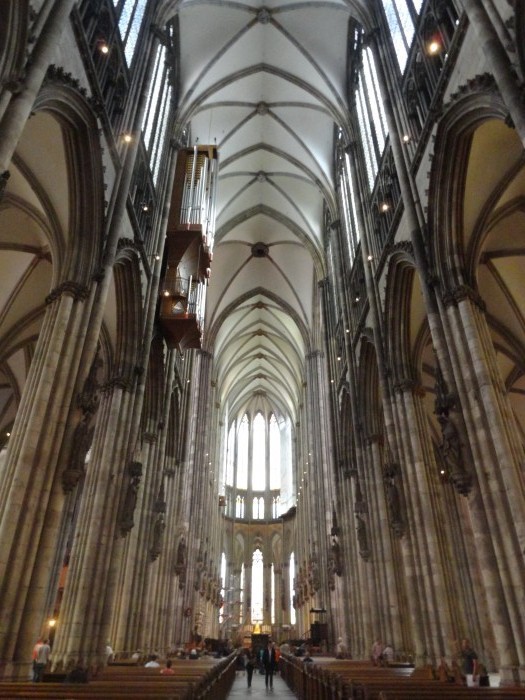 Prominent place inside the cathedral is occupied by the shrine of the three kings. This is believed to contain the remains of the biblical magi. (The three wise men are distinguished foreigners who were believed to have visited Jesus after his birth) The large facade of the monument, the size of the windows and the sheer verticality were all aspects of classic Gothic style that were in clear evidence. 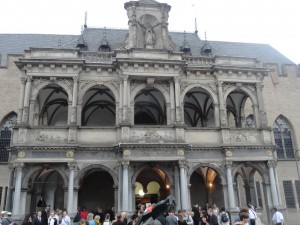 From the cathedral, with maps in hand, we proceeded. Our destination was the Nazi documentation centre. Instead, we reached the Cologne City hall (Rathaus) where curiously, a marriage ceremony was underway. Then, neither did we know that it is Germany’s oldest city hall nor that it is a popular site for marriages! We took a couple of turns and found ourselves opposite the original Eau de Cologne shop. Named by the Italian perfume maker Giovanni Maria Farina in honour of his new hometown, Eau de Cologne is a “spirit–citrus” perfume launched in Cologne. We spent close to an hour discussing and choosing gifts for our friends and families.

We crossed Hohe Straße next -Cologne’s busiest street- on our way to the EL-DE haus. Even though it was raining, people were out in large numbers shopping. What was striking was the difference from Stuttgart and Munich. We could see people from all classes here… 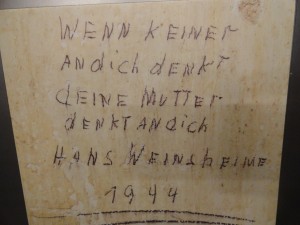 “When nobody thinks of you, your mother would think of you”, inscription by Hans Weinsheimer, a youth imprisoned at the Gestapo prison

The EL-DE haus, also called the NS Documentation Center of the City of Cologne used to be the regional headquarters of the Gestapo, the dreaded secret police of the Nazis. The Gestapo during the Second World War, had unlimited power; power to imprison without trail. As a museum, this is another chilling reminder of the cruelty of that period. The basement housing the torture rooms and the prison cells still has inscriptions made by the prisoners. Some of them were truly heart rending.

After lunch, we purchased a day ticket and boarded a tram followed by a bus to the chocolate museum (Schokoladenmuseum). Since I was not interested in the history of chocolate, only Pradeep and Prince went in while I immersed myself in a book. At one point, I stopped reading completely to indulge in people watching. There were large groups and quite expectedly, kids were running about carrying big chocolates. 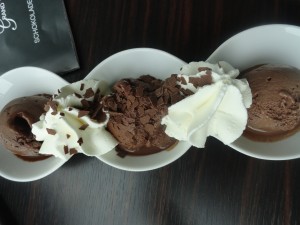 Indulgence at the chocolate museum cafetaria

The adjoining cafe was a heaven for the taste buds and if you are a chocolate lover, it is bliss! We let our taste buds have a field day. From the cafe, one can enjoy views of the cruises making their way on the river Rhine. 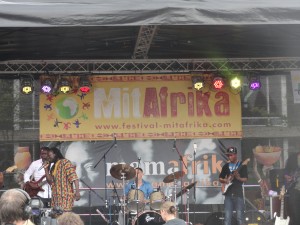 We came out of the cafe to find that an African music festival was underway right outside. The atmosphere was carnival like with the crowd unwinding and the singers pampering the crowd. 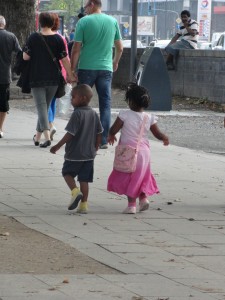 Near the Hohenzollern Bridge

From the museum, we set out walking towards the Hohenzollern Bridge. Crossing the river Rhine, the bridge is particularly scenic in the evenings thanks to the tourists. Train traffic on the bridge is a stupendous number! Along thewalkway leading to the bridge, we could see numerous birds either alighting or flying from the banks of the Rhine. 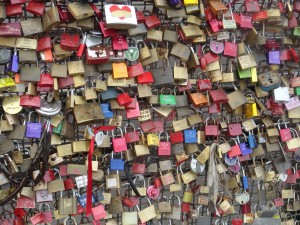 Affixed to the bridge were countless love padlocks. A group of Chinese tourists were absolutely fascinated by the sight. A Sri Lankan Tamil family passed me by and the lady was dressed in a traditional sari. A group of cyclists whizzed past. A feeling that I could not pin down swept over me then, something skin to being at the centre of the World’s cultures. I paused and made a full 360 degree sweep of the place to record the moment in my mindscape. Cologne had left an indelible memory! 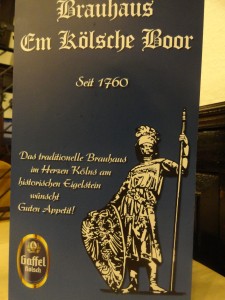 We shopped for some souvenirs near the cathedral and went to Em Kölsche Boor, a brewery with a 250 year old tradition. The fresh Kölsch GAFFEL-KÖLSCH I tasted there will remain with me for some time to come. It was unmistakably elegant in its taste. (I run the risk of language puritans accusing me of using the word ‘elegant’ out of context, so be it!)
Oozing history: 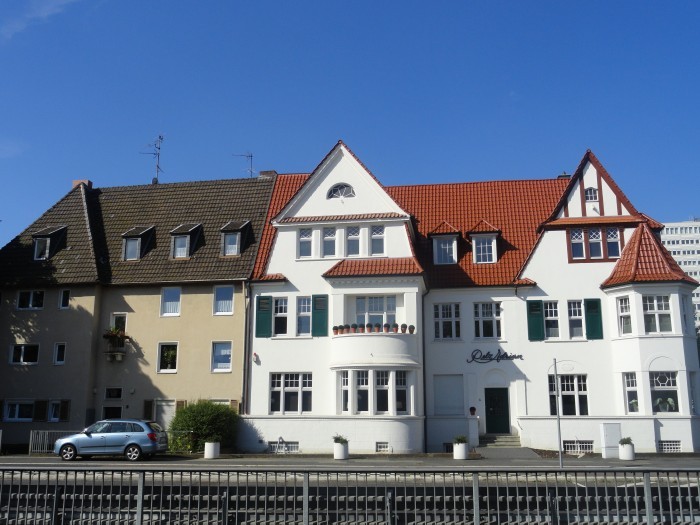 Along the museum mile in Bonn

Late evening on Saturday, we took a train to Bonn. Perhaps because of our homework (Bonn was the capital of West Germany from 1949 till 1990 and the seat of the Government of united Germany from 1990 until 1999), we could sense an air of lost glory about the city and I remembered the smell of a room that has just been cleaned of its prized possessions. We checked in at the Bonn youth hostel just before midnight. 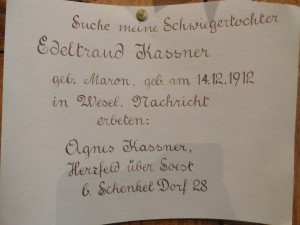 Early next morning, a quick breakfast later, we reached the “House of the History of the Federal Republic of Germany” (Haus der Geschichte der Bundesrepublik Deutschland) I’d not be exaggerating at all if I say that the exhibits brought history alive and breathing. Standing before some of the exhibits, I could see black and white reels in my mindscape rich with detail and throbbing with emotions.

Starting with an exhibit of the laws that were enforced by the four powers (Britain, France, United States and the erstwhile Soviet Union) just after the end of the World War II, just the act of assimilating those numerous informatively rich exhibits (European recovery plan, Berlin blockade, industrial impetus driven by policies like ‘Cars for all’, life under dictatorship in the GDR, signing of the Franco-German friendship treaty, how vacations came to occupy a permanent fixture in the calendars of Germans, influences of the pop culture on young Germans, industrial successes, impact of the soviet reforms of ‘Glasnost’ and ‘Perestroika’, the rebuilding of the east and more recently, the technological advancements) was an experience that was mentally exacting.

A world of romanticism: 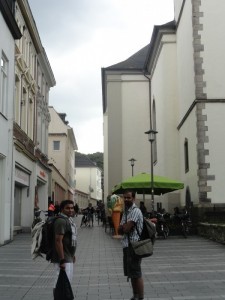 After souvenir shopping in the museum premises, incidentally, we perused a brochure we had picked up from the youth hostel and a particular attraction caught our attention – the rack railway line from Königswinter to the summit of the Drachenfels Mountain. Instantly, we decided to head there. We reached the charming town of Königswinter by tram line 66. An idyllic beautiful town, it was a pleasure just walking randomly here and taking in the sights it had to offer. 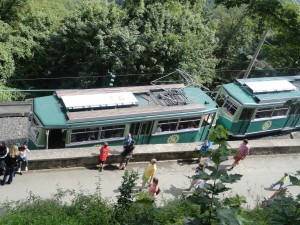 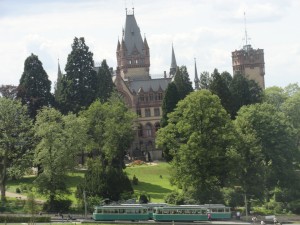 The trek down to the town

The rack railway station at Königswinter was thronging with tourists, mostly Germans from nearby districts and states waiting to get to the summit of the Drachenfels Mountain. The ruins atop offered splendid views of the plains and vegetation below, besides stunning vistas of the Rhine River gently flowing in its course. We trekked our way down to the intermediate station – the beautiful Schloss Drachenburg. Since the weather stayed pleasant, we decided to continue trekking until the town. On our way, we passed by several families – with kids in tow – sauntering down.

Sunlight bathed Rhine in a glow that accentuated the beauty of its surroundings. Reaching Stuttgart was in a sense a leap from the world of romanticism to the world of realism!