“If Angkor Wat, the Bayon and other temples are testimony to the genius of the ancient Khmers, Ta Prohm reminds us equally of the awesome fecundity and power of the jungle.”

At first I was planning to club Ta Prohm with Angkor Wat but this place is so unique and beautiful in itself that it seemed totally unfair to not to give this place a dedicated tribute. 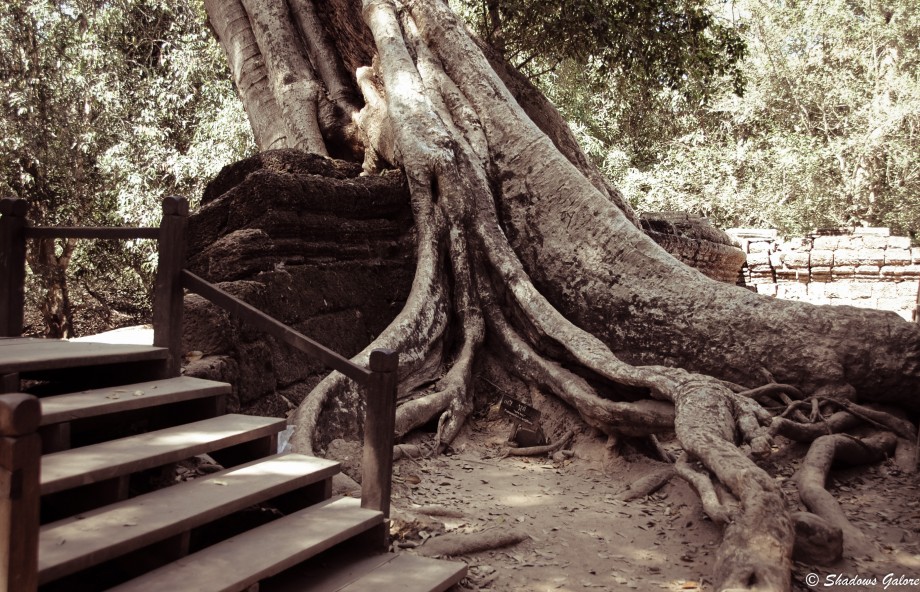 So after a sumptuous lunch, we drove through the forest and narrow lanes and came to the gates of Ta Prohm. The outside was quite crowded with tourists, vendors and construction workers working on the restoration of the main gate. Had to walk a little on a dusty track, there were vendors selling traditional musical instruments and a group of musicians, apparently landmine victims, playing soothing Cambodian music. At the end of this path, we came across a small wooden bridge leading to the temple. I was astonished to see a signboard in Hindi warning of Danger! It was then that we realized, with some pride, that it was our own ASI working to restore the monument. 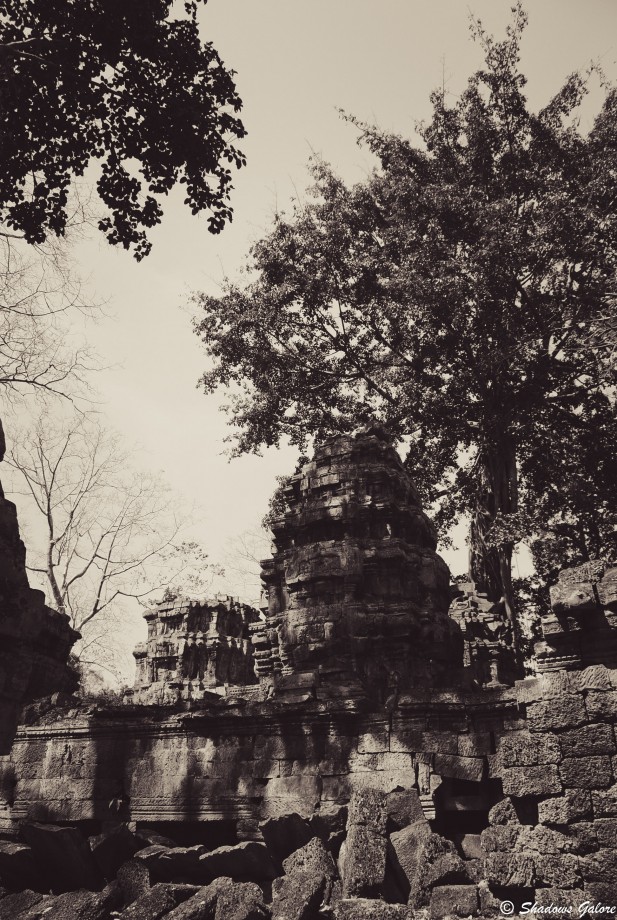 A glimpse into the past

Built-in 1181 AD by Jayavarman VII, Ta Prohm was a huge temple complex home to as many as 12,500 people at a time. The expansion of the temple continued way till the 13th century after which it the decline started with the decline of the Khmer civilization. For centuries, the temple got swallowed up by the jungle and remained forgotten till it was discovered again in the 19th century. 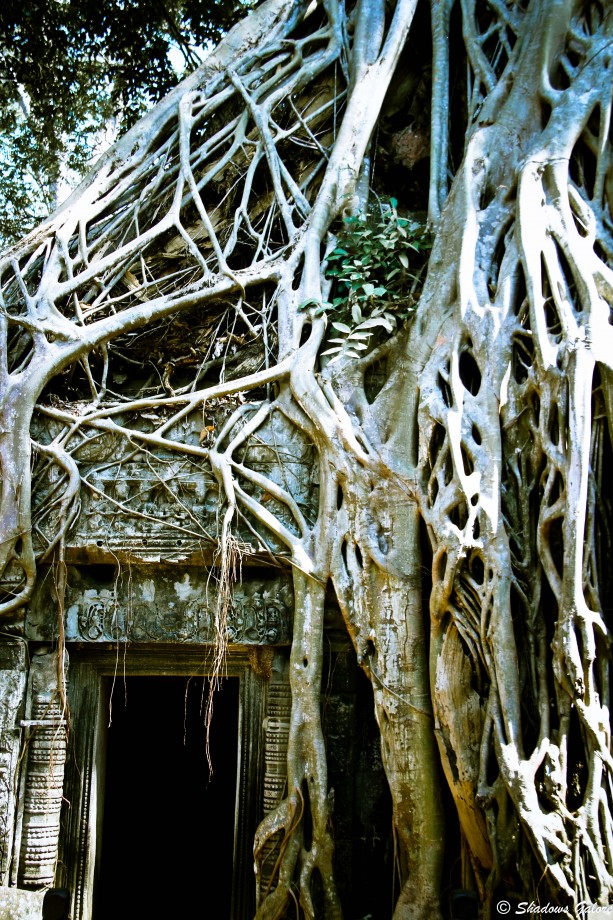 Ironically, the real beauty of Ta Prohm lies in its state of ruin. In this place, the skill of man and the might of nature have combined together in a unique fusion of an art form which at the plainest can be called surreal. Here, one can see both sides of nature- as the creator and the destroyer. Giant roots of fig and banyan trees coil around intricately carved stones like the death-like grip of a serpent. The ruins and the jungle together present a unique haunted charm which is difficult to be crafted in words. My photographs seem so inadequate in expressing those feelings. I could only wonder how the early explorers would have reacted when they stumbled upon this jewel from antiquity. You can see some great Angkor and Ta Prohm photographs by National Geographic here. 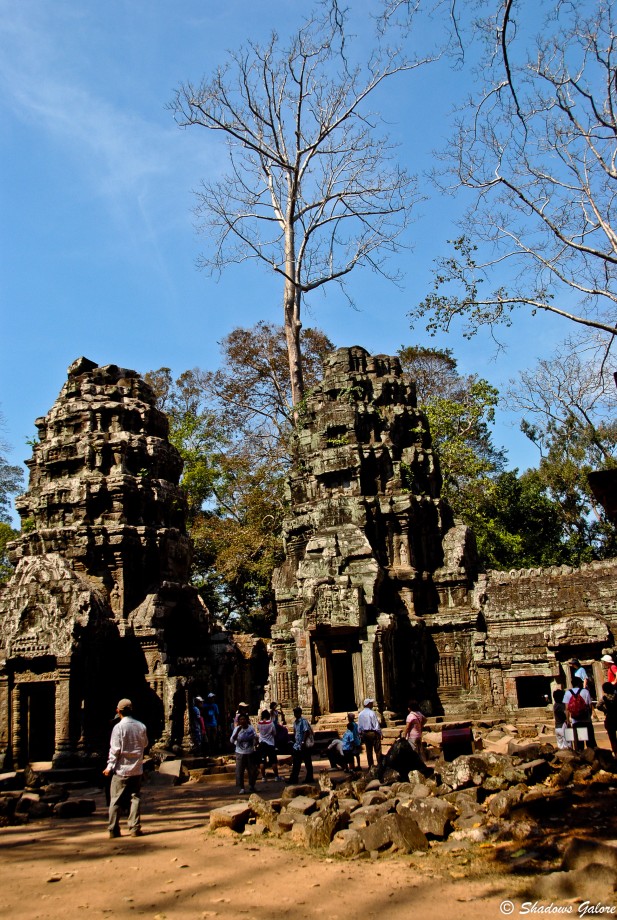 Ta Prohm in the light of the day

So, in sheer amazement, we wandered through the ruins. It was such mazelike that very soon I and Jayant got separated from the other two and wandered aimlessly through dark corridors, piles of stones and still standing monuments with huge trees coming out of them. There were ancient doors gripped by the roots of a banyan, and the famous “Tomb Raider” tree where Lara Croft gets sucked in the ground. For a brief period when even Jayant had strayed away, I was totally alone there and felt as if I had no sense of direction or time. I know am getting too verbose, but the place did it to me. 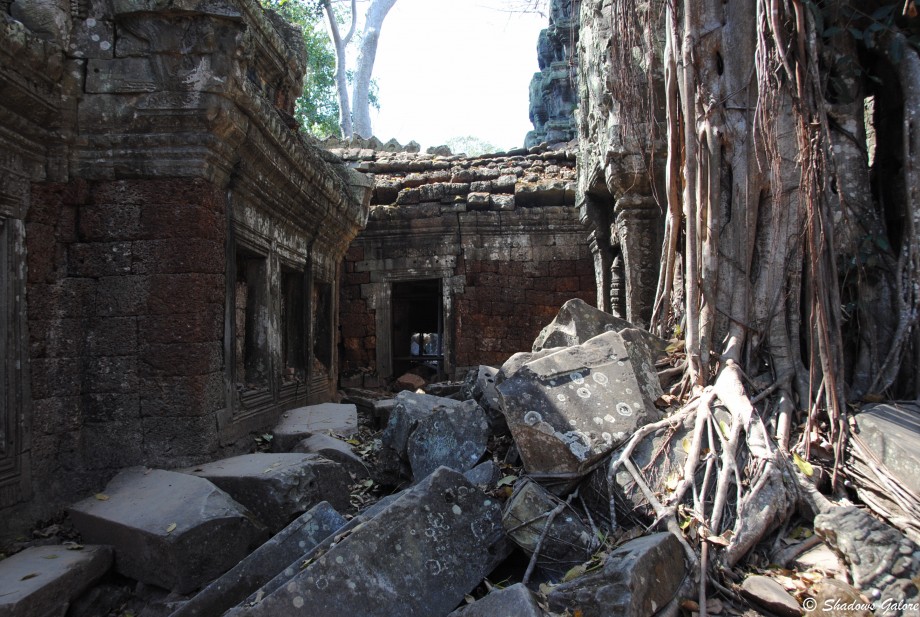 Ruins and Jungle in a complex synergy

Finding it really hard to explain what Ta Prohm really is, I stop here and leave it up to you whether you want to explore the place yourself. If you really go, reach there in the morning when the temple is said to be at its mysterious best, take a torch with you and if possible, a compass. Do let me know how it felt like when you come back 🙂