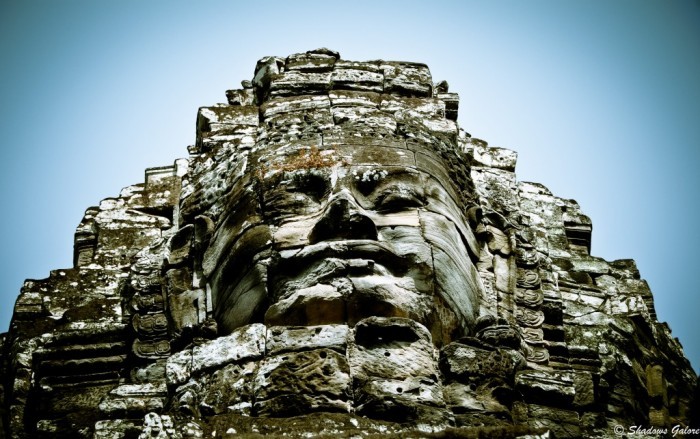 As I sat there reading Amitav Ghosh’s ‘River of Smoke’, I could see lights of some distant city from the window of the aircraft. Suddenly it struck me that I was going over the same places, both in fiction and reality. My plane was flying over the same lands of South East Asia about which I was reading how they started as small fishing/ trading hamlets, and now I could see the glitter of mighty cities they had become. It was a queer feeling… 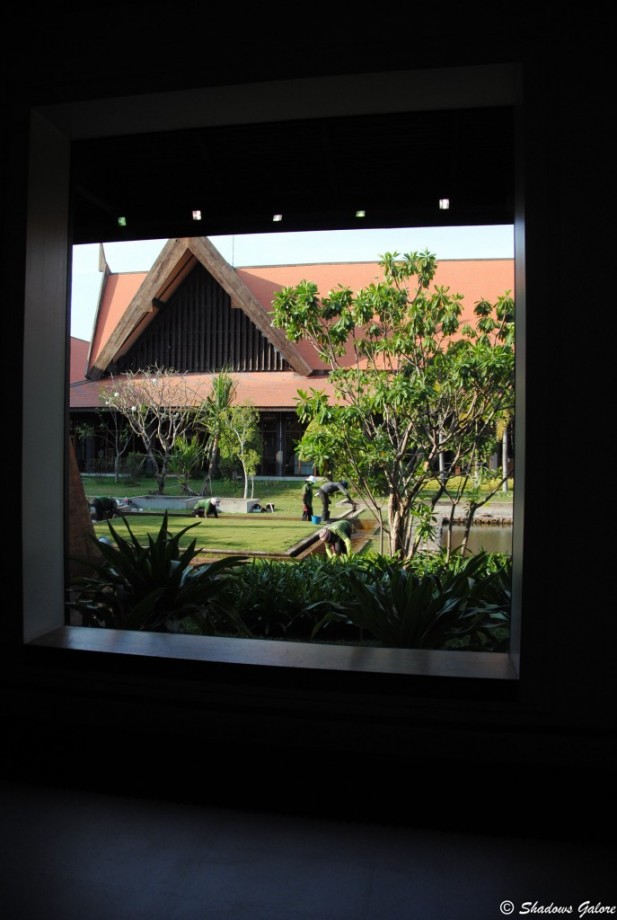 So after an uneventful night at the very unimpressive LCCT terminal of Kuala Lumpur Airport, we boarded the flight to Cambodia. The flight was short and we soon landed at the small and beautiful airport of Siem Reap, build like a traditional Khmer palace. Immigration was smooth and we were soon out of the place, in our cab for the hotel. Check in at the hotel and a quick freshening up and I was ready to strike one off my bucket list – Angkor Wat.

The first place in our itinerary was Angkor Thom. Built in around 680 AD on the sides of another capital called Yashodharapura, and expanded by the great Khmer King Jayavarman II, Angkor Thom was the capital of the Khmer Empire. Covering an area of 10 square kilometres, the city is said to have housed anywhere between 80,000 to 1,50,000 people at the height of its glory. The centre of the city was known as Prasat Bayon, a richly decorated temple of the Khmers, today most famous for the massive faces inscribed on its walls and towers depicting perhaps Bodhisattva, Shiva or the Khmer Kings. 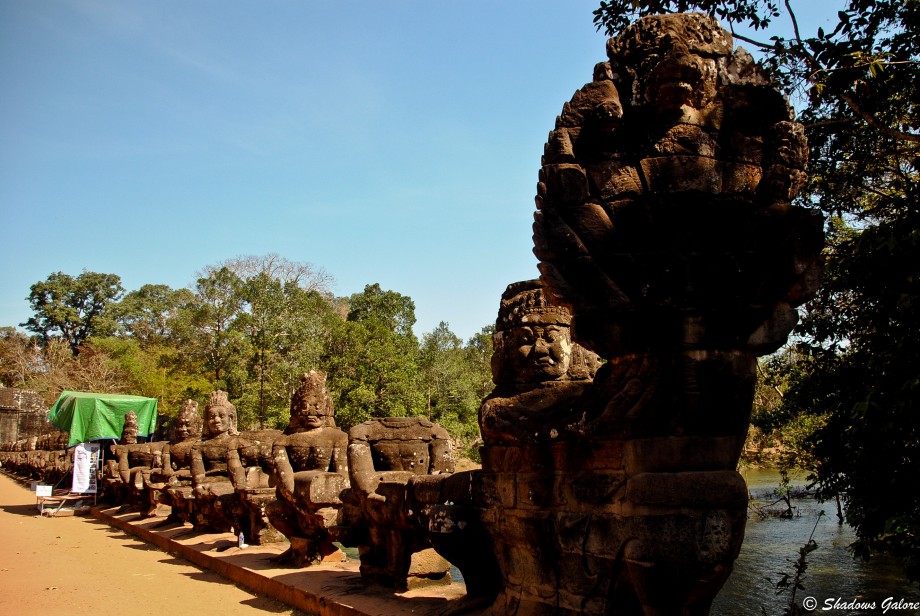 The Serpent and the Devas

It was around 10 AM that we reached the Southern Gate of Angkor Thom. I can’t describe the feelings it brought to my heart. Finally, after a wait for nearly 2 decades, I was at Angkor. I could see a gate with the familiar face of the Khmer Kings. A bridge over a moat led the way to the Gate flanked by two serpents who acted like the railings of the bridge with statues of Devas holding them in one row and Asuras in another row, symbolic of Samudra Manthan. 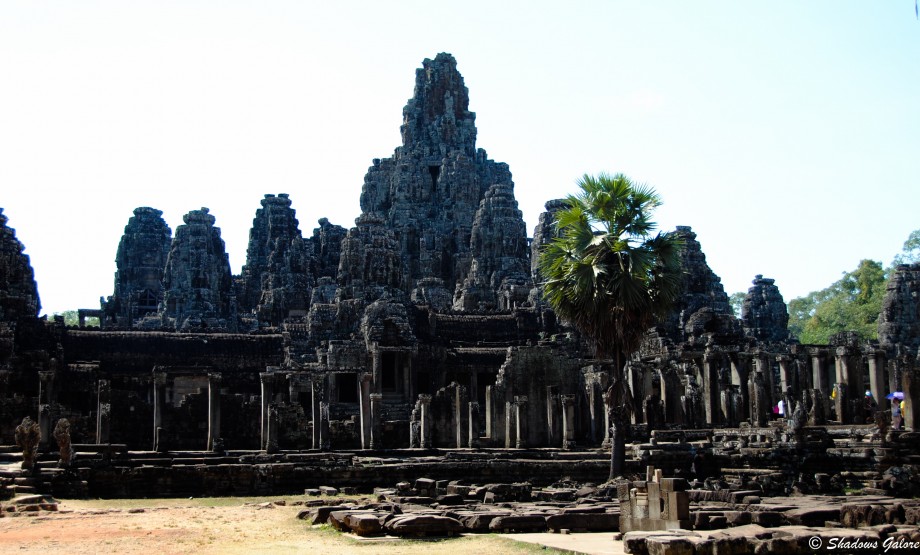 Our first stop in Angkor Thom was Prasat Bayon. Located at the exact centre of the ancient city, this magnificent temple is a combination of many galleries and terraces with a central terrace and tower. This was my first full-scale encounter with the traditional Khmer architecture and needless to say, I was swept away by its magnitude and intricacy. The galleries of the monument were an art gallery in themselves with beautiful bass reliefs depicting scenes from everyday life to mythologies to wars. The outer galleries were dedicated to the Khmer culture, scenes from the court and everyday life. Then there were depictions of the wars, magnificent armies locked in pitched battles. The inner galleries were more devoted to Gods and mythologies, with Brahma, Vishnu, Siva and other gods and goddesses depicted in different avatars. There were narrow corridors, staircases leading to antiquity and the overall feel was of deep intrigue. Now I could understand why Lara Croft chose this place for her adventures… 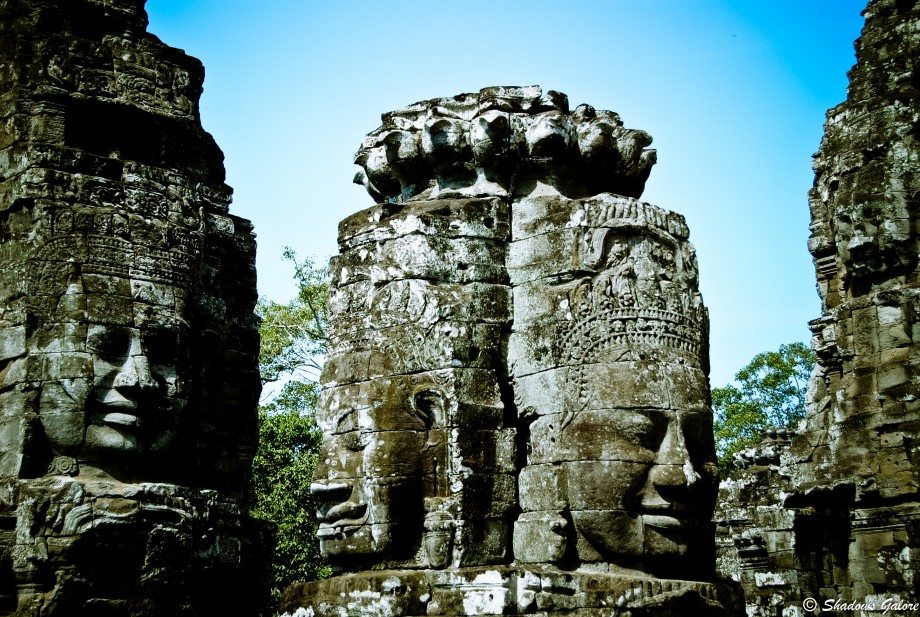 Done with the galleries, we proceeded towards the most famous facet of Bayon, the Upper Terrace with 200 faces of Lokeswara. The Upper Terrace lies nearly on the top of the Inner gallery with a central tower going high. But what makes this part really famous is not the Central tower but 37 “face” towers surrounding it, each tower showcasing three or four serenely smiling faces of either Bodhisattva, Vishnu or Jayavarman himself. In the words of Maurice Glaize, wherever you go, these faces follow you and dominate with their presence. This was exactly I felt standing there. For some strange reasons, I did not want to leave the place, but time constraints made sure that I did. 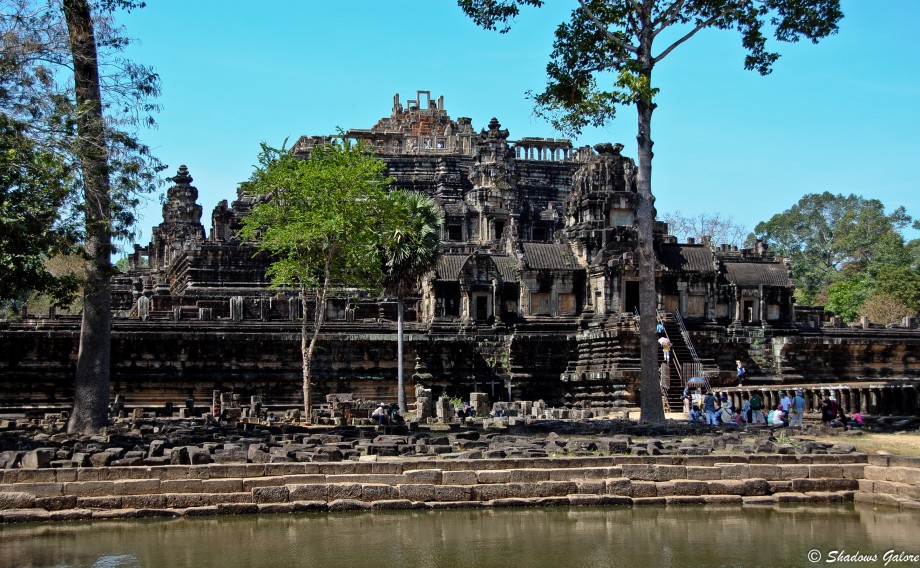 Our next stop was Baphuon. Built like a mountain shaped pyramid, Baphuon is a temple dedicated to Lord Shiva. This temple is famous for another reason; it was known as the biggest puzzle of Cambodia. Its restoration started around 100 years back. But in the 1950s, the French conservators decided that the only way to save it was to dismantle it fully and then restore it. So its 300,000 blocks were dismantled and then numbered carefully. However, at the same time, wars started and the documents related to restoration were destroyed. It was followed by the Khmer Rouge rule and a Civil Strife for decades in which Baphuon remained as a pile of stones often plundered by Tomb raiders for artefacts. When peace prevailed, restoration started in 1995. Then the task to piece together this mammoth 3D puzzle fell on the restorers. Finally, after 15 years of Herculean effort, they were able to bring the temple together in 2011. There are some 10000 pieces left over, but not much can be done about them and they are lying around. 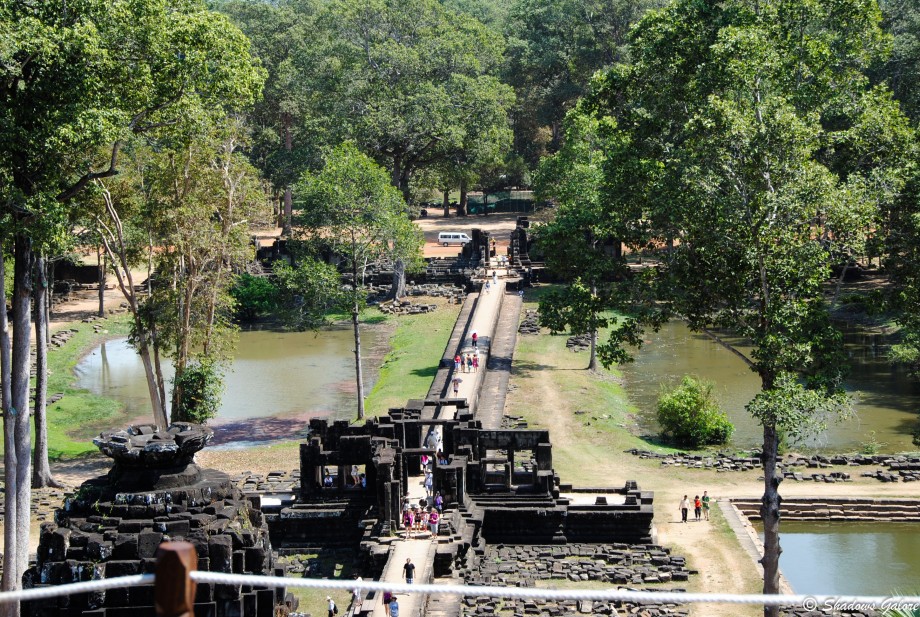 Well, Baphuon, if built like a mountain, was a steep climb. In the hot sun, it did require some effort. Only Jayant and I went to the top and we did not regret it. From the top, we could see almost all of Angkor Thom, jungles and ruins in a beautiful landscape. At the crest, there were 2 door frames, going nowhere, I wonder what they were for. 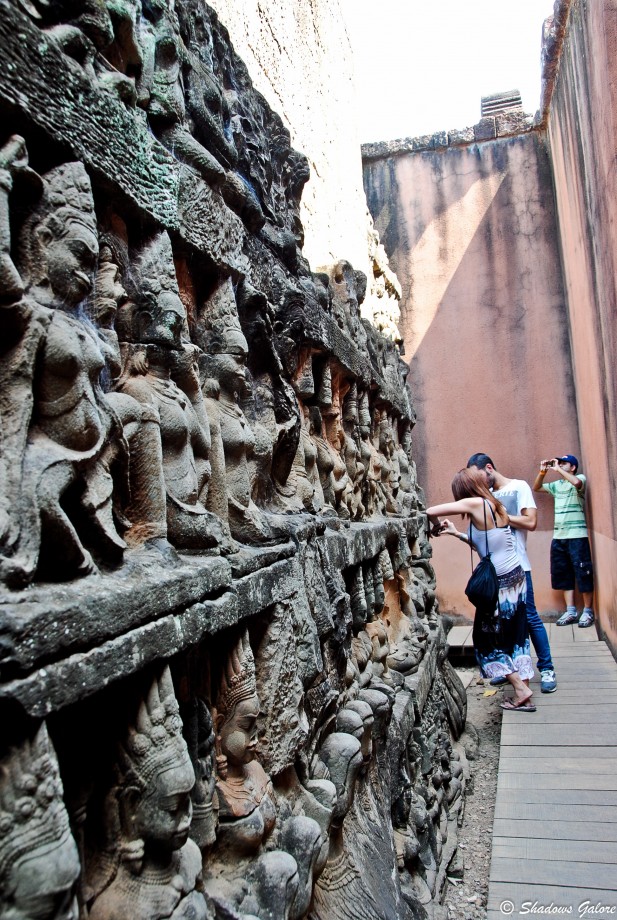 Terrace of the Leper King

Here we took a break, for we had to fill our stomachs. Once we were done with our lunch of noodles and rice, we were ready for our next destination- the Angkor Wat, and before that, something special. Stay tuned 😛