Even after taking a much-needed sleep we were yet to recover from the fatigue of the previous day. My legs and thighs were hurting as if I had been beaten up the previous day. Dragged ourselves to the car and then started for our next destination, Anuradhapura.

A city built around a sapling from the Bodhi Tree under which Buddha attained enlightenment, Anuradhapura is considered as the cradle of Buddhist Sinhalese Culture. It has the distinction of being the political and spiritual capital of Sri Lanka for 1300 years till it was devastated beyond recovery in an invasion in 939 AD. Reclaimed from the forests, this ancient city today remains as a silent testimony to the heights of the Sinhalese civilization. 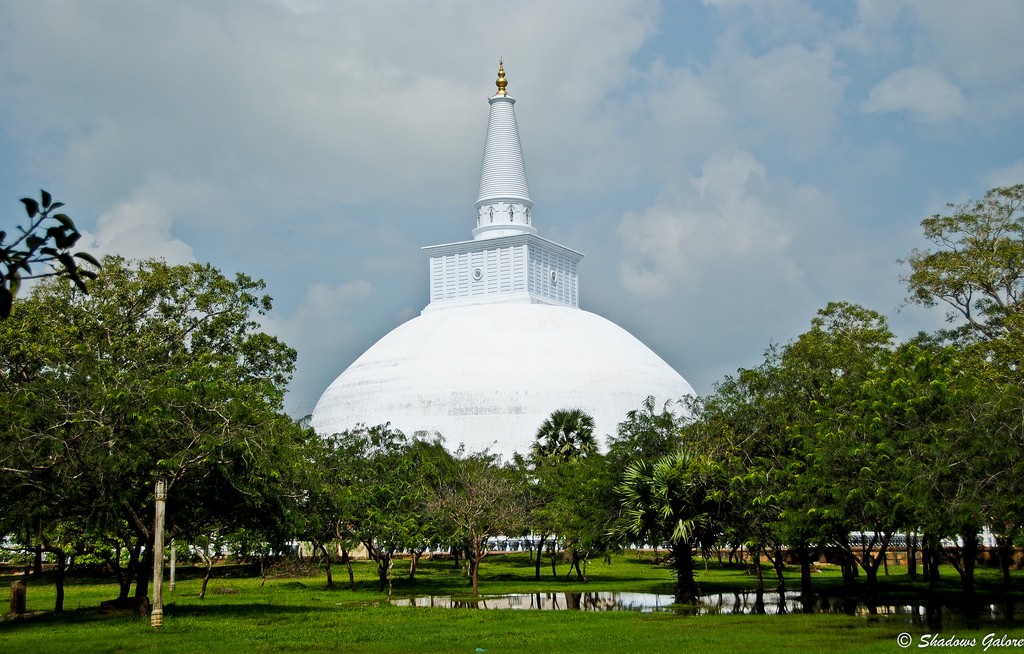 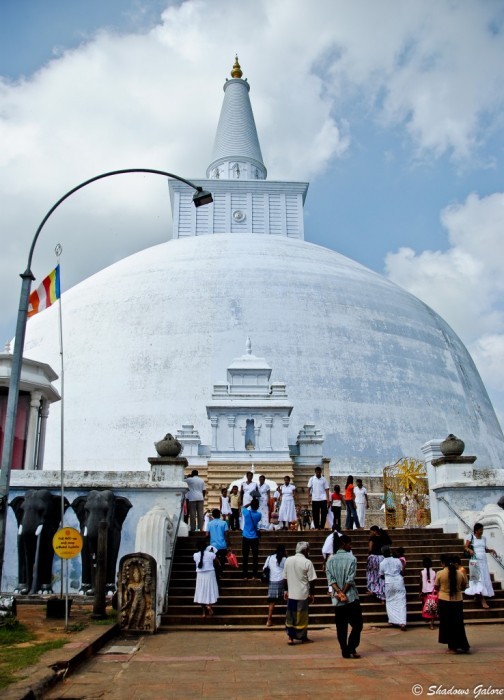 Our first destination in the ancient capital was to be the Mahabodhi Tree or the “Bo” Tree as it is called in Sri Lanka. However, before going there, we visited the glorious Ruwanweliseya Stupa. A giant structure clad in white, this stupa brought to my memory the World Peace Stupa I had seen in Rajgir when I was very young. 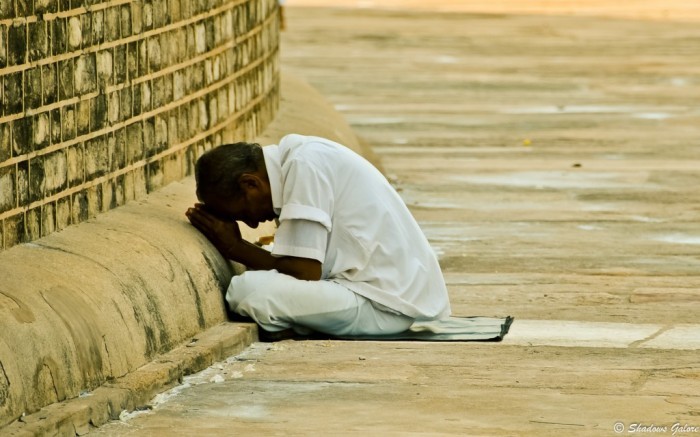 A Man praying at Ruwanweliseya Stupa

Built around 150 BC, it continues to be the most venerated stupa in Sri Lanka. This was evident by the number of devotees kneeling over the body of the stupa and praying. 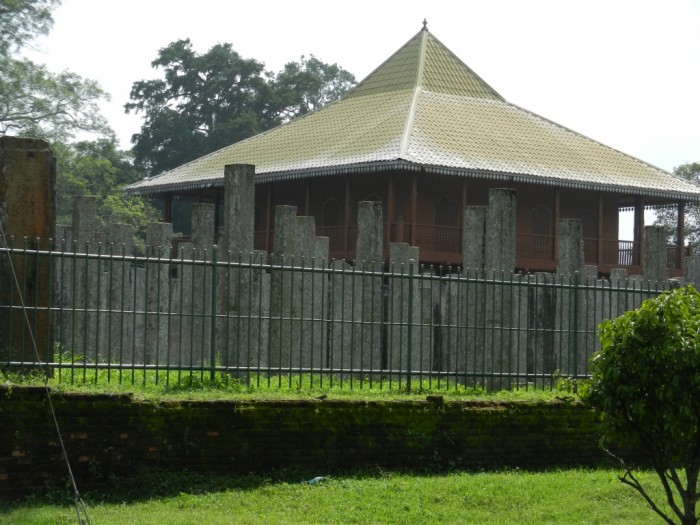 From here we walked towards the Mahabodhi Tree which has grown from a cutting of the original Bodhi Tree which was brought to Sri Lanka by the son of Mauryan Emperor Ashoka, Mahendra. It was a straight path and we passed through beautiful parks with lots of monkeys playing around. We passed by a building called Loha Maha Prasad (Brazen Palace) which was a bronze roofed home to 1000 monks at a time. 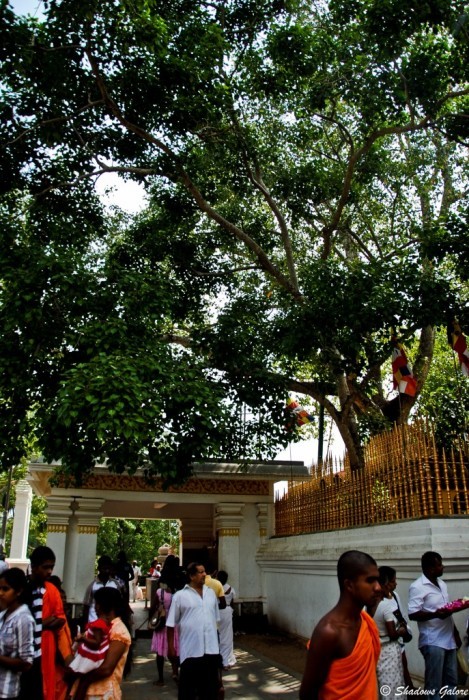 Finally, we reached the Bo Tree. Interestingly this was the second Bodhi Tree I had seen in less than a year, the first being the one in Bodh Gaya which is again grew from a sapling of this Bo Tree when the original was destroyed. Let me confess that it always feels nice to be under its shade. The place was alive with numerous devotees and monks offering prayers. 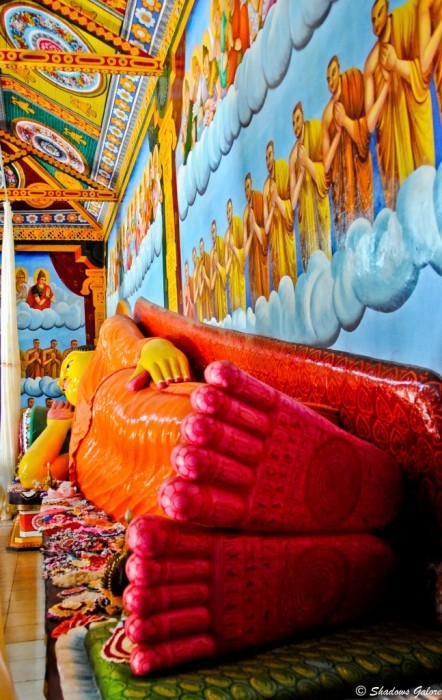 After spending some time near the Bo Tree, we came back to our car and then Suresh took us to a small museum which gave a lot of useful information about the history and heritage of Anuradhapura and Sri Lanka. We then went to see the famous Abhayagiri stupa which was built in 88 BC. This gigantic stupa once had a big monastery which shaped the religious and cultural lineage of Sri Lanka for centuries. We also saw an image house which has a beautiful and colourful statue of Buddha in a reclining position. 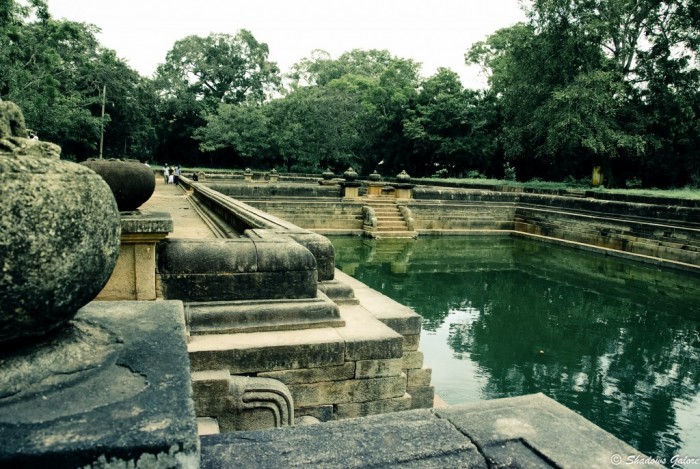 A few more monuments later, we came across one of the most famous pieces of architecture in Anuradhapura, the Twin Ponds. They are two identical ponds built side by side and fed by a single stream which was used by the monks of the monasteries. Due to their architectural precision, they have acquired a special status on the tourist map of the place. 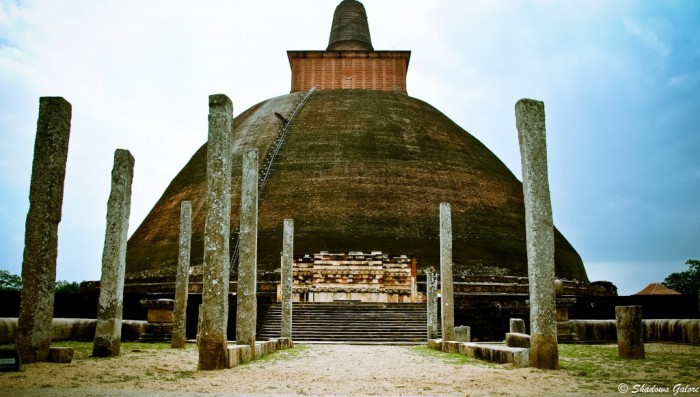 By this time we were fairly tired and also had to leave for Dambulla, our last destination in Sri Lanka. So we started for our last stop in Anuradhapura, another Stupa called Jetwana Stupa. Built entirely of bricks, in its heydays, it was the third tallest man-made structure in the world, surpassed only by the pyramids of Khufru and Khafra in Egypt. The complex has a plethora of buildings and statues, many of whom were destroyed during the Chola invasion. Currently, the stupa is undergoing restoration with help from UNESCO.

So this was the end of our trip to the beautiful city of Anuradhapura. It was amazing how such a beautiful civilization has reached its peak in this ancient cities during the times when many parts of the world were still crawling towards urban living. It made me very sad knowing that the armies which destroyed this beautiful city and plundered it, to the point that it became unlivable and was left to rot, were from my own country. We never learn from history and thus it keeps repeating itself in the form of wars and intolerance. From the destruction of the giant Buddha Statue in the Jetwana Stupa to the recent one in Bamian, Afghanistan, it seems that not much has changed around us. It was on this sad note did we leave Anuradhapura.