Now we come to the next important aspect of Photography- Composition. Composition is the placing of the visual entities within the frame. In other words, it is the rearrangement of all the subjects so as to accentuate the ascetics of photography. We need to decide what has to be included in the picture and what is best left out. Through various elements and techniques of compositions, we basically try to treat the eye of the viewer as the customer and guide it towards the product, ie, the photograph in the way we want to. To the uninitiated, this may sound a bit mind-boggling, but believe me, the easy things in life are often not the most interesting. 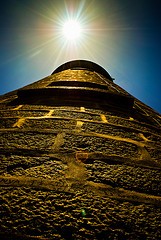 Perspective, IMHO is the most important part of composition and the single most important factor which makes a good photograph stand out from the mediocre ones. Perspective is the way in which the photographer looks at the subject, be it the angle, distance, altitude or something else which you can think of. So the first step in Composition is get your perspective right.

The picture given here is the only one from my own collections, taken of the Lighthouse in Mahabalipuram. This was an unusual angle to take a photograph of a lighthouse and produced beautiful results as far as the effect of direct sunlight (it was nearly 35 degrees out there) on the stone as well as the camera is concerned. Similarly you can try out different perspectives for the same photograph. This is where creativity comes into picture. Try to experiment with angles, distance et all and if you can make your photographs better. 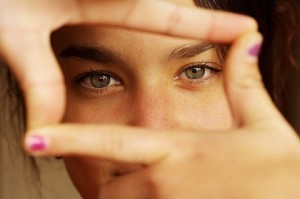 Frame is the total area of the photograph, i.e., the space in front of the camera which comes in the photograph. To make good photographs, it is necessary to frame it properly and make sure that there are no unwanted elements in the frame. It’s a good idea to fill the frame as too much leftover empty space diminishes the strength of the photograph. Balancing is also important in Framing, too many elements on one side will make it look unbalanced (try imagining a group photograph with all tall guys on one side). Position the elements so that they compliment and balance each other.

Space is where your photograph lives and breathes. While you fill the frame, you must also consider leaving enough space so that it doesn’t look all cramped. So between filling the frame and allowing the space, be ready to do a tight rope walking, and also feel free to abandon one for the other just for the sake of creativity. One important concept related to this is of Negative Space, on which we will discuss later. 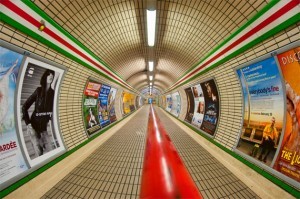 Lines have the ability to draw the gaze of the viewer to a particular point in the photograph. Lines contribute to both mood and linear perspective, giving the illusion of depth. Oblique lines convey a sense of movement and angular lines generally convey a sense of dynamism and possibly tension. Lines can also contribute to organization by dividing it into compartments. The different kinds of lines are Straight Lines (Horizontal, Vertical, Diagonal, Converging and Diverging) and Curved Lines. We will dedicate a whole article to them later.

Pattern Mother Nature is an amazingly systematic designer. If you watch closely, you will be able to see patterns in almost everything. Careful capture of these patterns can lead to remarkable photographs. All you need is an eye for spotting them and placing them aptly inside the frame.

Depth of Field is the degree of isolation of the foreground from the background. It actually requires an entire chapter to itself; therefore for now, we will stop by announcing that it is one of the most important elements of photography, especially portrait photography. 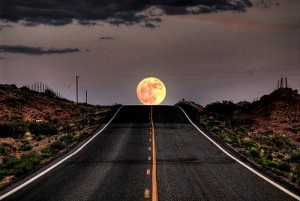 Symmetry is a double edged sword. It can either accentuate the effect of a photograph or diminish it, depending on how it has been used. So use it carefully! If you plan to make a photograph with a strong symmetry, make sure you have an equally strong point of focus. If the symmetry is leading to nowhere, the eye is just lost and the photograph becomes flat and unimpressive.

Here you can see how beautifully symmetry has been integrated into the pictures with the whole setup leading us literally to the moon.

Color and Texture are the last but not the least game changers in my list of Composition elements. The brightness, contrast and vibrance of colors and how are they placed in the photograph can alter the whole effect. Choose the right colors and textures to suit the “mood” of the photograph.

So this was a brief introduction of Composition, I hope it helps more than confuses. To make things clearer we will discuss the different Rules of Composition in coming articles.

Note: Most pictures in this tutorial have been taken from the Internet as I was feeling too lazy to take and upload them. Thanks to the original photographers. Guys you rock! 🙂