Photography is a form of art and many believe that art should not have any rules. But being the logical human beings that we are, we have managed to create some rules in photography as well. If you cringe at calling them rules, you may call them .. err.. best Practices in Photography. Many of these rules (enough of cringing!) are about Composition. These rules of composition are mostly based on the observation of the human gaze, how it looks at the photograph and where it comes to a rest, what are the things that appeal to it more and so on. These rules are not Commandments and can be modified or broken for the sake of creativity. Let’s know some of them. 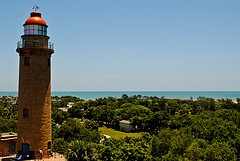 This is perhaps the most famous rules of photography. It states that if you divide the frame into 9 equal parts, the most important element should be placed on those lines with the even more important among them (like the eyes in a portrait) at the intersection.

If you look at the photograph on the right, it consists of a landscape with a lighthouse being the prime element. If you divide the photograph into 9 parts, you will find that the lighthouse falls in the leftmost one-third lying approximately on the left vertical line.

This rule was discovered by famous painter Leonardo da Vinci, although it had been put into practice by ancient Babylonians, Egyptians and Greeks in arts and architecture. He found that if a frame is divided into 9 unequal parts with the middle portion smaller than the ones on the sides, the eyes of the viewers will rest most at the intersections of the lines. So if the important elements of the pictures are placed at those intersections, they will be accentuate the beauty and harmony of the picture. This rule has percolated into photography as well. 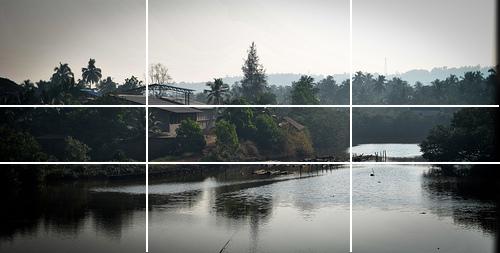 Lets have a look at the picture given above. The frame has been divided into 9 parts as suggested and on of the most important visible element of the photograph, the cottage lies on the intersection of the top horizontal and left vertical line. Although this photograph was not taking this rule into consideration, it can help in understanding the rule itself.

The Diagonal Rule states the following: “Divide one side of the frame into two parts, and then divide both halves further into three parts. The adjacent side is divided such that the lines connecting the resultant points form a diagonal frame. The important elements should be placed along these diagonals.” 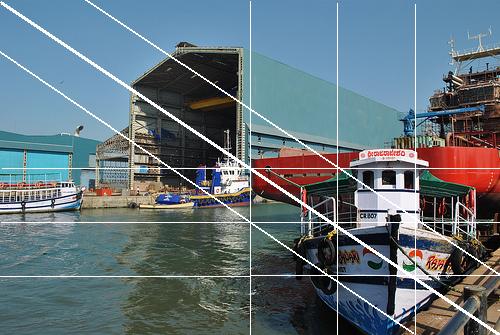 Consider the photograph shown above. Both the sides were first divided into two parts, then each side was divided into three equal parts. Lines were drawn connecting the points as shown in the illustration. You can notice that the photograph was taken in such a way that the prime elements of the photograph, the white boat and the Ship building yard fall on this diagonal frame, thus accentuating their importance. 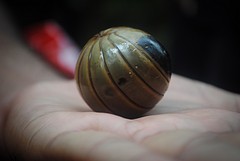 Simplicity in one phrase means, “Cut the crap”. In your frame, leave only what you want the viewer to see. Make the background less cluttered, remove unnecessary distractions and have few important elements. Very Simple!

Have a look at the photograph on the right. It is so simple, no unnecessary things hogging the background. If this millipede-ball had been lying in grass along with some pebbles, worms etc etc, would it have been so beautiful ?

When a viewer looks into a photograph, his eyes are drawn by the lines automatically. Therefore, use the lines in your photographs judiciously. They can be used to give an additional depth of field and perspective. Let the user travel through those lines to where you want him to go. Its more fun that way. 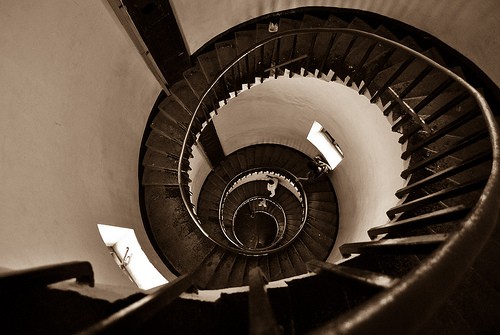 The photograph above is a rough explanation of this rule. The spiral lines in this staircase of a lighthouse guide you all the way to the bottom giving an immense depth to the photograph and giving a sense of going along the staircase.

So this was a brief insight into some important rules of Composition. In the next few lessons, we will deal more with these. Let me know if you liked this article or if you feel something was just not right. Together we will keep learning and sharing.  🙂