By the time we came down from the Nahargarh fort, it was late afternoon. The tourist places in Jaipur start closing down by 5:00 PM so we had to hurry up a bit on our next stops. Moreover, Ekta had never been able to visit Hawa Mahal in her previous trips to Jaipur and was very particular about having  a good look at this famed landmark of Jaipur. So we decided to skip lunch and devote the spare time to a nobler cause, fulfilling the demands of my wife. 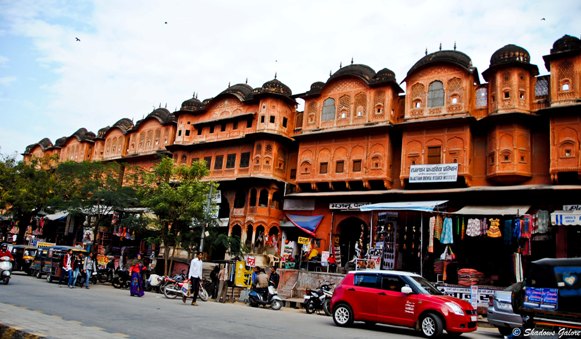 A Street in the Pink City

Founded in 1727 by Sawai Jaisingh, the old city of Jaipur, also known as the Pink City, is India’s first planned city. Based on the rules of Vastu Shashtra, the city was painted red by Sawai Ram Singh to welcome the arrival of Prince of Wales. This pink color became the hallmark of the city. Today as one passes through the streets of the crowded old city, one can see old heritage buildings on both side, shops and offices of the modern era built in the Rajput style of the yore, all colored in the same color of Pink. This is not the pink which is associated with femininity, this is a more Desi avatar and comes in a stronger shade, symbolizing welcome.

Jalmahal came along our way to the Pink City. Located in the middle of a big lake, this beautiful palace is among those built in the Rajasthani tradition of building royal residences at water bodies, as a summer retreat of the kings during the scorching summers of the area. We could only have a look at the palace from afar as boats do not ply till the island in the middle, or what our driver told us.

As we came back to the Pink City, negotiating our way through crowded markets and old colorful (though colored in the same shade of pink) buildings, Hawa Mahal was to be our first destination. Hawa Mahal (The Palace of Winds) does not need much introduction to the world as it is to Jaipur what the Taj Mahal is to India. This beautiful building was built during the reign of Sawai Jaisingh. Made of red sand stone and with countless jharokhas (windows) engraved in the most artistic fashion, this beautiful palace is a sight to behold. 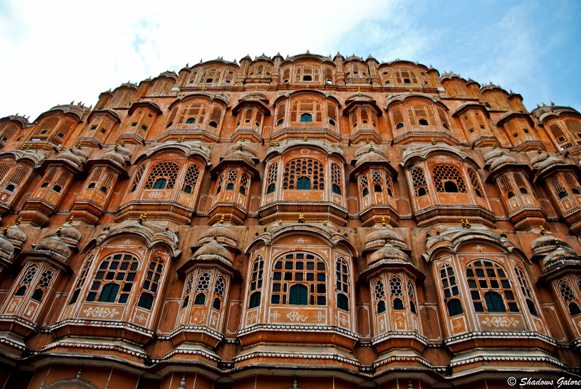 The Front Facade of Hawa Mahal 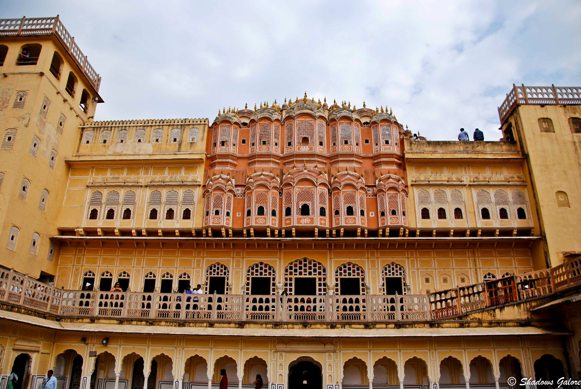 The Inner side of Hawa Mahal 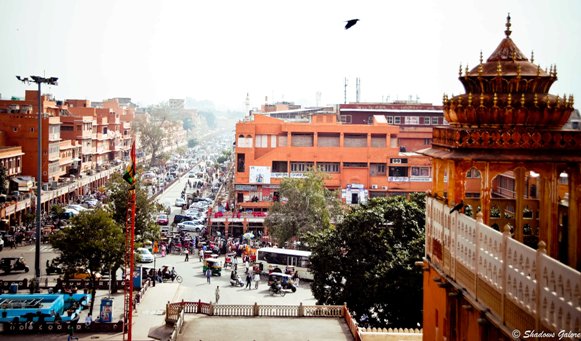 A view of the Pink City from the Hawa Mahal 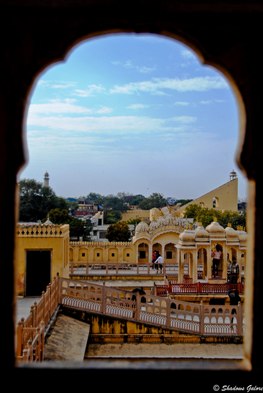 View of the Backside from a Jharokha. The giant Sextant of Jantar Mantar is also visible

We took our tickets and went in. The building is strangely two-dimensional; it has one of the most imposing facades one might have ever seen and the building is mostly this façade which looks a like a huge honeycomb dotted with windows. There are five levels and one keeps going higher and higher, to find each level with the beautiful jharokhas and jaalis which allow the winds to pass through the palace uninterrupted, thus bringing it the name. As we reached the top of the building, it offered a great view of the Pink city of Jaipur on one side and on the other, we could see the Jantar Mantar rising above the trees.

While Jantar Mantar is not a palace, it would do grave injustice to Jaipur if we omit its mention when talking about the city. Built in 1800s by Raja Jaisingh, Jantar Mantar is an observatory and like the Mayan observatories, it provides a great insight into the science and astronomy of the Medieval India. The whole complex is a now a sprawled garden with many instruments made mostly of brick and mortar, like a giant sextant, sundials, separate instruments to find the position of each sun sign of the horoscope, instruments to find complex mathematical derivatives like the Azimuth of an astronomical entity and so on. This place is a reality check to the fact that not all what we have has come from the west.

Some photographs from Jantar Mantar .. 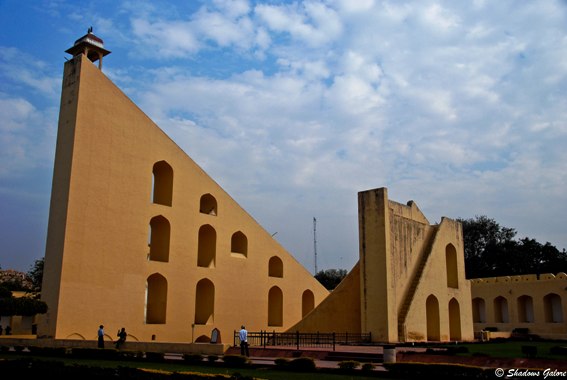 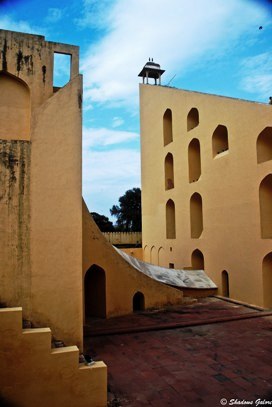 Another view of the Sextant 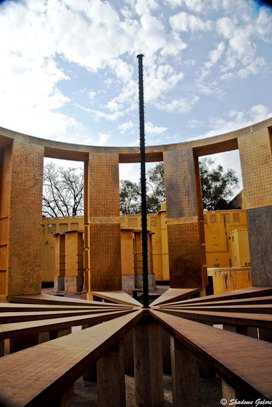 Ram Yantra, used to calculate the Azimuth of Celestial bodies. Go figure that out 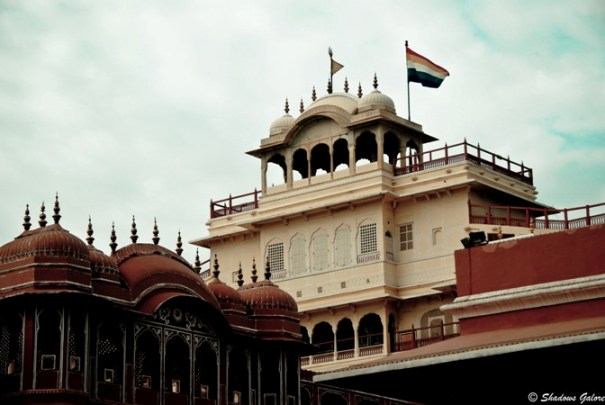 Chandra Mahal, the residence of the Royal Family of Jaipur. Notice the Sawa flag of Jaipur, this means the King was inside the palace

The City Palace of Jaipur is majestic and serves as a museum. A huge courtyard filled with tourist oblivious to the world welcomes you as soon as you enter the series of seven gates.  There are several such courtyard as the Palace is a complex of concentric enclosures providing progressive impenetrability to the residence of the Royals from the public gaze. 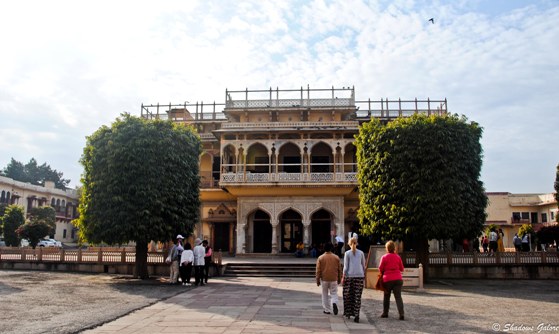 In the first courtyard lies the Mubarakmahal Palace, an intricately carved double storied building built by Sawai Madho Singh, which now serves as the textile gallery, showcasing the dresses lf the kings of the yore. Turning right from here, we came across an imposing gate, known as Rajendra Pol and entered another huge complex called the Sarvatobhadra Chowk which overlooks the Chandra Mahal, the most imposing palace of the complex. On the top, the flag of Jaipur was hoisted meaning the King was inside the residence. This chowk was adorned with another gallery with artifacts from the Rajput era. One exhibit which I liked in particular was a number of muskets arranged in a circular fashion to resemble Sun. 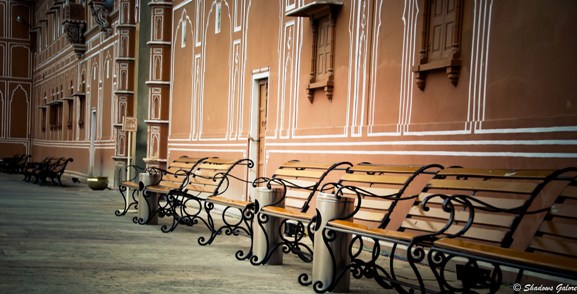 Benches lined up at the quiet Sarvatobhadra Chowk 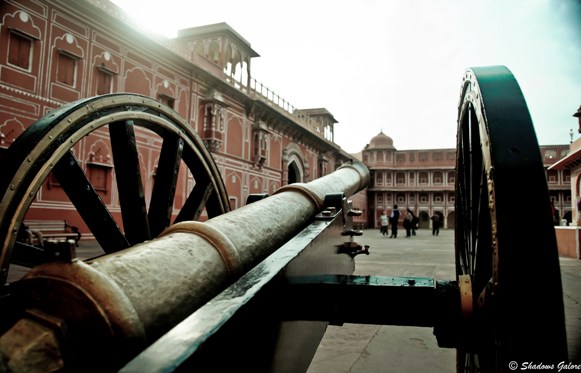 Sun made with Muskets and arrows Arch at Sarvobhadra Chowk, isn’t it beautiful ?

Sarvatobhadra Chowk was a serene place on this Winter afternoon with a sprawling courtyard, benches neatly arranged but very few people sitting and cannons still guarding the gates. As we entered one of those days, we passed through a corridor to enter the last courtyard which was approachable to common Indians like us, chairs were arranged and a Japanese troupe was rehearsing for what seemed to be a musical concert.

The door which led us to the inner courtyard, beautifully crafted like peacocks .. Ekta gives one last pose before we wind up our Jaipur trip ..

This was the last of what we were to see of Jaipur as we had to leave in the evening.

Next Destination: The City of Lakes, Udaipur.

More and better resolution photographs at Jaipur Pink City, a set on Flickr.